I have played Mortal Kombat 9, 10 and 11, I’m a fan of the series but I wasn’t confident in the upcoming live action adaptation. Video game movies aren’t known for succeeding that well, and although the Paul WS Anderson Mortal Kombat movie in 1995 was one of the better video game movies, I wasn’t sure that it would be anything beyond just okay. Despite the mixed reactions, I decided to check it out, and I’m glad I did. It had plenty of issues, but I had fun with it.

Many people expected this already, but the story isn’t great. There are plenty of things that don’t make sense, there’s some conveniences, and there’s a ton of explosion that is given by multiple characters. However I was constantly entertained by what was going on that it didn’t really matter. The first act is introducing characters and the story, and the third act is the climax with a lot of fighting, the weaker link is the second act. During this the pacing suffers and the movie can drag quite a bit. In the movie, a tournament is coming that could decide the fate of earth, so the main characters have to prepare to be Earth’s champions for said tournament. In a sense, that means that this movie is a more of a setup to the coming tournament, which will actually happen in the sequel. It does mean that the climax of this movie does feel like it is missing something at the end, even if it is enjoyable. This movie definitely has sequel bait, however I’m actually interested in a sequel so I guess it works. 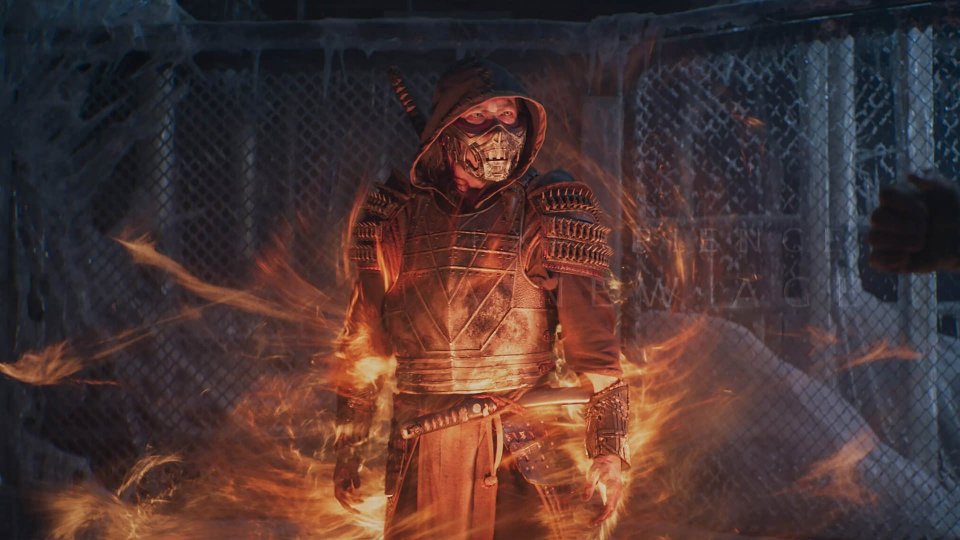 Now about the tone. I can see some people saying that this movie has a dark take and is actively trying to avoid being cheesy. While it certainly is more serious than the 90s Mortal Kombat movies, I was constantly entertained for what it was. So many of the dialogue and moments were so cheesy and silly that it still felt reasonably self aware. There’s so many things that were here that were really silly and ridiculous that for most of the movie, I couldn’t take it seriously (and that’s not necessarily a bad thing). The one confusing aspect with regard to tone is with its opening scene. This scene is a flashback involving the character Scorpion, and it’s actually the best scene in the movie. It is dark in tone, it’s shot and performed greatly. It feels like a genuinely great martial arts movie with some fantasy elements. Then that scene ends, and the tone switches and doesn’t change again. It legit felt like a different director was brought in to do that scene, or that it was from a completely different movie entirely. So in a way that’s a positive and a negative. Mortal Kombat is pretty faithful to the video games they are based on, more so than the 90s film at least. There are plenty of references to the lore, the world and other characters that fans will recognise. There’s also moves, lines and other references which fans will really appreciate. There’s particularly a rather meta joke involving Liu Kang and Kano during a practice fight which I loved. If you’re not a Mortal Kombat fan you could probably still enjoy the movie but you won’t quite get the full experience that fans would have. Also it might just be me, but with some of the absurd things that happen in this movie I just thought that it was very typical for Mortal Kombat, which is why I was willing to go along with them.

The acting for the most part isn’t great, but they are decent, and they were cast to almost near perfection. There’s a surprising amount of iconic Mortal Kombat characters in here, including Sonya Blade, Jax, Kung Lao, Liu Kang, Raiden, and Kano. The villains were also greatly done here with Kabal, Mileena, Kabal, Shang Tsung, and Sub Zero. This movie particularly did a great job of showcasing them, showing off their powers, fighting styles and overall characters and personalities greatly. The standouts out of all of the characters for me were Scorpion, Sub Zero, and Kano. Hiroyuki Sanada isn’t in the movie a ton as Scorpion, but the casting is great and he’s really good when on screen. Joe Taslim as Sub Zero is the closest thing to a main villain for this movie (even though Shang Tsung is really the big bad), and he was a great screen presence. Kano was the biggest surprise though. Josh Lawson is effortlessly entertaining, charismatic and hilarious in this role and a scene stealer for sure. Would love to see him in a Mortal Kombat sequel. There is just one issue with the actors and characters, that being Lewis Tan as the lead character Cole Young. Cole is actually an original character and not from the video games, which is fine if the filmmakers wanted to bring something new to the Mortal Kombat universe. However, he is really the audience surrogate character who is there to ask a whole lot of questions and has a lot of exposition dumped on him. Beyond Tan’s rather average performance, Cole is just not an interesting character. All there is to him is that he has a family he wants to defend, he has some hidden power with him which he discovers by the end, and that’s literally it. There is no other characteristic or personality trait that he has, and he especially suffers when just about every other character is at least memorable in some way.

This movie is directed by Simon McQuoid. This is his first feature film, with his past work being from working on commercials. For a filmmaking debut, it’s decent enough. One thing that does hold the movie back a bit is that the budget is at $50 million which is pretty low for a blockbuster, especially one from Warner Bros. In some ways with the way things are shown, it does feel like a high budget fan film, but I don’t necessarily mean that in a bad way. People are here for fight and action scenes, and they absolutely deliver. They are violent, choreographed well, and energetic and exciting to watch. Speaking about violent, one of the notable differences between this and the 90s movies is the blood and gore, with this version having an R rating. The Mortal Kombat games are known for the over the top level of violence from the fighting and especially the fatalities. This movie has the freedom now to represent that on the big screen. At the same time, it was done with the right balance. It’s definitely a priority to include that, but it didn’t feel forced, and they also knew when to hold back, if only to space them out a bit. So people hoping for some brutal kills will be satisfied here. The visual effects aren’t that great (something brought down by the lower budget), but I thought they were good enough for this movie, especially the ice effects. Something that does bring down the action scenes a bit was the editing. Thankfully it wasn’t in a Taken 3 sort of way where it has 10 cuts within 4 seconds of an action scene. It was more like that sometimes it quickly cuts from one fight to another fight, it does this a bit too much and it just felt jarring. Benjamin Wallfisch composes the score, and while it isn’t as memorable or iconic as the music from the 90s movie, it still works well enough here.

Mortal Kombat is not a great movie, I would not confidentially call it a good movie either. It’s a bit of a mess in many areas including the story and even some of the technical aspects. With that said, I enjoyed it quite a lot. The fight scenes are energetic and satisfying, the Mortal Kombat characters are portrayed well and enjoyable to watch, and the silliness really added to the whole experience. If you are a fan of Mortal Kombat, I do think that you’ll have some fun with this. If you aren’t a fan but enjoy action movies and don’t mind them being a bit messy, I think you’ll at least like some of it. I’m actually looking forward to a sequel, I just hope they learn the right lessons from this movie.