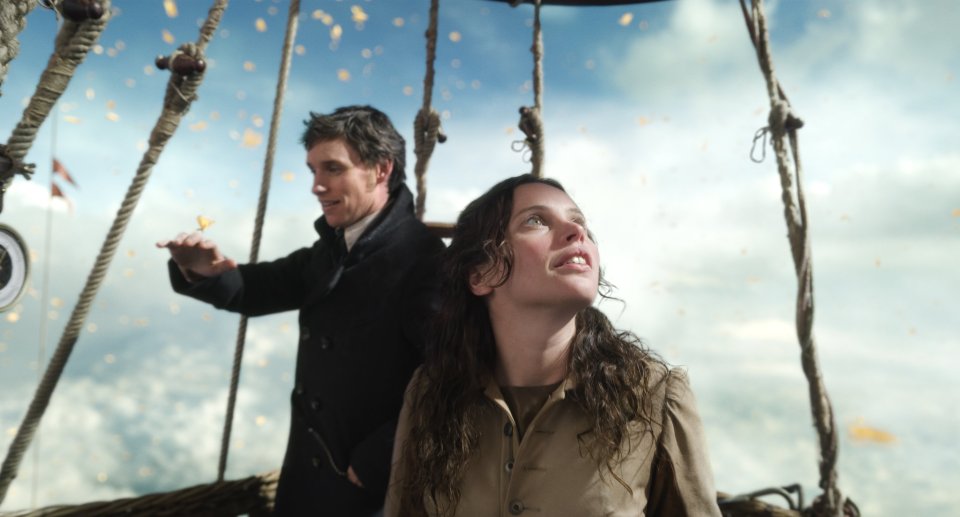 In 1862 headstrong scientist James Glaisher (Eddie Redmayne) and wealthy young widow Amelia Wren (Felicity Jones) mount a balloon expedition to fly higher than anyone in history. As their perilous ascent reduces their chances of survival, the unlikely duo soon discover things about themselves — and each other — that help both of them find their place in the world.

I heard about The Aeronauts for a little while, before going into it I knew it was Eddie Redmayne and Felicity Jones returning as an on screen duo 5 years after The Theory of Everything, and that it had something to do with floating in a balloon. There’s a lot here to like, but it’s held back by certain elements, and it could’ve been a lot better.

Easily the weakest part of the movie is the script. It starts off very rough as it rushes towards the scene main characters leaving on the balloon, with no context or setup whatsoever as to what’s happening. Now the context is then provided through flashbacks, however that’s one of the biggest problems of the movie (if not the biggest), it’s so reliant on flashbacks. When we are on the balloon, The Aeronauts excels, but it comes to a halt every time it does a flashback for both of them back on land, and there’s a lot of them. There doesn’t even seem to be much point in having a narrative structure this way, the flashbacks don’t add anything to the movie. There’s even some scenes showing Felicity’s character being conflicted about whether she’ll even go on the trip, but there’s not even much point given we already know what she decides, not to mention she’s not even a real person, so you can’t put these scenes’ inclusions up to historical accuracy. That’s the other thing too, despite this being advertised as based on true events, don’t look too much into it for historical accuracy. While some parts are accurate like the fact that Eddie Redmayne’s character of James Glaisher did go up in a balloon with someone, that someone wasn’t Felicity Jones’s character of Amelia Wren, in fact she never existed in real life. Come to think of it, embracing it as an inspired but deviating take on the real life story would’ve helped the movie immensely. The movie is an hour and 40 minutes long, which is a good enough length for this story, although the flashbacks did seem to make it feel longer. Outside of the flashbacks, the script and characters did feel fairly weak on their own, merely passable enough.

The duo performances of Eddie Redmayne and Felicity Jones are good and work rather well for the movie. Felicity Jones is really the star of the show, one of the highlights of the whole movie. I like Eddie Redmayne, and I liked him here, but if you’re not a fan of his acting, you’re still not going to like him here because he does the similar acting style.

The Aeronauts directed quite well by Tom Harper. I also saw Wild Rose, and while his work on that was decent, he gets to show off a lot more here. The period of 1860s England is really captured well here, the production design, costumes, etc, all of it really fitted the story and setting. The visuals are great too, and of course it’s mainly to do with the scenes up in the balloon. There are some tense and thrilling scenes during those segments too, and they were filmed very effectively. I can only imagine they were something to really watch on the big screen. The score by Steven Price is also quite good and fits with the movie quite well.

The Aeronauts had potential and indeed they deliver on some of that, however the script unfortunately drags down the movie considerably, especially with the use of flashbacks that only hinder the film. With that said it has some good elements to it that might make it worth checking out, from the duo of Felicity Jones and Eddie Redmayne, to the visuals and the direction. The movie is only 100 minutes long, so if you’ve got that much time to spare, The Aeronauts is a decent enough watch.