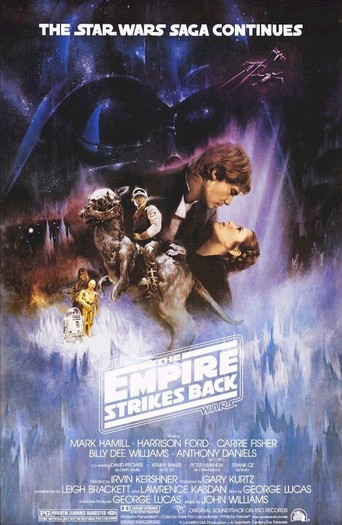 Luke Skywalker (Mark Hamill), Han Solo (Harrison Ford), Princess Leia (Carrie Fisher) and Chewbacca (Peter Mayhew) face attack by the imperial forces and its AT-AT walkers on the ice planet Hoth. While Han and Leia escape in the Millnennium Falcon, Luke travels to Dagobah in search of Yoda (Frank Oz). Only with the Jedi Master’s help will Luke survive when the Dark Side of the Force beckons him into the ultimate duel with Darth Vader (David Prowse).

The Empire Strikes Back has been known as the best Star Wars movie, and for very good reason. It takes the best elements of the first movie and improved them, while taking the story and characters into new territories. Even nearly 4 decades later, it still holds up very well.

This movie is darker than the previous movie for sure, however that’s not the only reason this movie works so well. It doesn’t repeat what the previous movie did, and takes the story and characters on different (and more interesting) directions. I actually don’t have any complaints really with the story or characters. I liked the storyline of Luke going on Dagobah and training with Yoda, I liked Han, Leia, Chewbacca and C-3PO escaping in the Falcon from Imperial forces, and I also really liked the first act battle scene on Hoth and the climax on Cloud City. I’m not one to call movies perfect, but Empire Strikes Back is at least very close to being perfect. I really don’t have too much to say about that aspect.

The cast have improved and grown since the first movie. The biggest improver over the past movie was Mark Hamill as Luke Skywalker, he’s grown quite a lot as an actor and a character. Hamill also really sold the impact of learning that Vader is his father, which of course is one of the most iconic scenes of all time. There’s also Harrison Ford and Carrie Fisher as Han and Leia, who share great chemistry. I found Darth Vader in A New Hope to be just fine, but he’s on another level in this movie, and this movie is where he became great. There’s no Tarkin that he has to follow orders from, outside of the Emperor, he’s really the one in charge, and he’s shown to be really ruthless throughout. The additions to the cast were good as well. Billy Dee Williams was introduced as Lando, and although he’s just in the third act, he does well in his screentime. There’s of course Yoda voiced by Frank Oz, who immediately became iconic upon his first appearance, and he was great as well.

This movie is very directed well by Irvin Kershner. The visuals also mostly hold up pretty well, and there are some spectacular sequences, from the fighters against the AT-ATs on Hoth, to the Falcon flying from TIE fighters, to the final fight between Luke and Vader. That last fight was particularly great, such an improvement over the lightsabre fight in A New Hope. It seems that compared to the other two movies in the trilogy, George Lucas didn’t add so many changes and that was for the better, in fact it seemed the changes helped quite a bit. For example, in the scene with Darth Vader communicating with The Emperor via hologram, they replaced their original version of the character with Ian McDiarmid delivering the lines, who famously played him from Return of the Jedi onwards. Definitely helped with continuity. Also in the scenes taking place at Cloud City, there were windows added in, so it looks a lot better. With that said there was one change to one of the earlier versions which may well have been the worst change of the original trilogy. At the end of the iconic “I am your father” scene, instead of joining Vader, Luke willingly falls down. For some reason in one version, Lucas added in a screaming sound for him, which made it almost like he fell. Thankfully he seemed to have realised that it wasn’t a good idea and removed that bit, which is good because that would’ve actually ruined the scene. John Williams’s score for Empire Strikes Back is even better than A New Hope. The highlight is the new Imperial theme, it was sort of there in the original Star Wars, but in this movie, Williams revamped it into something even more menacing and iconic.

I still feel confident in saying that The Empire Strikes Back is by far the best Star Wars movie. In every other Star Wars movie, even the ones I love, there usually are some clear issues that I have with them. That’s not the case with Empire however, watching it again recently, I couldn’t really find any problems with it.

Fleeing the evil Galactic Empire, the Rebels abandon their new base in an assault with the Imperial AT-AT walkers on the ice world of Hoth. Princess Leia (Carrie Fischer), Han Solo (Harrison Ford), Chewbacca and the droid C-3PO escape in the Millennium Falcon as the Imperials pursue them across the galaxy. Meanwhile, Luke Skywalker (Mark Hamill) and the droid R2-D2 travel to the swamp world of Dagobah to learn the ways of the force from the legendary Jedi Master Yoda after receiving a vision from Obi-Wan Kenobi.

The Empire Strikes back is the best Star Wars movie ever made and also one of the best films of all time. It was a hard act to make a follow up to original, but Irvin Kershner more than manages it. Dark and powerful, it improves on everything that was great in the first movie – it’s overall a masterpiece.

Tone-wise, The Empire Strikes Back is darker than Star Wars but not too dark. The story picks up after the events of the first movie and from start to finish, always interests the audience. The first act is really good and starts off on a great note, it is the invasion of Hoth; the battle is so well put together and filmed and is one of the best scenes in the franchise. There is a particular plot point near the end of the movie that no one could have predicted at the time – which I will not spoil for those few people who haven’t watched this movie yet. If that same thing was repeated in another movie today, it wouldn’t really work, not just because this movie used it; with this movie, it is appropriate and somehow strangely works. The ending also is a little bit of a cliff-hanger. It isn’t like the previous movie with them invading the Death Star but somehow ends up being more satisfying. 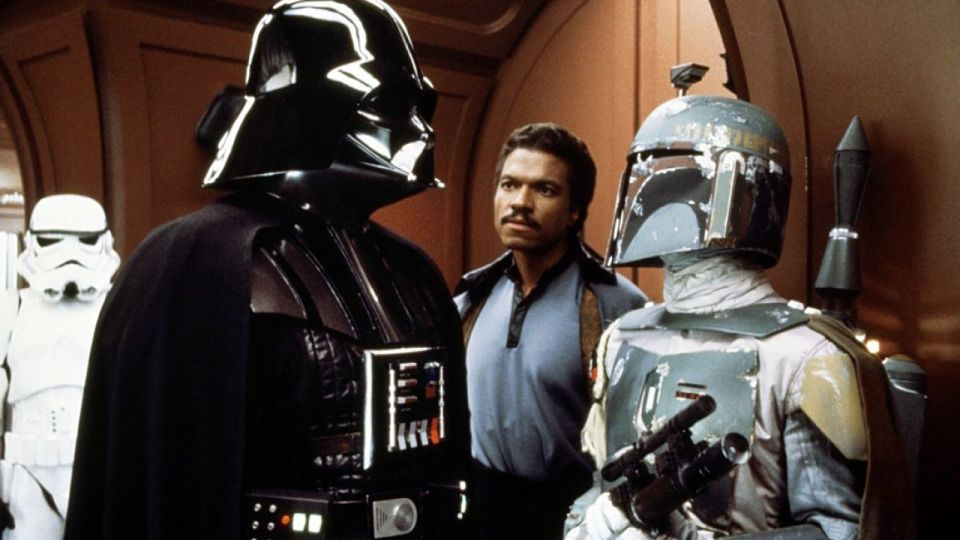 Just about everyone from the previous film returns here. A lot of the characters go through changes – overall they are much stronger characters. Luke is starting to learn about becoming a Jedi. Darth Vader in this movie is also more of a threat than in the previous movie. Harrison Ford and Carrie Fischer have great banter and dialogue between them which are effective, fun to watch and further the characters. The new characters introduced are also well acted, such as Billy Dee Williams in the role as Lando Calrissian; although he doesn’t have that much screen time and not much information is given about him, he is definitely a great addition to the cast. However the supporting character who steals the show is Yoda, played by Frank Oz who is a scene stealer and makes the character so special. Oz actually manages to go beyond Yoda being a puppet, and has successfully made him a character that really lives and breathes.

The special effects are similar to Star Wars but end up being slightly better. The film takes a variety of locations, from the ice planet of Hoth, the swamp planet Dagabah and many others. John Williams’s score here continues to impress. The song that stands out the most is the Imperial March which is mostly used for Darth Vader; it gives such a dark and powerful vibe and in my opinion it is actually better than the original main theme of Star Wars.

The Empire Strikes Back isn’t just the best Star Wars movie; it’s also one of the greatest films of all time. It improves on every element, from the acting, to the effects, locations, art directions and even the writing. It is up there with movies like The Godfather Part 2, Aliens and Terminator 2 as brilliant sequels that are better than the original. Absolutely brilliant, the Empire Strikes Back is a fantastic film in every way.