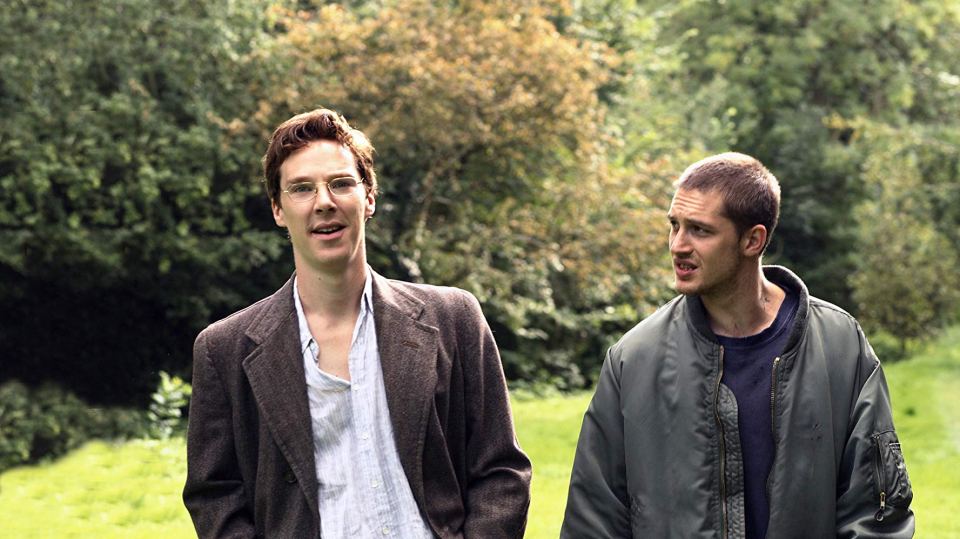 Stuart (Tom Hardy) is a homeless alcoholic who leads a complicated life because of the disturbing memories of his troubled childhood. His writer friend (Benedict Cumberbatch) chronicles his life and tries to recount every aspect of it.

I only found out about this movie more recently, the main thing I heard was that Benedict Cumberbatch and Tom Hardy were in it, with the latter giving a particularly fantastic performance. I also knew it was a tv movie, and I really didn’t expect much from it (didn’t really know what to expect honestly). Stuart: A Life Backwards was actually better than what I expected, an emotionally honest film, with an outstanding lead performance.

Stuart: A Life Backwards is based off the biography of the same name. While the story takes place in chronological order, we learn about Stuart’s past in reverse order, like the title of the story implies (and how it was told in the book). This makes for a rather interesting watch as we learn about this man’s life, and what put him in the position that he was in present day. Without getting too deep into it here, A Life Backwards doesn’t shy away from everything that happened with Stuart and the things he does and went through, but the best compliment I can give is that it’s remarkably honest. There is a fair amount of humour thrown in (especially with some interactions between the main two leads), but it is emotionally impactful at the same time. The movie is around 90 minutes long, and the pacing is a little uneven. It drags at points and sometimes feels rushed in others, however I was still rather invested. This movie is mainly focussed on its two lead actors, Tom Hardy and Benedict Cumberbatch, and both really work in their respective roles. I’ll start with Cumberbatch, who is more the audience surrogate, as he’s playing the author of the biography that the movie is based on. The movie focuses on his interactions with Stuart. We don’t really get to learn about his role of real life person Alexander Masters, and he’s definitely not the main focus of the story, but Cumberbatch still manages to act very well (in a comparatively more subtle way than his co-lead) and also deserves some praise for his own. However, it’s of course Tom Hardy who stands out among everything in this film, giving such an emotionally raw performance and steals every scene he’s in. This might well be his most difficult performance, but it pulled it off excellently. This is some of his best acting, and knowing his long list of great performances, that’s saying a lot. The chemistry between Hardy and Cumberbatch is great and believable, with the friendship between the two driving the movie essentially. It is also nice on another level watching them, especially knowing how known they are as actors now.

Now Stuart: A Life Backwards is very much a tv movie, it doesn’t have a very big budget, and you feel that throughout. However, it still does some effective things with the direction by David Attwood, not to mention it just feels right for this specific movie. There are some brief moments of animation that may seem out of place, but I think worked well enough for the unconventional style and subject of the story.

Stuart: A Life Backwards won’t be known by most people, but I really do think it’s worth watching. It’s a pretty good movie by itself, the story is handled with care and told as it should. However, it’s Hardy’s performance which brings it to a whole other level, making it pretty much essential viewing. It might be hard to gain access to a copy of A Life Backwards, but definitely watch it when you get a chance, it’s well worth it.