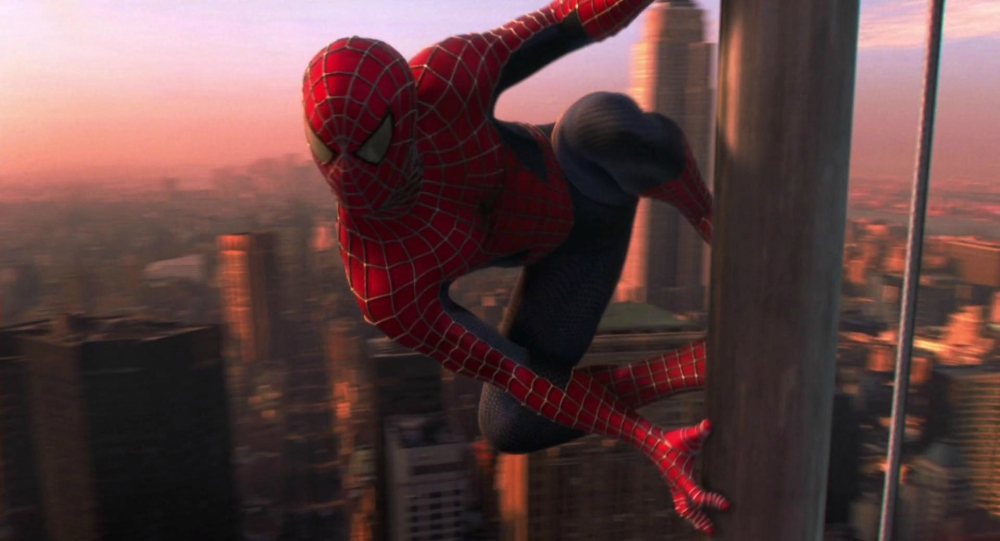 “Spider-Man” centers on student Peter Parker (Tobey Maguire) who, after being bitten by a genetically-altered spider, gains superhuman strength and the spider-like ability to cling to any surface. He vows to use his abilities to fight crime, coming to understand the words of his beloved Uncle Ben: “With great power comes great responsibility.”

With Spiderman Homecoming coming in under a couple months, I decided to check out all the Spider-Man movies. Honestly, I dreaded rewatching the first movie, because it seemed really cheesy and didn’t hold up that well, I had a feeling that I wouldn’t really like it. I was actually surprised at how much I liked it. It is very entertaining and well put together by Sam Rami. Not all of it holds up, but some of it surprisingly does, it’s enjoyable at the very least.

The first thing I noticed about Spider-Man is that the story moves at a surprisingly fast pace, Peter Parker gets bitten by the radioactive spider and earns his powers in the first 5-10 minutes. In a way, the fast pacing does work, it’s just a little jarring seeing a comic book movie (especially for an origin story) to move this fast. One downside to this is that I wasn’t really that invested in the story. After Peter becomes Spider-Man, it then becomes a standard comic book movie, it’s nothing really that special, it’s just a reasonably entertaining comic book movie (not that this is a bad thing though). The movie is very easy to follow, and its very difficult to get bored in. Now a part of the movie which is obvious looking back at it now is that it is very cheesy and campy, with some of the ideas, dialogue and decisions made. However, there is a bit of a charm to it, so I can’t say that it bothered me too much… it only bothered me occasionally. Most of the dialogue is cheesy and some of it is kind of stupid and hard to take seriously at times, especially when it comes to the romance between Peter and Mary Jane. The way that the movie handles the Green Goblin was very hit or miss, not just the way they took his character, but the dialogue and all that, way too over the top, couldn’t take him seriously as a villain for most of the movie. But I’ll get into that later. Overall, Spider-Man’s plot is generally good and fast paced, entertaining but nothing special, you’ve all seen this type of comic book movie before.

Tobey Maguire is really good as Spider-Man, he perfectly delivers on the geeky side of Peter Parker, and is quite likable in his role. With that said, he wasn’t always great, but that’s to do with the writing. After Uncle Ben’s death and after he becomes Spider-Man, his character development seems to almost stop. In 2 and 3 he is given more to do. I didn’t feel that he was quite a 3 dimensional character yet, but he still worked well for the movie. Kirsten Dunst is Mary Jane Watson, Dunst is a great actress but in these movies, she’s sadly not given much to work with, especially this movie. Her character isn’t really that great, and the awkward dialogue between her and Maguire makes it hard to see any believable chemistry. But she does the best she can. Willem Dafoe is Norman Osborn/Green Goblin and I have to say that is one of the best comic book movie casting decisions ever made. As for what I think of the performance itself… I have mixed feelings. I know plenty of people love Green Goblin in this movie, but I won’t lie, I’m not a big fan of him. I really liked Willem Dafoe when he was Norman Osborn. However when he’s Green Goblin he goes really over the top, and it’s just hard to take him seriously (especially when he’s in the Goblin suit). He’s literally singing “Itsy bitsy spider”, saying cliché 1960s era villain lines, all the things that comic book movie villains do and say. Even as Norman, he has some goofy moments when he is talking to himself in the mirror or literally talking to the Goblin mask (which is just sitting on a chair and the Goblin voice is coming out of it), it’s hard to not find these scenes unintentionally hilarious. It wouldn’t be so bad except it feels like the film wants to take Goblin seriously as a villain, most of the time he just comes across as a Power Rangers villain. I’m not at any point intimidated by him, I find him ridiculous. I will say at the very least, Dafoe seemed to be having an absolute blast going absolute nuts. And to be fair, Goblin does get a couple great scenes, one on a rooftop, and the other is the final fight with Spider-Man. We also get supporting performances from James Franco, J.K. Simmons and others which were also pretty good. And we get a Bruce Campbell cameo, which is always great. 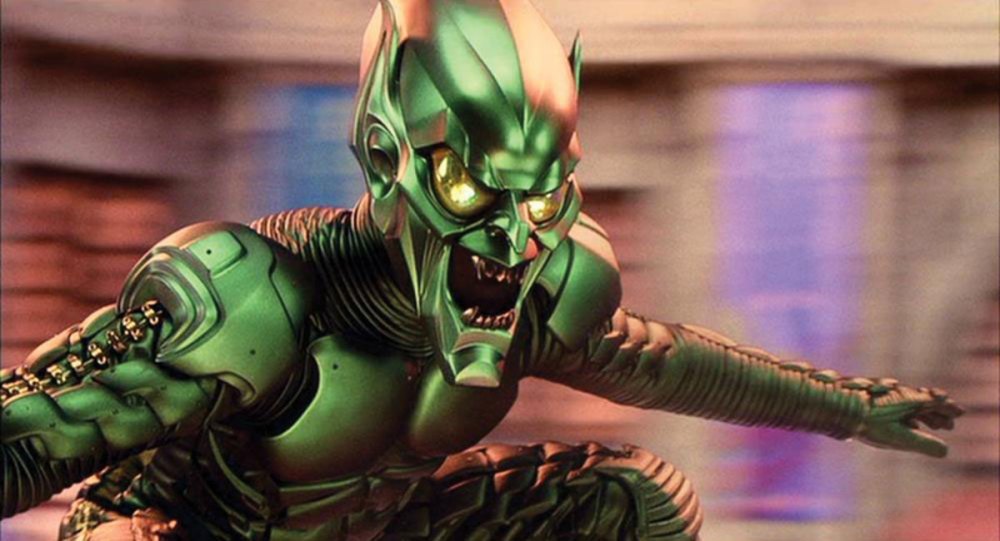 A lot of the CGI hasn’t held up well and in most of the big action scenes, Spiderman and Green Goblin look very rubbery and fake, and at times it looked like it was a videogame. The action itself is pretty well filmed. With that said, most of the action wasn’t that great, nowadays it looks a little goofy and was a little underwhelming, (the action in the sequels definitely got better though). The last fight scene however is surprisingly brutal and intense, it was a very effective end action scene, that was definitely the best action scene in the movie. I will say, seeing Spiderman swinging around is always great to see, along with some other sequences like with the Spider-sense, that was also handled vey well. I liked the design for Spiderman’s costume, while the CGI for it wasn’t always the best, the design itself worked well, it never felt cartoonish, I could take it seriously. Green Goblin’s costume on the other hand…. was very cartoonish. He looks like a Power Rangers villain, not a Spider-Man villain, it’s just hard to take him seriously when he looks like that. Then again, I guess the costume matched the performance.

So, 15 years after it’s release, does Spider-Man hold up? The answer is yes and no. It’s easy to understand why Spider-Man had such a huge impact on the comic book movie genre. Spiderman (especially back then) isn’t an easy character to bring to the big screen, huge props to director Sam Rami. It’s not a perfect movie, the fast pace did lessen my investment in the story, it has some cheesy elements which don’t hold up (especially with regards to the Green Goblin) but at the same time there’s a real charm to it that makes most of these moments enjoyable. It is an entertaining movie at the very least.