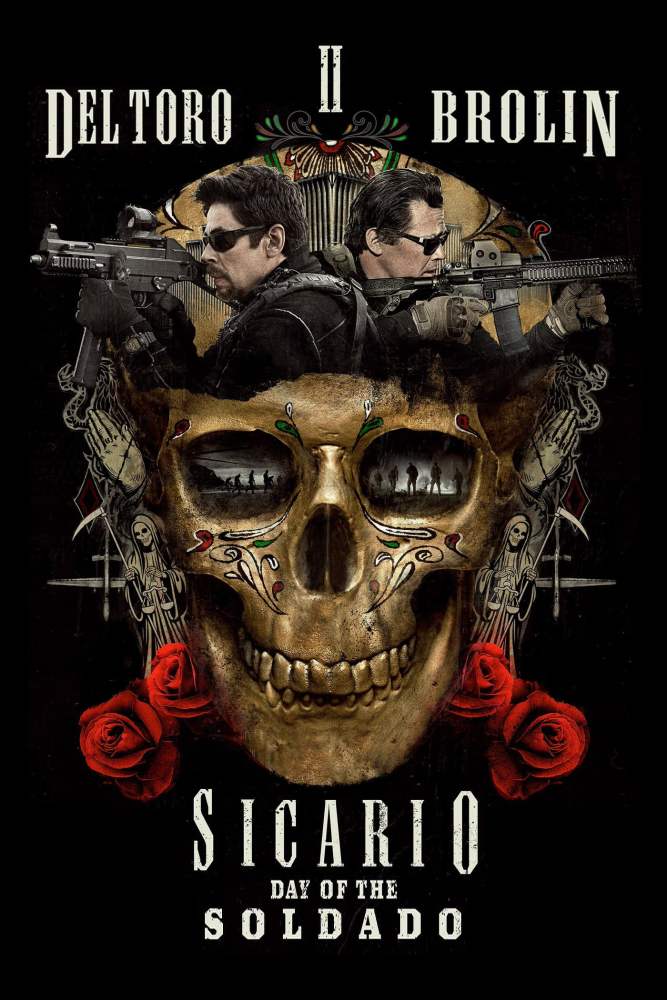 FBI agent Matt Graver (Josh Brolin) calls on mysterious operative Alejandro Gillick (Benicio del Toro) when Mexican drug cartels start to smuggle terrorists across the U.S. border. The war escalates even further when Alejandro kidnaps a top kingpin’s daughter (Isabela Moner) to deliberately increase the tensions. When the young girl is seen as collateral damage, the two men will determine her fate as they question everything that they are fighting for.

Sicario: Day of the Soldado was one of my most anticipated films of 2018. Sicario was one of the best films of 2015 and I liked it even more upon my second viewing, however I had mixed feelings about a sequel to Sicario. Although actors Benicio del Toro and Josh Brolin and writer Taylor Sheridan were returning, actress Emily Blunt, director Denis Villeneuve and cinematographer Roger Deakins weren’t returning. Also, I just couldn’t see how a sequel to Sicario could be done, it seemed so much like a standalone movie that it didn’t feel like more could be done with the story. Every movie that Taylor Sheridan has written for however has turned out great, so I gave it a chance. Having seen it, I have to say that Sicario: Day of the Soldado was one of the biggest surprises of the year so far. Aside from the lack of Denis Villeneuve and some of the pacing at the beginning, Soldado has a compelling story and great performances, putting it close to being on par with the original Sicario.

Soldado is just as bleak and ruthless as the first movie, a particular scene in the first 10 minutes really sets the tone for the rest of the movie. This really does feel like a continuation of the first Sicario and not some very distant and barely resemblent cousin. At the same time, it’s not a cheap clone of the original. One the best parts about Soldado is that is has quite a different story to Sicario, while both movies involves cartels, the first movie is about drugs and the latest is about terrorism. Rewatching Sicario somewhat recently, I also noticed that it had a very straightforward and focussed story. Soldado on the other hand is much more complex and less conventional. It effectively shows the impact on everyone and there is very little black and white here, just a lot of grey areas. It also feels like on a much larger scale. Soldado does show off more of del Toro’s Alejandro and Brolin’s Matt (given that they get more screentime now that they are the only two main characters), which means we get a better sense of their characters. I’ve heard some say that certain parts about them, certain decisions they make, feel a little out of character for them, especially compared how ruthless they were in the first movie. First of all, its Taylor Sheridan who wrote this, so no one knows these characters better than him. Second of all, I didn’t find it that jarring, we are seeing more sides to them. They still aren’t particularly good people and they still do some horrible things to achieve their goals, its just showing more sides to them that we didn’t see before. The way that things are left at the end of the movie is pretty much set up for a sequel, so a lot of the way certain things are done here will depend on how it’ll be done in the third movie. The movie is about the length of the original Sicario, about a few minutes longer. Aside from the early moments of the film, I felt that Soldado moved noticeably faster. Not that Sicario was unbearably slow or anything (even though it was slower paced), its just I felt that Soldado was paced better. There aren’t too many problems I have with the movie. The beginning is a little slow, after the first 20 minutes however it really picks up. There also might also be one or two implausible moments most of it like the first movie is still pretty set grounded in reality, but the moments that seem a little unrealistic do stick out. The sense of dread that was so prevalent in the original Sicario is not apparent as much here, though it might just be because it’s a different type of story. Also, while I’m not sure if this is an actual problem, you do feel the lack of Emily Blunt’s Kate Macer, who served in the first film as almost an audience surrogate, someone with high morals that you can root for with most of the other main characters (del Toro and Brolin) not exactly having them. So for some, Soldado might be lacking something but for this story, it worked fine enough. I’d like for her to return in the inevitable 3rd Sicario movie though. The biggest standout problem however was the ending. While the last moments of Soldado will prove to be divisive in terms of realism, I could somewhat handle it. It’s the last scene that really doesn’t work, it is so blatant sequel bait that it feels really out of place, almost like it was studio mandated and not written by Sheridan himself. Had they just removed that last scene, it could’ve been ended perfectly.

The acting is all around great, with the main two leads giving fantastic performances once again. With the main characters just being Benicio del Toro and Josh Brolin, they get a lot more to do than in the previous movie, and we get to see a lot more of them, del Toro’s character of Alejandro especially. Alejandro in the Sicario movies is one of Benicio’s best roles and in the sequel he’s even better. Another good performance is by Isabela Moner as the daughter of a kingpin that del Toro and Brolin kidnap in order to initiate the war between two cartels.

With Soldado, you really feel the lack of Denis Villeneuve. However, when I say this I don’t mean to badmouth the direction of this movie, Stefano Sollima’s handling of Soldado is actually quite good, and there isn’t particularly anything about it that I could consider to be flawed. It doesn’t look as good as the Roger Deakins filmed Sicario, but Soldado still looks pretty good, with the cinematography by Dariusz Wolski being quite effective and good looking. Despite the trailers making the movie out to be much more ‘action packed’, the level of ‘action’ is about the same level as with Sicario. As with the original, these sequences aren’t really action scenes, they are bursts of thrilling, tense and grim violence that don’t actually last for very long that are heavily set in reality, you don’t watch them for entertainment. Sicario composer Johann Johansson sadly passed away earlier this year, so for Soldado we have Hildur Guðnadóttir as the composer (who also worked on the first Sicario as a cello soloist). The score is a little different to the original film’s but it is similar in tone and is quite effective.

Sicario: Day of the Soldado is actually one of my favourite movies of the year, with its performances and the complex story by Taylor Sheridan being the highlights. How it compares to the original remains to be seen as I’ll probably need to give it a rewatch before I can say, but they are closer in quality than I thought they would be. I’m on board for a third and final Sicario film, Sheridan clearly is moving this story and these characters in a particular direction and I’d love to see what he has planned.