In 1938, after his father Professor Henry Jones Sr. (Sean Connery), goes missing while pursuing the Holy Grail, Professor Henry “Indiana” Jones Jr. (Harrison Ford) finds himself up against Adolf Hitler’s Nazis again to stop them from obtaining its powers.

The main Indiana Jones trilogy is one of the most iconic cinematic trilogies of all time. After Temple of Doom, Indiana Jones goes back to familiar territory with the third instalment with The Last Crusade, but this leads to possibly the best movie in the entire series (at least close to it). Everything from the writing, direction and the performances are great, it is really entertaining and among my favourite movies.

The movie starts off on a high note with its introduction featuring a young Indiana Jones played by River Phoenix, and it only gets better from there. It keeps you constantly entertained from beginning to end with a great adventure that never has a dull moment. With that said it, it really picks up in such a massive way from the moment that Indiana Jones meets with his father, then it’s pretty much perfect all the way right to the very end. It is also the funniest of the movies by far, with some effective comedy that hits every time, and never gets annoying like how it got to at many points in Temple of Doom. Even the slapstick really ends up being quite funny. The biggest source of comedy in this movie as I’ll get into later is the interactions between Jones and his father. One thing with Raiders of the Lost Ark is that the third act while not bad wasn’t quite as strong as the rest of the movie. The climax of The Last Crusade on the other hand is creative and exciting, and by far the best of the series.

Harrison Ford is effortlessly great in his role of Indiana Jones, as to be expected. He sells every part of the character well, including the action and the comedy. Sean Connery was great as Jones’s father in one of his best performances (possible his best). It’s an unexpected casting considering Connery’s past roles with the likes of James Bond, but he works perfectly in here and was a perfect contrast to Ford. The dynamic and chemistry between these two just works excellently, which is good because they are a big focus of the movie from the first act onwards. The rest of the cast are good, including returning actors from the first movie with Denholm Elliott and John Rhys-Davies, and the main villain played by Julian Glover. It’s also worth noting that River Phoenix plays younger Indiana Jones for less than 10 minutes, but yet he played that part pretty much perfectly in his screentime. 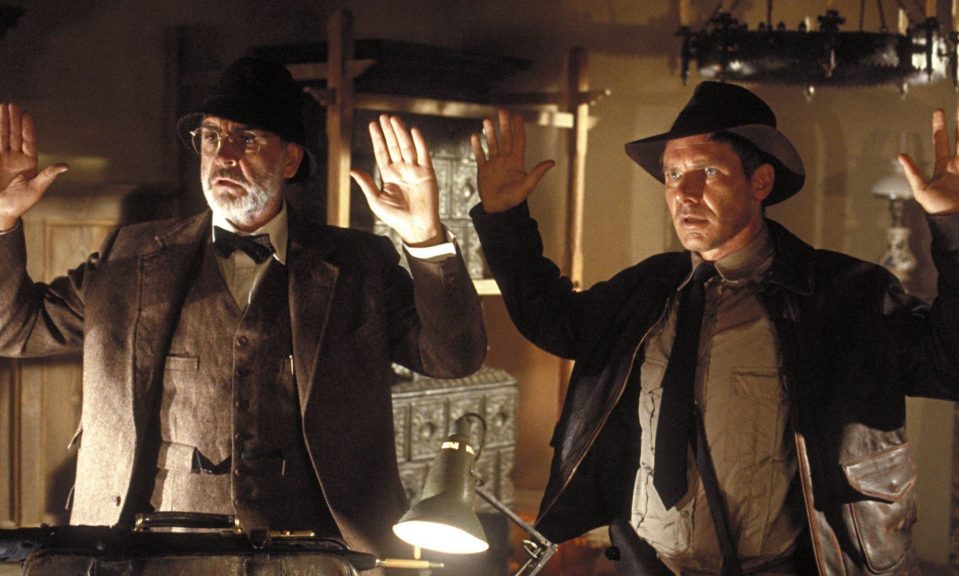 Steven Spielberg’s direction was great, it’s got a very good look throughout at the various locations. There are some great set pieces from start to finish, in great locations. From a boat chase through Venice, to a tank battle with Nazis, all of these set pieces are fantastic, and are even just slightly a step above the action from Raiders of the Lost Ark (and that’s saying a lot). The score by John Williams was great as to be expected, it’s more upbeat and triumphant compared to the other scores in the series, and it’s very memorable.

My favourite Indiana Jones movie jumps between this and Raiders of the Lost Ark, for now I’ll put them on the same level. The direction is great, it is witty and entertaining from beginning to end, Harrison Ford and Sean Connery are excellent, and overall it very well balanced. This and Raiders of the Lost Ark are firmly among my favourite movies, and are definitely worth watching (as is the whole series).