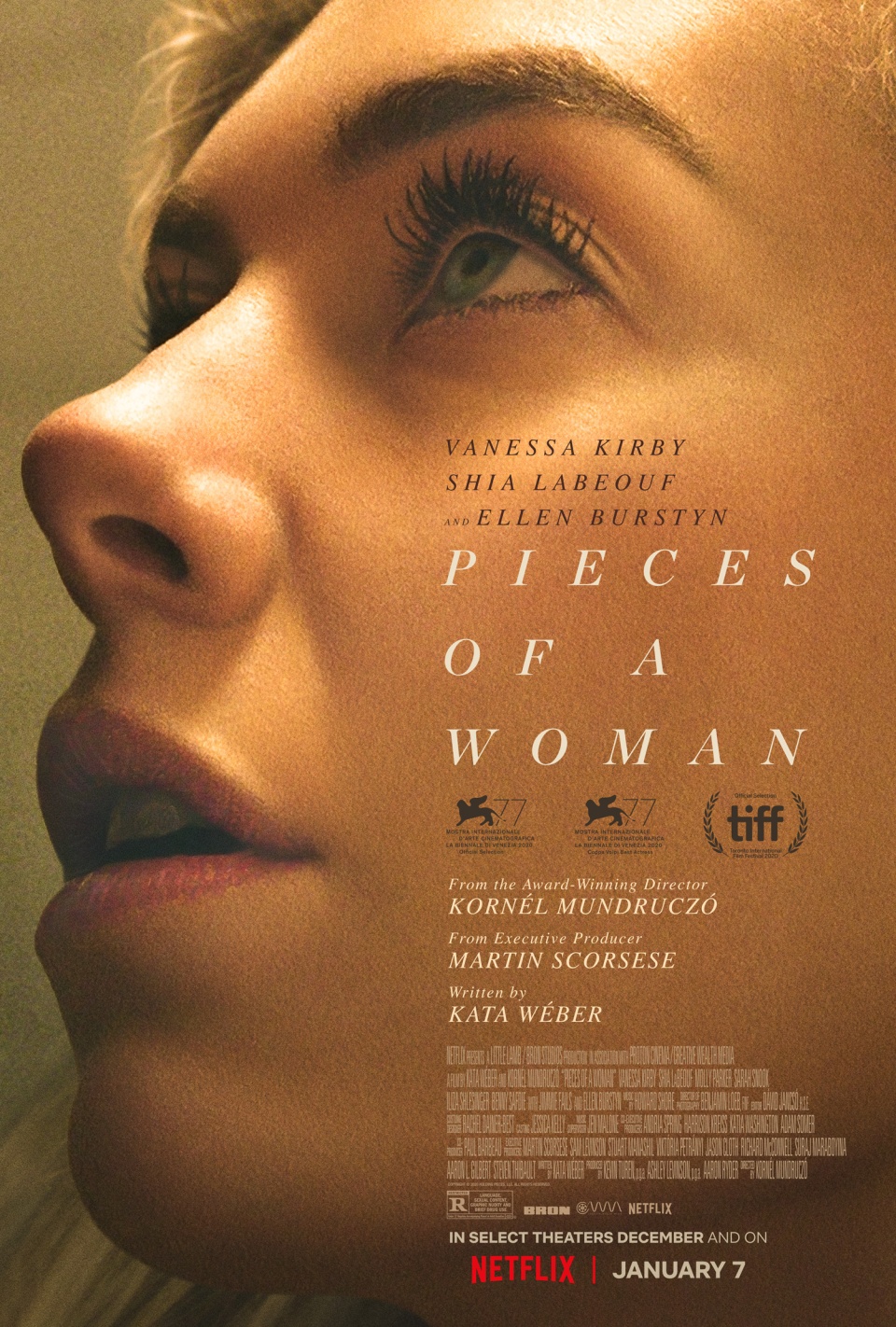 Martha (Vanessa Kirby) and Sean (Shia LaBeouf) are a Boston couple on the verge of parenthood whose lives change irrevocably when a home birth ends in unimaginable tragedy. Thus begins a yearlong odyssey for Martha, who must navigate her grief while working through fractious relationships with her husband and her domineering mother (Ellen Burstyn), along with the publicly vilified midwife, whom she must face in court. A deeply personal, searing, and ultimately transcendent story of a woman learning to live alongside her loss.

I heard about Pieces of a Woman mainly with regards to awards hype, especially with the lead performance from Vanessa Kirby. I wasn’t really expecting much from the movie beyond that aside from some positive reactions, and that it was being released on Netflix. Pieces of a Woman is a solid enough movie. It definitely could’ve been a lot better, but there’s enough here to make it worth checking out. The first act is quite intense as it portraying a childbirth, and everything from the acting to the directing is outstanding in this. It’s by far the most talked about moment in the whole movie and is probably what the film would be largely known for. The movie peaks early with its 20 minute long take of childbirth, however this moment was essential to really put the audience through it and understand the depth of trauma and grief that goes on. So it was kind of inevitable that the rest of the movie wouldn’t reach those heights again, nonetheless I feel like it could’ve been a little better. The rest of the movie is about the after effects and the grief that follows that first act, it’s really a movie that you’re gonna want to watch only once, as it isn’t easy to watch. The movie has a lot of loud bombastic moments of shouting and crying, as well as monologues that not only makes the film feel overdramtised and awards baity, it feels rather hollow and doesn’t have much impact. Also, the film is very predictable, you have a good idea of where it is going, not that it’s the main issue. It’s just that the story and premise aren’t approached in a very interesting way. It could’ve explored much of the relationships between characters but it doesn’t really. The film is seemingly more of a character study centred on the lead character of Martha but it’s somewhat distant from her, so it’s in a bit of an odd spot for the narrative. I really wish the film focused more on the lead character’s individuality and really allowed her to fully explore its themes of loss and grief. For a story that is trying to be intimate, it didn’t feel intimate. Outside of Martha, there are some forgettable characterisations. I have heard some people take issue with some of the odd decisions made by the characters, but they didn’t read to me as tone-deaf or bizarre. They felt completely to real life, it’s just that the characters themselves aren’t particularly well developed or defined. Storywise it does become drawn out, and it doesn’t pick up steam until a little later in the second act. I will say that it did conclude well with the third act and the ending. I wish the middle chunk of the movie was on the same level as its beginning and ending.

While the acting from everyone is good, this is really Vanessa Kirby’s film, and she’s outstanding in the lead role. I think that Kirby should’ve been given more moments to shine, but she nonetheless gives perhaps one of the most evocative and resonant performance of the past year. She seems to be the only character written with layers because her delivery conveys a lot of the emotions and suffering that she’s going through with a lot of nuance, where everyone else is a surface-level understanding of grief. That’s particularly impressive considering that the character is written in quite a distant way. The rest of the supporting cast are good, including Sarah Snook and Benny Safdie. Ellen Burstyn is great, she is in a somewhat one note role as Martha’s mother, but is able to deliver some powerful moments and fills the story out with her performance and definitely makes up for it.

The movie is directed by Kornél Mundruczó and I think he did a good job. It’s a tightly directed and shot film, with vital visual elements and compositions, I liked the look of the movie overall. In fact, some aspects of the direction and the editing seem to be more effective with visual moments than some of the actual writing. The long takes are particularly great, especially for the childbirth sequence in the first act. Now looking at that whole scene, it’s pretty clear that not all of it was in one shot as there are some things that happen that would be impossible to do in one complete take. With that said, most of it looks like it was in one shot, and that in itself is impressive.

Pieces of a Woman is a good movie with great elements but also isn’t as good as it could’ve been. The attempt to look at grief is admirable, but doesn’t explore it well enough. The subject matter and the tone already make it somewhat hard to watch but it’s also hard to be invested when the approach to it isn’t particularly engaging, especially with the writing. With that said, it’s directed well, and some impressive scenes and great acting, especially a fantastic Vanessa Kirby, whose performance alone makes Pieces of a Woman worth watching.