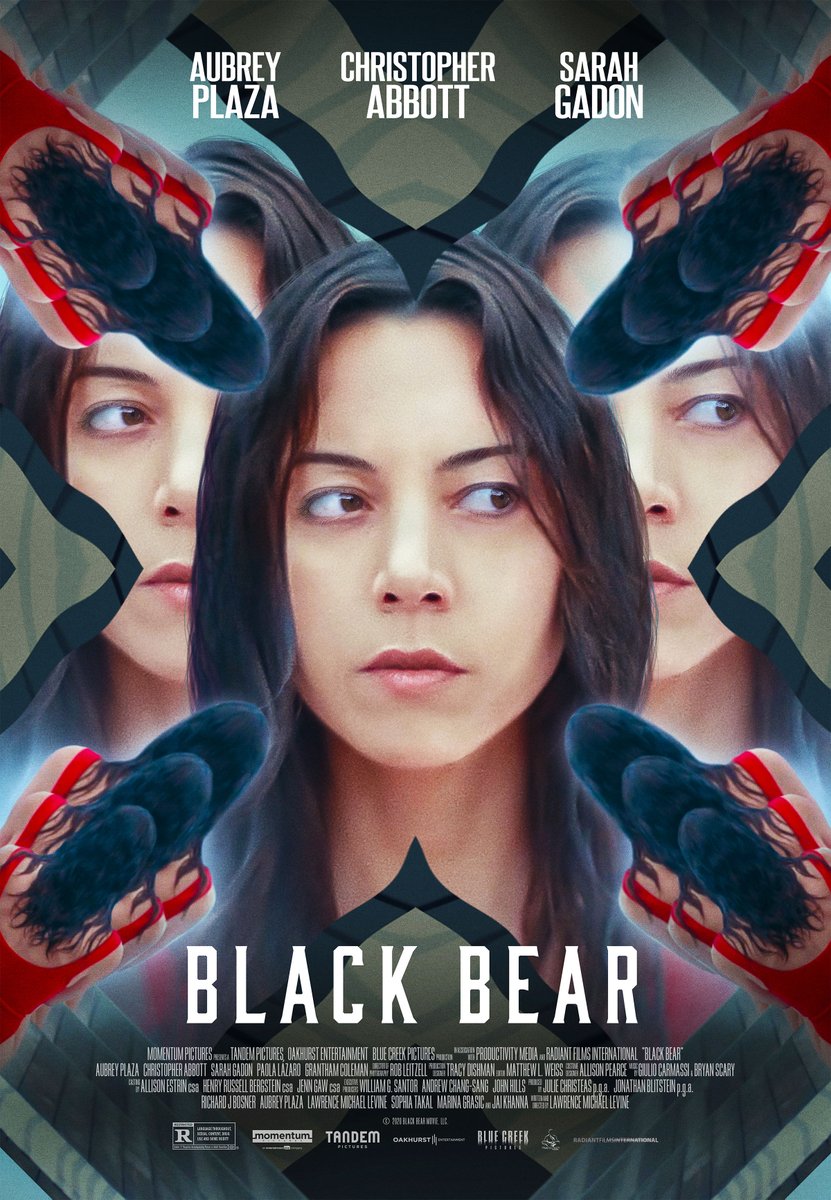 A filmmaker (Aubrey Plaza) at a creative impasse seeks solace from her tumultuous past at a rural retreat, only to find that the woods summon her inner demons in intense and surprising ways.

I didn’t know much about Black Bear going into it. All I knew that it was a sort of thriller with some unexpected twists, it starred Aubrey Plaza in the lead role, and it had been receiving some pretty positive responses. Black Bear wasn’t quite what I expected it to be, but I liked it quite a lot, it was great.

I can’t talk too much about the plot, otherwise I’d give too much away, and I really do recommend going into Black Bear as blind as possible. What I can say is that I liked the first act with its initial premise about a filmmaker in a cabin along with a couple. I liked the atmosphere, I liked the interactions that the three characters had, and I was interested to see where it was all leading towards. There’s a certain point in the movie where it takes a distinct turn to say the least. Some other reviewers have been openly talking about that aspect, however for the sake of your viewing experience, I’m going to hold back on that. I’m also not going to go into much of the themes that the movie touches upon. What I can say was that it was quite surprising, and I wasn’t expecting it. Now, I do think the turn was good and I was on board with it. However, it was also a lot to take in, it does admittedly detach you from the narrative, and as a result it loses a bit of its momentum following from that point onward. Also, it does feel like it is missing something towards the end, like it needed another section to tie everything together. With that said I have a feeling it was leaving room for interpretation, because that seems to be what the ending was going for. I’m not exactly sure what the ending was implying but I’m interested in reading peoples’ interpretations. One thing about this movie is that it is very meta and the line between fiction and history is blurred, and when the film takes its turn, whether or not it works for you will make or break the movie. The dialogue is nothing short of chaotic and razor sharp, with some very memorable lines throughout. As said previously, there is an effective atmosphere and uncomfortable tension throughout the movie, you do feel uneasy and it has you riveted. 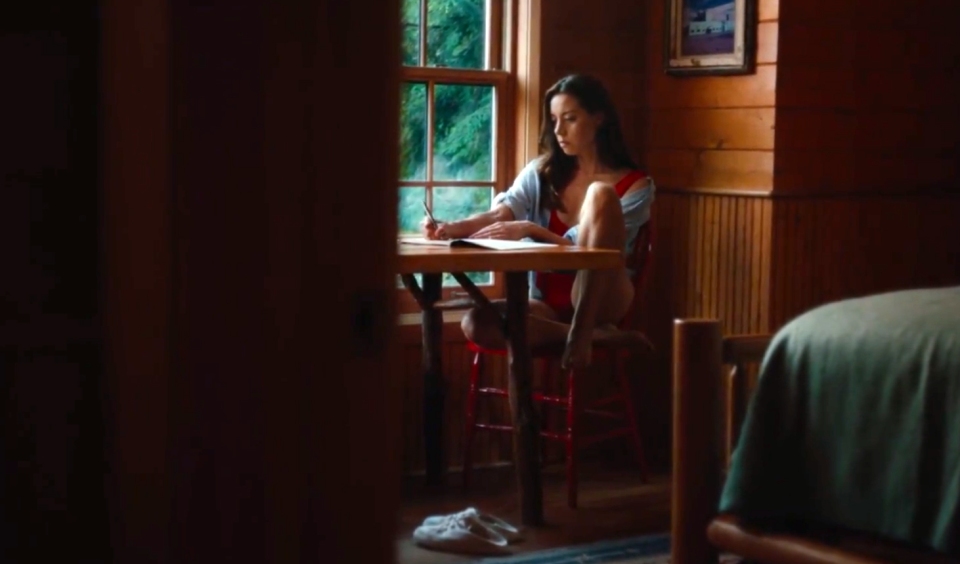 The acting is great, but it’s really Aubrey Plaza who is the standout in the lead role. Her performance is nothing short of captivating and intense. She delivers the dialogue expertly and emotes greatly with whatever her character is doing or feeling. This might be the best acting work I’ve seen from her, and she was already fantastic in Ingrid Goes West. The supporting cast are good too, especially Christopher Abbott and Sarah Gadon who deliver some great work here that shouldn’t be overlooked. However, it really is Plaza’s movie through and through. 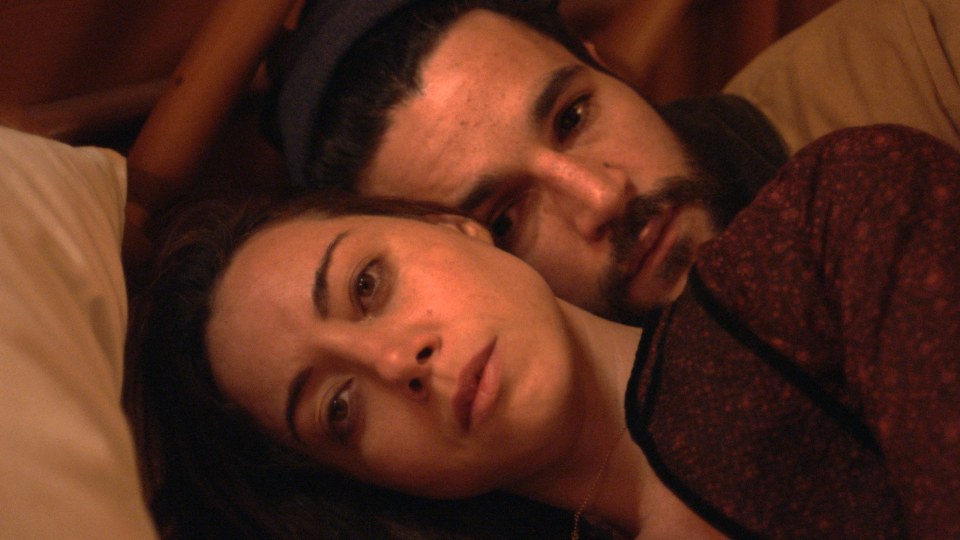 Black Bear is directed by Lawrence Michael Levine, and his work here is great. It’s quite beautiful to look at, and the way everything is shot with the intense camerawork gave the film a dynamic and real feeling throughout. The use of handheld was particularly effective. The sound design is great and sharp. The bleakness of its cinematography and the haunting score both matched the tone of the movie, and really helped to create a foreboding sense of dread.

Black Bear is an mindbending, unexpected and well directed drama thriller, with effective tension, and some great acting from everyone. To a degree I’d say that it’s not for everyone, but even if it doesn’t completely work for you, it’s definitely worth watching for Aubrey Plaza’s performance alone. 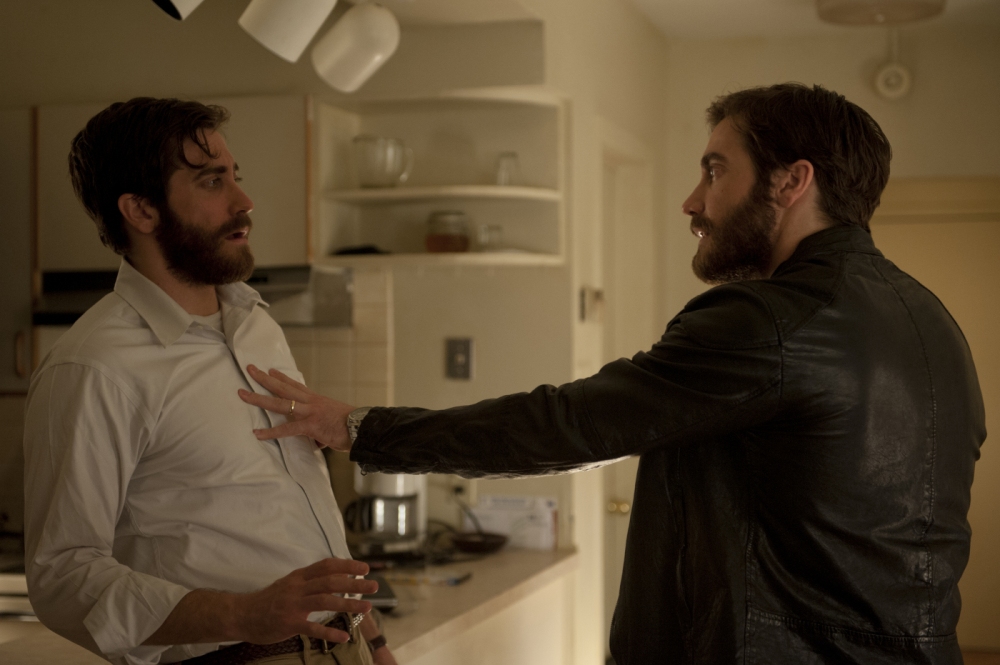 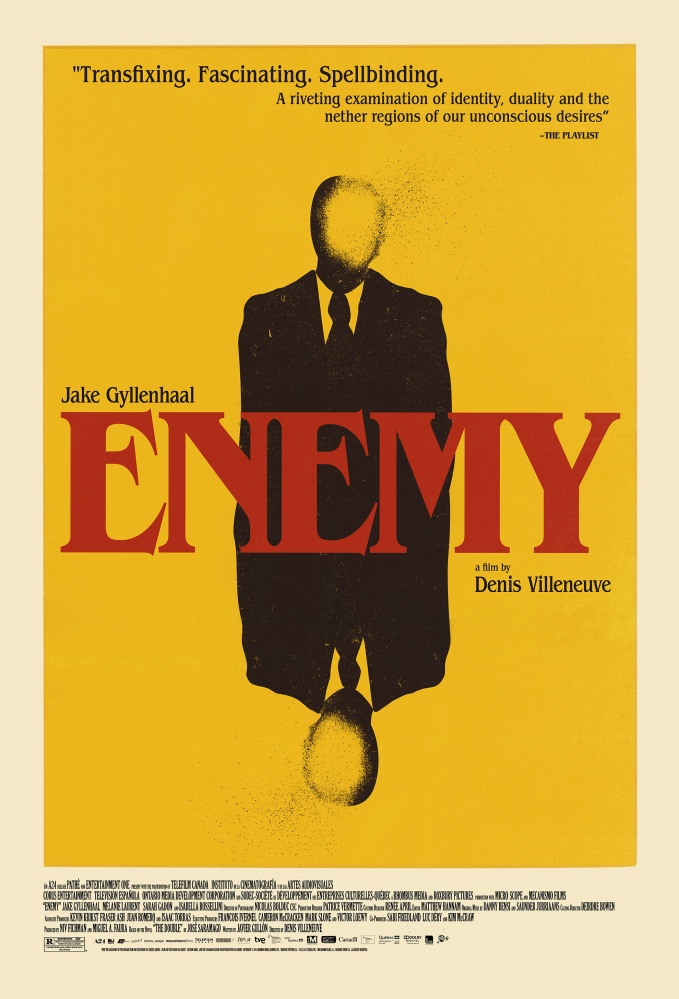 A mild-mannered college professor (Jake Gyllenhaal) discovers a look-alike actor and delves into the other man’s private affairs.

I’ve been catching up on the films from Denis Villeneuve that I hadn’t seen yet. Out of the movies I had already seen from him however, Enemy was the one film that I hadn’t reviewed yet. Since it was a movie that required a rewatch anyway, I decided to give it another viewing, and I can confirm that it’s even better the second time. Villeneuve’s mystery doppleganger thriller is very effective and really is worth seeing when you get the chance to.

Talking about why Enemy works so well is difficult, considering that it would involve getting into heavy spoilers. If you watched the movie and are confused by it, I recommend looking up theories online that explain it, and better yet, think a lot about what you just watched. I say this because it doesn’t spell things out for you as to what’s going on, even though it was made with a certain intent from Villeneuve. I’m not spoiling anything when I say this, but there is no real twist or reveal for the movie, so you’re going to need to look deep into the movie to understand what’s going on. I’ll do my best to keep things spoiler-free. First of all, if you’re afraid of the sight of spiders, you’re probably going to find this a little difficult to watch as they make their unpleasant appearances in the movie (the spiders do actually have a symbolic reason for being in the movie instead of just freaking people out). The tone throughout is kept very eerie and unnerving, and you are pulled into this doppelganger story, which really has you intrigued from start to finish. It really does feel reminiscent of a David Lynch movie. Also, the movie is much better on a second watch, having known what a lot of the scenes now mean you really get more out of it. At an hour and 30 minutes, Enemy is kept at a good pace and has your undivided attention, even if you don’t necessarily understand what many of the scenes mean. The ending is quite abrupt and might feel cheap for some people but having known the context of the themes and all that, it’s great. It does have a meaning beyond being a jumpscare (specifically the last couple shots of the movie).

Jake Gyllenhaal was the main star of the movie in dual roles and as usual was fantastic. He really did feel like two different people and was especially great when he was playing off himself. Gyllenhaal is also great at portraying the obsessions of his characters as they’re trying to figure everything out. The rest of the limited cast were good but the supporting players who stood out was Mélanie Laurent and Sarah Gadon, who were great here.

Denis Villeneuve’s direction was fantastic as to be expected. As all of his movies nowadays are, it’s an absolutely stunning looking movie. Enemy also has got this yellowish tint to it throughout, which really gives off this strange vibe, and it’s very effective. There are also moments of brief scary imagery, which really are effective and get under your skin. It’s made even more uneasy by the soundtrack from Daniel Bensi and Saunder Jurriaans, giving this really unnerving feeling.

Enemy is incredibly complex and layered, the performances from dual Jake Gyllenhaal and Mélanie Laurent were great and Denis Villenueve has once again fantastically crafted a deep and unnerving psychological thriller. It may be confusing at first, especially for first time viewers, however it becomes much more satisfying as you think about it more, and especially when you watch it again. Go into it knowing as little about the movie as possible. Though just prepare yourself if you have a phobia of spiders.