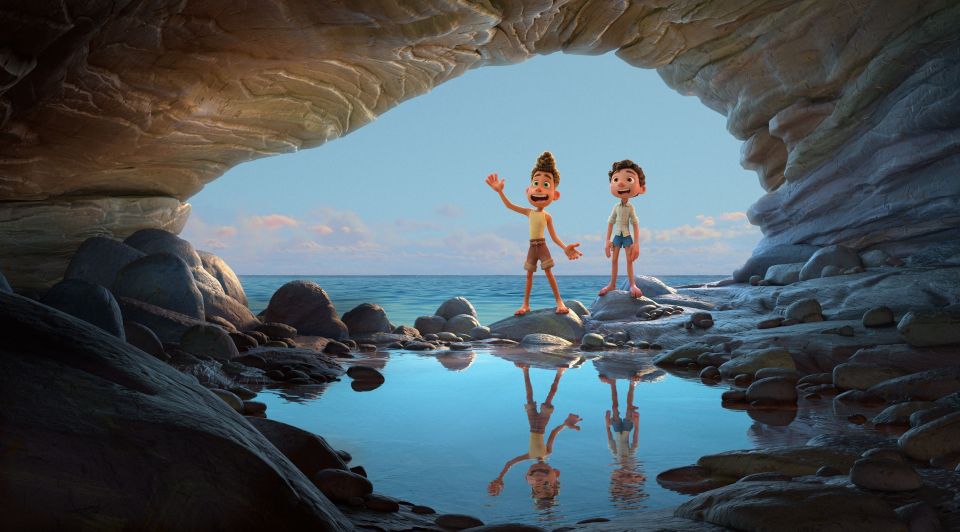 Set in a beautiful seaside town on the Italian Riviera, the original animated feature is a coming-of-age story about one young boy experiencing an unforgettable summer filled with gelato, pasta and endless scooter rides. Luca shares these adventures with his newfound best friend, but all the fun is threatened by a deeply-held secret: he is a sea monster from another world just below the water’s surface.

I only knew a little bit about Luca going into it, I just knew it was a Pixar Animated movie set in Italy. I only found out that it involved sea people when I watched the trailer like a day before watching the movie. So I really had no prior expectations going in and I’m glad I checked it out, I enjoyed it a lot.

To get this out of the way, Luca is not very ambitious by Pixar standards or animated movies standards, and is very much formulaic. It was light and fun with a lot of humour, but I was still invested in how the story played out. Essentially it’s an easy coming of age summer hangout movie, and the lower stakes story was honestly rather refreshing. It is a conventional story on the surface but it works well because of the execution. I’ve seen some reviews comparing Luca to a Studio Ghibli/Hayao Miyazaki movie and its pretty apt comparison. Luca is a coming of age with a high concept premise with sea monster people while still being anchored to a simple human scale. It’s a simplistic plot but has a lot of character work and has a big heart at its centre. It is a tale of acceptance, individuality and friendship, as well as a story about self discovery and hiding one’s identity to fit in. It definitely excels in its quieter moments too. I am fine with it not being particularly original or ambitious, but I do think it did feel a little too content with its tropes. The fish out of water story has been done plenty of times and it doesn’t really do anything different here (outside of being a literal fish out of water story this time). There were some plot and character aspects that could’ve been expanded on and developed to give some context, and some cliches that make it into the film could’ve been avoided. Some of the conflicts particularly could’ve been handled better. Luca’s parents are scared of him leaving the ocean and it just felt very familiar and by the numbers and could’ve been fleshed out. Even the eventual conflict between the two main characters comes out of nowhere and feels rather forced. The finale from a story standpoint is good, the action in the climax does feel very familiar to other animated films, but is still fun. It also still packs an emotional punch near the end because of the characters, particularly with the strong friendship established between the lead characters. Luca is 100 minutes long and that was the right length for it, which is helped with the good pacing which never gets too slow.

The characters were quite memorable and were good all round. The young lead characters with Luca, Alberto and Giulia, and the voice acting from Jacob Tremblay, Jack Dylan Grazer and Emma Berman respectively were great. The strong lead friendship between Luca and Alberto in the forefront was fantastic particularly, and drives much of the movie. The rest of the characters were pretty good too, there were only two that stood out as being out of place. The first was the villain, who is basically just a bully and it feels like the movie didn’t really need him and worked fine without him. With that said it’s something you can look past, and if you’ve been a little annoyed at twist villains and tragic villains in animated movies nowadays, then you’ll probably like his addition here. The other is the uncle of Luca, if only because he was voiced by Sacha Baron Cohen but ended up being a cameo since he only had one scene.

The direction from Enrico Casarosa is great. The animation style is a bit different from most Pixar movies but is still absolutely gorgeous, definitely one of their best-looking movies. It seems to capture this town in Italy perfectly, with its depiction being whimsical and vibrant in contrast to the dark and deep ocean that the film starts off in. The character design is great especially with the sea monsters. The score from Dan Romer was warm and fitting for the film.

Luca is not one of Pixar’s best but it’s a really good and enjoyable animated movie, it is gorgeous to look at, and has endearing characters and a formulaic but still heartfelt story. It might not be anything new or special, but it’s a refreshingly simple and fun summer hangout flick and definitely worth checking out. 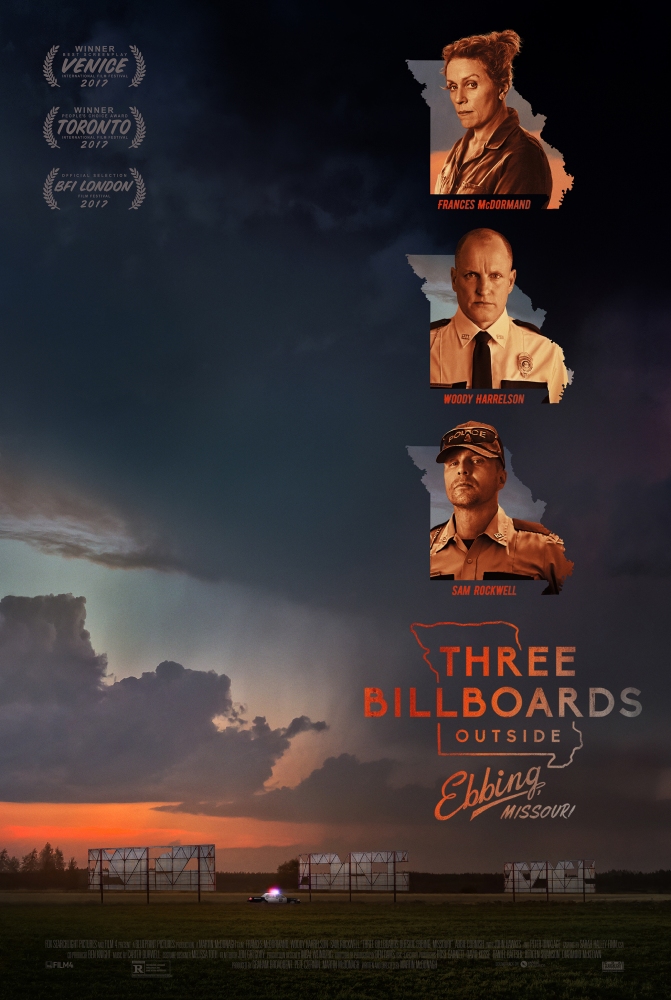 After months have passed without a culprit in her daughter’s murder case, Mildred Hayes (Frances McDormand) makes a bold move, painting three signs leading into her town with a controversial message directed at William Willoughby (Woody Harrelson), the town’s revered chief of police. When his second-in-command, Officer Dixon (Sam Rockwell) — an immature mother’s boy with a penchant for violence — gets involved, the battle is only exacerbated.

Three Billboards Outside Ebbing, Missouri was one of my most anticipated films of 2017. On top of having a great cast with Frances McDormand, Woody Harrelson and Sam Rockwell, it was Martin McDonagh’s next film, and so that had my undivided attention. His previous movies, In Bruges and Seven Psychopaths were amazing and some of my favourite movies. So understand that it means a lot when I say that Three Billboards is a career best from Martin McDonagh. 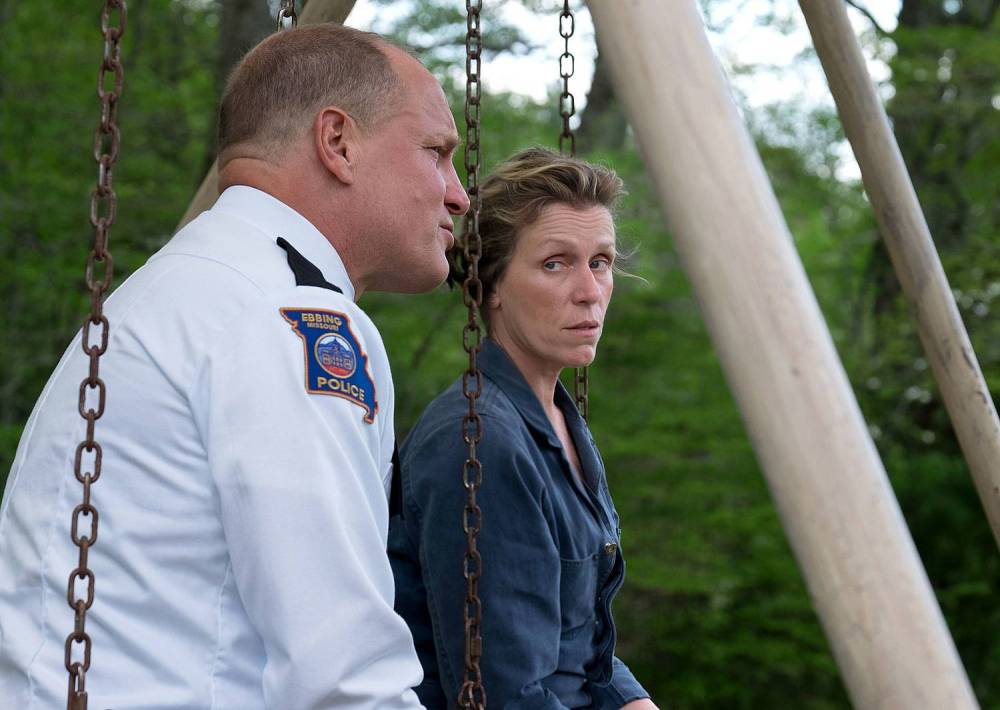 Martin McDonagh’s writing is absolutely fantastic, no surprise there. A lot of elements of his style of his writing in his previous films here too. The dialogue is once again pheromonal, ranging from comedic, to shocking and sometimes even heartfelt. Three Billboards is hilarious at times, with comedy often appearing in surprising moments but at the same time the film is quite dark, bleak, and very emotional. Not many people can switch tones on a dime and make it work effectively but McDonagh is one of the few people who can do it. One of the best parts about Three Billboards is that you can’t predict what’s going to happen, which is why I recommend not looking into this movie too much before watching it, I only watched the trailers going in and I was surprised by a lot of things that happened, and I’m not easily surprised. This is a very original screenplay and nothing is in black and white, there are really no heroes or villains here. The characters are well realised and given more depth than you might initially think they have. One thing I know that will definitely divide people is the ending, it was quite abrupt and not quite what I expected, if I was going to compare it to another movie ending, it would be to No Country for Old Men. However, I think that there was a real reason for this decision and something about it made me okay with it, but I will need to think about it more.

Frances McDormand is fantastic here, she’s had many great performances but this is her best performance since Fargo, and it’s possibly better which is saying a lot. She’s likable, tough as nails and really is a force of nature on screen, while maintaining some vulnerability, Mildred Hayes one of the best characters that Martin McDonagh has written. She really was the perfect actress for the role, I can’t seen anyone else playing her. Woody Harrelson’s performance as the chief of police who McDormand’s Mildred is calling out shouldn’t be overlooked either. His performance here is very nuanced and emotional, this is some of the most emotional work that Harrelson has done and he really is great. Sam Rockwell is quite an underrated and great actor, so its no surprise that he gives an excellent performance here, but this might also be one of the best performances he’s ever given. He plays a racist, dim-witted, violent and unstable cop. On top of having to be both hilarious and vile, he’s also got to have this unexpected arc (which I won’t go too deep into) and all I’ll have to say is that Rockwell was remarkable and pulls it off. Other actors like John Hawkes, Sandy Martin, Peter Dinklage, Lucas Hedges and Caleb Landry Jones all do great jobs and each have their moments to shine.

Martin McDonagh’s direction of Three Billboards overall is good. The direction isn’t really the highlight or focus of the movie but McDonagh does the best he can to make it the best it can be. The cinematography was good, complimenting the performances and writing while never overshadowing them. Carter Burwell’s score also fits perfectly with the movie, it’s there when it needs to be there to and at the right moments. The only out of place thing in terms of the direction was at one point there was an obviously looking CGI deer, that took me out of the movie a bit but that’s just in one scene.

Three Billboards Outside Ebbing, Missouri is absolutely fantastic. The performances were amazing, especially from Frances McDormand, Woody Harrelson and Sam Rockwell and it’s Martin McDonagh’s phenomonal writing and direction that makes it all fit together to make a remarkable movie. Hilarious, shocking, dark and emotional, Three Billboards is one of my all times favourite movies of 2017.