Hundreds of years after civilization was destroyed by a cataclysmic event, a mysterious young woman, Hester Shaw (Hera Hilmar), emerges as the only one who can stop London — now a giant, predator city on wheels — from devouring everything in its path. Feral, and fiercely driven by the memory of her mother, Hester joins forces with Tom Natsworthy (Robert Sheehan), an outcast from London, along with Anna Fang (Jihae), a dangerous outlaw with a bounty on her head.

Mortal Engines was a movie I was hearing about for a little while. I knew that it was based on books, had Hugo Weaving as part of the cast and Peter Jackson would be producing it. I was somewhat interested in the movie but outside of the visuals, didn’t know what to expect from the movie. Overall I had a good time with Mortal Engines, despite a script that could’ve been better, there are aspects that are quite solid and the visuals more than make up for its faults.

Mortal Engines is based off the first of the book series of the same name, I don’t know yet whether they’ll adapt the rest of the books. The script is a bit of a mixed bag, it’s generally okay but it’s got some problems. I didn’t have a problem with the worldbuilding necessarily, even when there are some bits that I didn’t quite get, I went along with it. I was generally on board with the world of the movie. With that said, there is a bunch of exposition dump, particularly in the first act, whether that be what happened, or the backstories of the characters. I wasn’t emotionally invested in the story but I was invested enough to pay attention to the whole story, despite my problems with the script I never was bored with what was going on. One unfortunate thing about the movie is that it doesn’t really have much personality to it, it feels somewhat on autopilot and you can mostly see where the plot is going. The ‘unpredictable’ parts to the story don’t really surprise that much because you’re not that invested with the characters. It makes attempts at having emotion and making you care about what is going on, but almost all of the attempts fall flat, whether that be tragic backstories revealed or characters being killed off, I just wasn’t feeling anything. There was literally only one character that came closest and he’s a supporting character.

One of the more disappointing parts to the movie is that the characters just are rather weak. Unfortunately it’s the main two leads that are the weakest. The actors who plays the main characters of Hester Shaw and Tom Natsworthy (Hera Hilmar and Robert Sheehan) aren’t bad at acting and aren’t necessarily badly cast, it’s more the writing of the characters that’s the problem. In the first act, they are a little annoying how simple and flatly written they are, Hester is just broody and Tom is fast talking and rather annoying. When it cuts to them my interest just wavered because I really wasn’t interested in it and watching them interact really didn’t do much for me. After the first act they do lose their blatant traits, become rather generic protagonists and actually became much more watchable. Throughout though I just didn’t care about these characters. It’s like they were given a few broad characteristics and some history and literally nothing else. Despite Hester’s big thing being about avenging her mother by going after Hugo Weaving’s character, you don’t really care about it that much, most of all there’s really nothing to her character outside of that. Also the supposed romance in the film between the two characters, I really didn’t buy it at all. They are like polar opposites to each other and conflict with each other, then one of them gives their backstory, then other does the same, and then they get to like each other over time because… reasons. I haven’t read the book but I assume that they were done much better in the books. I wouldn’t normally make a big deal out of this but it really does hurt the movie when it’s the lead characters that fail. The supporting characters actually do fare better, most of them aren’t great but some of them are pretty good, such as those played by Jihae, Leila George and others. Hugo Weaving plays the villain and the character isn’t really anything that special, but Weaving does add quite a lot and at the very least ham up the role so that he’s at least entertaining. The standout of the movie however is Stephen Lang as a motion captured character named Shrike, who is basically a terminator-like robot who is hunting Hester. He’s menacing and imposing and ironically, he’s the closest thing to an emotional investment that I had to any of the characters in this movie. He actually adds quite a bit of humanity to the movie that none of the characters were able to do. 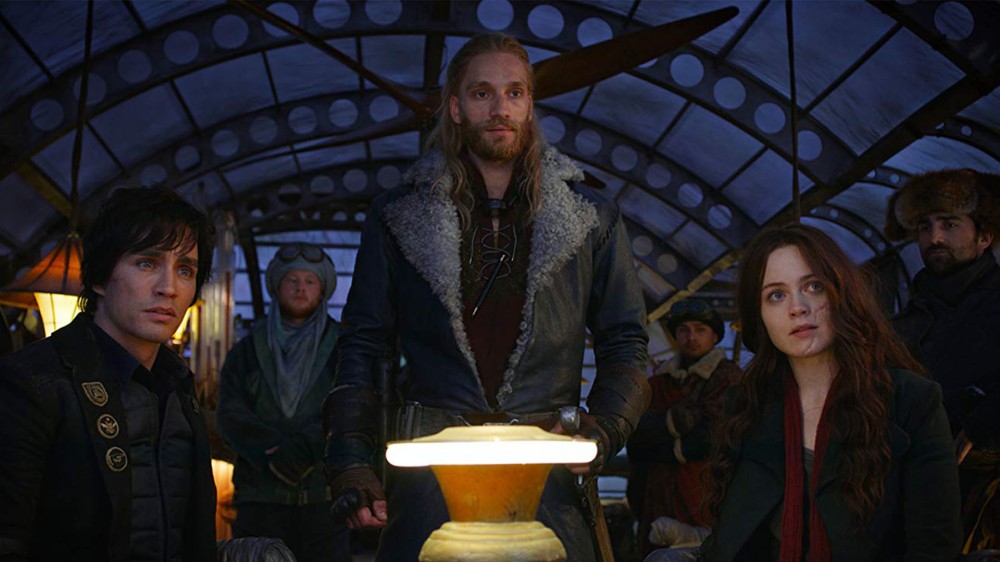 The film is directed by Christian Rivers, who worked with Peter Jackson on a lot of his movies and as you can probably tell the visuals are really great, and basically the reason to see the movie. There are times where you can clearly tell that some effects were green screen but it’s not too distracting and didn’t happen too much. The designs for everything, the sets, the characters and costumes were also really great. Everything is on such a large scale and you really feel it. The machines are so unique looking, and rough looking and designed well and great to watch. It doesn’t really slip into something that The Hobbit movies occasionally did (especially The Battle of the Five Armies) where so much of what was going on looked fake. The effects on Shrike were particularly impressive, they made him look like he was actually there, almost like they actually created a robot. The action is also mostly well filmed and rather entertaining, whether that be fight scenes or machine battles.

Mortal Engines was pretty much what I was guessing the movie was going to end up being, visually stunning and with an okay but flawed and generic script. With all that being said, it is worth seeing in the cinemas for the visuals at least. If they end up adapting the next Mortal Engines books, I hope the script and characters are done better.