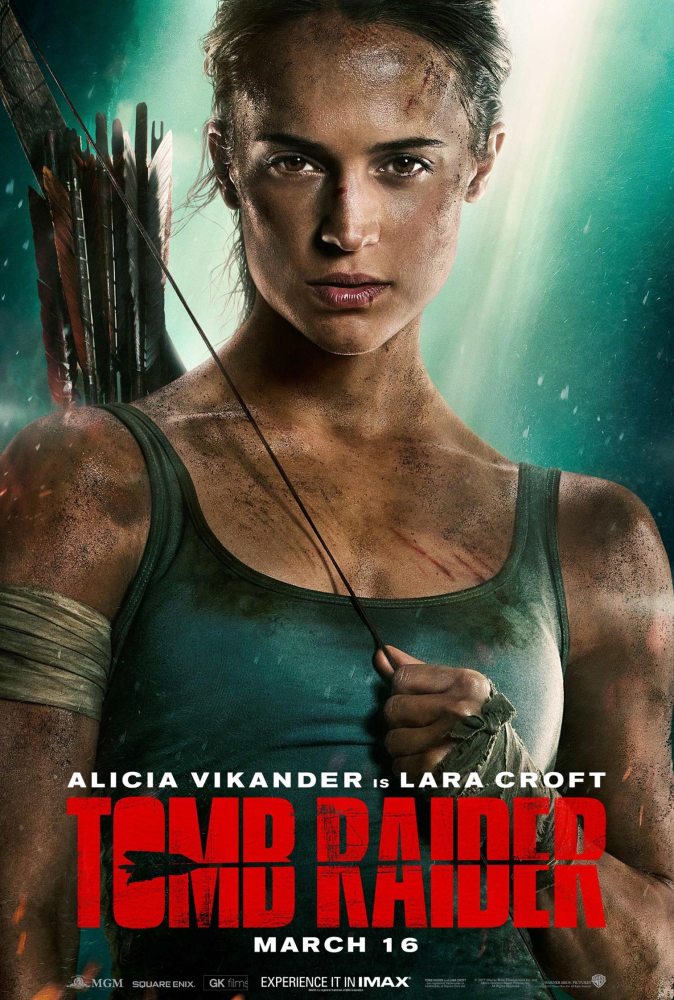 Lara Croft (Alicia Vikander) is the fiercely independent daughter of an eccentric adventurer (Dominic West) who vanished years earlier. Hoping to solve the mystery of her father’s disappearance, Croft embarks on a perilous journey to his last-known destination — a fabled tomb on a mythical island that might be somewhere off the coast of Japan. The stakes couldn’t be higher as Lara must rely on her sharp mind, blind faith and stubborn spirit to venture into the unknown.

I was cautiously optimistic about Tomb Raider. Very few video game movies I would even be able to call okay. Even though this new version of Tomb Raider was based on the great 2013 rebooted series and starred Oscar winning Alicia Vikander, I was still sceptical. Video games movies even today struggle, Assassins Creed had stars like Michael Fassbender and Marion Cottillard and had the director of Macbeth yet it ended up being okay at best. So really I wasn’t sure how Tomb Raider was going to be, turns out however that it was actually quite decent. The plot is quite familiar and the movie overall isn’t anything special, but as an action adventure it works quite well, and it’s far better than at least nearly all video game movies that have come before it.

I played the Tomb Raider games starting from the 2013 reboot, there are some similarities to the reboot, with this story being Lara starting out on her first adventure and the tone being more darker and realistic. At the same time it’s not just the original game adapted completely, so it’s free to do it’s own story and doesn’t feel confined, which is good. Tomb Raider knows what it is, that being a fun action adventure, yet it takes itself seriously enough for you to somewhat care about what’s going on, it’s balanced out well enough. The plot is straightforward enough, it’s not needlessly complicated. That’s probably why the Tomb Raider movies are among the better video game movies, there isn’t a lot of convoluted and complicated details to shove in and its easy to fit the character and world into movie-like stories. I will say that it did drag in parts in the second act but aside from that the pacing was fine enough. Tomb Raider has kind of a predictable plot, by a third of the way into the movie, you’ll probably be able to tell where the story will go and end. However that wasn’t too much of a problem for me, it is clearly just meant to be an enjoyable action movie, nothing more. Comparing a video game movie to something like to Indiana Jones is rather unfair and ludicrous honestly. Tomb Raider does quite well with what it set out to do. The end of the movie is setting up for a sequel, there are some elements in the movie which does feel a little world-buildy but it didn’t distract too much from the main story overall, except for the very last scene which is a little too blatant. By the end though, I was satisfied enough with the movie that I’m ready to see a sequel.

Just like how the 2013 reboot differed from the older games, Lara Croft here, played by Alicia Vikander, is noticeably different from the Angelina Jolie versions of the character. She’s starting out on her first adventure, she’s vulnerable and not invincible, yet very capable, she’s very similar to the rebooted Lara Croft. Alicia Vikander’s Lara Croft is probably the biggest takeaway from the movie. Vikander did a great job as Croft and was quite an effective screen presence, you can really buy her in her role. The fact that Vikander is doing most of her own stunts also helped. She really does get to shine in this movie, and I’m glad they utilised her well unlike some other video game movies that have great actors who are ultimately wasted. The supporting cast also do well, even though their characters aren’t handled as well as Lara. Supporting actors like Daniel Wu and Dominic West play their parts well. Walton Goggins also acted pretty well as the villain though he is let down by his character, who isn’t given too much to work with.

There is some editing and cutting problems during some of the action and fight sequences, which does bring down the movie a little bit because of how jarring it can make these sequences feel but I’ve seen way worse cases of it in other movies, and it didn’t bother me too much. Aside from that the direction of the film by Roar Uthaug is actually quite good, like the reboot of the game series it is more realistic than the previous versions of the games/movies, while being big enough that it’s quite entertaining. The CGI was a little hit or miss, at times it looks pretty impressive, at other times it can look pretty fake. The score from Junkie XL was also pretty good.

Tomb Raider is one of the best video game movies, it’s up there with Warcraft. It actually manages to be a little more than just a passable or guilty pleasure movie, and for a video game movie, that’s saying a lot. While it’s not great and it does have it’s fair share of issues, it is decent and entertaining, and I really do recommend going out to see it. I do hope it gets a sequel, it definitely has a lot of potential and with the way it set things up for a possible follow up, I could see an Alicia Vikander led Tomb Raider film franchise working. As for this first instalment in the possible franchise, fans of the rebooted series will probably like it, and I can see general audiences enjoying it for what it is. Either way, I’d say go out and give it a chance.