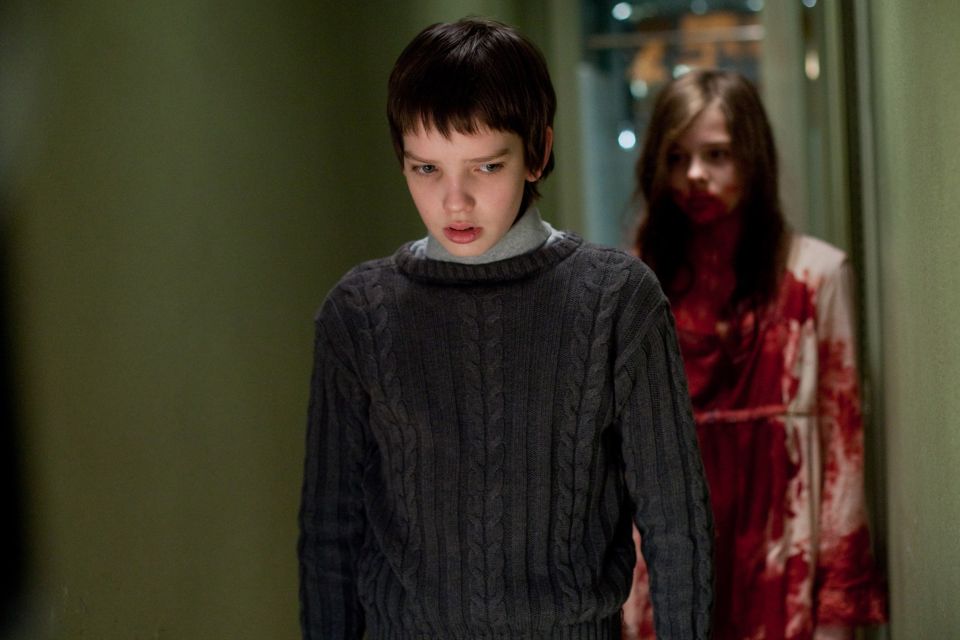 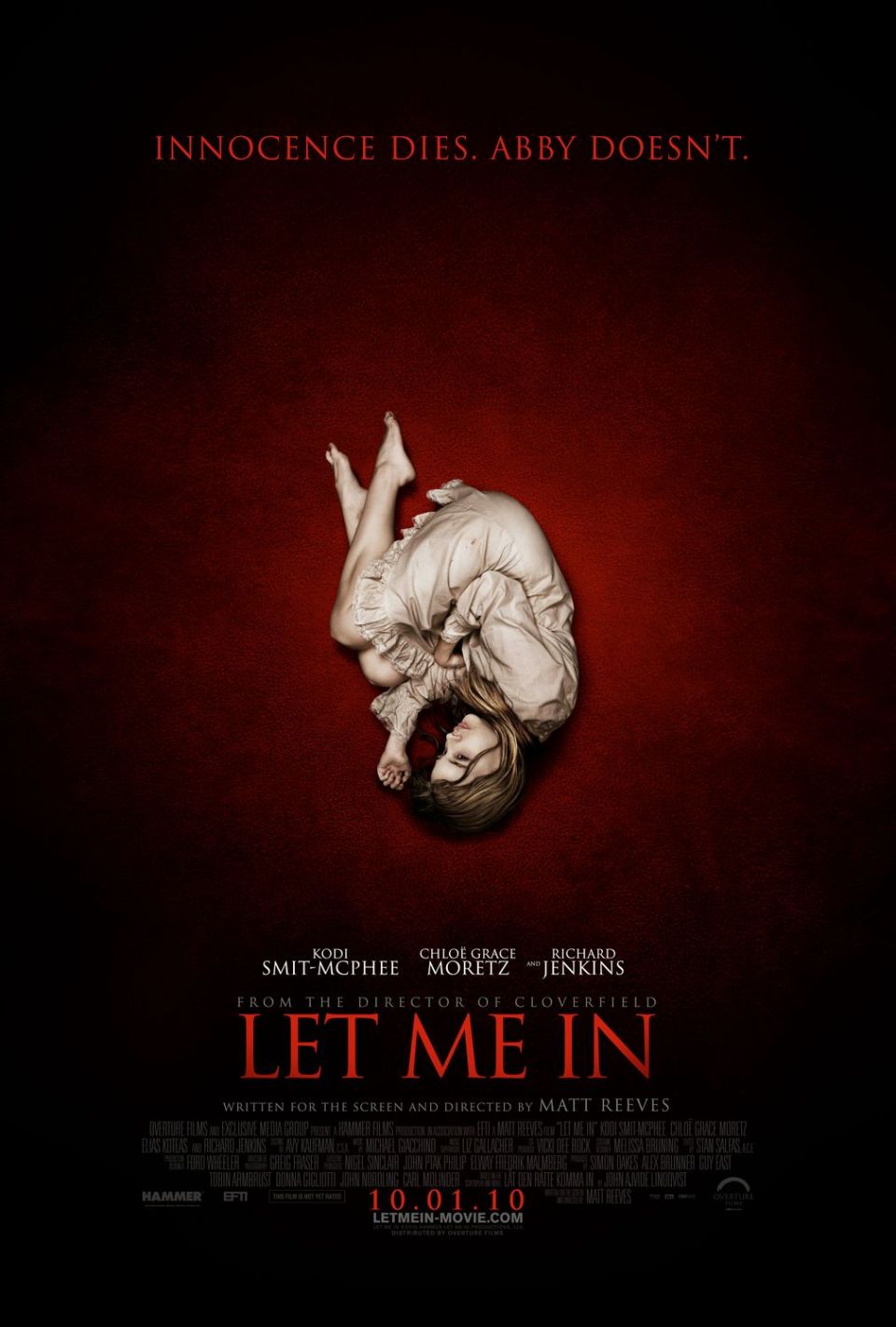 Owen (Kodi Smit-McPhee) leads a lonely life and is bullied by his peers at school. He happily befriends Abby (Chloe Grace-Moretz), his new helpful neighbour, without being aware that she is hiding a secret from him.

Let Me In was a movie I was interested in watching for quite a while. I deliberately held off watching it till after I watched the original, Let the Right One In, which turned out to be quite a great movie. The remake sounds like a bad idea at first, even with it being led by Kodi Smit-McPhee and Chloe Grace-Moretz and being directed by Matt Reeves. Not all American remakes are bad, but most of the time they don’t turn out the best, especially when it comes to remakes of foreign horror movies. Surprisingly, Let Me In is a pretty decent remake, and I liked it quite a bit, however it definitely could’ve afforded to take more risks. 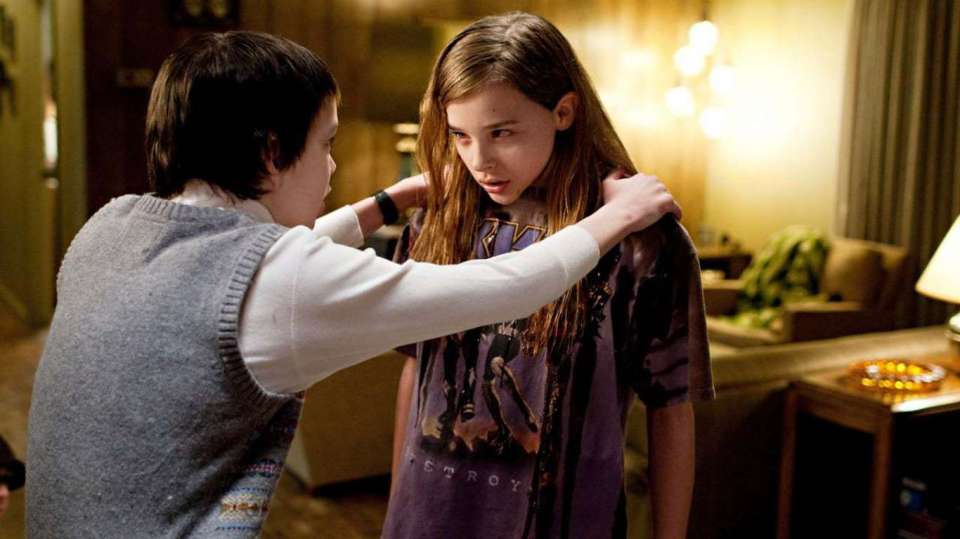 Usually American remakes of foreign movies simplify the plot, and water things down. The good news is that for the most part, Let Me In doesn’t do that. It’s pretty much the same plot just done again. That’s also the bad news however, it really doesn’t do a whole lot new outside of adjusting it to an American setting. The small changes that were added to the plot really didn’t serve the story much, including an opening which flashforwards to the middle of the film. There’s also a forced police investigation throughout the movie, and it just didn’t find it to add that much to the movie all that well. The main problem from the original with the bullies being over the top evil is also a problem here too. With all that being said, the rest of the movie is good, removing the original from it all. The pacing is good across its roughly 2 hour runtime, the story is engaging, and I enjoyed watching it quite a bit. 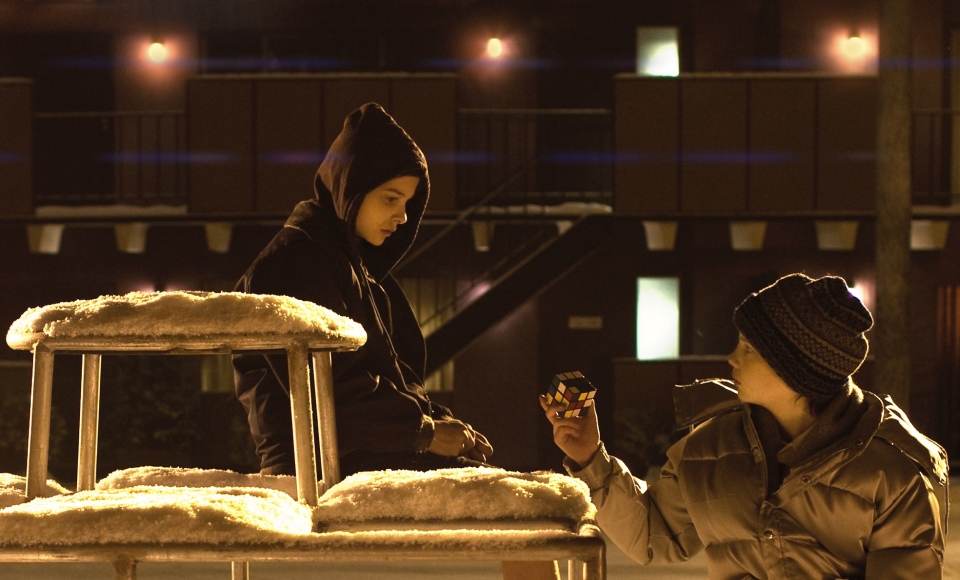 The acting is great, and one of the highlights of the film. Kodi Smit-McPhee and Chloe Grace-Moretz are in the main roles, and I’d go so far as to say that it’s on the level of the two leads from Let the Right One In at the very least. Their relationship and connection just felt genuine and real, and they shared great chemistry. Moretz is particularly fantastic in the role of the vampire girl, conveying so much emotion, it ranks among her best performances. The supporting performances are also good, mainly from Richard Jenkins and Elias Koteas. 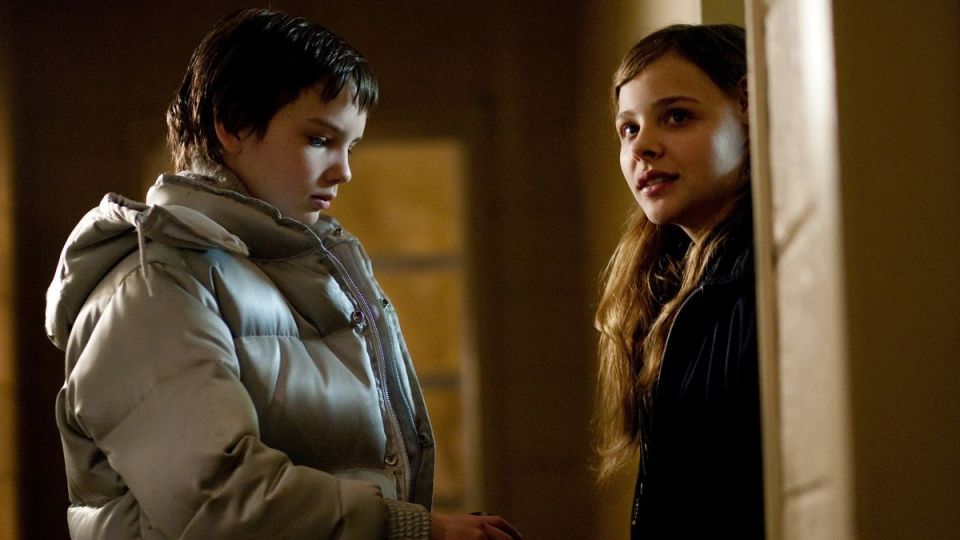 Matt Reeves’s direction is really great as to be expected, he was definitely the right person to handle this remake. It’s an absolutely gorgeous looking film, and I might actually slightly prefer the cinematography in this just a bit more over the original. Reeves gave Let Me In very atmospheric, on a technical level for the most part, it’s great. There are some faults especially when it comes to the use of CGI. Minor spoilers here, but without going into too much depth, there’s an attack in both versions that happens under a bridge by Eli/Abby (Chloe Grace Moretz), and it was done effectively in the original and wasn’t too silly. However, in Let Me In they added some CGI to her during scenes like this, and it just made it really goofy and over the top. There were some sequences that were done in a more over the top way in general, some of it is fine, but other times it doesn’t work so well. Let Me In is noticeably more bloody and violent than the original, but it’s not necessarily a bad thing. 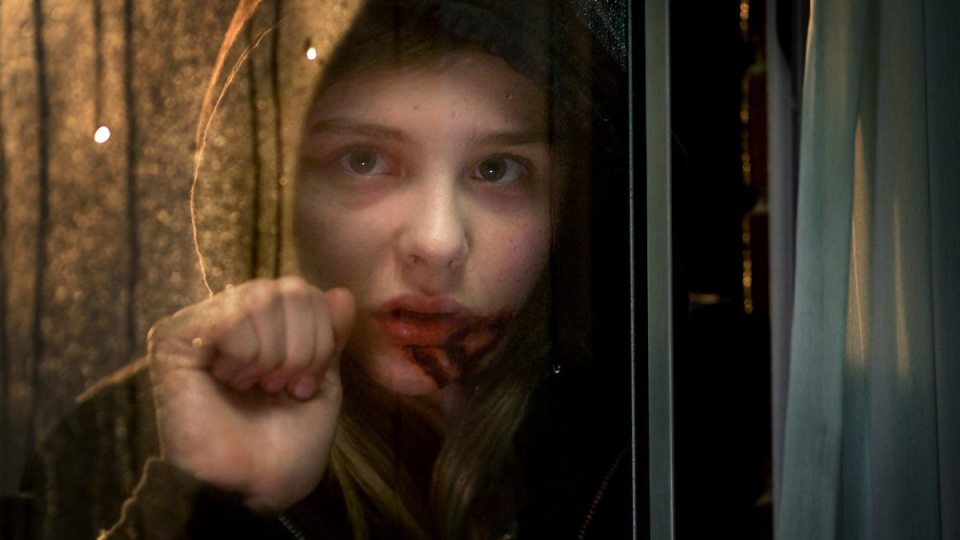 Let Me In could’ve been a lot worse, but there was definitely room for improvement. At the very least it could’ve benefited from trying something different. With that said it is still a pretty good movie, directed greatly by Matt Reeves, and acted wonderfully by Kodi Smit-McPhee and Chloe Grace-Moretz. It is worth watching for sure, just make sure not to watch it right after watching the original or anything. 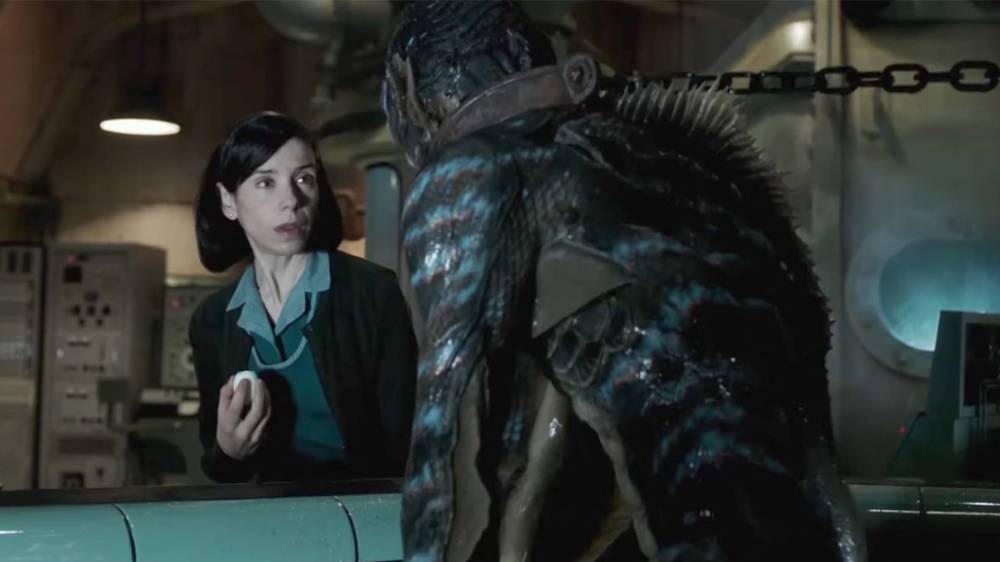 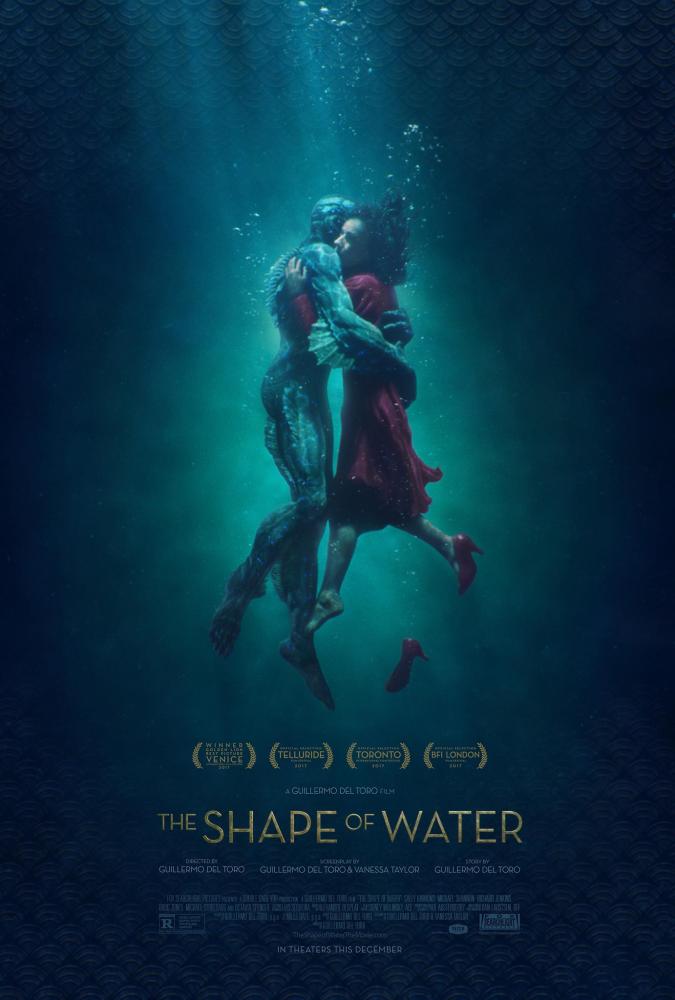 Elisa (Sally Hawkins) is a mute, isolated woman who works as a cleaning lady in a hidden, high-security government laboratory in 1962 Baltimore. Her life changes forever when she discovers the lab’s classified secret — a mysterious, scaled creature (Doug Jones) from South America that lives in a water tank. As Elisa develops a unique bond with her new friend, she soon learns that its fate and very survival lies in the hands of a hostile government agent (Michael Shannon) and a marine biologist (Michael Stuhlbarg).

I’ve been hearing a lot about The Shape of Water for a while in the lead up to awards season. I really like Guillermo del Toro, I’ve seen most of his movies and really liked them, even those which aren’t that wholly well received like Crimson Peak. The Shape of Water looked like it would be one of his best yet and having finally seen it, I have to say that this actually just might be Guillermo del Toro’s best film yet, which is saying a lot considering many of the films he’s made. The Shape of Water is absolutely magnificent and already a guaranteed classic. 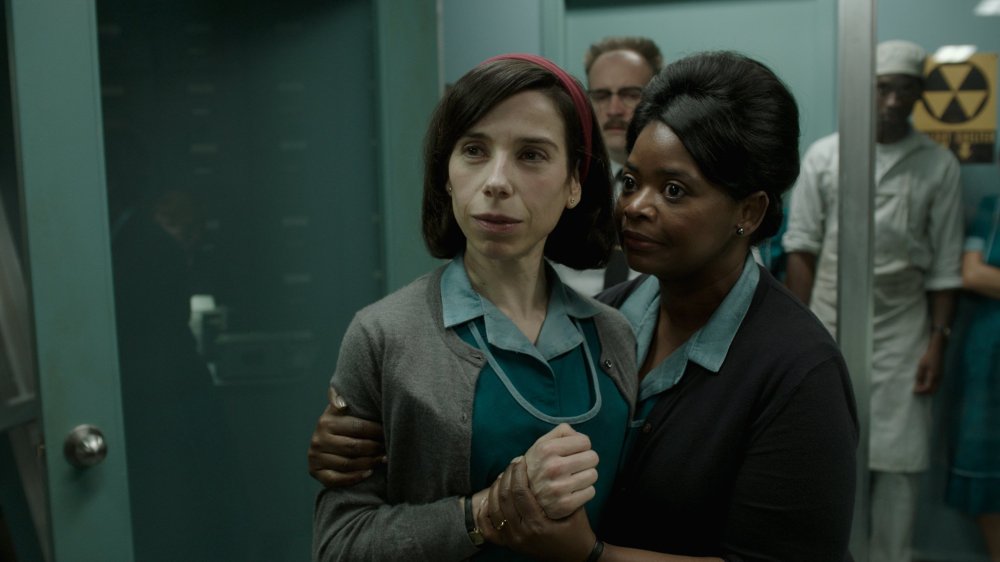 I loved the story of The Shape of Water, it’s beautiful, it’s dark, it’s absorbing, it dabbles in multiple genres and it all works perfectly. All the major characters are given a lot of depth and their own arcs. Fortunately, the marketing department seemed to learn their lesson from Crimson Peak and knew this time to not market The Shape of Water as a full on horror movie, because it’s definitely not that. Sure, it’s dark at many points, it doesn’t hold back, it’s R rating is well earned and serves the story appropriately. But this isn’t a horror movie. It also feels very grounded in real life, the only difference is that this creature actually exists in the world. The Shape of Water has a very fairy tale-like vibe to it and it actually works well in the film. Del Toro also does well showing why Elisa would fall in love with this creature. As weird as the concept sounds on paper, you completely buy it because del Toro conveys it so well. In fact there are a lot of ‘weird’ elements to the movie and at least for me, I never questioned any of it, as I said, Guillermo del Toro makes it all work. The Shape of Water is around 2 hours long and it is the perfect length. I was consistently absorbed in the story from start to finish and really don’t have any qualms with any of it. I’m not going to go into much more depth in regards to the story, it’s something you really need to experience for yourself. 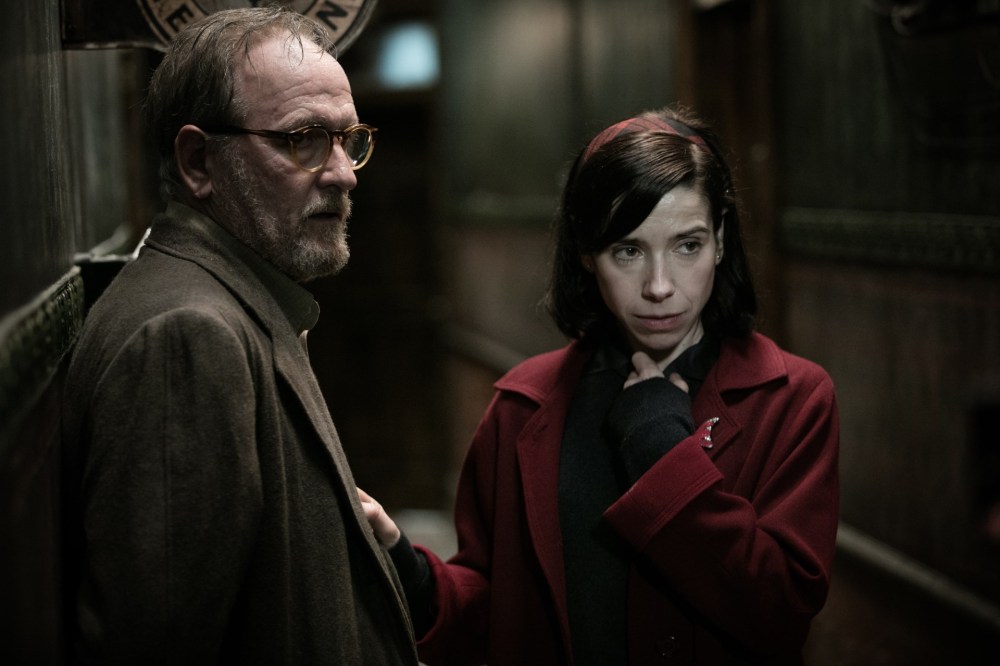 Everyone is great in this movie. Sally Hawkins is incredible here, she doesn’t speak and has to express her emotions through her facial and body language and she is absolutely wonderful here. While I haven’t seen much from Hawkins, it might be one of her best performances, it’s at the very least one of the best performances of the year. Doug Jones also deserves praise for playing the Amphibian create that Sally’s Elisa falls in love with. He doesn’t say a single word either and can convey so much, unsurprisingly considering how great he is in these kind of roles, he’s pretty much the Andy Serkis of practical effects. He really does give the creature life. Both Hawkins and Jones have so much great chemistry without speaking at all. Michael Shannon as usual is a scene stealer as the antagonist of the film, he does so well at coming across more like a monster than the actual amphibian creature. The other supporting actors are also great and do well to leave an impression, like Richard Jenkins, Octavia Spencer and Michael Stuhlbarg. 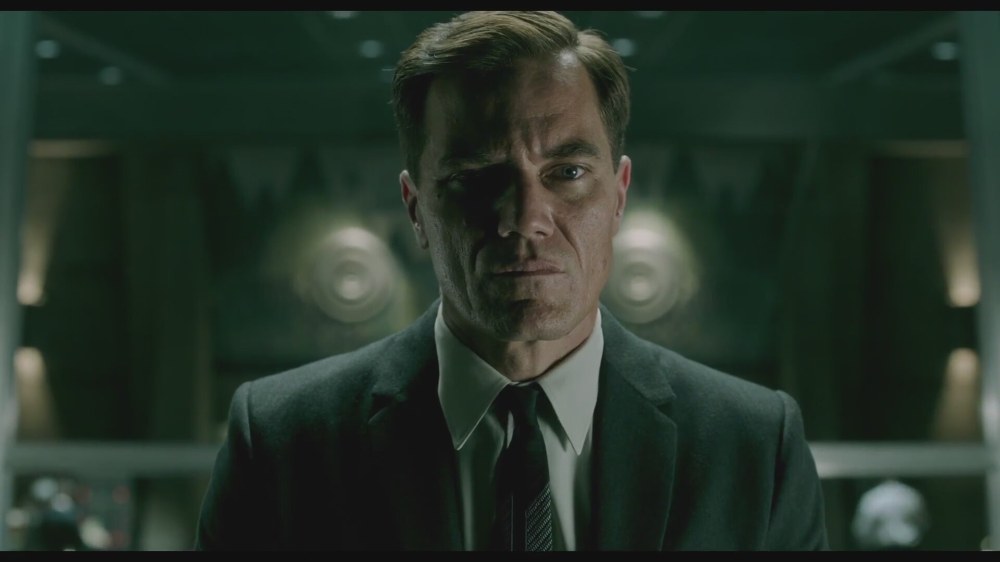 Guillermo del Toro did such a fantastic job at directing this movie, you can definitely tell that it’s his direction. The cinematography by Dan Laustsen was great, the colours particularly were used perfectly, creating some beautiful sequences. There was a sequence in the last act of the movie which was very surprising and comes right out of left field, and yet del Toro somehow made it work. When you watch the movie, you’ll know exactly what moment I’m referring to. Del Toro also does well to fully convey it’s time and setting with the production design, music etc, making it feel authentic to real life. The actual amphibian creature (which is practical) was designed very well and is very believable. The music by Alexandre Desplat was also very effective, very enchanting. Overall I think The Shape of Water is a perfectly directed movie. 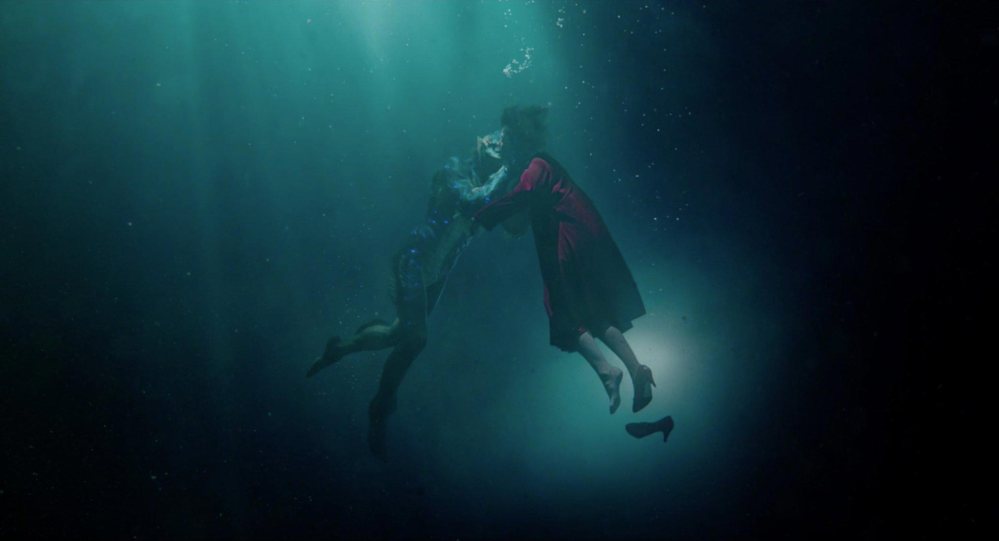 Guillermo del Toro’s The Shape of Water is incredible, it was even better than I thought it would be, and I thought it was going to be great. The story was great, the performances were all amazing and del Toro’s direction was perfect. The Shape of Water is one of my favourite movies of 2017, Guillermo del Toro really has crafted a beautiful film that deserves to be seen by many. I can already tell that this is going to be a future classic.