The protagonist of “Pain and Glory” (Antonio Banderas) was at the decline of his career. The man involuntarily looks back into the past, and a stream of vivid memories falls upon him. He recalls such moments from his youth as tender feelings for his mother, love and separation, the search for happiness and success. All this leads the master of cinema to important thoughts about life and art, because this is the most important thing for him.

I heard about Pain and Glory a little bit beforehand, mainly that Antonio Banderas won Best Actor at the Cannes Film Festival for his performance in it. Otherwise I didn’t really know much about the movie, aside from hearing some people say that it was good. Indeed Banderas is great and lived up to all the praise, but the movie itself was also pretty good on it’s own, definitely worth a watch.

Pain and Glory is a very contemplative movie as it’s about Antonio Banderas’s character looking back at his life. Now I don’t know much about the writer/director, but the story does feel very personal to him (especially given that the protagonist is a director and all that), and it certainly comes across throughout the entire runtime. Thankfully there is some self awareness at the same time, and indeed the movie has its light hearted moments. Pain and Glory is very slow and meditative. The first half took a while for the movie to really hook me. Not say that it was boring or anything, it was decent but I wasn’t invested quite yet. Also while the flashbacks to when main character Salvador was younger were necessary and played a part later in the story, it took me out of the movie more than anything. With that said, when it came to the flashbacks in the second half, I thought they really worked and added a lot. In fact it was the second half that made the movie work for me, from that halfway point that’s where it really picked up. Admittedly, I can’t tell whether it’s truly because the second half is better or if the movie has grown on me just thinking about it, maybe a little bit of both. Without revealing anything, the ending for Pain and Glory is absolutely perfect, and I couldn’t think of a better way of concluding the story. 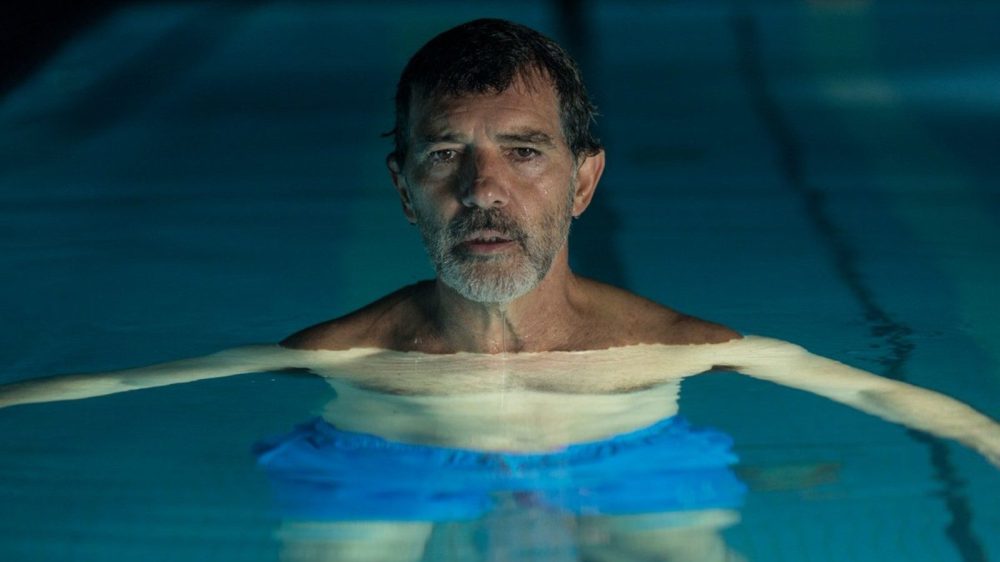 I have seen Antonio Banderas in a fair number of things and he’s generally been quite good, but admittedly haven’t seen him in a lot. However a lot of people are touting this as a career best from him, and looking at his performance here, I can definitely believe that. This movie entirely surrounds his character looking back at his life and Banderas plays his part beautifully. The supporting cast were also good and add quite a lot in their comparatively smaller screentime. The standouts were the significant people in Salvador’s life, like Penelope Cruz and Julieta Serrano as the younger and older versions of Banderas’s mother, as well as Leonardo Sbaraglia in his 2 scenes.

This is the first film I’ve seen from director Pedro Almodóvar, and from his work on Pain and Glory, I’d definitely like to see more of his movies. Its wonderfully shot, the cinematography is very vibrant and warm, and fitted very well with the movie. Overall it’s a very well directed and put together movie.

Pain and Glory is an emotional, personal and intimate movie, very well written and directed by Almodovar and with an excellent lead performance from Antonio Banderas. By the second half of the movie I was fully invested in this story. It really is a movie that grows on you the more you think about it. I think it’s worth seeing for Banderas’s great performance at the very least. 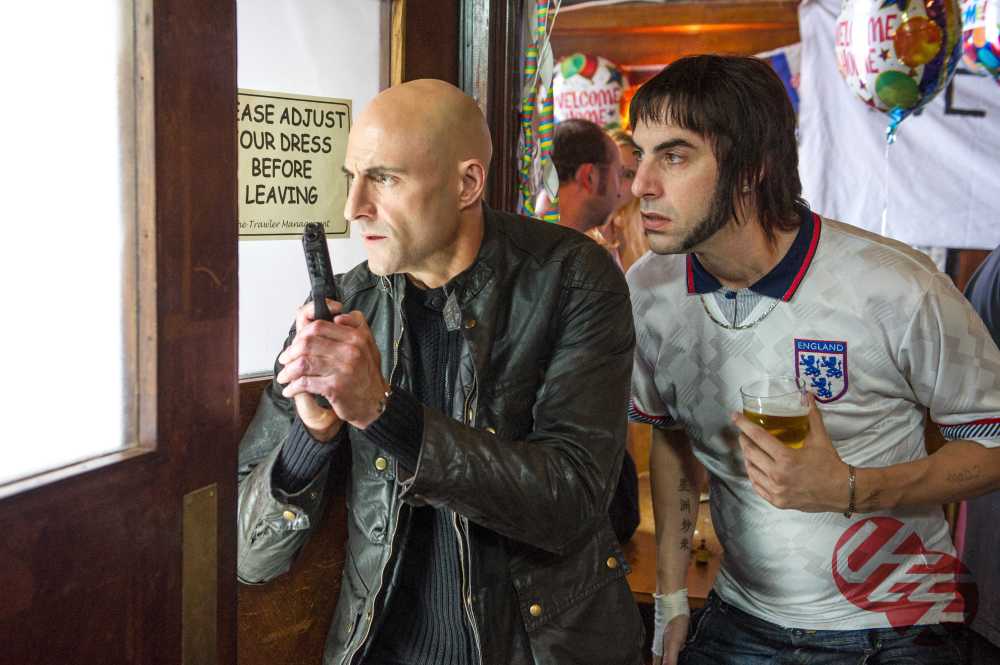 Dimwitted Nobby (Sacha Baron Cohen) lives in an English fishing town with his loving girlfriend (Rebel Wilson) and nine children. For the last 28 years, he’s been searching for his long-lost brother Sebastian (Mark Strong). When the two finally reunite, Nobby finds out that his sibling is a top MI6 agent who’s just uncovered a sinister plot. Wrongfully accused and on the run, Sebastian now realizes that he needs Nobby’s help to save the world and prove his innocence.

I was cautiously optimistic about Grimsby. It had the talent of Sacha Baron Cohen and Mark Strong and the director has made some decent movies. However Sacha Baron Cohen can be very inconsistent with his comedy. Still, I was willing to give it a chance. This movie unfortunately didn’t really do it for me. There were occasionally a couple of okay and mildly amusing moments, and the action and Mark Strong were actually good. But for the most part it was just annoying and unfunny. 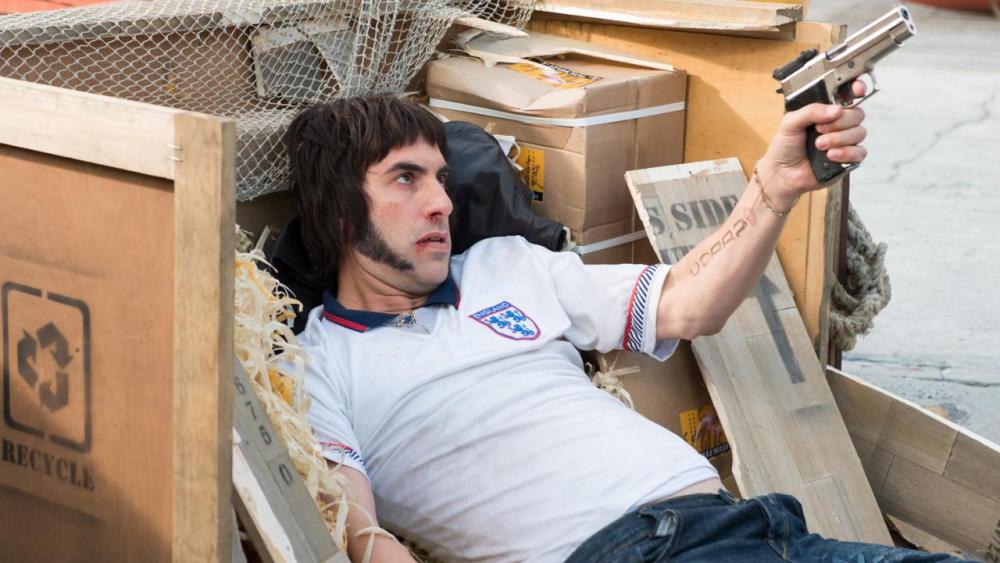 I knew going into this movie that it would just be a dumb silly comedy with out there gross and offensive jokes, however even knowing all that, I didn’t like this movie. The movie really wasn’t that funny but what’s worse is that this film tries way too far at times to be funny. I found myself fast forwarding a lot of the scenes, mostly through the scenes where they kept going with a joke which was never funny in the first place. The ‘highlight scene’ of the movie involves elephants, and it constantly felt like they were trying too hard. Was it disgusting? Yes. Was it funny? No. Some of you probably heard that this movie had a Donald Trump AIDS joke and yes its there. But like most of the other jokes, its forced and they made a badly CG (like utter crap CG) Donald Trump, so its not even worth going to the movie to see that. Now there were some jokes that did work but for every 1 funny joke, there were at least 10 unfunny jokes. I couldn’t care about any of the characters as well or what was going on (though I feel like that wasn’t what they were going for). I will say this, the movie wasn’t boring. Instead it was annoying and occasionally obnoxious. 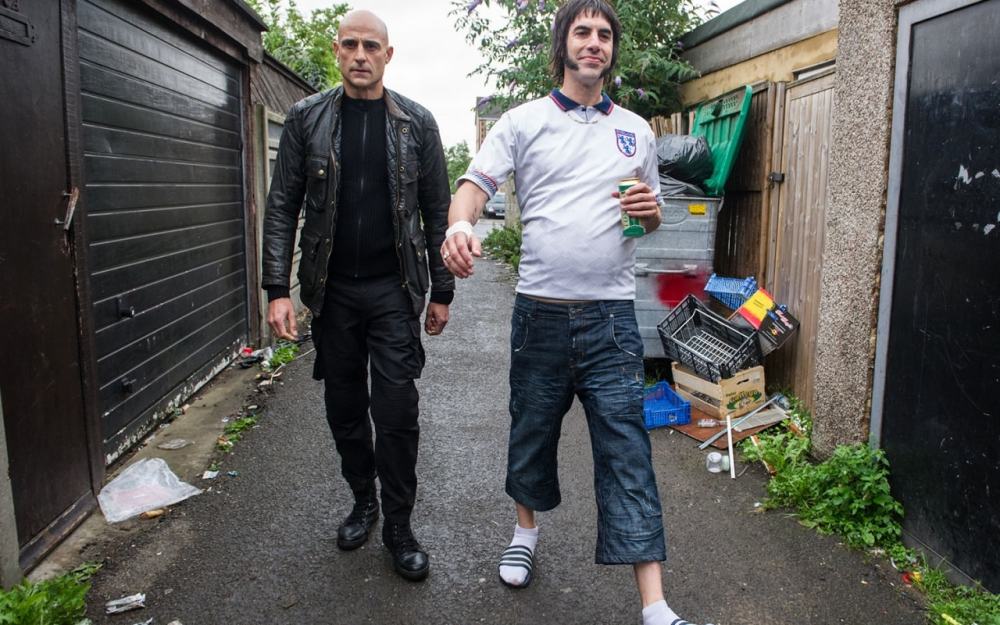 Sacha Baron Cohen is talented but here he was annoying. It didn’t help that his character was so clueless, like borderline Chris Hemsworth in Ghostbusters 2016. That kind of role needed to be handled right to make it work well and it’s not handled well here. Mark Strong is by far the best part of the movie, though I wonder if that’s because I liked him in other movies. Everyone else really doesn’t anything much, Isla Fisher, Rebel Wilson, Penelope Cruz, Ian McShane and Barkhad Abdi have done much better in the past, it makes me wonder why they are here. I mean I know Rebel Wilson stars in dud comedy films but what is Ian McShane doing here?

The director of this film is Louis Leterrier, who has done some action movies with Now You See Me, The Incredible Hulk, The Transporter and Clash of the Titans. Because of this, the action scenes are actually pretty good and are entertaining. There are a couple of segments where its done in first person and its done well. However I will say that this movie does have a lot of lazy CG at times.

The one thing I will say about Grimsby is that it will definitely get a reaction out of people, positive or negative. This film has a couple mildly amusing jokes, enjoyable action scenes and Mark Strong. Aside from that however, this film was just annoying to sit through. If you really want to see this movie, at least go in knowing what you’re in for. I didn’t like it even though I knew what sort of movie it was. But hopefully plenty of other people can enjoy it.

A rich and successful lawyer, the Counsellor (Michael Fassbender), is about to get married to his fiancée Laura (Penelope Cruz) but soon becomes entangled in a complex drug plot with a middle-man known as Westray (Brad Pitt). The plan ends up taking a twist and he must protect himself and his soon to be bride as the truth of the drug business is uncovered and targets are eliminated.

There are often films that have a great cast that turn out to be huge success, the film has the directing talent of Ridley Scott, the acting talent of actors like Michael Fassbender, Brad Pitt and Javier Bardem and its screenplay is written by famous author Cormac McCarthy. Unfortunately this film is a disappointment; however isn’t in my opinion a total failure (like some people think it is) with some decent performances, great look and music as well as the second half actually being quite good. However this is one of the most disappointing movies I’ve seen. 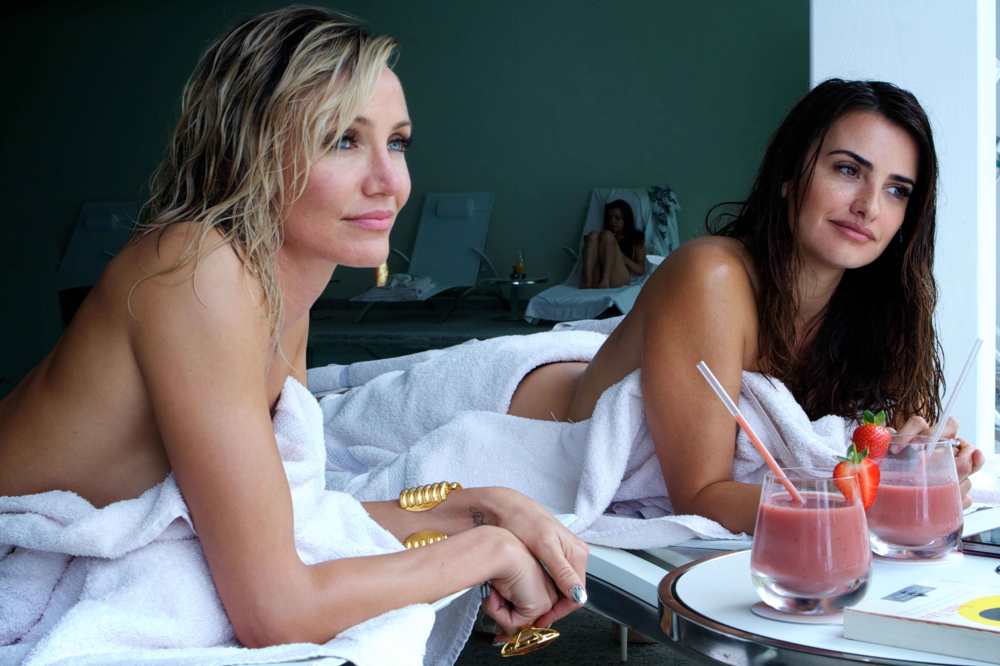 The script of this movie was written by Cormac McCarthy, who wrote books which got turned into some movies such as No Country for Old Men and The Road. After watching this movie I figured that he should stick to writing books because this screenplay isn’t that good, from what I’ve seen, this story would be better as a book and then possibly later adapted to a movie. The characters’ backstories aren’t exactly given so you can’t really understand much of why they do that they are doing, The first half of the movie isn’t very interesting and a lot of the dialogue is filled with metaphors; there may have been some sort of theme that this film is supposed to follow but it just wasn’t that well executed here, it just feels like padding. Nothing much seems to happen and it’s quite hard to follow the story as the film doesn’t seem to explain things, like how the Counsellor got involved in drug trafficking. The worst scene in the whole movie is when Cameron Diaz has sex with a Ferrari; even in any form of context, one has to ask why that scene was ever written. The second half of the movie is much better and seems to throw away the metaphors in the dialogue and more things actually start to happen; I’d even say that the second half is 8/10. The only problem I have with the second half is that the ending is a bit abrupt.

The actors do well with what they’ve got; as I previously mentioned some problems with the movie are that the characters’ backstories aren’t really given and the dialogue consists of a lot of metaphors. Michael Fassbender plays the main character and although his character doesn’t have much backstory given (not even his name is given) he gives a great performance. Brad Pitt is also a standout in this movie, personally I found his character more interesting but he was also pretty good as well. Penelope Cruz, Javier Bardem and Cameron Diaz also do pretty good with what they’ve got.

I quite liked the look of the movie, the locations are quite beautiful. The cinematography is pretty good with the exception of a car chase scene where there was a little shaky cam used. The music was also pretty good and seemed to be used quite well. The violence in this movie isn’t frequent but is bloody, it’s quite like No Country for Old Men and I personally thought it was well handled. 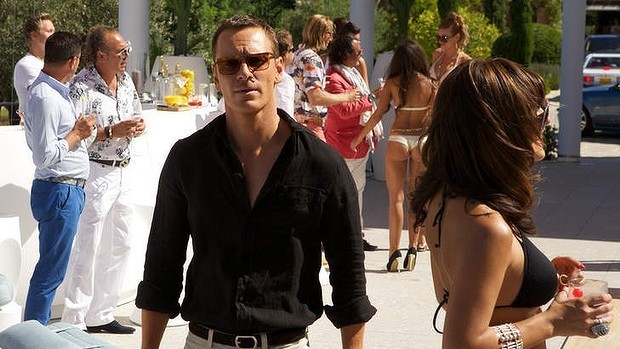 The Counsellor unfortunately is not a movie I’d recommend for everyone to see. The acting is great, the cinematography and music is pretty good, the thing holding the movie back is its writing. Ridley Scott has another movie coming out this year, Exodus but I don’t know how it will end up, hopefully much better than this movie.