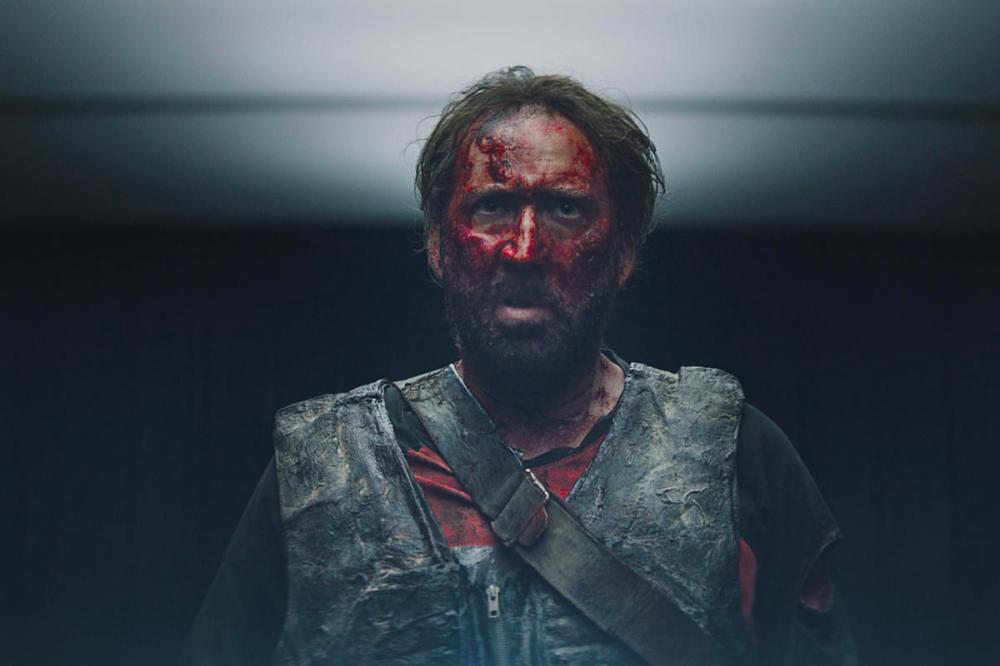 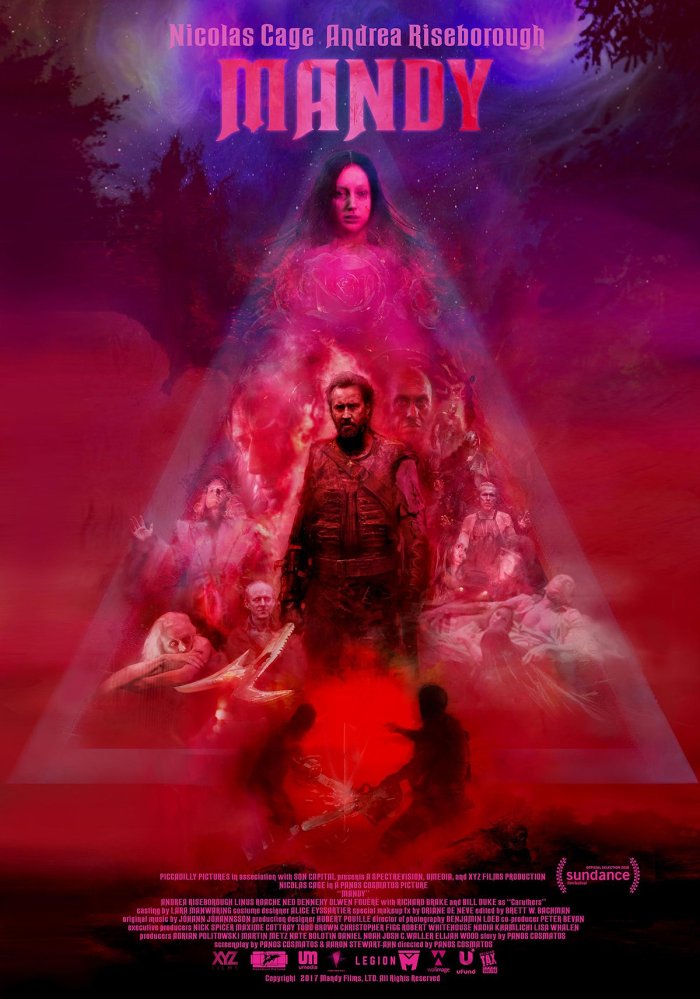 Pacific Northwest. 1983 AD. Outsiders Red Miller (Nicolas Cage) and Mandy Bloom (Andrea Riseborough) lead a loving and peaceful existence. When their pine-scented haven is savagely destroyed by a cult led by the sadistic Jeremiah Sand (Linus Roache), Red is catapulted into a phantasmagoric journey filled with bloody vengeance and laced with fire.

I had been looking forward to Mandy for a while, mainly because of Nicolas Cage. I do like Cage and I do think he’s a great actor but the movie itself looked good as well, from the trailer the whole look and style looked right up my alley. Even though it was being officially released online, I decided to wait in case it came to cinemas (as it was also being released in some select cinemas) as I heard it really benefits from watching it on a big screen. I didn’t even know if the theatre would come to a cinema in my city. I’m glad I waited though because watching in the cinema was one of the best experiences I’ve watched a movie in the theatre. Visually stunning and led by a perfectly crazed performance by Nicolas Cage, Mandy was one of the highlights of 2018.

Mandy is a straightforward movie with a straightforward plot, pretty much just your normal revenge story. What makes it stand out is how it is done. One of the things you really should know about Mandy before going in is that although it seems like the whole movie will be the revenge story, it actually takes a while before it happens. The movie is basically split in two halves. The first half is mainly focussed on the character of Mandy (Andrea Risebourgh), Mandy and Red (Nicolas Cage), and Jeremiah (Linus Roache) and the Children of the New Dawn. Usually a revenge movie would have the whole revenge part kick in after the first act, however with Mandy, the whole revenge part came in the second half of the movie. You do need to know that going in because otherwise you’re going to be rather bored waiting for Nicolas Cage to kill someone. I actually do like the first half, it does help set the mood and unlike most revenge movies which have one act to set up everything before disaster strikes, you get to spend more time with these characters, so that events later on would have a little more impact. The movie is 2 hours long but I can see how others would feel like its a lot longer. You just have to really have the patience for the movie. The second half kicks the pacing into high gear, as it’s really the revenge section, where Nicolas Cage goes on his revenge path and it’s just insane and entertaining. Mandy is a hard movie to pin down to a singular genre, because it’s an arthouse film, a horror film, a revenge film, it’s multiple things at once.

Nicolas Cage delivers one of his best performances here. For the first half of the movie he is pretty subdued and unassuming. In the second half however he goes into a huge Cage rage, delivering one of his craziest performances yet, and that’s saying a lot. If you’re looking for a bunch of entertaining Nicolas Cage freak out moments, you’re going to get that in the second half. However it’s not just “here’s Nicolas Cage freaking out”, his reactions actually works with the character, you aren’t just entertained by his freak outs. With that said, there are also plenty of hilarious and wonderful Nic Cage moments that some people are going to love. I can’t think of anyone else who could’ve played this role, Cage is perfect for the role. Also good is Andrea Riseborough as the titular character Mandy. She has a real presence to her and her chemistry with Nicolas Cage is believable. We don’t really learn a ton about the two characters but it’s enough. Also deserving of some praise is Linus Roache as Jeremiah Sand, the cult leader and villain of the film, his performance really worked well.

This is the first film I’ve seen by Panos Cosmatos, I know he’s previously directed a movie called Beyond the Black Rainbow but I hadn’t seen it yet. Having seen Mandy, I need to watch it soon because his direction and style is really great and one of the most distinct parts of the movie. This is a very visually stunning movie. Plenty of people have described this movie as being like a drug trip and it really does feel like that. There’s a lot of bright vivid colours, particularly red, that are very apparent throughout the film. So many parts of the film feel like a giant painting, or a heavy metal album cover. Even outside the colours, there’s some moments that really feel trippy, such as a scene between Mandy and Jeremiah, which feels really surreal. There are even some brief animated moments, which would be out of place in any other movie but it works well enough here. It is also a very bloody and violent movie, you get to see Nicolas Cage deliver vengeance. There are some extremely gratifying scenes in the second half, one of which features a chainsaw fight between Cage and someone who has a bigger chainsaw than him. Mandy also has a score composed by Johann Johansson and it’s really beautiful and sets the tone of the movie really well. It’s also his last score, and he really ended it on a great note. A lot of what is seen could be described as being “very metal”. There’s a biker gang called the Black Skulls and they look like the Cenebites from Hellraiser. If you’re a big metal fan, you’re going to have a blast with Mandy. With all the visuals and the sound, all of it is enhanced and improved by watching it in a theatre. 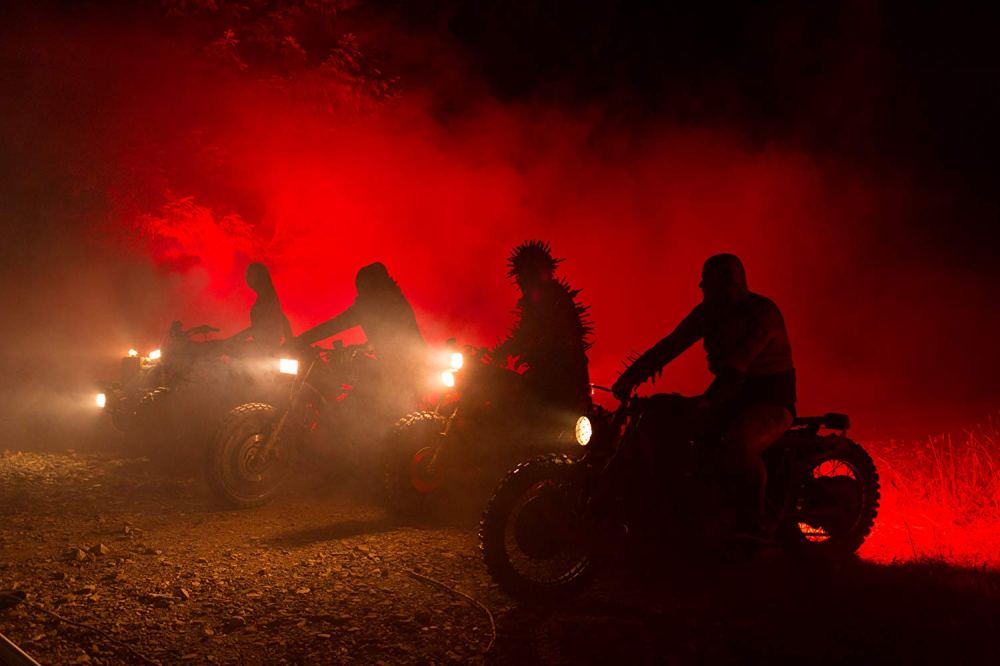 Mandy is definitely not for everyone, it is a really slow movie (especially for the first half), it is heavy on its direction and style over the story and it just won’t work for everyone. However it personally really worked for me, the performances (especially from Nicolas Cage) were great, Panos Cosmatos’s directing style was visually beautiful and it was such a great experience for me. I will say that if you’re going to see it, try to see it in cinemas (I know its difficult), you really get more of the experience that way. Mandy is one of my favourite films of 2018 and I’m definitely going to need to check out Panos Cosmatos’s past and future work.