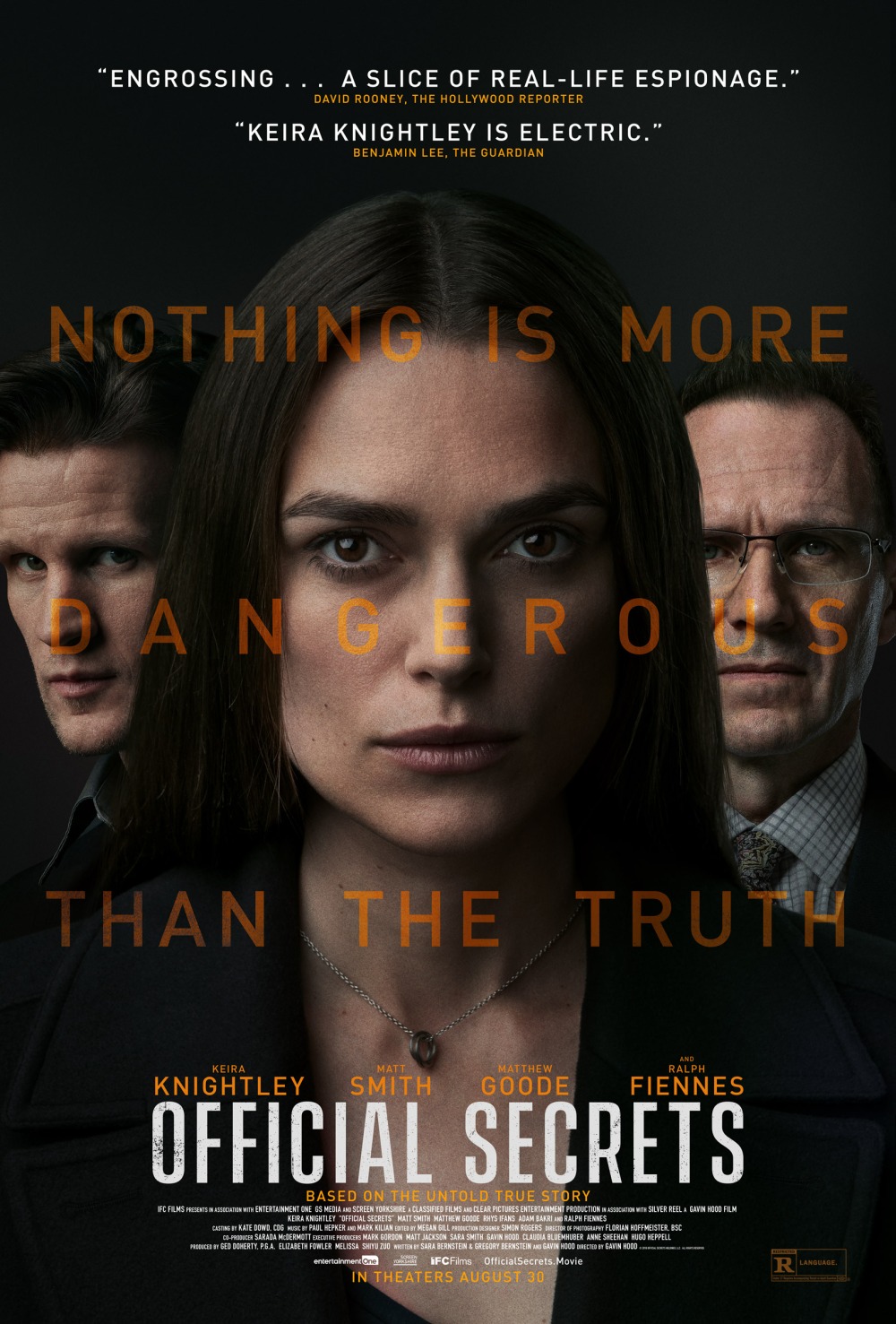 One day in 2003, in the lead up to the Iraq War, British intelligence specialist Katharine Gun (Keira Knightley) receives a memo from the NSA with a shocking directive: the United States is enlisting Britain’s help in collecting compromising information on U.N. Security Council members to blackmail them into voting in favor of an invasion of Iraq. Unable to stand by and watch the world be rushed into war, Gun makes the gut-wrenching decision to defy her government and leak the memo to the press.

Although there wasn’t a lot of widespread attention given towards Official Secrets, I had been hearing a small amount of positive buzz for it. The premise certainly sounded intriguing, as was the cast assembled for it, so I was interested in checking it out for sure. Having finally seen it, I can confirm that Official Secrets is really good, a tightly directed political thriller, and I don’t know why it’s not receiving much more attention. Worth watching for sure.

Admittedly, Official Secrets starts off a little slow to begin with. It even takes a while for the information to leak and then be published in the story. From that point onwards however, the movie really picked up from being pretty good, to really good. It shows the perspectives of Katharine Gun, who leaked the information, as well as the journalists who break the news. As someone who never knew about this story, it was very interesting and most of all informative watching all of it unfold on screen. It is maddening watching this at times as you see what happened, as it should be given that this really happened in real life, and the story is told as honestly as possible. It’s quite easy for big budget political thrillers about real life stories like this to make up things about what happened just for dramatic purposes. However from what I can tell, it stays as true to the real life story as it possibly can. In the second half it becomes really tense, but it never overplays it, it feels very grounded in reality. Now it is definitely more informative than entertaining, while it’s not one of the most gruelling watches or anything, it’s not exactly fun to watch. But as that type of political thriller, it really succeeds well.

The talented cast all do a great job and are among the highlights of Official Secrets. The main lead is that of Keira Knightley, who gives one of her best performances of her career as Katharine Gun, she’s very believable in her role. However it’s not just her who works, the movie also has Matt Smith and Matthew Goode as journalists, Ralph Fiennes as Katharine’s new lawyer, Adam Bakri as Katharine’s husband, and others like Rhys Ifans and Conleth Hall. All of them play their roles believably, and they really added to the movie.

Gavin Hood directs this very well, it’s a great looking movie and it’s been put together solidly. As I previously said, the scenes of tension are quite effective, without being too overbearing and overblown. It’s all directed at the right level required for the story really, keeping your interest and attention without trying to make it flashy or pretty for the audience.

Official Secrets is one of the most overlooked movies of the year, and it really should be seen by more people. It’s directed and written well, the cast are great, particularly Keira Knightley, and it’s an important story that needs to be known and seen. Watch it for the performances at the very least. Definitely don’t miss it, and see it as soon as you can.