Members of the crypto-zoological agency Monarch face off against a battery of god-sized monsters, including the mighty Godzilla, who collides with Mothra, Rodan, and his ultimate nemesis, the three-headed King Ghidorah. When these ancient super-species-thought to be mere myths-rise again, they all vie for supremacy, leaving humanity’s very existence hanging in the balance.

Godzilla: King of the Monsters was one of my most anticipated movies of 2019. I liked the first Godzilla, even with some of its minor problems it wasn’t enough to take away from the overall experience, and I don’t think it’s appreciated as much as it should be. With the trailers showing off it having more monsters and some stunning visuals, I was looking forward to it. I have heard that some reviews from people have been fairly mixed, however I personally really liked it.

King of the Monsters is the sequel to the first Godzilla in 2014, however both films are completely different from each other. One of the criticisms of that first movie was the focus on the human characters, and that it spent too much time with them. I’m aware that when it comes to monster movies human beings aren’t really the highlight, and unless they are all played by Bryan Cranston, will generally feel like standard characters. However, I still think that humans should have a part in the story. The humans still have a presence in the movie, and while it’s not the strongest part of the movie, I still liked their storyline. On another note, I like how Monarch as an organisation plays a big part in the movie. They’re like SHIELD from Marvel except its involved with large monsters. The tone is not as dark as the first movie, it is more campier, contains more humour and is about what you would expect from a typical blockbuster. Some people hated that Godzilla didn’t have much screentime in the 2014 movie. With King of the Monsters however, Godzilla gets more screentime, and especially the newer monsters. I am not familiar with the Godzilla series but it seemed to have double downed with the classic monsters, so I think people who are long time fans of Godzilla will appreciate all that. Storywise the movie is alright, it falls into many of the typical blockbuster tropes but you’ve come to expect that at this point. It’s also worth staying around to watch the credits, as well as the post credits scene, as they hint in the potential next direction for the series.

As I said earlier, the human characters aren’t anything special, but the cast all do a good job in their roles. Kyle Chandler, Vera Farmiga and Millie Bobby Brown are the leads, and while they aren’t delivering the best performances of their careers or anything, they do more than commendable jobs here. Ken Watanabe, Sally Hawkins and David Strathairn are the only returning characters from the first Godzilla and all play their parts well. Watanabe has been a highlight in this series and he also has some great moments in this movie. Charles Dance’s character is a bit underdeveloped and doesn’t have a lot to him outside of being a minor human villain, still Dance plays him well. 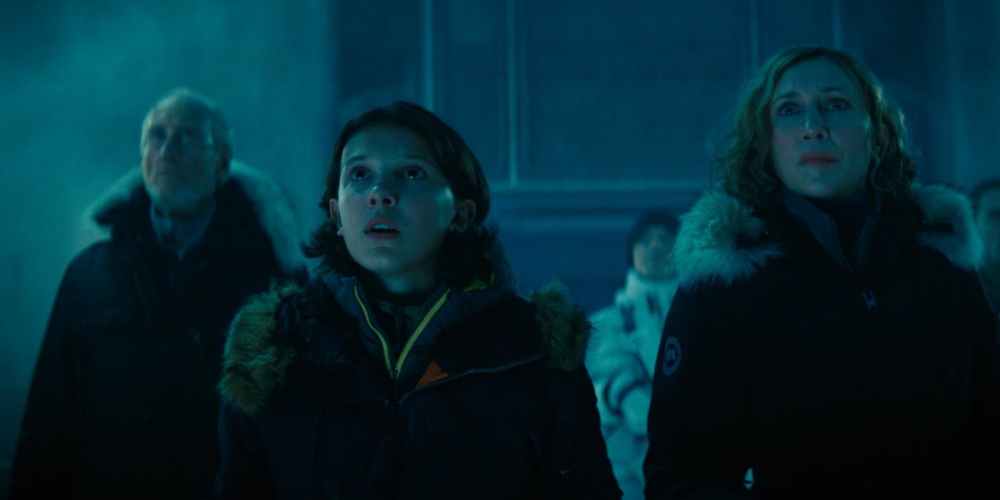 I’m not familiar with director Michael Dougherty’s work outside of Krampus, but his work on Godzilla was good. This is a visually stunning movie, much more colourful than the 2014 film. The visual effects and CGI are phenomenal, it really is worth seeing on the big screen. Like in the previous movie, the monsters are showcased really well. You see a bunch of them, on top of Godzilla, other monsters like Mothra, Dhidorah and others are shown well, very powerful and threatening. The third act is one of the most enthralling third acts in a blockbuster in recent years that I’ve seen, everything is on an even larger scale. If you thought the destruction in the first movie was big, you aren’t prepared for what King of the Monsters does has in store for you. I’ll just say that I’m not sure how they’ll top this with Godzilla vs Kong, it’s practically impossible. The score by Bear McCreary is also great and was perfect for the movie.

It seems like people will be split on King of the Monsters. If you loved the serious and bleak take on Godzilla with the 2014 movie, you might be missing a lot of what you loved in that. However, if that movie you found didn’t have enough Godzilla and monsters content, King of the Monsters seems like it’s right up your alley. Personally, I feel like both movies exceeded well at the types of movies they were going for. Again, I’m not sure how they’ll be able to pull off Godzilla vs Kong at this point but I’m still there for it.