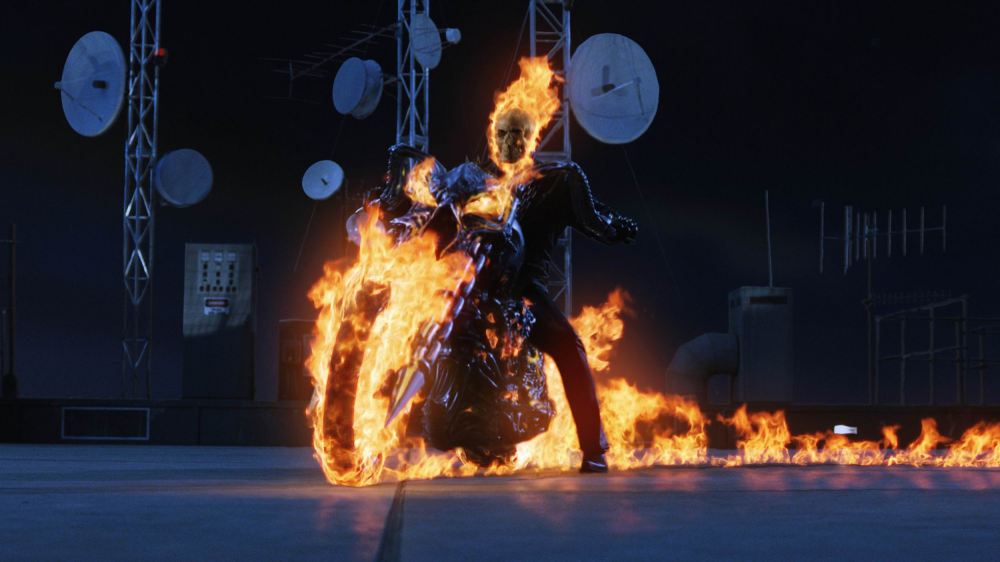 In order to save his dying father, young stunt cyclist Johnny Blaze (Nicolas Cage) sells his soul to Mephistopheles (Peter Fonda) and parts from the pure-hearted Roxanne Simpson (Eva Mendes), the love of his life. Years later, Johnny’s path crosses again with Roxanne, now a reporter, and also with Mephistopheles, who offers to release Johnny’s soul if Johnny becomes the fabled, fiery Ghost Rider, a supernatural agent of vengeance and justice. Mephistopheles charges Johnny with defeating Blackheart (Wes Bentley), Mephistopheles’s nemesis and son, who plans to displace his father and create a new hell even more terrible than the old one.

Ghost Rider has been called a terrible movie and one of the worst comic book movies and although I found some good elements in it, I don’t think it’s a good movie. The acting isn’t that special and the story isn’t interesting or anything special either. What does save it from being completely dull are the Ghost Rider scenes which are entertaining enough to warrant me calling this a guilty pleasure.

I really wasn’t that interested in the story plot and what was going on. I would’ve liked to see Ghost Rider more in the movie because his scenes are the best in the entire movie, apart from his dialogue not being written that well, mostly consists of one liners. Unfortunately, Johnny turns into the Ghost Rider for the first time 40 minutes in; he should’ve been introduced earlier. There is also a romance between Johnny and Roxanne but it just feels unnecessary, forced and not done that well. Another problem was that none of the villains seem to do many threatening things, nor did they seem to have that much power, even Peter Fonda’s character doesn’t seem to have that much power. The henchmen were even worse, only posing a threat to Ghost Rider for a little moment before being defeated. If you are planning to see Ghost Rider, don’t see it for its story as it’s not that good.

Nicolas Cage is in this movie and he’s usually most known for being very over the top in his acting, however here, he keeps it subdued, with the exception of a few scenes. Unfortunately he was a little boring and wasn’t very memorable. If Cage had more over the top moments it would at least make his performance more entertaining. Eva Mendes was okay in this movie but I didn’t find her very memorable and I didn’t personally find any chemistry between Cage and Mendes, which doesn’t help as the romance wasn’t even written well to begin with. Wes Bentley plays the villain of this movie, and is unfortunately one dimensional, so he doesn’t feel that dangerous. Peter Fonda and Sam Elliot gave the best performances in the movie, they weren’t anything that great but they were good enough.

The cinematography was okay for me. Like I said earlier, I liked watching Ghost Rider when he was on screen; something about the look of him makes it great to watch. One of the best scenes in the movie involved Ghost Rider and the song “Ghost Riders in the Sky”.

Some have called Ghost Rider one of the worst comic book movies of all time; even though it’s definitely not a good movie, it’s nowhere the level of Catwoman or Batman and Robin. There are also some enjoyable moments whether it may be of Cage or the actual Ghost Rider that has made this movie a slight guilty pleasure for me. From what I’ve heard, Ghost Rider: Spirit of Vengeance is worse; I’ll just have to take a look at it for myself. Overall, Ghost Rider is not terrible but it’s not that good either.