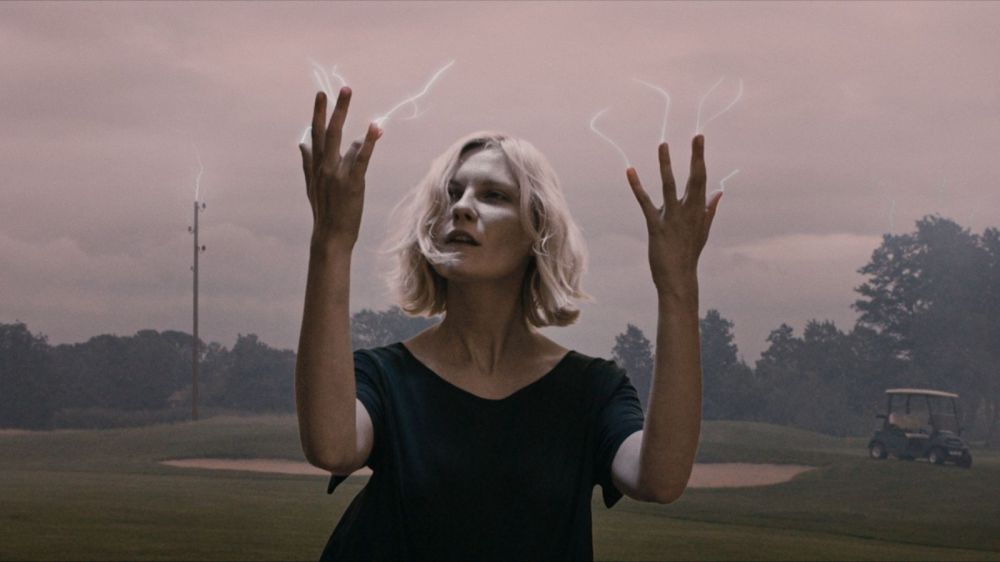 On the night of her wedding, Justine (Kirsten Dunst) is struggling to be happy even though it should be the happiest day of her life. It was an extravagant wedding paid for by her sister (Charlotte Gainsbourg) and brother-in-law (Kiefer Sutherland) who are trying to keep the bride and all the guests in line. Meanwhile, Melancholia, a blue planet, is hurtling towards the Earth. Claire, Justine’s sister, is struggling to maintain composure with fear of the impending disaster.

I had heard about Melancholia for a while, I heard that it was Lars von Trier’s most accessible film yet, which wasn’t an easy thing to narrow down to considering his filmography. After watching and mostly liking his two part film Nymphomaniac, I decided to check this movie out. Melancholia is a great and impactful film about depression, with great performances and some really good direction. It’s not for everyone and is a bit overlong, but I thought it was really good.

Melancholia is pretty long at around 2 hours and 15 minutes. The film is split into two parts, one titled Justine (Kirsten Dunst) which is focussed on her wedding, and the other is titled Claire (Charlotte Gainsbourg), which is more focussed on the approaching planet of Melancholia potentially being the end of Earth. I don’t have a lot of problems with the movie but I will say that it might be a little overlong, it’s mostly with the first half. The first half is important in showing glimpses of Justine’s depression and all that, however this wedding section feels a little too drawn out and could’ve been shortened quite a bit. You do need to know going into Melancholia that it’s pretty slow paced, particularly early in the movie. Despite the plot sounding large scale on paper, it really is a character driven movie, and is more intimate than you’d think it would be. You have to really be focussed on everything that’s going on or you’re just going to lose interest in it all, I was and I had a good time with it. Melancholia is also a very artsy movie, with the way some of it is written and the way certain things are shown, and that could turn people off, for me it didn’t really. The first 8 minutes is full of just slow moving images and video, it could annoy some but personally I though it was fantastic and really haunting. Now know that I’m basing it off Nymphomaniac and what apparently is in von Trier’s other movies, but Melancholia doesn’t have this overwhelming feeling of just absolute bleakness that’s in his other movies. Nor does it force a ton of thematic elements all at the audience or anything like that. It’s much more straightforward, with the main theme being really about depression, and the parallels of Justine’s depression with the looming planet. Despite it being Lars’s most accessible movie, it’s not necessarily an easy watch, it’s a rather sad movie (as you can gather from the title, it’s not just in reference to the approaching planet) and as mentioned earlier, it’s a bit of a slow burn. There’s a reason why this movie along with Antichrist and Nymphomaniac have been called the Depression Trilogy. Without spoiling anything, despite knowing the ending, the last scene of the movie was really impactful and effective.

The acting all around is fantastic. Kirsten Dunst gives a career’s best performance in the lead role of Justine as someone with depression. A big part of the film is her character going through depression and she carries it incredibly well. It’s not a very showy performance, she just really embodies the character incredibly. Charlotte Gainsbourg is about as equally great as Dunst’s sister Claire. The relationship between the two sisters are one of the driving forces of the movie, especially how differently the two react to the looming threat of Melancholia. Justine seems to feel nothing, whereas Claire is constantly worried about it. The rest of the supporting cast are all great as well, from Kiefer Sutherland as Justine’s brother-in-low husband, Stellan Skarsgard as her boss, John Hurt as her father, Charlotte Rampling as her mother and Alexander Skarsgard as her husband. Most of them are just in the first half, we do however also get Sutherland in the second half, and his performance in Melancholia might be one of his best. The only thing about the casting that bothers me a little is that both Stellan and Alexander Skarsgard are in this movie, but they don’t play father and son or relatives or anything, so it’s a little distracting.

It seems like no one directs like Lars von Trier, his work on this movie is nothing short of fantastic. The cinematography is stunning and beautiful, and is done incredibly well. Some of the editing is a little weird where there are unnecessarily a lot of cuts done in many scenes, which is something that von Trier does sometimes. I guess it’s something that you have to get used to when it comes to his films. Throughout the film there is this sense of dread, with the whole thing about the planet Melancholia potentially going to destroy Earth, and it’s effectively haunting. While his films are usually more gritty and grounded, this film does involve some larger scale elements, with the whole film surrounding a planet potentially colliding with Earth. Now it’s not a full on sci-fi movie and most of it doesn’t have a bunch of crazy visuals, but nonetheless these big visual moments are also done really well.

Melancholia is probably the easiest of von Trier’s films to digest, by far the most accessible. I know this, because when it comes to recommending the movie, I don’t have to necessarily give a big warning about what his movies are like and all that. It is still not the most fun film to watch and it is a little overlong but it’s an incredibly well made and directed film and the performances are fantastic, especially from Kirsten Dunst and Charlotte Gainsbourg. If you’re open to depressing slow-moving art films, I’d say definitely give Melancholia a chance, it’s really great.