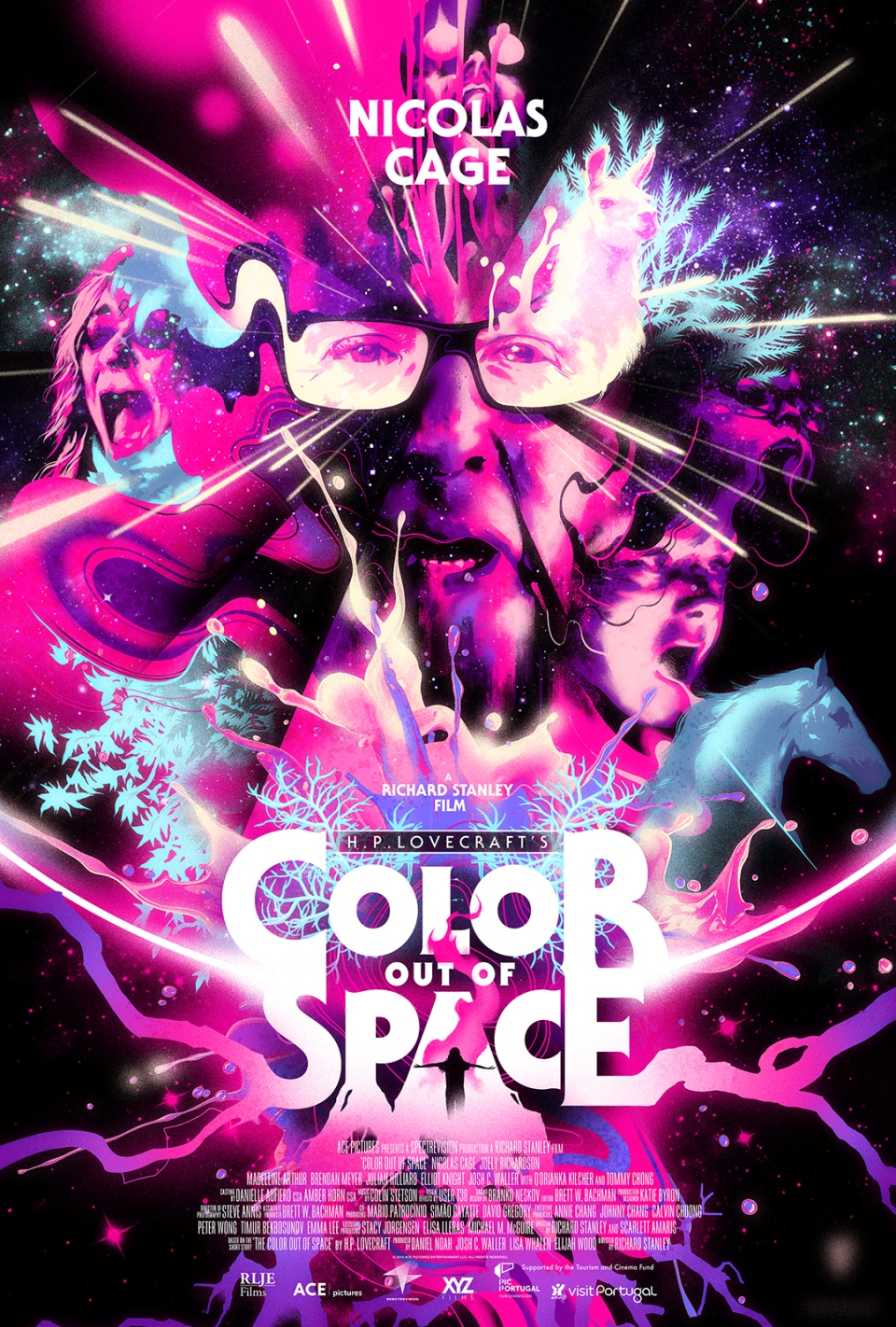 After a meteorite lands in the front yard of their farm, Nathan Gardner (Nicolas Cage) and his family find themselves battling a mutant extra-terrestrial organism that infects their minds and bodies, transforming their quiet rural life into a technicolour nightmare.

Color Out of Space was a movie I was aware of for a little while. All I knew about it was that it’s a science fiction horror starring Nicolas Cage, that was an adaptation of a short story written by H.P. Lovecraft. I’m not familiar with Lovecraft’s work, but I’m aware of his influence on art, entertainment, and so much more, so I was curious to see how this movie would turn out. Color Out of Space is a trippy, weird, and visually stunning ride that I was glad to be on, even with all its issues.

I never read Lovecraft’s The Colour Out of Space, but from what I’ve heard from some, it seemed to have been adapted well to the big screen (or at least as best as possible). The script is not very strong (especially when it comes to the dialogue), but it works okay enough for this story. It’s generally played seriously, but there’s a bit of a B-movie feel to it at the same time. The movie starts off a little slow but that was the right pacing for this movie instead of just jumping straight in with the weirdness. You begin to see little changes over time that the characters and the general location experience. The second half is where it goes nuts and is definitely the highlight section of the movie. I won’t go into too much depth about what happens in the story, it’s definitely one that’s better experienced for yourself.

The cast for the most part aren’t great but they play their roles as best as they could. Let’s start with the obvious with Nicolas Cage, who seemed to be a perfect fit for the role. He starts off as some geeky and soft spoken and amateur alpaca farmer, and over time just becomes unhinged and crazier. Of course he shines in some very entertaining moments, in some of the loudest and angriest scenes his delivery of his lines is like a mix of his character from Vampire’s Kiss and Donald Trump. It’s fun to watch, and for those looking for crazy Nic Cage, there’s plenty of moments that you’ll definitely love. The rest of the main cast making up the main family with Joely Richardson, Madeline Arthur and Brendan Meyer are fine, but are held back by some lacklustre writing. One thing that the movie does is that it can get away with dumb decisions made by the characters in the context of the movie, given that the meteor seems to make people do illogical and random things.

I’ve not seen any movies from director Richard Stanley, but he generally handled this movie well. The editing early on was a little messy, but it got better as it progressed. One thing that was a little weird was that the titular colour in the actual movie (and book) was described as a colour that couldn’t be described. Now in a book you can get away with that, but given that film is a visual medium, they had to show that, and they settled on pink. Now for me that worked fine enough but it’s worth pointing out. While CGI very well could’ve ruined a lot of the movie, it actually sort of works here. The movie can be visually stunning and a feast for the eyes, especially for the second half when things get very weird. The practical effects are even more impressive when they are present. The score by Colin Stetson is also pretty effective.

Color Out of Space won’t work for everyone, it’s a little messy and the script could’ve been a little stronger. However I liked it on the whole, it’s directed well, visually stunning, features a completely insane second half, as well as another gloriously crazy Nicolas Cage performance. If the movie looks like something you may be interested in, check it out for sure.