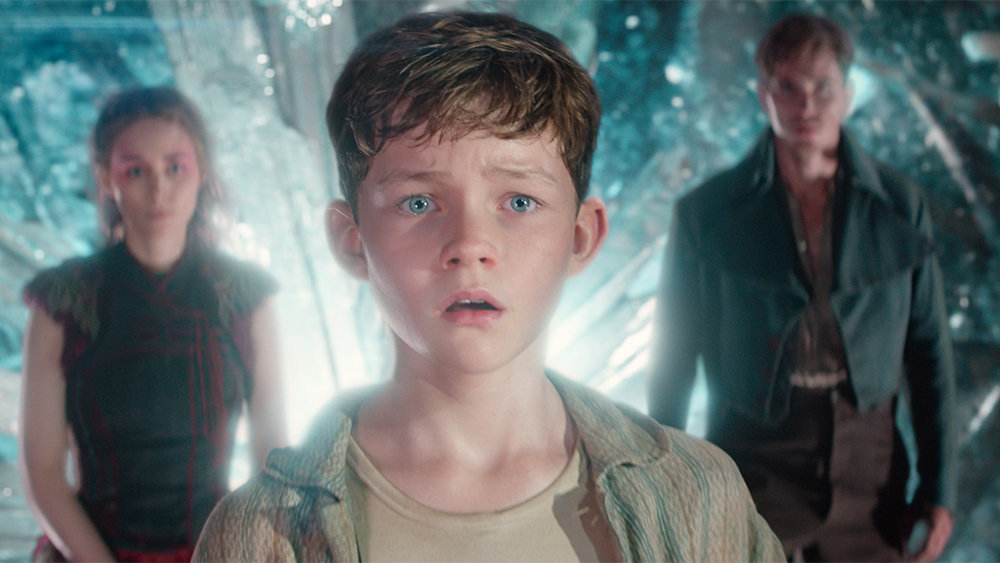 Living a bleak existance at a London orphanage, 12 year old Peter (Levi Miller) finds himself whisked away to the fantastical world of Neverland. Adventure awaits as he meets new friend James Hook (Garrett Hedlund) and the warrior Tiger Lily (Rooney Mara). They must band together to save Neverland from the ruthless pirate Blackbeard (Hugh Jackman). Along the way the rebellious and mischievious boy discovers his true destiny, becoming the hero forever known as Peter Pan.

Pan looked like it had a lot of potential, so I was a little disappointed when it was ‘panned’ by most people, because I was really curious to check it out. After seeing this much hated movie, I have to say that it is… okay. I’m not going to act like it’s a great movie, I’m not even sure I’d consider it good. It has many questionable aspects of it. But at the same time it has some things that I like with a couple of the actors, the action and the general feel, I didn’t really feel bored throughout. It’s a passable movie.

The story for Pan is not very good. This movie tries to force in a prophecy story for Peter Pan and it is completely unnecessary for it to do this (and its completely cliché). You’ve seen this story before and you’ve seen it done better. Also this film just has some random moments, such as the infamous moments when people start singing “Smells Like Teen’s Spirit” and “Blitzkreig Bop”. I’m guessing that director Joe Wright wanted to be unique by blending modern elements into this story but it just felt incredibly out of place. This movie is basically the first instalment of a trilogy for the origin story for Peter Pan. Unfortunately because this movie flopped and was panned, the sequels were cancelled, so looking at the ending of this movie now is like looking at the last scenes of The Amazing Spider-Man 2. But even in this movie, there are some elements that didn’t work that well. For example, at no point does Hook feel like he could become the villain Captain Hook in the future. There’s never a dark edge to him. Despite this and countless other issues with the movie, it was still watchable, if annoying at times with the constant amount of times they didn’t do things right. I was reasonably entertained throughout, I wasn’t really bored at any point. So at least if you are just wanting an above average family action fantasy film that’s entertaining enough, you’ve got that with Pan.

Levi Miller is playing Peter Pan and he is trying his best here but I have a feeling he wasn’t given enough direction, he was okay overall. The reason to see this movie is Hugh Jackman as Blackbeard, he absolutely steals the show, chewing up scenery in every single scene he’s in. Jackman is effortlessly entertaining in this movie and was used to his fullest potential (in that he was effective as a fun, over the top villain)/ A controversial casting decision was Rooney Mara as Tiger Lily (I didn’t have an opinion on it since this is the first time I’ve seen Tiger Lily in anything). All I will say is that Rooney Mara was good in this movie, probably one of the best performances in this movie alongside Jackman. Her choreography in her action scenes was also great. I will say that she did feel kind of out of place, she still acted well in her role. If there’s a negative acting wise I will say that it’s Garrett Hedlund as Hook. Hedlund is a fine actor but he’s not good here, he is kinda over the top in the annoying kind of way, and as I said earlier there were no hints of villanouy in him, so it’s hard to buy him becoming Peter Pan’s adversary in the future. Oh and Cara Delevingne shows up in a 1 minute cameo as twin mermaids, which was kind of pointless.

The direction of Pan was a bit of a mixed bag overall. A lot of the style and world of Neverland I liked, some of it was hit or miss though. The visual effects are very poor, it looks incredibly fake and embarrassing, especially when it comes to the green screen. It’s actually kind of embarrassing. Aside from that, the action itself was filmed well, with the fight scenes being quite entertaining. The score I will say is great, if only it was used in a much better movie.

Pan is not really that good as a movie but it’s not really bad either. The CGI was very bad, the story wasn’t particularly interesting or special. However I liked Hugh Jackman, Rooney Mara and the action scenes (minus the effects), I wasn’t that bored throughout, it was passable, and I would be lying if I said I wasn’t entertained during it. I say check it out if you’re interested but don’t expect anything great.