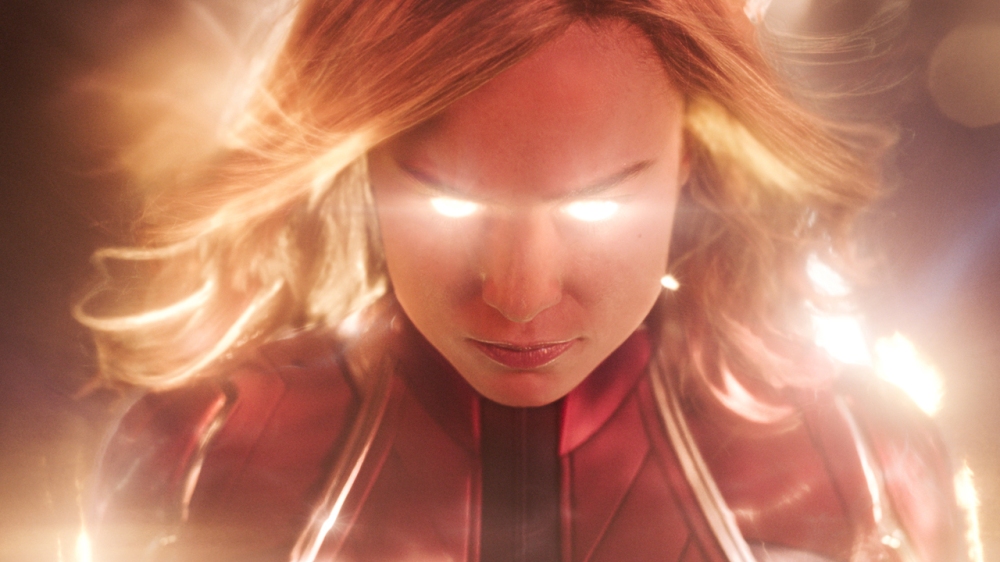 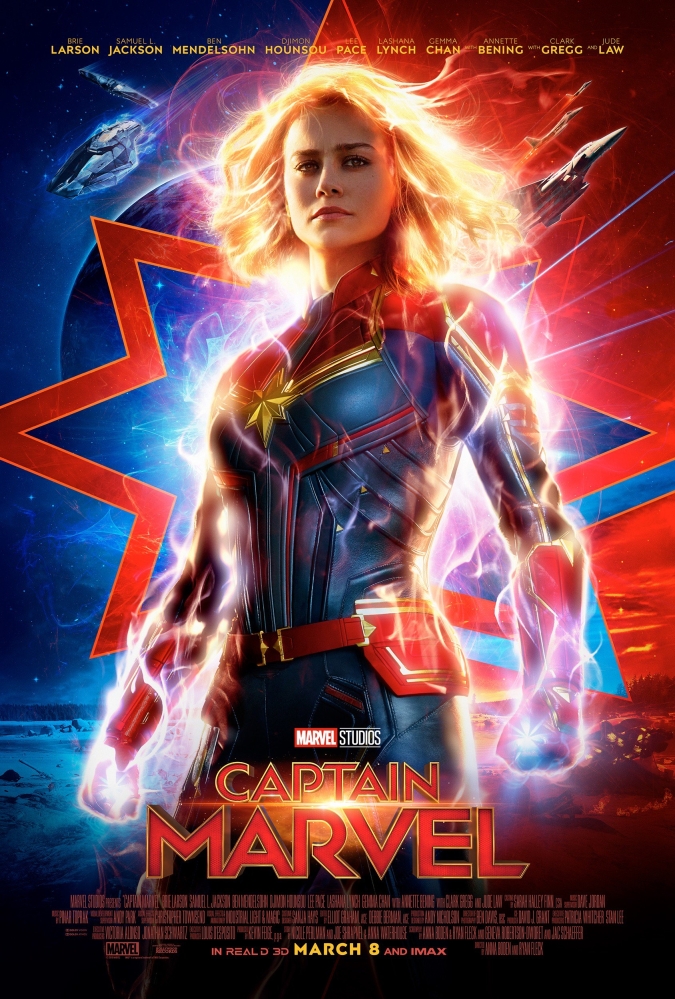 Captain Marvel (Brie Larson) is an extraterrestrial Kree warrior who finds herself caught in the middle of an intergalactic battle between her people and the Skrulls. Living on Earth in 1995, she keeps having recurring memories of another life as U.S. Air Force pilot Carol Danvers. With help from Nick Fury (Samuel L. Jackson), Captain Marvel tries to uncover the secrets of her past while harnessing her special superpowers to end the war with the evil Skrulls.

There’s a lot of hype that was going into Captain Marvel, and there was a lot of potential. On top of it featuring familiar MCU characters like Nick Fury and Phil Coulson a couple decades earlier and featuring the additions of great acting talent with the likes of Brie Larson, Ben Mendelsohn and Jude Law, it is covering a key character in the upcoming Avengers: Endgame. While a lot of the MCU movies follow familiar beats (especially in the trailers), I’m usually hyped for them nonetheless. However when it came to the Captain Marvel trailers, I just felt considerably underwhelmed, which had me a little nervous because usually the marketing for these movies are decent at least, and was starting to wonder whether maybe this movie would be one of the lower tier movies in the MCU. I’m happy to say that the trailers did not do the movie justice. While not groundbreaking, Captain Marvel was quite a lot of fun and was a lot better than what I thought the movie would be.

If you are a fan of the MCU, then you don’t even need to look at my review, go out and see it right now. The first act is a little rough, it’s not bad and the pace is reasonably fast, but it didn’t really have much of my interest. It only sort of picks up as the second act starts, when Captain Marvel arrives on Earth and especially when she starts interacting with Nick Fury. At the halfway point however when certain reveals happen, that’s when the movie considerably improved and I knew that this movie was actually quite good. It’s because of this aspect that manages to separate itself from other MCU origin stories (even though there are some similarities that can be seen). To the movie’s credit, it kept the plot considerably tight. While most of the MCU movie recently have been having runtimes as long as 130 minutes in length, Captain Marvel kept it shorter at 2 hours. While it didn’t have me riveted early in the movie, it felt like every scene here had an actual purpose and moved the plot along. As the movie is in the 90s, there a lot of references to things in the 90s. Most of it was enjoyable but it does occasionally slip into relying on it too much. Another thing I’ve noticed was that this movie tries so hard to link things to the Avengers (in ways that I won’t spoil), many of them are really on the nose but I guess I’ve become used to that after watching 21 of them now. There is one connection which I already know a lot of people don’t like, and while it’s a bit funny, it probably went a little too far and was just silly, and not in a good way. Final note about the story is that it unfortunately feels like a bit of a filler movie. After Infinity War, there needed to be a movie establishing who Carol Danvers is. While they have done that, they really didn’t go further than that. Most of that is to do with the character of Captain Marvel herself, which I’ll get to in a bit. Last thing to say, there was applause at my screening for the opening Marvel credits, and for very good reason. Also be sure to stick around for the mid and post credits scenes. 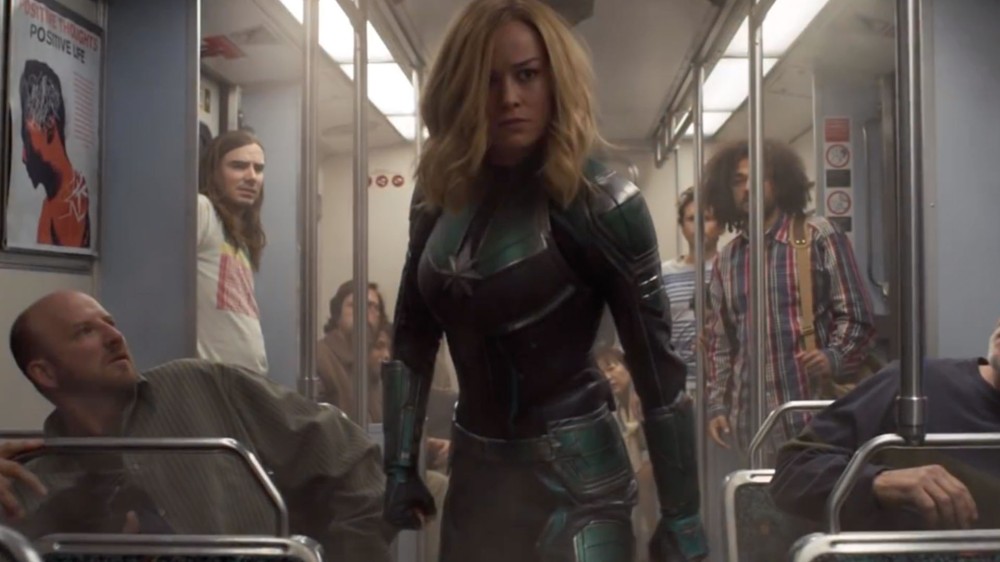 One of the complaints of the Captain Marvel trailers was that Brie Larson was coming across as being a little bland, and I’ll admit that I could see what they’re talking about. Much like the movie, the trailers really didn’t do her justice because she’s really good here. However, she is a little held back by the writing. Larson performs what she is given and she definitely does well here, very likable and believable enough in the role. However she wasn’t as interesting as I hoped she would be. She was a pretty easy lead to follow and it established her character in a basic way, but it didn’t do more than that, I wasn’t as invested in the story as much as I wanted to be. This is all on the writing however. It works fine enough for her and this movie and isn’t bad by any means. I just have a feeling she’ll be like Thor and Doctor Strange, who were pretty good in their debut appearances in the first solo movies but in later film appearances grew and became much more interesting and better characters. Samuel L. Jackson plays a much younger Nick Fury and actually gets to be one of the main players of the movie, which is nice to see considering that in most of his appearances in the MCU he’s been a supporting role. He’s definitely a very different Fury to what we’ve seen in the past movies but that works for Jackson. The playoff between him and Brie Larson was really entertaining to watch and was among the strongest parts of the movie (no surprise considering how the strongest part of the director’s previous movie Mississippi Grind was the chemistry between the leads Ben Mendelsohn and Ryan Reynolds, they really do well at character interactions). The scenestealer of the whole movie however was Ben Mendelsohn as the lead Skrull. Mendelsohn is no stranger to villainous characters but this is one of his most standout performances and does a lot here (see for yourself why that’s the case). On a side note I thought the handling of the Skrulls was really great (no spoilers). Other supporting members like Lashana Lynch and Anette Benning play their parts. Jude Law was also good here, however I feel like due to his reasonably important role in the movie we should’ve gotten a little more depth from his character. Clark Gregg as Phil Coulson and Lee Pace as Ronan the Accuser were nice to see once again but they really feel just like connectors to the other movies instead of actually having a reason to be in the movie. I mean I guess it made sense showing Coulson given that they are already covering young Nick Fury, but Ronan in this movie could’ve been replaced by any throwaway character, or even just not included in the overall plot. 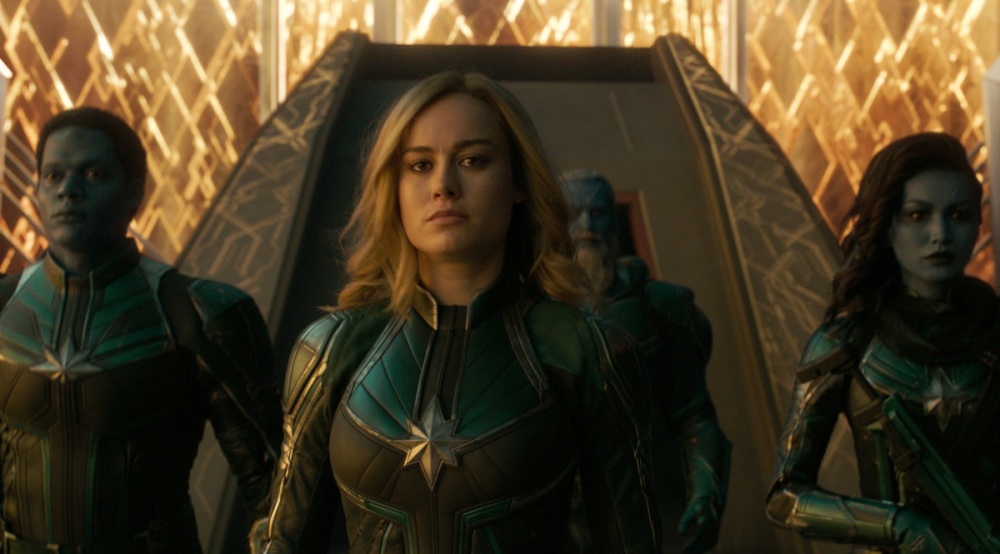 The only movie I’ve seen from directors Anna Boden and Ryan Fleck was Mississippi Grind, and their work here was mostly good. The action scenes were a bit of a mixed bag, it’s mostly to do for the editing. The editing for the movie in general was good but it was very hit or miss when it comes to the fight scenes. The biggest example is the advertised train battle scene, and yes the editing is as bad as it looked in that one released clip. I don’t remember the editing in the later action scenes being as bad but I don’t remember them much outside of Captain Marvel unleashing her powers (which are done quite well to be fair). The visuals effects on the whole are quite good and the highlights really were Captain Marvel’s powers shown on screen later in the movie. The most impressive visual effects however was the de-aging effects on Samuel L. Jackson, which I’m going to be quite honest, is so far the best de-aging effects I’ve seen in a movie. Sure, we had Blade Runner 2049 and the Ant Man movies, but those were for like two scenes max, and Nick Fury is present for the whole movie. Very impressive work here. While most of the movie takes place on Earth, I do like the little bit we see of the other locations. The makeup and costumes were also great, from Captain Marvel’s outfit to the makeup of the Skrulls (which do actually work a lot better in the film than how they appeared in the images). 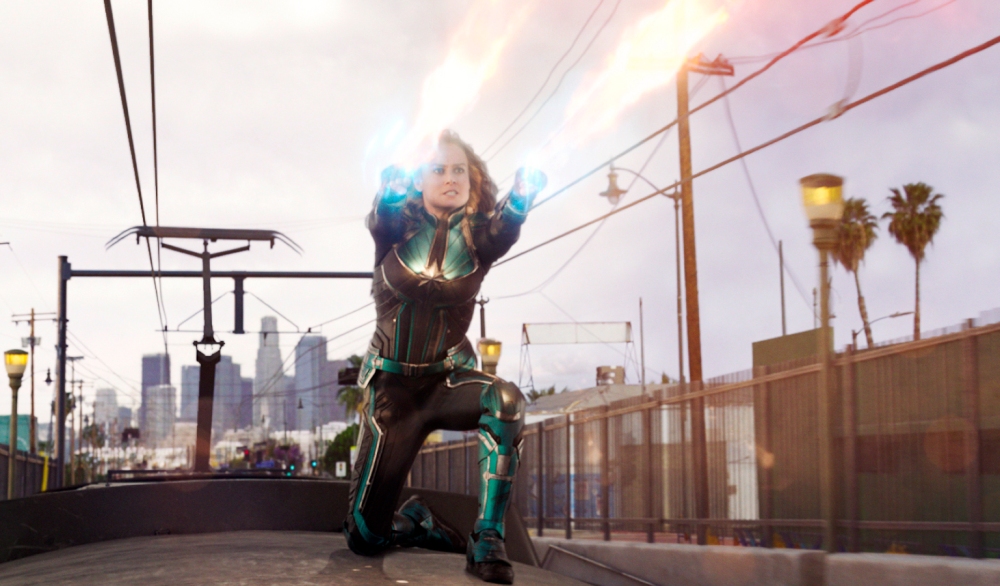 Captain Marvel isn’t one of the best MCU movies but it’s still pretty good. It’s a little rocky to start with and it suffers from feeling like a filler movie, like it’s just there to establish the character for Endgame. Despite some of my issues however, I can’t deny that I had an absolute blast watching this, the performances (particularly from Larson, Jackson and Mendelsohn) were really good, and it does some interesting things with the story that I didn’t see coming. Definitely looking forward to seeing Captain Marvel in Endgame and beyond.