After coming out of self-imposed exile, daredevil operative Xander Cage (Vin Diesel) must race against time to recover a sinister weapon known as Pandora’s Box, a device that controls every military satellite in the world. Recruiting a new group of thrill-seeking cohorts, Xander finds himself entangled in a deadly conspiracy that points to collusion at the highest levels of government.

There’s nothing to say about plot and character, the plot is some generic action movie plot, the characters are cliché, 2 dimensional and don’t have anything to them and the dialogue is horrendous. However you probably already knew that. The question is, is this movie stupidly fun and entertaining? Yes and no. This movie doesn’t take itself too seriously but yet somehow manages to take itself too seriously at the same time. There are a whole lot of preposterous action set pieces, and a lot of this movie is just entertainingly stupid (and at times its just flat out stupid). At the same time there is a constant feeling of self importance throughout the movie. movie constantly feels arrogant with its writing and style. It feels pretentious, and if you ever want to make an entertaining dumb action flick, you can’t make it pretentious. Commando, Broken Arrow and even the original xXx understood this. The way this movie ends feels like its trying to set up a sequel and its just completely embarrassing after actually watching this movie. For the most part however, it is enjoyable. To this movie’s credit, there was a character reveal that I surprisingly liked.

The acting isn’t very good. Vin Diesel plays Vin Diesel again, he’s pretty much like in the first film. However he seems even more of a jackass this time around. It doesn’t help that Xander is constantly being praised by everyone, there are even literally moments where a bunch of random unnamed women just fawn all over Vin Diesel’s body and find him hot, I’m surprised Diesel didn’t have any writing involvement. Xander’s ‘team’ are a bunch of stereotypical douchebags, none of them are particularly likable, some of them end up being annoying. If there is a particularly character that’s sounds out as being annoying amongst all the rest, its Nina Dobrev’s character. There is a particularly random moment with her and a gun in the third act which made me question why I was watching this movie in the first place. Toni Collette looks like she hated being there, and I can’t really blame her. The only one who makes a real impression is Donnie Yen, he was also really good in his action sequences.

The action scenes were entertaining and the stunts look well choreographed but the editing really hurt the final product. There are so many times in the fight scenes where the editing would be quick cutting unnecessarily, its not Taken 3 levels of editing but its still pretty annoying. The style was also pretty obnoxious, as I said it constantly had some arrogant feeling to it and with its direction it constantly feels like it. When each character is introduced, they have some Suicide Squad esque character introduction. The effects were never that good in the xXx movies but you’d at least hope that they would’ve improved, here the visual effects are quite simply horrendous, there are some green screen that is terrible, especially one absolutely laughable moment in the third act.

In the 28th century, special operatives Valerian (Dane DeHaan) and Laureline (Cara Delevingne) work together to maintain order throughout the human territories. Under assignment from the minister of defense, the duo embarks on a mission to Alpha, an ever-expanding metropolis where diverse species gather to share knowledge and culture. When a dark force threatens the peaceful city, Valerian and Laureline must race against time to identify the menace that also jeopardizes the future of the universe.

Valerian was a movie I was curious about. I like some of Luc Besson’s films with Leon: The Professional and The Fifth Element. Also with the cast involved and it being based on a graphic novel that supposedly inspired countless sci-fi stories, I was intrigued as to what the movie would turn out like. Having finally seen Valerian, I feel a little conflicted. Valerian is a bit of a polarising movie, it does some things well but also has a lot of issues. Most of the main actors do quite well in their roles, I was interested in the world and the visuals were beautiful. However the writing is very flawed, from dialogue, to character, to story, there’s a lot of issues. It’s a bit of a mixed bag but I enjoyed it at the same time.

I’ll get this out of the way, the script has a lot of issues. Let’s start with the length, this movie is way too long, it is 2 hours 17 minutes. I don’t have an issue with Valerian being that long but if its going to be that way, the movie should be pretty engaging all the way through, and it really isn’t. This movie at many points could’ve been trimmed down quite a bit. For example, the first sequence with Valerian and Laureline on a mission is mostly decent but its way too long, especially a segment when Valerian’s arm stuck in a box-like device which I swear goes on for over 5 minutes (or at least feels like it). Because of the occasional dragging of the story, I wasn’t paying attention to the movie all the time, near the end it had my attention but for most of the movie it dipped in and out from having my interest to finding the movie to be a drag. Another issue is that this movie relies on way too much on exposition, there are so many moments when people just explain and information dump some things that the audience needed to know. It is hard to accuse this movie of being ‘too sci-fish’ as the graphic novel inspired so many sci-fi stories and movies. Although I gotta give Besson some credit for going all the way with the sci fi aspects, I think he went a little too far with it, and by that I mean the movie is a little weird, not necessarily a bad thing but there were some random moments at times, I didn’t know what was going on (maybe that was the intention). The humour was very hit or miss, and when the humour is a dud, you really feel it. Even though I was reasonably entertained by the movie, I found it hard to care about what was going on, it was predictable and I never felt worried about what could happen. The best part of the script is the world, the world is very interesting, I almost want the planned (and apparently already written) Valerian sequels, just to see more of this world. Overall, the script is a mess, a lot of the plot is fine and the world is nice but there are so many issues in the story, dialogue and pacing that really hold this movie back from being effective. 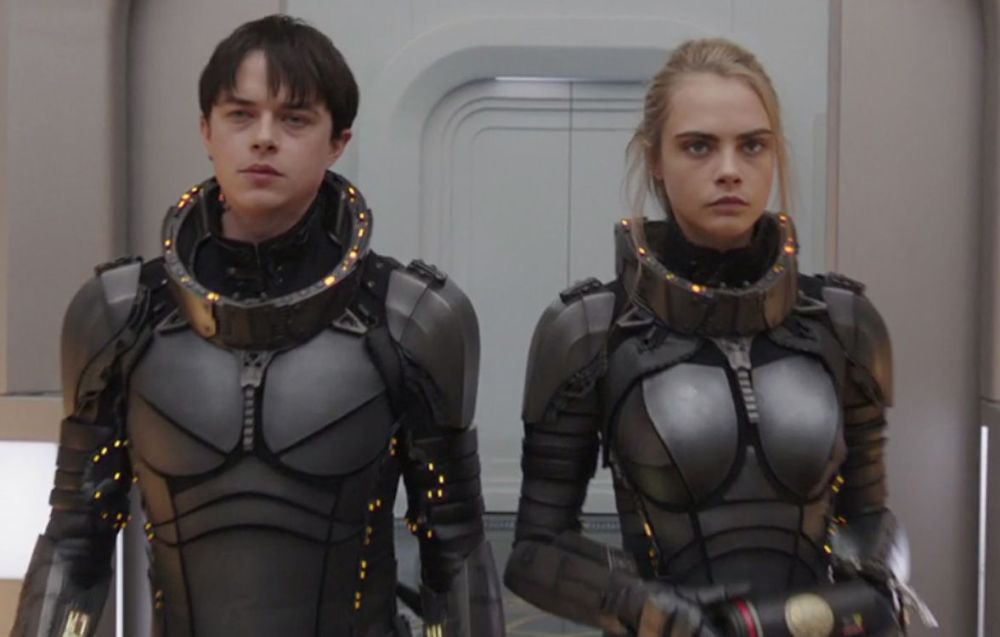 Dane Dehaan and Cara Delevingne were the leads of Valerian and they had good chemistry, however the writing between them is silly and cliché, it feels kind of forced and you don’t really buy the relationship between the two. Dehaan and Delevingne made the relationship between them somewhat work. Dane Dehaan, while good in his role, did feel a little out of place. I couldn’t tell whether it was the writing or if Dehaan was miscast. Delevingne on the other hand fits right into her role well, she was one of the stand outs of the movie. She has charisma, humour and you can buy her in the action scenes, she was one of the surprises of Valerian. Rihanna and Ethan Hawke are good in their short amount of screentime, very entertaining and fun to watch. There are a lot of brief weird characters and out of all of them, those two were the only ones I liked. The rest were just to random and pointless that I didn’t care for them. Clive Owen is a great actor but here he is wasted. He does try to act well but he’s not in the movie a lot and his role is very cliché and typical.

The visuals of Valerian are the best aspect of the film, its such a beautiful looking movie. The world of this movie feels huge and kinda intriguing. At times some aspects of the CGI did feel slightly off, but maybe its because so much CGI is on screen at the same time. The action itself is fast paced and very entertaining. As previously mentioned, this movie is very sci-fish (perhaps too much for its own good) but the designs for everything from the world to the aliens was great. The overall direction really immerses you in this very different world. The style is a little odd at times, but again, that might have been Besson’s intention. 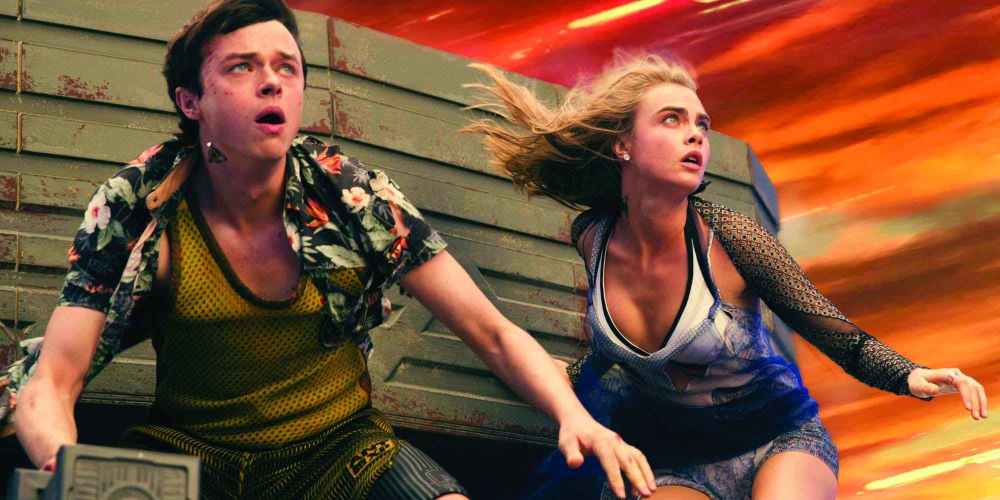 Valerian is a very mixed bag. On one hand it has plenty of writing issues. On the other hand, I liked most of the main performances, the world was great and the visuals were nice to watch. Even though I like Valerian, I can completely understand people who hate it. Along with its many flaws, it is a very weird movie (however I almost kind of respect Luc Besson for going all the way with this movie). Honestly the only thing I can guarantee that everyone will think of the movie is that the visuals look good. Valerian isn’t one of Luc Besson’s best movies, its not even on the level of The Fifth Element but I’d say its better than Lucy. If you are curious enough, check Valerian out, just know that you are going to be watching a flawed, weird and beautiful looking sci-fi flick. And also know that there’s no guarantee that you’ll like it.