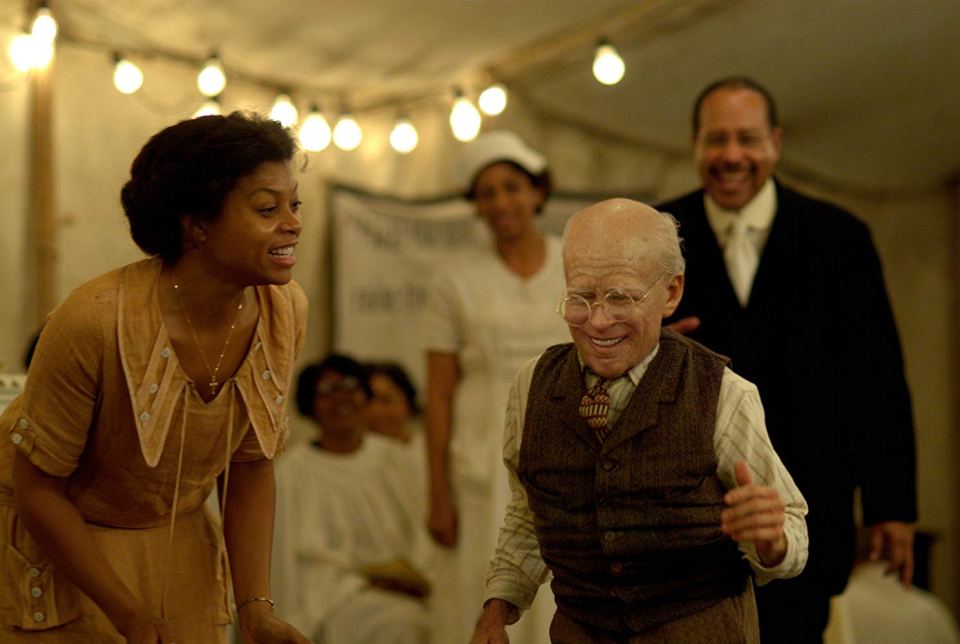 Born under unusual circumstances, Benjamin Button springs into being as an elderly man in a New Orleans nursing home and ages in reverse. Twelve years after his birth, he meets Daisy, a child who flickers in and out of his life as she grows up to be a dancer. Though he has all sorts of unusual adventures over the course of his life, it is his relationship, and the hope that they will come together at the right time, that drives Benjamin forward.

The Curious Case of Benjamin Button was the last of David Fincher’s films I had yet to see. People usually don’t talk so positively about it when it compares to the rest of his filmography, it’s known as one of his ‘weaker’ movies, and it did seem like the only one of his movies that seemed just a little awards baity. I put off my viewing of this partially because I heard some mixed things from other people about it. I was actually surprised by how much I liked the movie, I actually think it’s rather great.

Most of David Fincher’s films are regarded as being rather ‘cold’ (and I can kind of see why), but The Curious Case of Benjamin Button is definitely his most emotional film. It’s pretty much just following this man in his extraordinary (and fictional) life. Some have called it an awards bait movie, and some moments felt like that at certain points. However with the memorably and lively characters, warmth and genuine emotion, I got quite invested in the movie. It’s a long movie at around 2 hours and 45 minutes long. While I did still like the movie throughout, it probably didn’t need to be that long. It does start off a little rocky, quite slow. But as it progresses, it really picks up, and by the time the first act was finished I was into it.

The cast all work together. The titular character of Benjamin Button is played by Brad Pitt, and he’s great here, he believably portrays him in every stage of his life and his development is played very well. He’s the centre of the movie through and through, and Pitt plays him wonderfully. Cate Blanchett is also great as the adult version of Benjamin’s childhood friend, the two of them share some believable on-screen chemistry. The supporting cast with the likes of Tarji P. Henson, Tilda Swinton, and others are also great in their respective roles, and do their parts to stand out quite a bit.

David Fincher’s direction is fantastic as usual. Once again it’s a movie that you don’t expect him to really take on, but he goes all in on with this movie, and on a technical level it’s great. It’s a great looking movie, the cinematography from Claudio Miranda is really good. Fincher usually applies CGI to enhance the look of scenes, mainly in the background (and done in such a way that you don’t even notice it). While that’s probably the case here, here he also uses it for the aging effects on Brad Pitt’s Benjamin Button, and over a decade later it still generally holds up. The score by Alexandre Desplat is also quite beautiful and fit the tone of the movie.

David Fincher has made better movies for sure, but The Curious Case of Benjamin Button is not to be overlooked, I’d actually consider it to be great. The cast are top notch, Fincher’s direction is outstanding as to be expected from him, and the story itself is quite emotional and beautiful. It may be one of his ‘weaker’ movies (it’s definitely not among his best), but it’s still worth watching for sure, and nowadays I don’t think people give it enough credit.