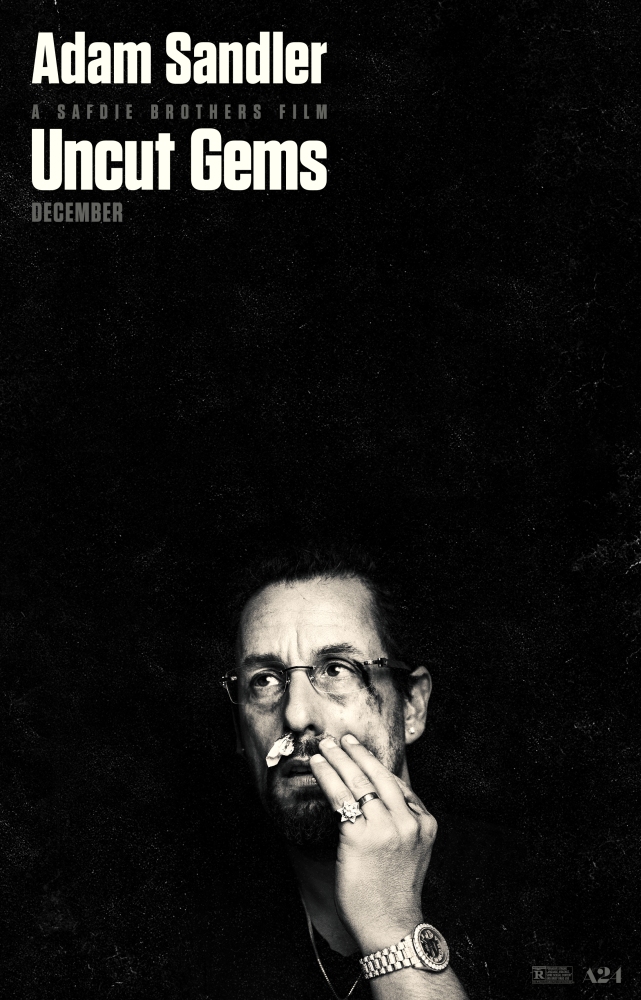 From acclaimed filmmakers Josh and Benny Safdie comes an electrifying crime thriller about Howard Ratner (Adam Sandler), a charismatic New York City jeweler always on the lookout for the next big score. When he makes a series of high-stakes bets that could lead to the windfall of a lifetime, Howard must perform a precarious high-wire act, balancing business, family, and encroaching adversaries on all sides, in his relentless pursuit of the ultimate win.

Uncut Gems was one of my most anticipated movies of 2019. The Safdie Brothers impressed me quite a bit with Good Time back in 2017, and so I was interested in seeing what they would do next. Also the fact that Adam Sandler was cast in the lead role interested me, because I just knew that he was going to return to being dramatic Sandler even for just one movie, and basing off of Punch Drunk Love, I knew that he would be great. Uncut Gems on the whole was great, and one of the highlights of the year. 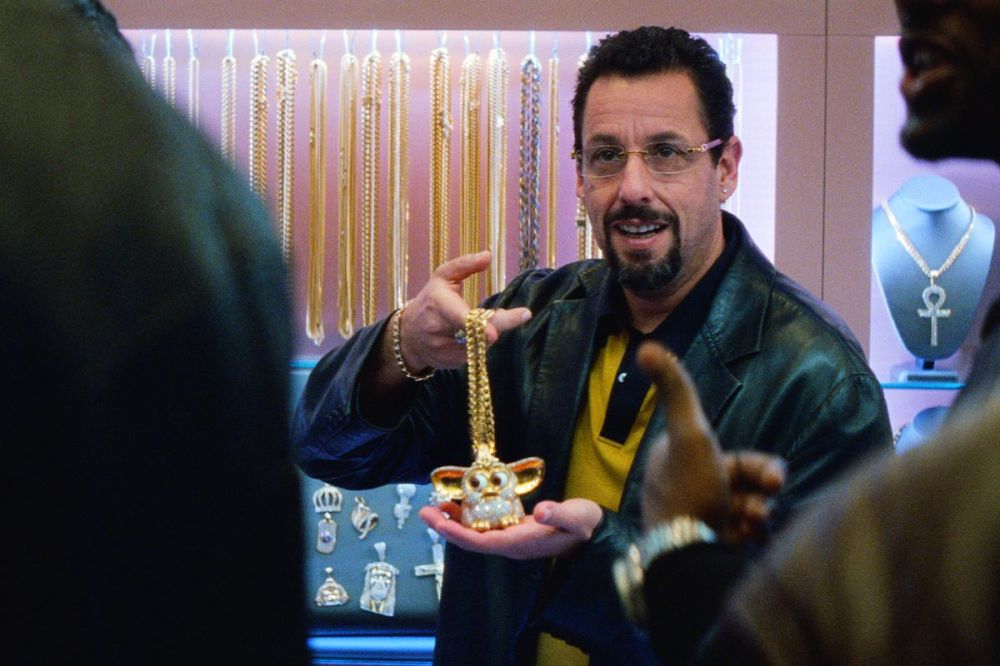 Uncut Gems is another thriller from the Safdies, this time it’s a different kind of thriller. There’s a bunch of things going on at once, with lead character Howard Ratner constantly placing bets while being heavily in debt. Although there are moments to breathe (with a movie a 2 hours and 15 minutes long you’d expect that to be the case), you are constantly aware of the danger that is present, and the stakes are high for our main character. Every time things go right for Howard, he does something to put himself into dangerous situations again, usually by placing another bet. The tension just keeps being raised and raised even further. It’s full of energy constantly from start to finish, and the characters are very well realised. The second act does slow down the pace quite a bit for some reason, and while it was fine, it was rather out of place. The third act was particularly great, very suspenseful and effective, concluded by a fitting ending. 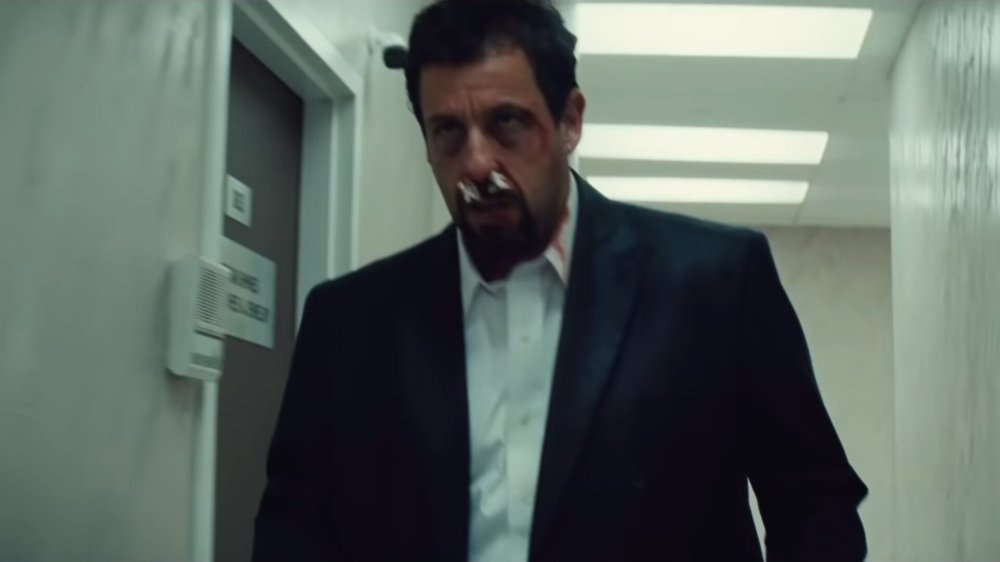 Much of the talk is about how great Adam Sandler is, and the talk is well deserved. I’d go so far as to say that this is his best performance, and having seen Punch Drunk Love, that’s saying a lot. While you can definitely tell it’s Sandler all the way through, he performs his character of Howard Ratner perfectly, I can’t see anyone else in this role. Howard is not a good person, he’s not very likable, and he could’ve easily been obnoxious to watch on screen. Sandler however manages to get you to tolerate him and even root for him, even when he often keeps digging himself into a deeper grave. He has this immense energy in him that works perfectly for the character. The movie is already great, but even if it wasn’t, it would be worth watching for his performance alone. That’s not all though, the supporting cast does well too, including Idina Menzel as Howard’s wife, and Lakeith Stanfield who is good as always. Former professional basketball plater Kevin Garnett actually plays himself as part of the plot, and he’s actually a really good actor, he’s great here. Eric Bogosian does some effective work as a loanshark that Howard is in debt to. A standout among the supporting cast (and that’s saying a lot) however is Julia Fox as Howard’s girlfriend. I think this is Fox’s first movie, and he leaves quite a strong impression in this movie, and I hope she gets a lot more roles from her work here. 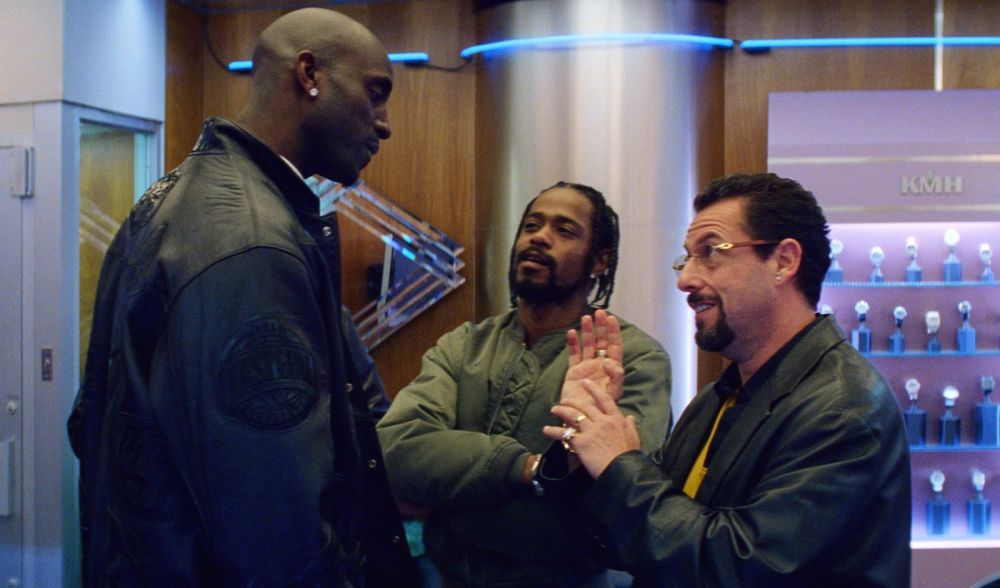 The Safdie Brothers has once again directed this incredibly. I’m not sure how it’s possible for them to top Good Time on a directing level at least, but they’ve done it here. It’s well shot and edited from start to finish, one of the highlight scenes took place at a nightclub. The tense scenes are made even more tense by how it is directed. If possible, see this in a cinema, though I’m aware that due to some weak distribution that’s not always possible (certainly wasn’t the case for me). The music by Daniel Lopatin worked quite well, fitting the fast paced nature of the rest of the movie.

Uncut Gems is great, and one of the highlights of the year. It’s written and directed incredibly well by the Safdie Brothers, and the cast is great, especially with a career best performance from Adam Sandler. It’s a movie I’d like to revisit for sure.

After a botched bank robbery lands his younger brother in prison, Constantine “Connie” Nikas (Robert Pattinson) embarks on a twisted odyssey through the city’s underworld in an increasingly desperate—and dangerous—attempt to get his brother Nick (Benny Safdie) out of jail. Over the course of one adrenalized night, Connie finds himself on a mad descent into violence and mayhem as he races against the clock to save his brother and himself, knowing their lives hang in the balance.

I had been hearing some pretty good things about Good Time for a while, it received a 6 minute standing ovation at the 2017 Cannes Film Festival. Much of the praise was focused towards the direction and Robert Pattinson’s performance. So I was definitely excited for what I was going to watch. I’m happy to say that Good Time definitely lived up to all the hype and praise and deserves a lot more attention than it’s been getting. 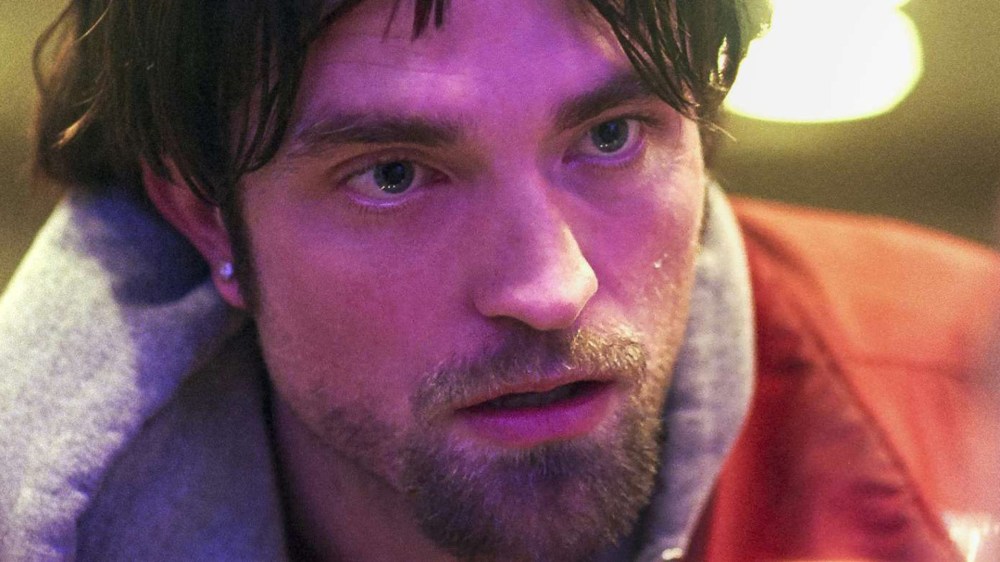 Good Time is a very straightforward movie, Robert Pattinson has to save his brother in one night and from start to finish it delivers. However, the way they did it was so fantastic. First of all, it feels very realistic and gritty, from the story to the dialogue and characters. The movie despite its title isn’t really a “good time” (it is however a good time in the sense that it is a good movie), it is quite dark and there aren’t many bright spots, even the main character isn’t really likable at all and does some very questionable things. I have to give the Safdie Brothers credit for sticking with this approach because it made the movie better. This movie is 1 hour 40 minutes long and honestly that was the perfect length, the film takes place just over a night and it really benefited from that. The film keeps you riveted from start to finish and there is a constant sense of urgency and tension. I won’t say much about the plot, honestly it’s better going in not knowing a lot about the plot.

Just like Kristen Stewart, Robert Pattinson has shown how great of an actor he is post Twilight and should be taken seriously. Putting the general perception of him aside, Pattinson is fantastic here. His character doesn’t have many redeeming qualities, he is very manipulative towards pretty much everyone he encounters and goes to some low levels throughout the movie. The only thing keeping us kind of rooting for him is his connection with his brother. Robert Pattinson is absolutely transformative, not once do you think that this is the guy from Twilight, you just see the character, which is one of the highest compliments that one can give to a performance. Pattinson deserves a lot of praise for his performance here and I hope we get to see more of his talents in future films. Ben Safdie (who’s also one of the directors of the film) plays Pattinson’s mentally challenged brother and although he doesn’t have a massive amount of screentime he was great. Other supporting actor performances from actors like Jennifer Jason Leigh and Barkhad Abdi are good for the short screentime that they have and they all contribute and add to the movie. However aside from all that, it is really Robert Pattinson who gets to shine the most. 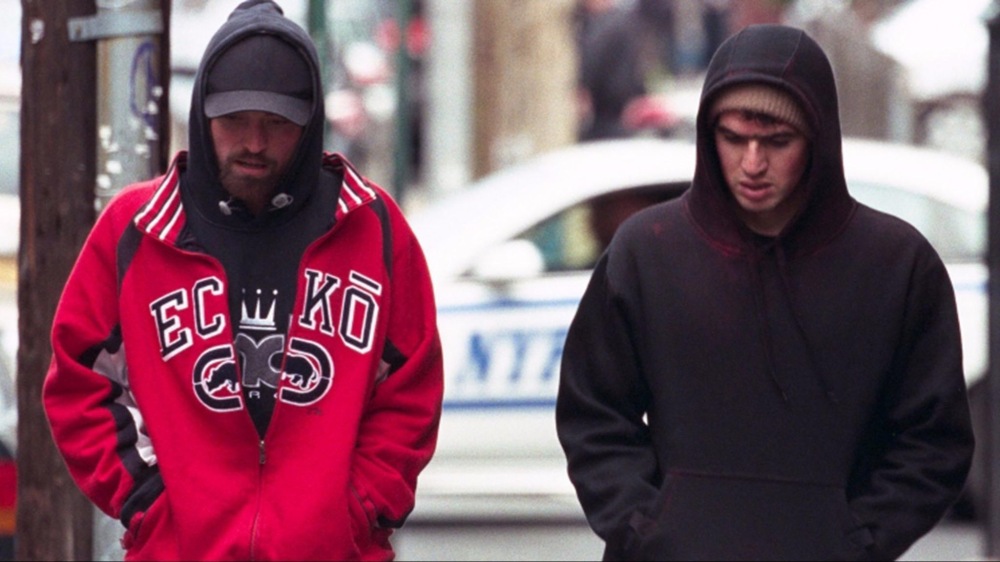 This is the fourth film that The Safdie Brothers directed together and the first film I’ve seen of theirs and I can say that they are definitely very talented after seeing Good Time. The night-time scenes in particular are so well filmed, a stand out aspect being the use of colour, they were so well utilised. There is particularly also a sequence which takes place in an amusement park which was directed very well. The film has a constant sense of urgency and the way it was directed and edited really added to that. Throughout the movie there is a lot of close up shots of people’s faces (maybe a little too much) which I guess is done to make things feel claustrophobic, it may be annoying for some people but I was fine with it. The music was also excellent, the use of synth really did add to the film and is used so well, often adding to the sense of urgency.

Good Time was one of the most pleasant surprises of 2017. It has a very gritty, realistic and dark story, great direction from the Safdie Brothers and featured an excellent lead performance by Robert Pattinson, which is one of the best performances of the year (and unfortunately didn’t get enough praise). I can’t wait to see more films from the Safdie Brothers, they’ve definitely shown that their talents with this movie. I also feel like it could possibly benefit from rewatches and I can’t wait to revisit it. Good Time is definitely worth a watch and more praise, at least more praise than its been getting.