A diverse team of scientists, soldiers and adventurers unites to explore a mythical, uncharted island in the Pacific, as dangerous as it is beautiful. Cut off from everything they know, the team ventures into the domain of the mighty Kong, igniting the ultimate battle between man and nature. As their mission of discovery becomes one of survival, they must fight to escape a primal Eden in which humanity does not belong.

Kong: Skull Island was one of my most anticipated films of 2017. This film is also set in the same universe as Godzilla (a film that I liked) as the MonsterVerse is being created. Plus the cast and the trailers looked good, so I was definitely interested in checking it out. Although there are plenty of problems with this movie, Kong Skull Island is still a fun and solid movie, mostly due to the fantastic direction.

The story isn’t particularly special, above average, it’s serviceable for a Kong movie. The dialogue at times was hit or miss, some of it worked, some of it was cheesy and occasionally bad. Most of the comedy didn’t work, it only worked when it was delivered by John C. Reilly. One thing I will say though is that this movie definitely knows what it is. It knows its an over the top action movie and it delivers in that regard. Kong doesn’t show up a huge amount (like with Godzilla in his most recent film) but it doesn’t cut away from Kong just as he is about to do something awesome. He is in the movie in small enjoyable doses and was used very effectively, he was awesome when he was on screen. As for the last act… so fantastic.

Now this film has a lot of talented actors, including Tom Hiddleston, Brie Larson, Samuel L. Jackson, John Goodman, and Toby Kebbell. Unfortunately the film kind of wastes them and they don’t get to do as much as you think they would. However, these actors do try as best as they can, they still were good enough, they just should’ve been given more to work with. The actor who steals the show is John C. Reilly. He is entertaining, and also the only source of comedy which actually works. 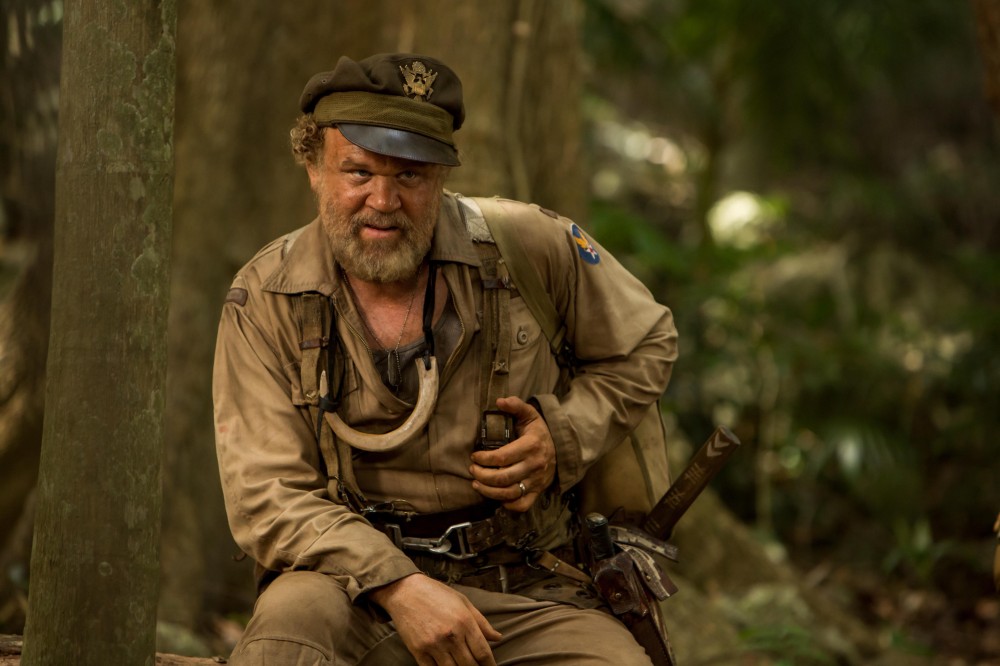 What makes this film work effectively despite its flaws is the direction. This film is directed by Jordan Vogt-Roberts. This is his first ‘big’ film and I can say that he is a talented filmmaker, and I can’t wait to see more movies from him. The direction of this film is so great, on a technical level, everything is excellent. Something that was perfect was the cinematography, done by Larry Fong (Batman v Superman, Watchmen, 300). The film looks absolutely beautiful, not one shot felt out of place. The action is intense, the special effects looked great, there wasn’t a fake looking creature or effect. The film also does a good job at making it feel like its set in the 70s. The soundtrack by Henry Jackman also made things a lot more epic. The only criticism I have direction wise is some of the music choices and style felt out of place but that is it.

Kong: Skull Island definitely has some flaws with regards to its plot, characters and dialogue, but the overall direction boosts the film immensely, and almost makes me completely forget about all the problems. Overall I liked this movie about the same level as Godzilla, this film does some things better and some things worse. While the movie wasn’t as great as I hoped it would be, it was still quite a fun time. Also, make sure you stay after the credits, because there’s a post credits scene, and it’s well worth waiting to see it.