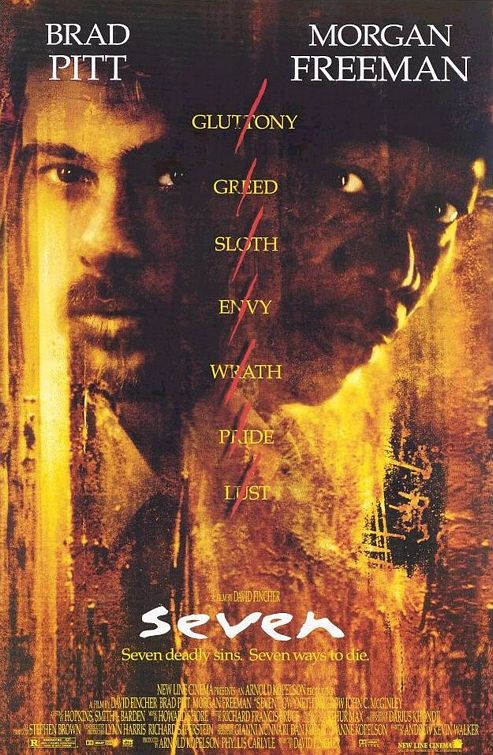 Two homicide detectives are tracking down a sadistic serial killer who chooses his victims according to the seven deadly sins. Detective David Mills (Brad Pitt) is a hopeful but naive rookie who finds himself partnered with veteran Detective William Somerset (Morgan Freeman). Together they trace the killers every step, witnessing the aftermath of his horrific crimes one by one as the victims pile up in rapid succession, all the while moving closer to a gruesome fate neither of them could have predicted.

David Fincher is an outstanding filmmaker and really establishes it here after the Alien 3 debacle. He isn’t a stranger to dark movies and none of his others are as dark as this one. Its dark feel captivates and holds the attention of the audience. From start to finish, Se7en is a brilliant, thrilling, horrifying, fascinating and well made movie that contains of the best aspects that Fincher has as a filmmaker.

The tone of this movie seems to always be dark and that tone is established with its opening credit sequence. The film is captivating from start to finish as we see these two detectives try to solve the murders. The murders that they investigate happen before they appear at the crime scene, so you don’t see the murder in process. Fincher also doesn’t show the murder scenes gratuitously, just as much necessary for the audience to see; we also learn more about how the victims died through discussions afterwards and the rest of it is left to the audience’s imagination. Nonetheless, some of the deaths are particularly gruesome, meaning that this movie is probably not for everyone, particularly the faint of heart. Se7en also has one of the best endings however without spoiling it; it’s not pleasant at all. It is haunting, depressing and a bit disturbing however I think that the ending was perfect for this movie.

The acting by Morgan Freeman and Brad Pitt were very good. The idea of a retiring detective being paired with a rookie cop at first sounds like some buddy cop movies, but it is handled very well as both Freeman and Pitt play their roles with realism. Most of the best scenes in the movie is when it’s just them talking; investigating all those murders gets them talking about things that are just very interesting to watch. The rest of the cast are also really good like Gwyneth Paltrow who makes quite an impact, despite not having as much screen time. I won’t reveal who the killer is played by, but the actor did such a good job playing him and was on the level of Morgan Freeman and Brad Pitt as the best performances in the whole movie. Simply put, the killer embodies evil in all its forms, and it is rare to find many performances that does this successfully.

The film has a bleak dark feeling, which would be later used in a lot of other David Fincher movies. I’ve also noticed that the sun never shines during the movie, it rains a lot and it was often gloomy, which really added to the dark tone. Everything from the lighting, editing and cinematography is so well used to its fullest potential. The soundtrack by Howard Shore is also quite good, adding to the atmosphere.

David Fincher has successfully created a dark, disturbing film with a lot of atmosphere. Although the deaths didn’t really disturb me, I will say that this film is not for the faint of heart. It is one of Fincher’s best and as long as you know what you are going into before you watch it, it is a brilliant movie.