Stuart Shepard (Colin Farrell), a publicist, finds his life under threat when he answers a ringing phone a phone booth. The caller (Kiefer Sutherland) tells him that he will be shot the minute he cuts the call.

I heard about Phone Booth for a while, I knew that it was a thriller directed by Joel Schumacher and was about Colin Farrell stuck in a phone booth and terrorised by a shooter on the other end of the call. I had already heard that it was pretty good, but it actually turned out to be much better than I thought it would be, and was engaging all the way to the very end.

Phone Booth is a pretty short movie at an hour and 20 minutes long, and that was the right length for this plot. It makes the most of that runtime, quickly setting up the main character, as well as the situation that he finds himself in for the rest of the movie. From the point that he gets the call from Kiefer Sutherland’s character, you are locked into the plot and the tensions only raise as it progresses. It’s all paced rather well too, never allowing for a dull moment. While I wouldn’t say that it’s nothing that any other movie has done before, it’s nonetheless a very good movie and absolutely succeeded at what it set out to do. Looking at it on the whole, it’s a very good script from Larry Cohen, and the dialogue is great, especially between Colin Farrell and Kiefer Sutherland. I wouldn’t say that Phone Booth is a great movie, but the only significant criticism I have of it is something that happens at the end. While I’m fine with the ending, there was something implausible that happens towards its conclusion I couldn’t really buy, and up to that point I was on board with the rest of what happened. It’s a small gripe but it really does stick out.

The performances are also very strong. Colin Farrell is the protagonist stuck in the phone booth, and he does very well on his part. His character goes through a lot emotionally during the film and Farrell really sells it incredibly well, especially in the last act. He’s front and center for the whole movie and carries much of it, however he’s not the only one who gives a great performance. Kiefer Sutherland is the voice of the caller, and while this movie is pretty good, in all honesty I’m not sure that this movie would work quite as well without him. Sutherland is truly menacing and deliciously evil in his part, his voicework really made this movie work even better. Other supporting actors work well enough, including Forest Whitaker who is decent as the police captain who is trying to handle the tense situation.

Joel Schumacher directed this movie very well, raising the tensions effectively, especially with the editing and cuts to windows and vantage points. He also helps make it feel claustrophobic, with it primarily taking place at one closed off location at the phone booth. You can tell that it’s a movie with a lower budget but it was put to some good use here. The only part of the direction I didn’t really like was the editing which feels very early 2000s to say the least, at some points there are some split screens and really I think they could’ve done without those.

Phone Booth is an engaging, claustrophobic and tense thriller, directed very well and featuring two great performances in Colin Farrell and Kiefer Sutherland. I’d say that it’s among Joel Schumacher’s best movies for sure. If you want a brief yet very effective thriller, I highly recommend this movie, it’s rather overlooked. 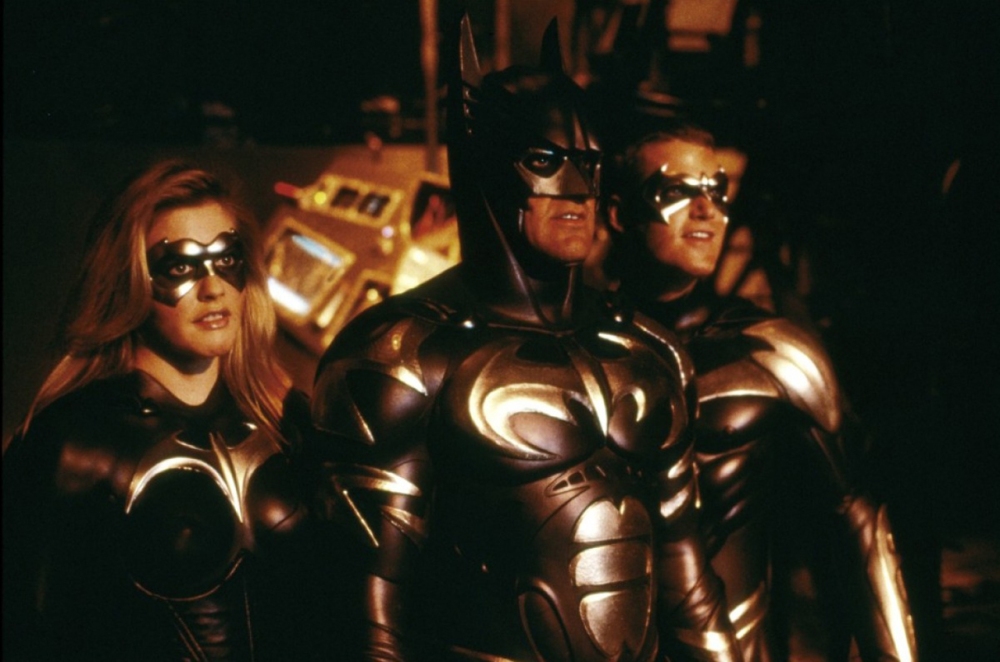 This superhero film finds Batman (George Clooney) and his partner, Robin (Chris O’Donnell), attempting to the foil the schemes of a deranged set of new villains, most notably the melancholy Mr. Freeze (Arnold Schwarzenegger), who wants to make Gotham into an arctic region, and the sultry Poison Ivy (Uma Thurman), a plant-loving femme fatale. As the Dynamic Duo contends with these bad guys, a third hero, Batgirl (Alicia Silverstone), joins the ranks of the city’s crime-fighters.

Despite mixed reviews of Batman Forever, it did well enough and so Joel Schumacher returned for the sequel. Batman and Robin killed the Batman franchise for about a decade before being picked up again by Christopher Nolan. Even though Batman and Robin is one of the worst superhero movies ever made, out of all the bad superhero movies this is actually kind of enjoyable. It is absolutely a movie that’s so bad it’s entertaining.

If Batman Forever was cheesy, Batman and Robin takes it to a whole new level. The tone is completely corny and it tries being a really bad cartoon, there’s even a scene where Batman has a bat credit card. This film is extremely over the top, a great example is Batman’s introduction. The dialogue was terrible, for example there are so many puns, most of them ice puns from Mr Freeze. It’s actually hard to summarise everything wrong with the movie, all of that can only be seen if you watch the whole movie. 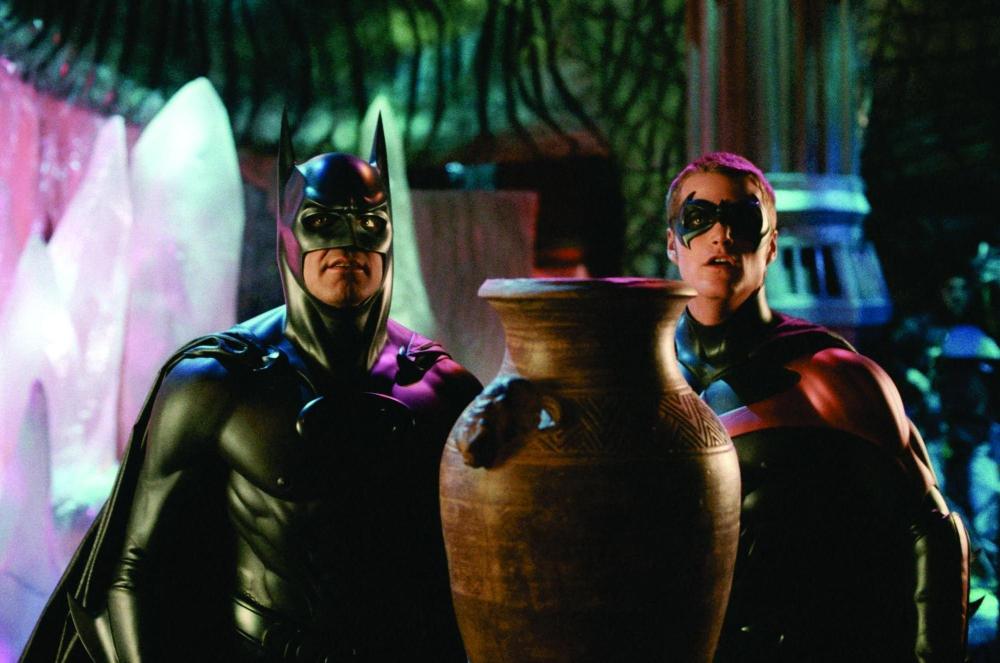 George Clooney had the potential to be a great Batman but due to bad direction and writing he wasn’t good at all. The worst part about him is that his Bruce Wayne and Batman identities feel exactly the same with no distinction between the two. The best performance had to be by Michael Gough, who plays Alfred. Throughout all of these four Batman movies he’s been credible, even the Schumacher movies. Arnold Schwarzenegger is Mr Freeze and I have no idea why he was chosen. I have a feeling that it was because he was a big name because he does nothing but deliver bad puns. The most over the top performance was Uma Thurman as Poison Ivy. Uma Thurman is actually a good choice for Poison Ivy but just look at her performance. She acts like a pornstar obsessed with plants, and it’s honestly one of the most cartoonish performances I’ve seen in a movie.

A good example of how over the top the action is, is shown in the first minutes: Batman and Robin are skating over ice and are using hockey sticks to get a diamond. The production design is also terrible, there’s a moment when a frozen car door opens and the ice on it wobbles. There’s also some obvious and over the top wire work, at time it felt like a puppet show. The costumes are worse, not just the Batman and Robin nipple suits. Mr Freeze’s suit is a giant neon lit ‘costume’ that just looks plain ridiculous. Fun fact, this movie was made to sell toys and you can see that everywhere. There’s even a scene where Batman, Robin and Batgirl change outfits between scenes without going to the Batcave to change.

Batman and Robin is a bad movie and is the worst Batman movie. It’s cheesy, over the top, doesn’t make sense, isn’t Batman and it should be watched. I’m not kidding, it’s actually worth watching, more than Batman Forever even though that movie is a better movie. This movie is such a disaster, gets everything wrong and decades later it’s become this fascinating movie that could honestly be watched over and over again. Just know that the movie is absolutely terrible before watching it. 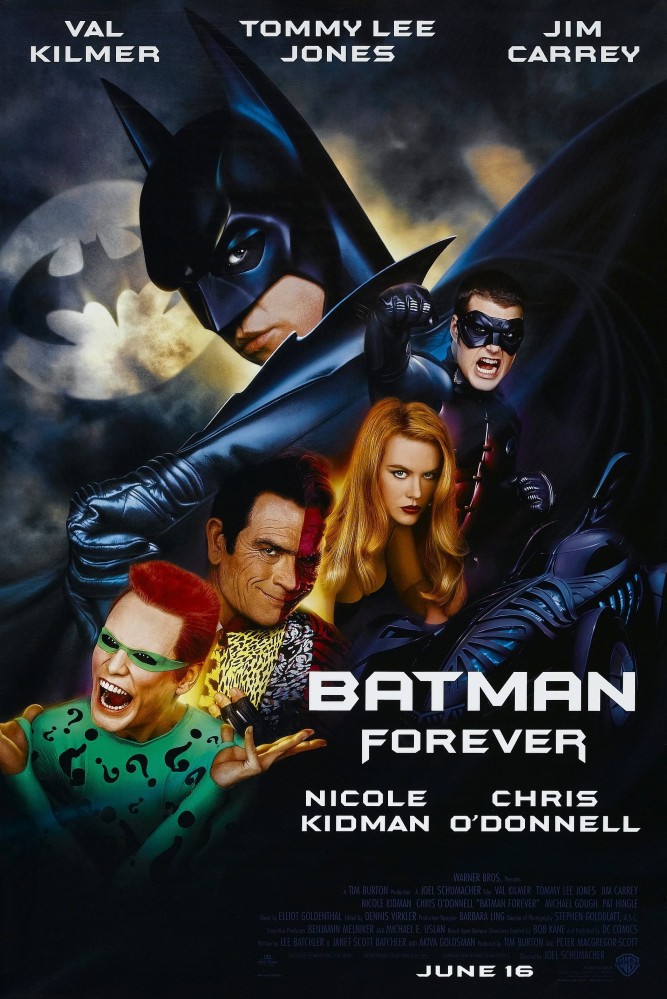 Batman (Val Kilmer) is back. This time he faces several challenges. Harvey Dent (Tommy Lee Jones) who had acid thrown on his face, Edward Nygma (Jim Carrey) who has invented a device that manipulates human brainwaves and transfers them into his own head, Dr. Chase Maridian (Nicole Kidman), who has a major crush on him and Dick Grayson (Chris O’Dowd), who lost his family at the hands of Two-Face and is taken in by Wayne. Batman now must train Dick Grayson and confront both Two-Face and The Riddler to save Gotham City.

Batman Returns wasn’t loved by everyone, mostly due to its even darker tone, as a result, Warner Bros decided to replace Tim Burton with Joel Schumacher in order to have a lighter tone, and they certainly got what they wanted. Batman Forever however isn’t a good film, it’s not without its entertaining moments but it’s not a good movie overall and its style just doesn’t fit Batman.

As I said previously, the tone in this movie is much more light-hearted than Burton’s films. First of all there are some pretty cheesy lines in this movie (“Chicks dig the car”). I’ll admit that some of them are enjoyable in a guilty pleasure sort of way but a lot of the time it can get ridiculous. There are also some over the top stuff, for example in order to stop Batman and Robin from coming to their hideout, Two Face and The Riddler play a game of Battleship. I didn’t really buy Edward Nygma’s transformation into The Riddler, as he seems to become The Riddler in his first scene, which doesn’t lead to him being developed at all. I will say that the film surprisingly handled Robin’s story okay, it wasn’t great but it worked for the movie. Overall if you are planning to watch this movie, don’t go in for the story, it’s not a very good one and you can have more fun with how stupid it is.

Val Kilmer makes for a decent Bruce Wayne, I could buy him as this character but he was a pretty forgettable but okay Batman. Chris O’Donnell was okay, as Robin but he wasn’t very memorable. I really don’t understand why Nicole Kidman was in this movie and something about her performance actually annoyed me a little. Maybe it’s because the ‘romance’ between her and Batman is not plausible in the slightest. The villains are very over the top that’s the problem with Schumacher’s Batman villains. They are all crazy and nothing else. Jim Carrey is playing Jim Carrey in this movie but I can at least give him credit that The Riddler is meant to be kind of nuts, even if this isn’t a good portrayal. The same can’t be said for Tommy Lee Jones, who is so incredibly over the top as Two Face, I’m convinced that he thinks he’s playing the Joker with half his face burnt.

As the tone changed with Schumacher’s direction, so did the style, you can see if everywhere from the countless neon lights in this movie to the annoying amounts of Dutch angle shots. The costumes are pretty bad too, and I’m not just talking about the Batman nipples, for example The Riddler looks like he’s wearing Riddler pyjamas, something that a Riddler fan would wear, not the Riddler himself. I guess the only suit that looks okay is the Robin suit, probably because they actually made it look not laughable. The soundtrack is nice but it’s not really the most suitable soundtrack for Batman.

Batman Forever isn’t the worst batman movie but it’s not a good one either. The villain performances were over the top and the style wasn’t really the best for Batman. But still there are some enjoyable scenes, and a lot of the movie can be considered guilty pleasure material. It is by no means however a good movie, it was still better than Batman and Robin though.