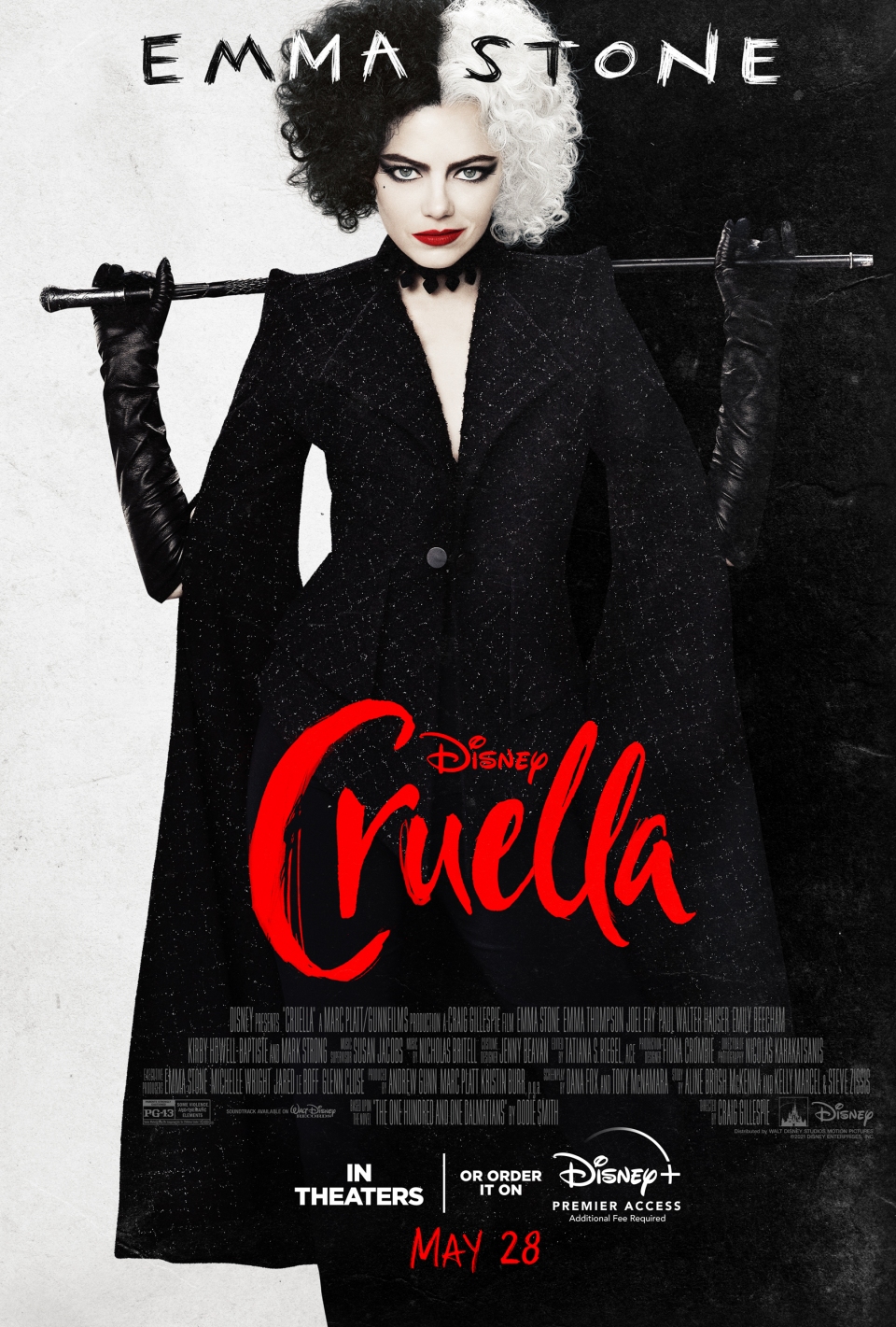 Estella (Emma Stone) is a young and clever grifter who’s determined to make a name for herself in the fashion world. She soon meets a pair of thieves (Joel Fry, Paul Walter Hauser) who appreciate her appetite for mischief, and together they build a life for themselves on the streets of London. However, when Estella befriends fashion legend Baroness von Hellman (Emma Thompson), she embraces her wicked side to become the raucous and revenge-bent Cruella.

Cruella was a movie I wasn’t entirely excited for in the lead up to its release. While I haven’t seen all the live action Disney remakes, generally they’ve felt rather average and not that impressive. However there were a few reasons I was slightly interested for Cruella. One was the cast, which included Emma Stone and Emma Thompson. There is also the fact that it’s an origin story for Cruella de Vil, which although potentially unnecessary, does mean that it’s probably going to do more than just be a repeat of the animated movie’s story beats. Also the trailers looked decent, and hinted at being more than just a replication of the animated movie. Cruella actually surprised me quite a bit and I liked it.

Cruella was 2 hours and 14 minutes long, despite the fact that the movie is very fast paced, and I was entertained throughout. The plot is rather predictable and familiar (not necessarily in terms of it being a Disney movie), but nonetheless I was interested to see where it would go. Throughout when you’re watching the movie, you might be wondering how this version of Cruella de Vil is supposed to link up with the versions of Cruella de Vil that we are more familiar with. I get the feeling however that this is actually a reimagining of the character, and if that’s the case then I’m entirely on board with that. Even by the end, she’s more of an anti-hero than a full on villain. One way where the two versions of Cruella differ is with regard to the dogs, you don’t need to worry about seeing any puppy/dog killing because there’s none here. There’s even two dogs who are with Estalla/Cruella and the thieves she’s teamed up with, so it is definitely taking a different approach to the character. It is an origin story for Cruella de Vil, and while it does seem a bit unnecessary to bolt a tragic backstory and try to force it in, I was surprisingly rather engaged. One of the things that emerged online about the movie as soon as it came out was a particular moment involving dalmatians in the first 20 minutes, and yes it is rather ridiculous and forced. However it actually works alright in the movie itself, partly because of the tone. Throughout. it does have a rather campy tone, so some of the sillier aspects and issues seem to work alright here, including a flawed story and cheesy dialogue. I’m not certain that I’ve watched the original 101 Dalmatians movie but there were some moments that referred to that film, and they were quite on the nose. It was almost like the filmmakers were contractually obliged to include them. However there weren’t as many of those moments as I thought they would be, nor did they take away from the rest of the story. I feel like by it being an origin story, it actually had freedom to be its own movie (a crime comedy) rather than being restricted to just repeating story beats from a pre-existing film. For those interested, there’s a mid credits scene which hints towards a sequel.

The cast were among the strongest parts of the movie. First of all is Emma Stone as Estella/Cruella de Vil, who turned out to be a surprisingly great casting choice. Stone humanises her and adds so much to the character, while giving a larger than life performance and is clearly having a great time in the role. Even if you don’t like the rest of the movie, I do think Cruella is worth watching for her alone. There’s also Emma Thompson as The Baroness, and her character does seem very similar to Meryl Streep as Miranda Priestly from The Devil Wears Prada. However it actually sort of works for this movie, and Thompson is great as the film’s scene chewing and hateable villain. The back and forth between her and Stone is very enjoyable to watch. Also really good are Joel Fry and Paul Walter Hauser as the thieves that are teamed up with Estella/Cruella, and the three play off each other very well. Hauser particularly stands out, especially with his perfect line delivery and comedic timing.

Cruella also benefits a lot from the energised direction of Craig Gillespie. Performances aside, the stylistic direction elevates the script immensely. The setting of 70s London is beautifully filmed with gorgeous cinematography and has well detailed set designs, it lends itself well to the fashion, music and grimy aesthetic. The wardrobe is fantastic as to be expected, the costumes are absolutely extravagant, and the visual style really showed them off well. The score from Nicholas Britell (who also composed Succession, Vice, Moonlight, If Beale Street Could Talk, The King and more) is amazing as to be expected from him, and really adds a lot to the film. The soundtrack has a great lineup of songs, even if many of them feel very on the nose and there are too many needle drop moments. On a technical level, really the only aspect that isn’t so great is the CGI, especially the effects used for the dogs.

One could argue that Cruella is an unnecessary movie, and in a way it is. However I can’t deny that I was enjoying it throughout. The plot is not the best but did enough to have me actually interested to see how things would progress, it’s directed with a very distinct style, and the performances were all great, especially Emma Stone as the titular character. There’s a sequel in talks, and while I’m not sure how it would be possible, I’m not against it. Even if you aren’t such a big fan of the recent live action Disney remakes, I think Cruella is worth checking out.