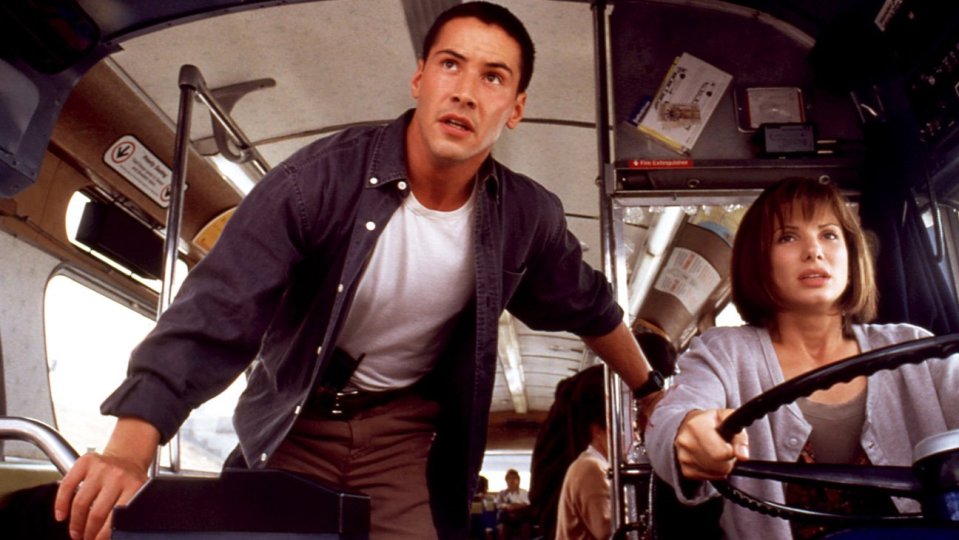 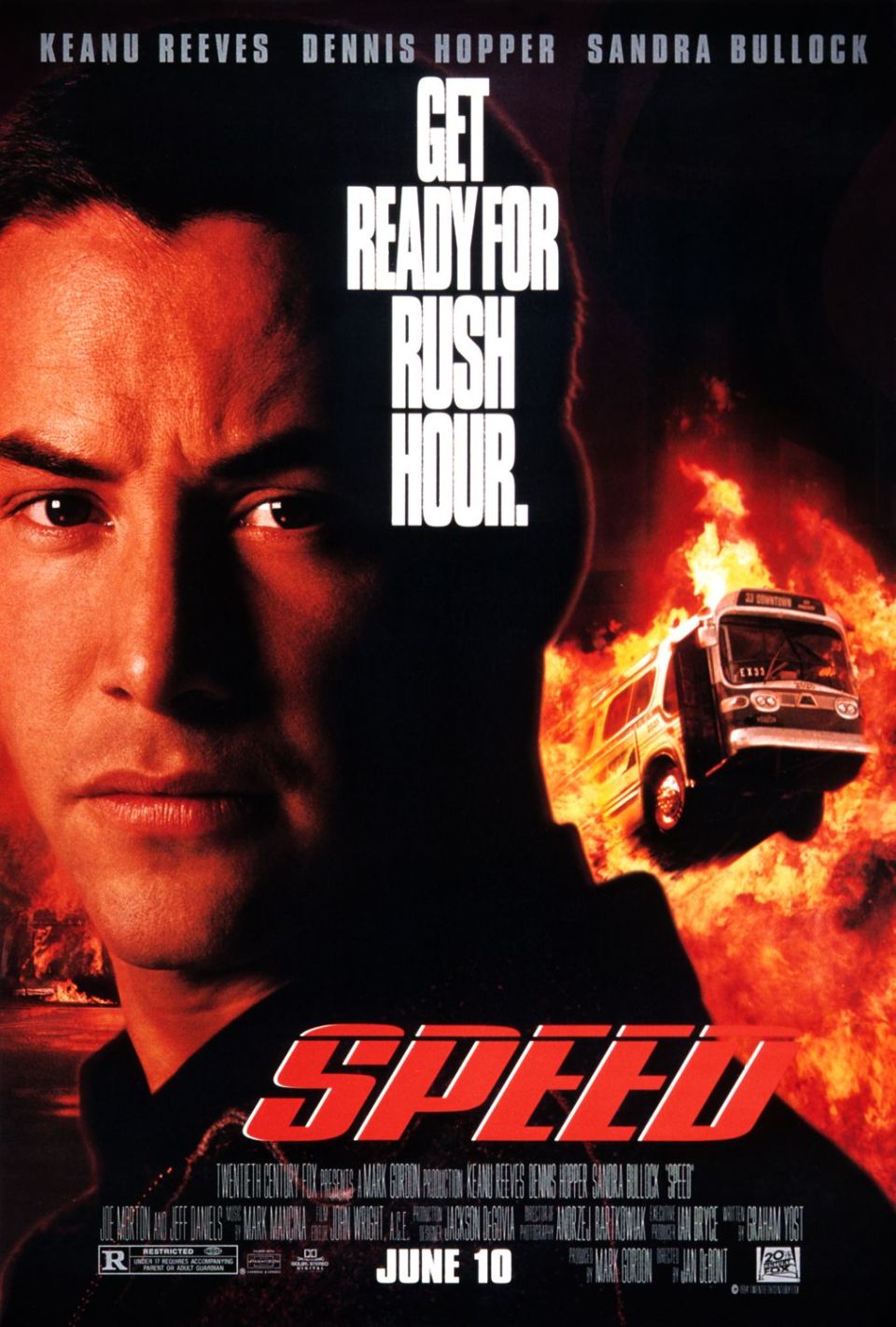 A young police officer (Keanu Reeves) must prevent a bomb exploding aboard a city bus by keeping its speed above 50 mph.

Speed is one of the most iconic and influential action movies from the 90s, with a memorable premise, great action sequences, and it was overall really good. I decided to rewatch it recently, it’s still really entertaining and it surprisingly holds up pretty well for the most part.

The concept of the movie is fairly simple: if a bus drops its speed below 50 mph, it will explode. It works greatly in its simplicity and it’s brilliantly executed. The plot has plenty of creative ideas and situations that prevent the film from being repetitive. It might be a pretty standard plot nowadays in terms of action movies, but the high concept within Speed is sort of action movie genius, especially for the 90s. It’s engaging from its opening moments taking place in an elevator shaft, and remains tense throughout its runtime. The pacing is fierce, aside from its final 15 minutes, it’s perfectly paced. It is breathlessly energetic and intense, and there’s a lot of escalating suspense throughout, never letting you stop for a moment to catch your breath. It drags the audience from one disaster to the next, engaged in such a confined environment. The last act isn’t quite as strong as the first two acts, but it was entertaining enough. It’s definitely a 90s action flick, and with that comes all the typical cheese that similar movies have. This isn’t exactly an intellectually challenging feature, but it was never expected to be that. It fully commits to its ridiculous premise and that’s what makes it both charming and exciting. The dialogue is goofy but quotable nonetheless, and the characters are very cliché but still work well for this movie. Sometimes things happen that don’t make sense as to be expected. Physics and realism aside, the motivations of the villain are kind of shoddy and aren’t really that fleshed out for example. However it’s entertaining enough that it makes up for any problems you might have with the plot. It’s also a very rewatchable movie.

Everyone gives the exact kind of performance you expect from them. The characters are all stereotypes but it doesn’t matter that much, and the actors are all good in their parts. The role of lead character Jack is right for Keanu Reeves, cocky and impulsive, but smart and engaging. Sandra Bullock also does very well here in her part, she and Reeves have some great on screen chemistry in this movie. Dennis Hopper plays the villain, while the character himself isn’t that great, Hopper is effectively chewing every scene he’s in. He makes the character feel crazy yet threatening and in control with all these bombs scenarios he set up. 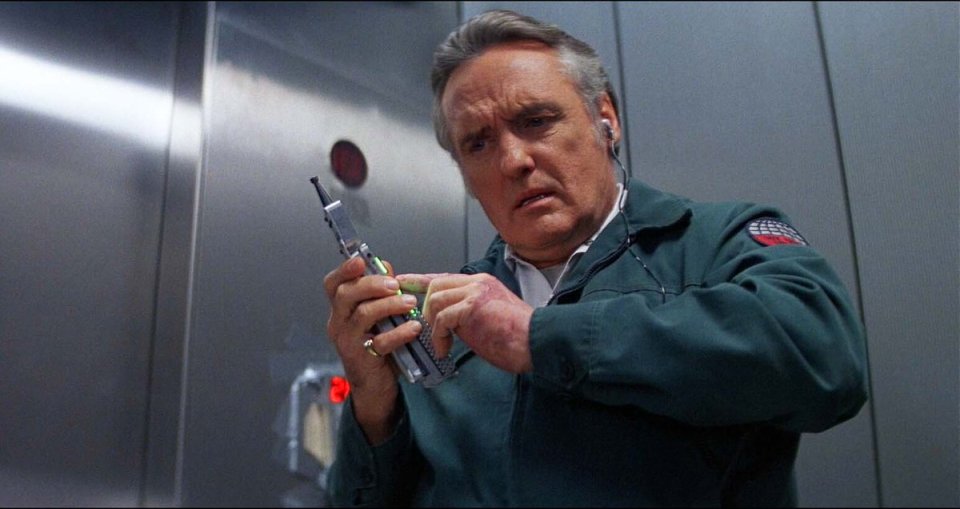 Jan de Bont directs this movie incredibly well. There are so many memorable action sequences, de Bont knows how to keep the tension at a high level throughout. It’s impressive how many different set pieces he’s able to pack into just one location. The opening on its own, the elevator sequence, was a great way of introducing the audience to the kind of tension they’ll be feeling for the rest of the movie. But of course it’s the majority of the movie taking place on the bus that’s so impressive, with some insane practical stunts. The editing is effectively tight, and the intense score from Mark Mancina is memorable and fits the movie well.

Speed is pure high energy action cinema at its finest, and a near pitch perfect 90s summer blockbuster. It’s not only influential and iconic for its time, even today it still entertains and thrills with a simple and over the top yet effective script and plot, likable and memorable characters and acting, and impressive direction. I recommend checking it out if you haven’t already.