Archaeologist professor Indiana Jones (Harrison Ford) is hired to find the Ark of the Covenant when two agents from US Army intelligence tell him of Nazi German activities in archaeology, including a gigantic excavation site in Egypt – a site that an intercepted cable indicates to Indy is the location of the, the powerful chest bearing the Ten Commandments, that the Nazis can use to obliterate any enemy.

Every adventure movie ever made owes it to this movie. With great characters, a sense of adventure, many thrills and well filmed action scenes; it is easy to see it reflected in many adventure movies released after it. It held up 33 years ago and it holds up today, as it continues to entertain today.

This film always has something entertaining going on and always has your curiosity and attention. The reason why it is so loved was because as a film, it gets everything right. For a simple premise, the film takes advantage of it and really makes it as entertaining as possible. The film also has many genres combined into it: action, adventure, romance, comedy, fantasy – and all of these genres are extremely well balanced. There aren’t that many flaws with this movie (despite Indy near the end of the movie knowing what to do despite not learning about it prior to the event), and most of the time you don’t even notice them as you are wrapped up in the adventure.

Indiana Jones is now an iconic character thanks to Harrison Ford’s performance. He doesn’t just rehash his performance from Star Wars as Han Solo; he really brings this character to life. He is like John McClane from Die Hard; he felt relatable and vulnerable like other human beings who seemed like he could die at any moment, where a lot of action characters are always capable. Karen Allen also does a good job at being Marion Ravenwood who is Indy’s love interest throughout the movie. One of the best things about her is that unlike most female characters in action movies (who usually spend most of their time being rescued from danger), she can hold her own and handle herself in any situation All the other side characters that are in this movie are memorable, especially Davies, Elliott and Lacey who are effective as the antagonists in the movie. 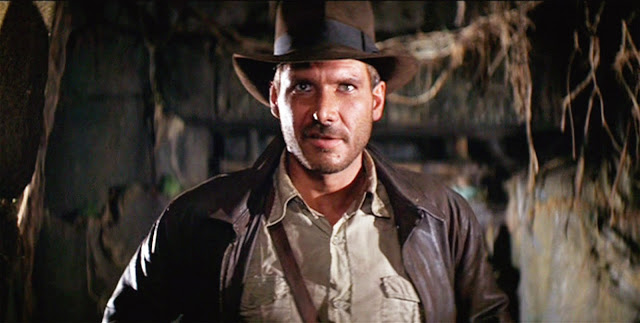 The action scenes in this movie are done incredibly well. The film is also perfectly edited, as is the cinematography shot. I know it goes without saying but the stunt work is incredible; there are a lot of them, unlike most movies of today which often use CGI for the big action scenes. That chase scene in the last act with the horses stands out most to me whenever I think about this movie; it so well shot and overall is the best car chase scene I’ve seen in a movie. The set pieces for each location are designed very well. Also the film uses a lot of practical effects that actually feel real, a perfect example is the boulder near the beginning of the movie. John William’s score is a triumph all the way through; it fits so well with the action scenes, the discovery scenes and many others.

This film is a fun adventure, simple as that. It takes you on a ride. The film balances the action scenes, dialogue and mystery moments. If for some strange reason you haven’t seen this movie, see it now and see what you have been missing out on for years. Raiders of the Lost Ark are a special movie to action films and to films in general. Steven Spielberg perfectly captured the adventurous spirit with this movie.