A black-market mercenary (Chris Hemsworth) who has nothing to lose is hired to rescue the kidnapped son of an imprisoned international crime lord. But in the murky underworld of weapons dealers and drug traffickers, an already deadly mission approaches the impossible.

Extraction was a movie I heard about for a little bit. I knew it was an action movie from Netflix starring Chris Hemsworth and produced by the Russo Brothers. While I haven’t had a close look at it or seen any of the trailers, it didn’t interest me very much. With the brief glances I had of it, combined with the reactions, it looked like another throwaway Netflix movie that happened to star a big Hollywood actor. Nonetheless I checked it out, just out of curiosity, and it turned out better than I thought it would be, I enjoyed it despite there not really being a lot to it.

Plot is simple enough and nothing you haven’t seen before. The script is written by Joe Russo, and it’s not really all that good. It’s pretty familiar to that of other action thrillers, and is fairly predictable. There isn’t much to the characters, it’s not that sort of movie. Even Chris Hemsworth as the lead is the typical mercenary character seen in action movies, one who starts off only being interested in the job of saving a drug lord’s child for the money, and you can probably predict where how he’ll be by the end of the movie. Some people have called Extraction yet another white saviour flick, and they’re not really wrong, it’s a valid criticism. Extraction is also one of those modern movies that occupies the weird space between thrillers that are dark, gritty and brutal, and those that are absurd and over the top. Extraction is a movie where the lead character called Tyler Rake kills two men in the same scene with a rake. At the same time though, it also exists in a movie which has a scene where a drug lord has a child thrown off a balcony, and tries to make another cut off their own fingers. I’m not really sure that the two approaches mesh all that well. Even the moments when they try to be serious don’t always work, and overall it probably would’ve been better to lean into the more over the top action side.

Chris Hemsworth is very much the lead of this movie, and he is quite good on his part. As previously said, his character is very typical, but Hemsworth added a lot with his performance. He’s also very convincing physically in the action sections. The rest of the cast work well enough too. There is another person that Hemsworth’s character is up against played by Randeep Hooda (who’s also trying to get the kid that Hemsworth is looking to ‘extract’ too), and he does quite a lot in his screentime. Other cast members like Golshifteh Farahani and David Harbour also do well enough in their roles.

This is Sam Hargrave’s first film as a director, previously he was an actor and a stunt coordinator. Extraction is a reasonably good debut for him. Now I honestly didn’t know what to expect with the action going in, this being a Netflix movie and all. However, the action is definitely the movie’s biggest strength. It’s well filmed, the stunt work is great, and you can see everything that’s happening on screen. It’s brutal too, for some it may be too much and indeed some had an issue with it, but I ate that all up. The highlight is a 12 minute sequence which is made to look like its filmed in one tracking shot. Yes you can probably figure that it was done with some trick photography and splicing shots together, but it is nonetheless impressive, and a real thrill to watch. Something that has been pointed out about the movie since Extraction’s release was the yellow filter put over the scenes in Bangladesh. Now the whole movie isn’t like this, but it is annoying, and I don’t know why Extraction or a lot of other movies do this.

Extraction was better than I expected, the acting is good, and action is directed incredibly well and is very entertaining. It is still has an average script and is overall a pretty forgettable action flick that doesn’t do anything that you haven’t seen before. But if you’re up for a violent action movie, check out Extraction at some point. 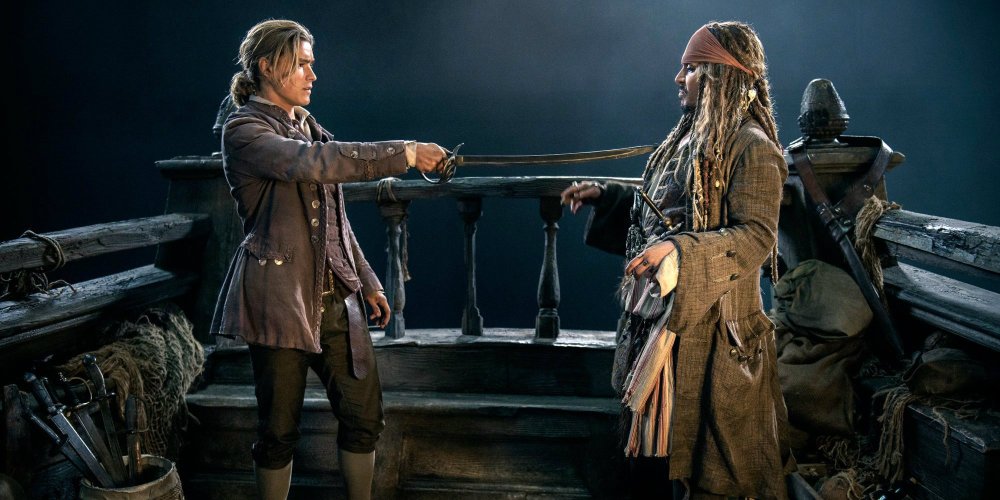 Thrust into an all-new adventure, a down-on-his-luck Capt. Jack Sparrow (Johnny Depp) feels the winds of ill-fortune blowing even more strongly when deadly ghost sailors led by his old nemesis, the evil Capt. Salazar (Javier Bardem), escape from the Devil’s Triangle. Jack’s only hope of survival lies in seeking out the legendary Trident of Poseidon, but to find it, he must forge an uneasy alliance with a brilliant and beautiful astronomer (Kaya Scodelario) and a headstrong young man in the British navy (Brenton Thwaites).

I really didn’t know what to expect going into this movie. I don’t have strong memories of the previous Pirates of the Caribbean movies but I do remember liking the first three and finding the fourth to be mediocre. I wasn’t really looking forward to the fifth instalment, it’s been 6 years since the last film and it seemed tired, forced and it felt like an unnecessary cash grab. Also the marketing wasn’t that spectacular. The only thing that looked somewhat interesting was Javier Bardem as a villain. But out of morbid curiosity I decided to check out the fifth instalment, and to my surprise this movie ended up being better than I expected. I was for the most part entertained throughout, with all the elements of an above average action movie. It’s still got its fair share of flaws however. 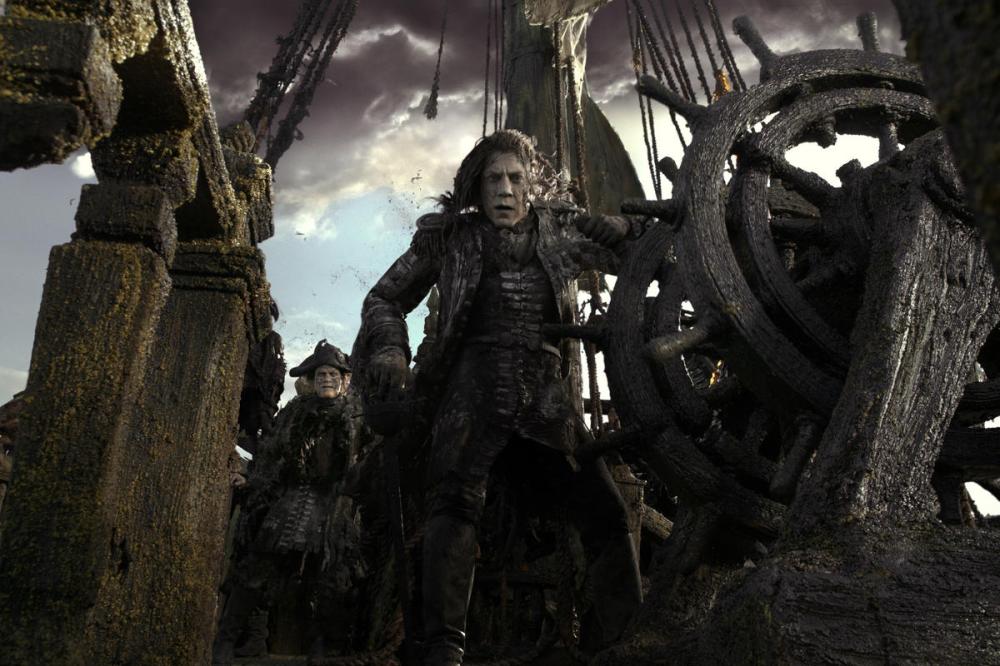 movie felt long, which is odd considering that this movie is around 2 hours 10 minutes long, making it the shortest Pirates of the Caribbean movie to date. After a couple of great opening scenes, the first act is quite slow. The segment where the main three characters (played by Depp, Thwaites and Scodelario) are stuck on land early in the movie really drags. It was also at the first action scene with Jack Sparrow that I noticed an immediate problem (and not just Jack Sparrow/Johnny Depp himself), the comedy was rather weak. In fact all things considering, this might actually be the least funniest Pirates movie, it tries so hard to be funny but it just ends up feeling kind of awkward. However the underlining and the main problem with the movie is that it is a little hard to care about what is going on. The only character I had sort of any interest in was Barbossa (Geoffrey Rush), he was the best character in the entire movie. Salazar (Javier Bardem) was an effective, entertaining and creepy villain but has simplistic and typical motivations, Henry and Carina (Brenton Thwaites and Kaya Scodelario) are okay but their motivations and characteristics are rather bland and uninteresting. And Jack Sparrow is handled the worst out of the main characters, he’s only involved with the story because Salazar is after him and he’s sort of forced into pairing up with Henry and Carina but aside from that, it feels like he doesn’t belong in the movie. Jack doesn’t have any sort of arc or story in this movie, it feels like he was written as a supporting character but put in the role as the main character. So why do I like this movie despite all it’s problems? Maybe its because its been many years since I’ve seen the previous Pirates movies so I just saw this instalment as an simple action adventure movie, the story is minimal and simplistic, same with the character motivations, but it’s enough to keep the movie rolling and it was enough for me to be reasonably entertained by it. This movie does seem to tie up everything with many of the characters in the franchise (no spoilers), almost as if it’s the last film in the series, and while it should’ve been a better conclusion, I’d be fine if this really is the last Pirates movie. With that said, it does have an questionable end credits scene…

I have mixed feelings on Johnny Depp as Jack Sparrow in this movie, this is the worst I’ve ever seen Jack Sparrow in a Pirates movie. In the first act he was just completely drunk, completely unfunny and unlikable and that’s it. In fact I wouldn’t be surprised if Johnny Depp was just being drunk during these scenes. Over time he did get better, occasionally displaying hints of the Jack Sparrow we all know and love. But he still feels like a caricature of what Jack Sparrow really is, though I’m not even sure that it’s Depp’s fault. Brenton Thwaites plays Will Turner’s son and Kaya Scodelario plays a character named Carina, those two are the Will Turner and Elizabeth Swann replacements in this movie. The problem with them wasn’t their acting, they certainly tried as hard as they could to be great and they definitely have a lot of talent, but their characters weren’t that interesting. They do have motivations which are passable but that’s sort of it, these characters are written quite blandly. Javier Bardem was one of my favourite parts of the movie. He’s creepy, entertaining and completely chewing the scenery and he does really go over the top especially with his character being dead but I felt that it worked for the movie. However there’s not much to his character, just another villain wanting revenge against the main character, I like his backstory but aside from that there’s not much to him. Another one of my favourite parts was Geoffrey Rush who reprises his role as Barbossa. Unlike all the other characters, Barbossa had some sort of a story arc and it’s done quite well. I didn’t really have any problems with him. David Wenham is here as a British Royal Naval officer who comes into conflict with the main characters but is ultimately wasted, it’s almost laughable how useless and pointless his character is. There were also cameos from Orlando Bloom and Keira Knightley, which were nice to see. Oh, and Paul McCartney shows up in this movie for a brief moment, for some reason. It was a rather random cameo.

The action scenes were nice to watch, with them being quite over the top and were very entertaining. However there really wasn’t much tension in these sequences because we don’t care about the characters or their motivations. The climax itself is fine but was oddly enough brief and a little underwhelming. The CGI for the most part worked well, even the CGI on the dead people were done well. However at times it did have some occasional moments when there was CGI overload and some aspects looked a little fake. The soundtrack by Geoff Zanelli was really good, it really added to the film, especially with Salazar’s theme.

Pirates of the Caribbean: Dead Men Tell No Tales was better than I thought it would be. Maybe it’s because I just saw the movie as a simple dumb action flick, so I could look past many of the issues: it has simple characters, a revenge driven, scene chewing villain, over the top action, it was just an over the top action movie. On top of that, there are no other blockbusters about Pirates, so it is rather refreshing to see one in cinemas. There are many flaws, obviously, but this movie has just enough good parts about it to be entertaining.