Five years, eight months, 12 days and counting — that’s how long Debbie Ocean (Sandra Bullock) has been devising the biggest heist of her life. She knows what it’s going to take — a team of the best people in the field, starting with her partner-in-crime Lou Miller (Cate Blanchett). Together, they recruit a crew of specialists, including jeweler Amita (Mindy Kaling), street con Constance (Awkwafina), suburban mom Tammy (Sarah Paulson), hacker Nine Ball (Rihanna), and fashion designer Rose (Helena Bonham Carter). Their target — a necklace that’s worth more than $150 million.

I was a little sceptical about Ocean’s Eight. It had a lot of potential, with it being a spinoff of the famous Ocean’s series directed by Steven Soderbergh and having a huge and talented cast including Sandra Bullock, Cate Blanchett and Anne Hathaway. At the same time the advertising for the movie made it look just okay and I was unfortunately not as excited for the movie as I feel I should be considering all the talent involved. Nonetheless I was curious enough to check it out and I’m glad I did. Ocean’s Eight was actually quite a bit of fun with the cast and was yet another reasonably well done heist movie. It does have some faults but its easy to overlook most of them. 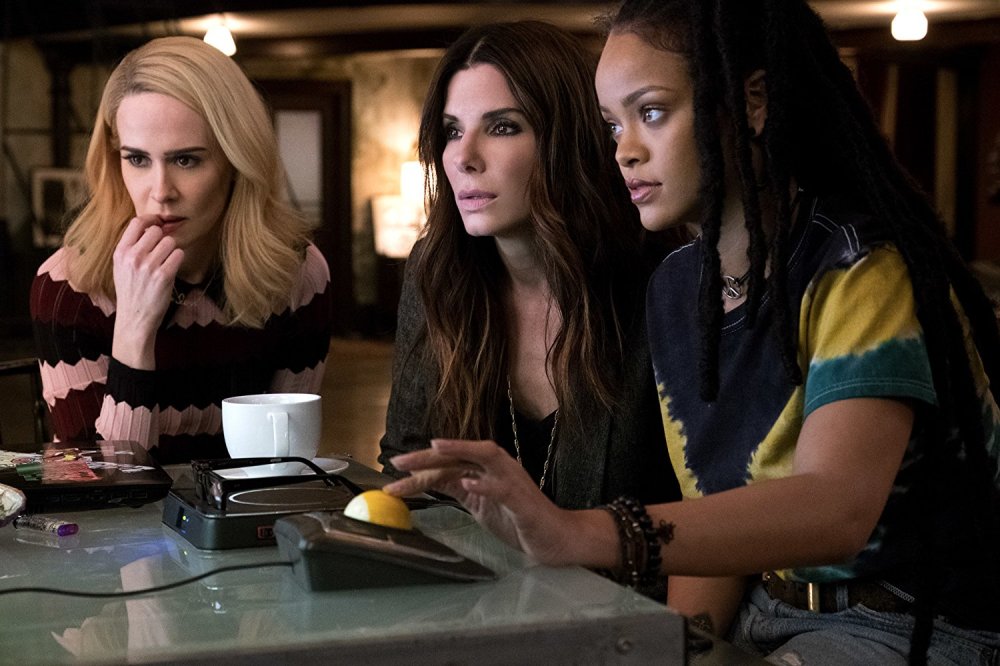 I watched the Ocean’s trilogy many years ago and I don’t have the best memory of it but I do remember liking it. Ocean’s Eight does similar things that other heist movies have done (like the original Ocean’s trilogy), it has a similar structure, and it has some similar sequences like the team recruiting montages and the twist montages where it reveals everything that happened. It doesn’t really do anything new but it does everything rather well. The first two acts do have moments where it drags and you aren’t as entertained or interested but it does pick up again within a few scenes later. Generally however, it is entertaining, and I was consistently entertained in the 3rd act.

As previously mentioned, Ocean’s Eight has a great cast, with Sandra Bullock, Cate Blanchett, Helena Bonham Carter, Sarah Paulson, Anne Hathaway and more and they play their roles well. Some give better performances than others, and they aren’t giving some of the best performances of their careers but they are good here. They have great chemistry and play off each other really well. The two standouts for me though were Helena Bonham Carter and Anne Hathaway, they really were highlights of the film. The weakest performance of the movie was James Corden, he doesn’t have a massive amount of screentime and he’s not bad, not even annoying or anything. But he is very distracting and feels miscast in the role, he plays it like he’s James Corden and not a character. 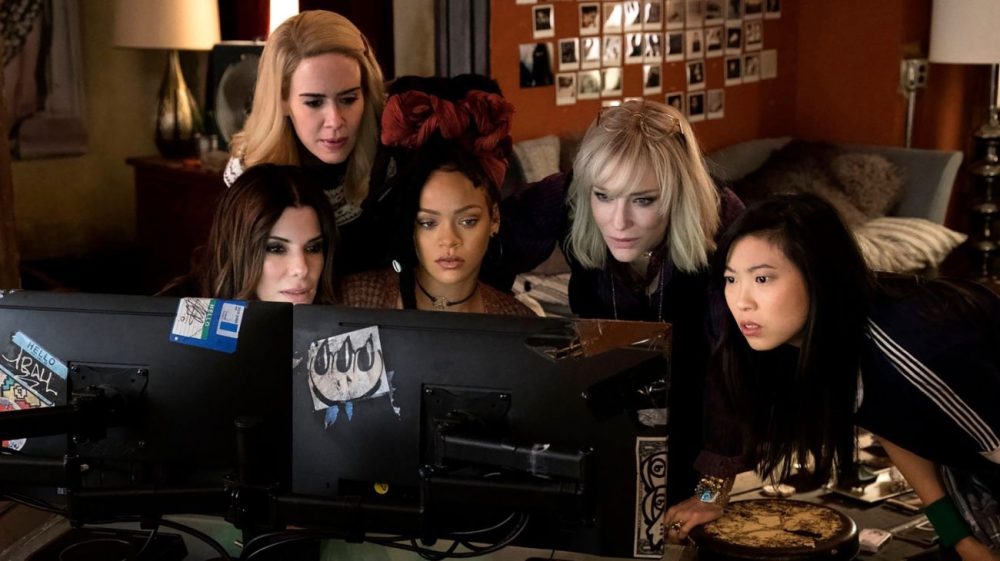 Gary Ross directs this movie well enough but you do feel the lack of Steven Soderbergh. It does have some stylistic moments and it’s fine and all but it’s missing something. I’m not saying that Steven Soderbergh himself needed to be directing this movie, and Ross’s direction isn’t bad but I think Ocean’s Eight would’ve benefited from better direction.

Ocean’s Eight was a lot of fun. Even if you haven’t watched the original Ocean’s trilogy, that won’t negatively affect your experience of the movie. The cast was great and it was entertaining watching them come together to pull off a heist. It does have some issues but it’s not enough to take away from the overall experience. I do hope that we get at least a couple more movies with these characters, it definitely has potential. 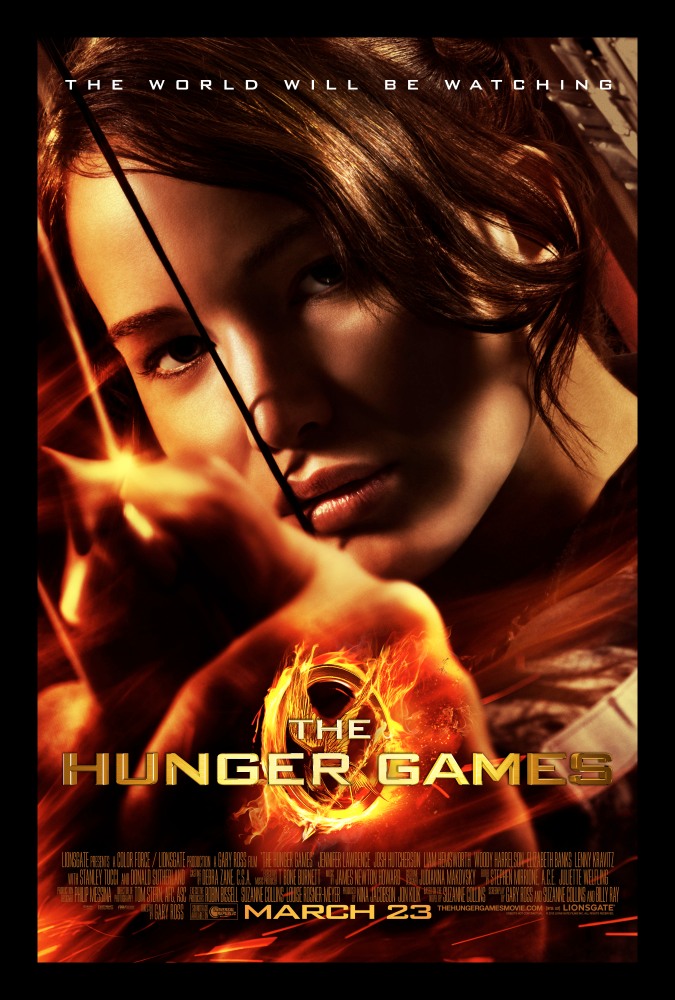 Set in a future North America known as “Panem”, the Capitol selects a boy and a girl between the ages of 12 and 18 from each of the twelve outlying districts to compete in the annual “Hunger Games”, a televised fight-to-the-death. The film is centred on Katniss Everdeen (Jennifer Lawrence) – a 16-year-old girl from District 12, who volunteers for her 12-year-old sister, Prim, when Prim’s name is chosen – and Katniss’s fellow District 12 tribute, Peeta Mellark (Josh Hutcherson), with whom she has some rather dramatic history. Katniss is then rushed to the Capitol, where she undergoes intense training before being thrust into the arena to fight to become the victor of the seventy-fourth annual Hunger Games.

The Hunger Games is a decent movie and is much better than some of the other young adult book adaptations. However I do think that it is a little overrated. Although the acting is good and the writing is decent, the story wasn’t always engrossing and the action scenes are filmed shakily. Catching Fire greatly improved over the first film but The Hunger Games is still by no means a bad movie. It’s still worth watching if you haven’t seen it already but I don’t think it’s as great as others had said it was. 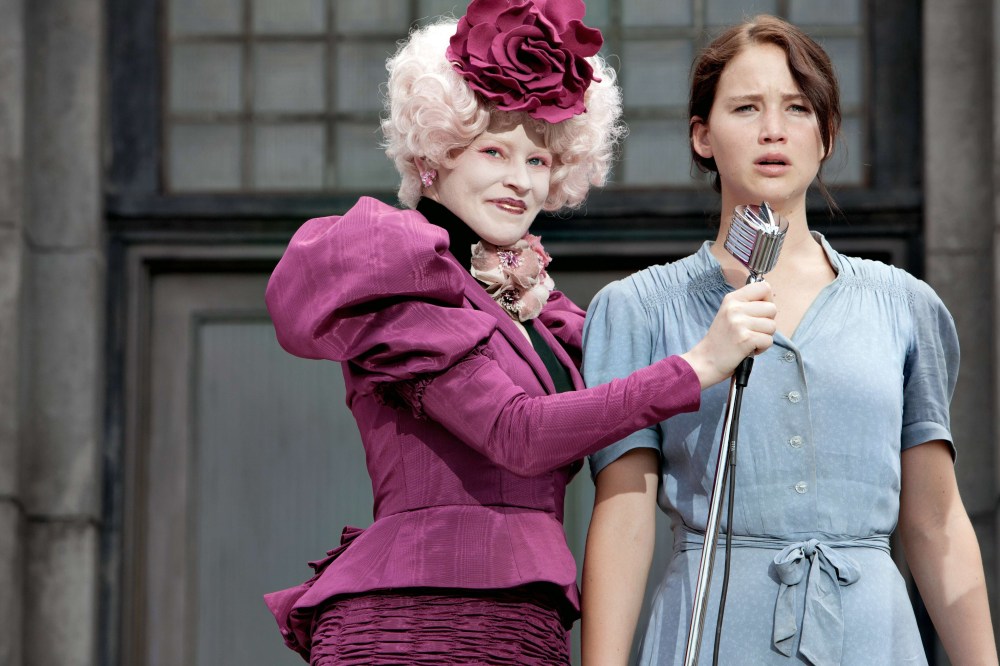 I wasn’t completely sucked into the story but it was easy to follow and I was interested in what was going on. The movie was well balanced, with its character developing moments and the action. I also should probably give The Hunger Games credit for having a much darker tone than most young adult book movies. One problem I had with the movie that I wasn’t entirely attached to these characters (except for Katniss), so when certain things happened to them, (for example when certain people died) I didn’t really feel anything for them. I also didn’t really buy the forced love subplot between Katniss and Peeta, it comes out of nowhere, but that’s just a minor flaw of the movie. 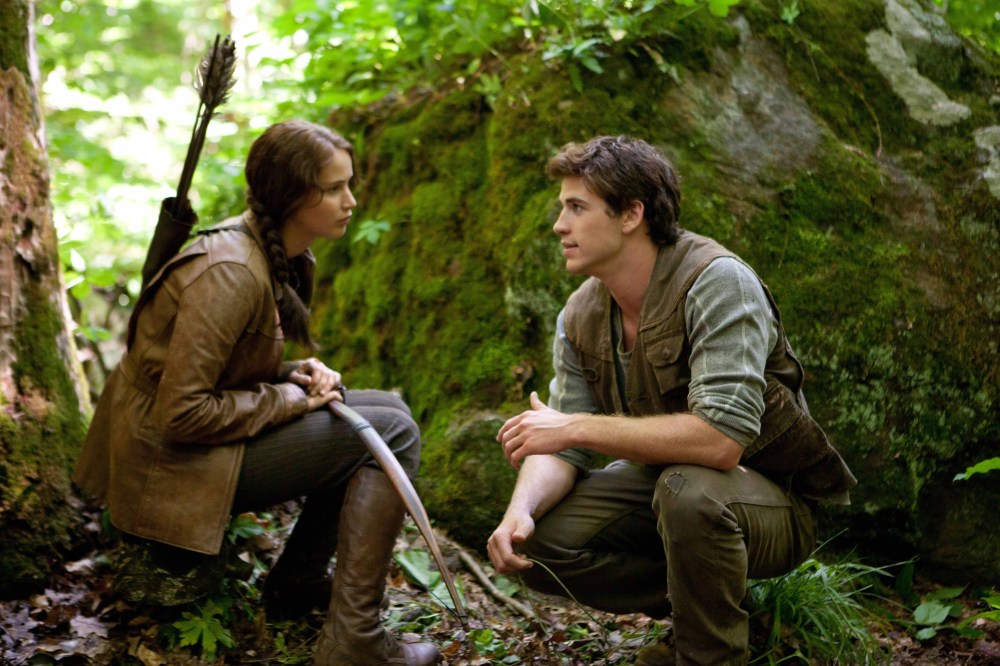 Jennifer Lawrence is great as Katniss, and is by far the most interesting character in the whole movie, which is funny when you consider the fact that Katniss really isn’t an interesting character. All of this comes from Lawrence’s performance, she makes her character interesting and believable. The rest of the cast like Josh Hutcherson and Woody Harrelson do quite well in their roles but I didn’t really remember them as much as Jennifer Lawrence. A problem I had was that some of the other children in the Hunger Games were just one dimensional and generically evil, but I think that’s more of a fault in the writing.

The Hunger Games is a decent film which spawned a lot of other young adult adaptations, some of them better than others. This film doesn’t always succeed, its story wasn’t always interesting and the action scenes are at times incomprehensible. Despite its flaws, I still say it’s still worth watching if you haven’t seen it before. However Catching Fire improved upon this movie and fixed a lot of the issues that this film had, resulting in a great and much better movie.