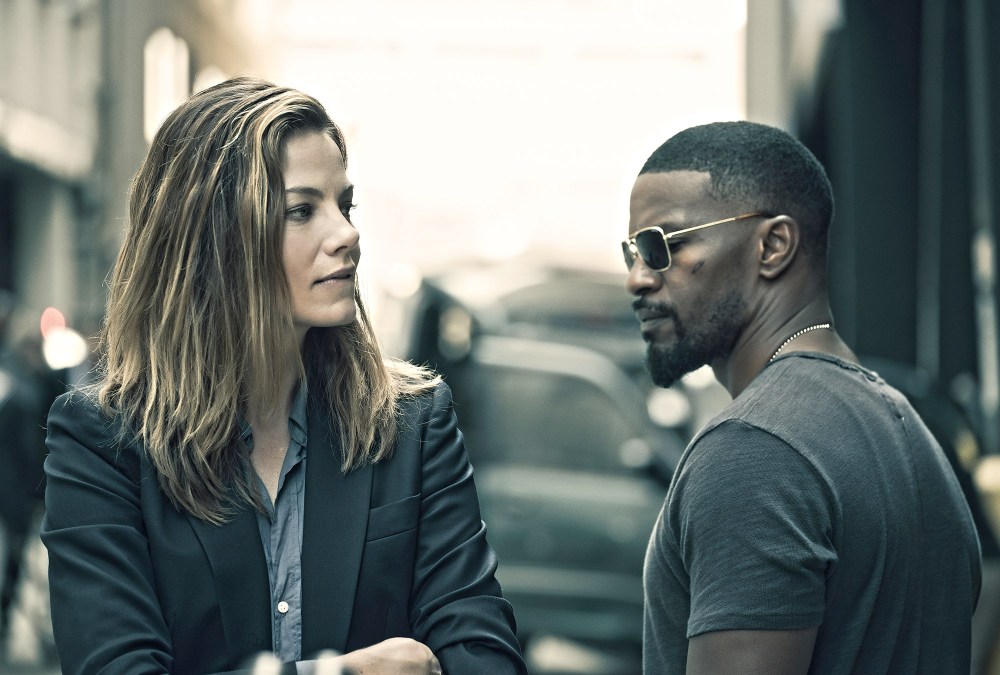 Undercover Las Vegas police officer Vincent Downs (Jamie Foxx) finds himself caught in a high-stakes web of corrupt cops, internal affairs and murderous gangsters. When a failed heist leads to the kidnapping of his teenage son (Octavius J. Johnson), Downs must race against time during a wild and restless night to save him and bring the criminals to justice.

I didn’t hear a lot of good things about Sleepless and after watching it I can kind of see why. Sleepless is a typical, average action crime flick that ultimately doesn’t have anything good enough about it to warrant seeing it. Despite the talented cast involved and even though they tried their best, they’re just not enough to save this movie.

Sleepless is a remake of the original French 2011 film Sleepless Night which I haven’t seen but apparently is good, so already this movie feels kind of pointless but I can’t compare the two films. This film follows so many action crime movie clichés and there’s not much in terms of substance. We only have around 15 minutes of set up before the plot kicks in with Foxx’s son being kidnapped. There is not much in the way of complexity with these characters, there isn’t much depth to the plot or characters. I will say that Sleepless isn’t particularly convoluted and it is straightforward. It’s not necessarily good but after seeing so many bad action movies being needlessly convoluted, it is a pleasant surprise to have one that’s easy to follow. That doesn’t make the movie good by any means, it’s not like a straightforward entertaining action movie, its straightforward but it really struggles in creating anything entertaining or interesting. There are some moments that are quite silly with some of the dialogue and decisions made but that’s it, it doesn’t even work on a ‘so bad it’s good’ level. For some strange reason it tries to set up a sequel at the end, I don’t know why they even bothered to be honest.

There are a lot of talented people starring in this movie but they aren’t enough to elevate the overall film. It doesn’t help that they are playing at best 2 dimensional characters with barely any depth. Jamie Foxx is a great actor but has done much better in other movies. To his credit he tries his best here. Honestly most of the main cast does, with the supporting cast consisting of talented people like Michelle Monaghan and David Harbour. The villains are pretty average, Scoot McNairy (a pretty good actor) gets really nothing to do but be a cartoonish gangster villain, to his credit he does go fully over the top. Even though most of the cast is fine, Foxx’s son played by Octavius J. Johnson… not so good.

Some of the cinematography to be fair, is decent enough. Some of the direction is fine but its nothing particularly special. The action scenes are over the top and kind of silly. The fight scenes in particular, there are some fight scenes where its so over the top and laughable, and its difficult to take it seriously. The editing during fight scenes is pretty bad, with so many unnecessary cuts. However, it’s not incomprehensible, it’s not Taken 3 level of incompetence.

Sleepless wasn’t horrendous but it is pretty average overall. The only things that you can really get are the cast trying their best while playing incredibly underdeveloped and flat characters. Honestly it feels like it either needs to be much better as a movie or more ridiculous and stupid because there’s not much to say about it. I can’t say I hate it because honestly it didn’t leave that much of an impression on me. Not a good movie by any means however.