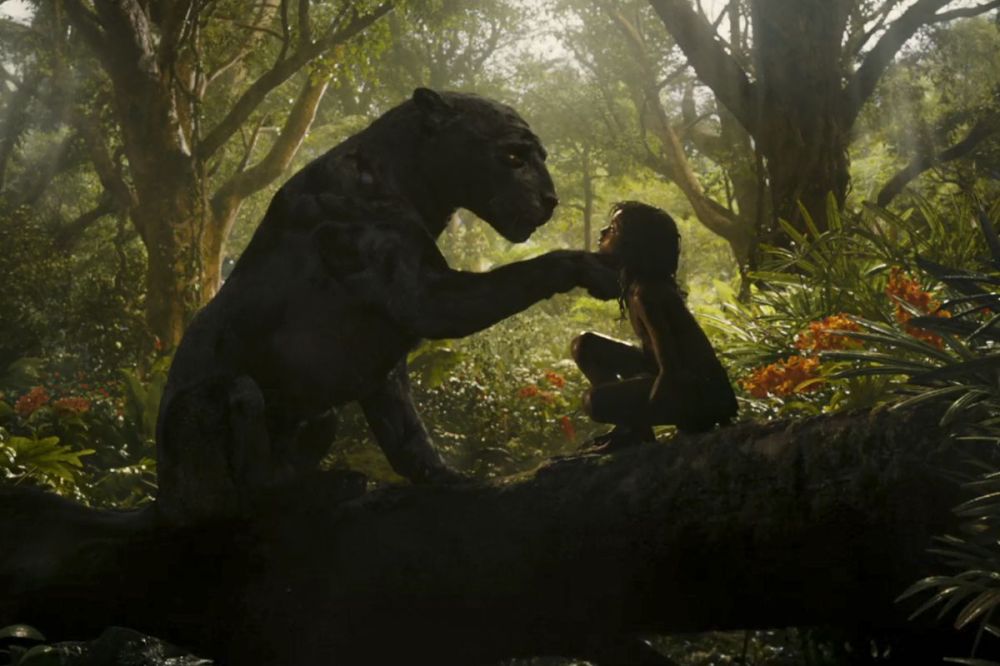 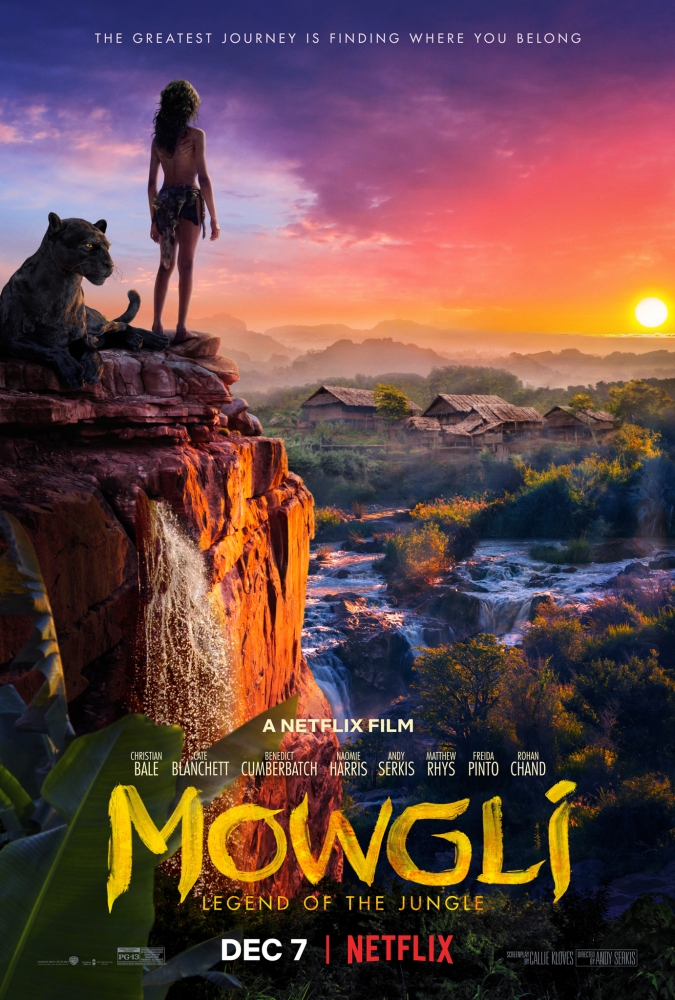 Human child Mowgli (Rohan Chand) is raised by a wolf pack in the jungles of India. As he learns the often harsh rules of the jungle, under the tutelage of a bear named Baloo (Andy Serkis) and a panther named Bagheera (Christian Bale), Mowgli becomes accepted by the animals of the jungle as one of their own, but the fearsome tiger Shere Khan (Benedict Cumberbatch) doesn’t take a liking to him. But there may be greater dangers lurking in the jungle, as Mowgli comes face to face with his human origins.

Mowgli: Legend of the Jungle (originally titled Jungle Book: Origins) was one of my most anticipated movies of the year. With the direction of Andy Serkis, the involvement of actors like Christian Bale, Benedict Cumberbatch and Cate Blanchett, but most of all a darker and more accurate to the source material adaption of Jungle Book, I was curious about the movie. While not quite great, Mowgli is a solid movie that’s well worth the watch. 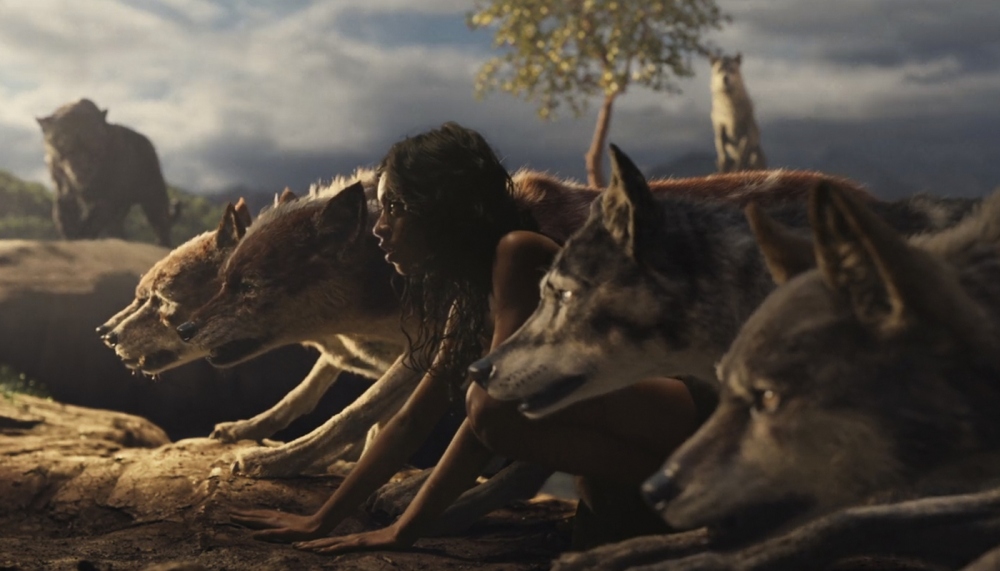 It’s difficult to talk about this movie without mentioning Jon Favreau’s The Jungle Book, which was pretty much a direct live action adaptation of the animated movie. I will be making some comparisons between the two but I will refrain from talking about which version I prefer. Ultimately both versions are great for what they are. Although I never read the original Jungle Book stories, from what I can tell Mowgli is a much more accurate adaptation of it. The movie is much more darker and while it doesn’t necessarily creep into R territory, there are definitely some scenes that a lot of children will be scared by. That’s not to say that there aren’t some light moments, its just that you won’t see Baloo signing “Bear Necessities” or anything like that. The characters are also rather different from what you remember in the previous Jungle Book movies. For example, Baloo is a grumpy bear who lived closely with the wolves with Mowgli grows up being mentored by him instead of encountering him for the first time during the story, and Kaa isn’t really a threat to Mowgli. The events and focus of the story are a bit different as well, while Mowgli meeting other humans played a small part in the other versions, here it plays a more larger part. So for those who wonder whether it’s just the same movie with a dark filter, it’s not. The movie is an hour and 45 minutes long and from start to finish I was actually liking it quite a bit. This doesn’t necessarily make it better than Favreau’s version but I really liked the dark tone that they went with, and the darker and scarier moments feel earned and not forced at all. The one thing with the story that I didn’t like so much is that it has a very abrupt ending, just a scene or two more and it would’ve improved it much more. 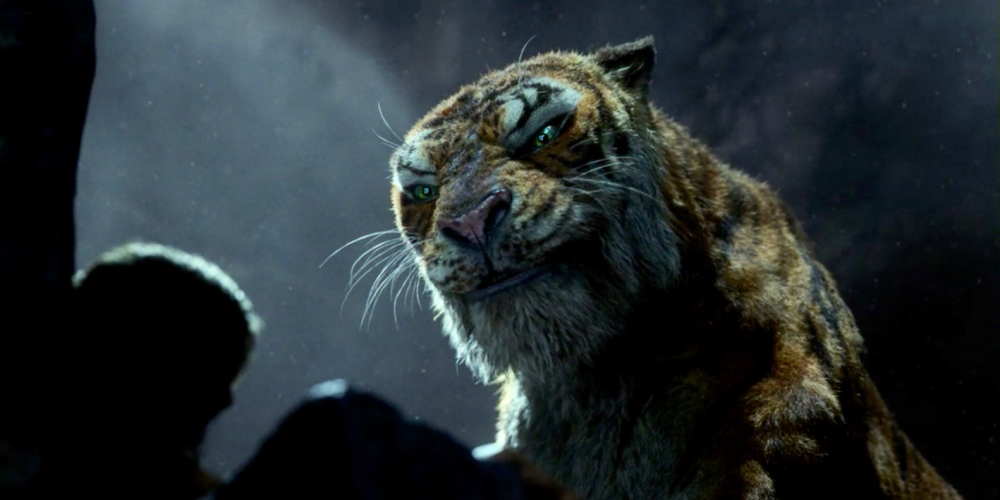 First of all worth talking about when it comes to acting is the titular Mowgli, played by Rohan Chand. Much of this movie relies on him being great and he really was. He was great at the very physical scenes and he was also great at the more emotional parts of the role. There is a reasonably large talented cast involved in the motion capture as well. The cast includes Eddie Marsan, Naomie Harris, Peter Mullan, Tom Hollander and Jack Reynor who are all great. However some stood out more than others. There is Christian Bale as Bagheera, with a bit of different take on him, who’s great. Appearing in front of the camera as well as behind was Andy Serkis who plays Baloo. Again, different take on Baloo and Serkis is an expert when it comes to motion capture, so it’s no surprise that he’s great here, a real scene stealer. Benedict Cumberbatch already played a motion capture role with Smaug in the Hobbit movies and here also plays Shere Khan. Whereas Idris Elba in Favreau’s Jungle Book was an intimidating and menacing force to be reckoned with, Cumberbatch’s feels like a monster or a demon, who is made all the more threatening by his voice. I do wish that we got a little more of him though but he owns every scene that he’s in. Cate Blanchett as Kaa was great. They seemed to have taken inspiration from Favreau’s Jungle Book by having Scarlett Johansson voice Kaa instead of a male actor, and both versions actually worked well with this. However Mowgli’s version works much better for the sheer fact that we get Kaa for more than one scene. We don’t get a ton of her but she steals the scene when she appears, and Blanchett’s voice adds so much to her, giving Kaa a sort of mysterious presence.

Andy Serkis handles this movie well as director and it really looks visually stunning. Unlike the 2016 Jungle Book movie, Mowgli uses motion capture. This makes the characters appear more expressive and really enhances the performances of the actors, and as I said before the performances are great. Most of the time it is great, however there are some character designs which look bizarre and don’t work at all with some of the animals. The lighting compared to The Jungle Book from 2016 is darker but it works for the tone of the movie.

Mowgli: Legend of the Jungle is solid but I can understand why it was put on Netflix. It was only released a couple of years after the last Jungle Book adaptation, and also it was quite dark, which would no doubt mean that it wouldn’t have that much interest from the general audience. I personally found it to be a well made and different take on the familiar story, and is worth seeing at the very least for the visuals. No matter your thoughts on other The Jungle Book movies, I do recommend at least checking out Mowgli. 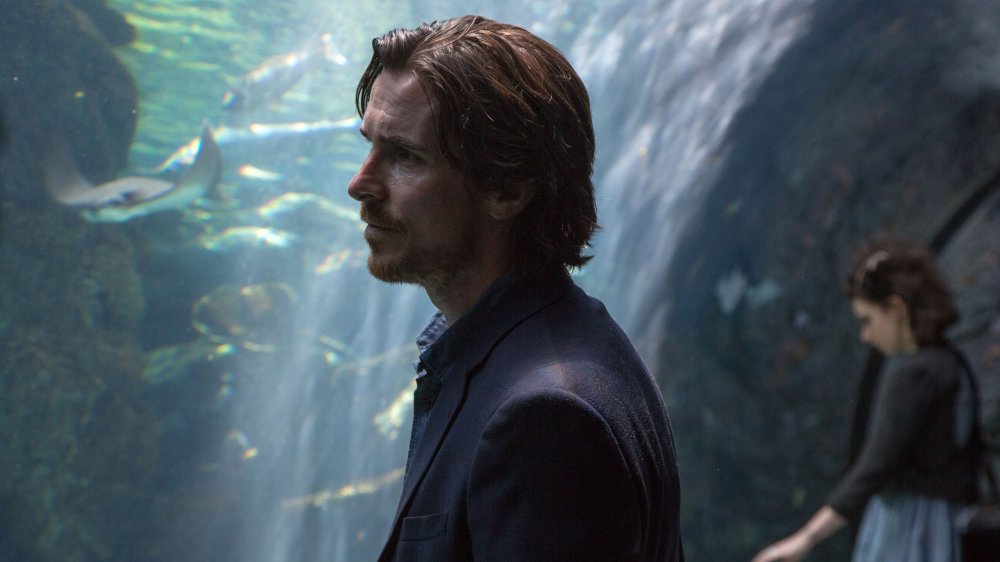 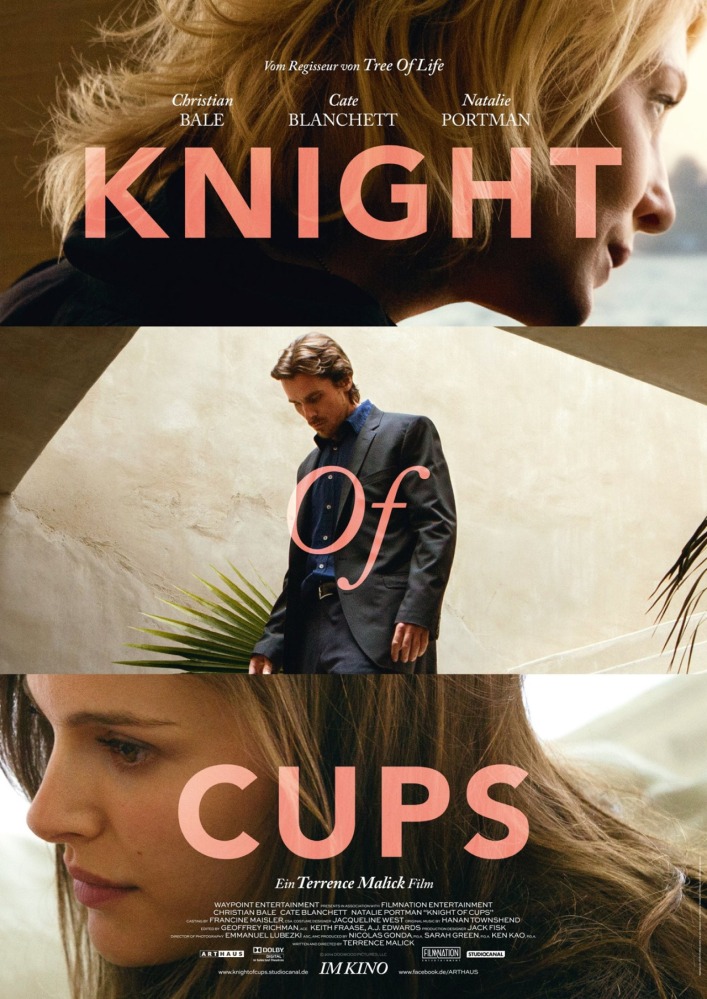 A writer (Christian Bale) indulging in all that Los Angeles and Las Vegas has to offer undertakes a search for love and self via a series of adventures with six different women.

I remember waiting for this movie for a long time. I wasn’t sure what I was going to think of it as Terrence Malick is a very polarising filmmaker but after watching and liking Tree of Life (which was quite unconventional as a film), I thought that I had a good chance of enjoying it. I recently watched Knight of Cups and… I really don’t know what to think of it. It is beautiful looking and it has a lot of great actors in it but otherwise it really didn’t do anything for me.

Describing the movie is hard. The basic structure of Knight of Cups is split into segments where Bale interacts with particular people. I’ve only seen 3 of Malick’s movies, Tree of Life, Badlands and now Knight of Cups and I liked the last 2. Even Tree of Life, for how unconventional it was I liked it but most of all, I could actually somewhat understand parts of it. I’m not even sure what Knight of Cups is supposed to be about, I couldn’t connect to it. So with that connection to whatever Malick is going for being gone, it takes away so much from the movie. When I’m just watching all these talented actors just internally monologing some deep poetic speech while the camera just follows them and I don’t understand what its supposed to mean, you can see how I would find it frustrating and pretentious. Don’t get me wrong, Terrence Malick no doubt had some idea of what he was filming, he wasn’t just filming nice looking stuff and calling it art. But whatever he was going for, I didn’t get it at all. The film drags consistently and constantly, at times its borderline a parody of a Terrence Malick movie with how self indulgent it is. I find it very difficult to recommend Knight of Cups to anyone, unless you are a die hard Terrence Malick fan. 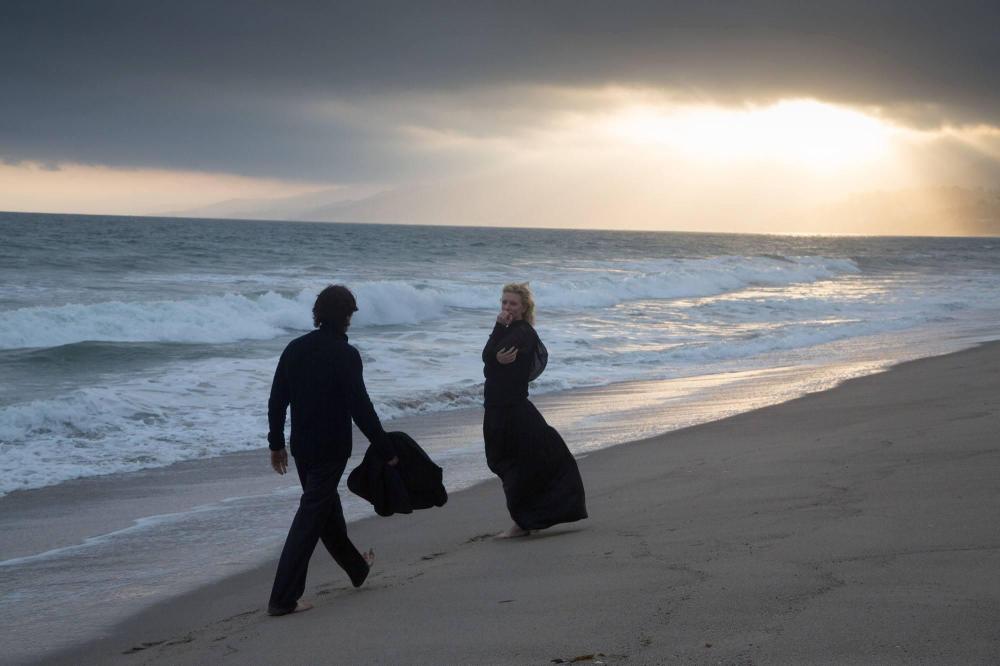 There’s not really much to say in terms of acting, whereas most of the characters in a film like Tree of Life had some sort of character, from what I can tell all the characters in Knight of Cups represent ideas or something. Christian Bale here is pretty much like Sean Penn in Tree of Life, except he’s the main ‘character’ and appears from start to finish. He doesn’t really at any point become a character and just feels flat, Bale barely gets to do anything to leave an impression. Supporting actors include Cate Blanchett, Wes Bentley, Antonio Banderas, Natalie Portman and Imogen Poots and while they are good in their ‘roles’, they don’t leave too much of an impression either. Some actors involved were straight up cameos with Jason Clarke and Joe Manganiello, and supposedly Dane DeHaan and Joel Kinnamon was in it as well (I have no idea where they were though). The only performance that really stood out to a degree was Cate Blanchett but even then she’s not in the movie that long. 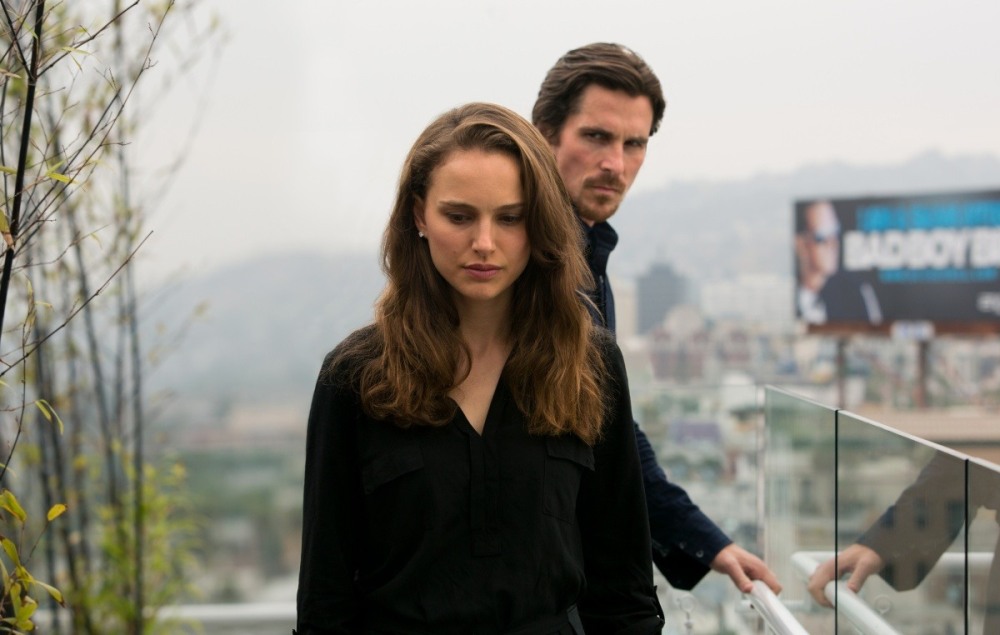 This movie is shot beautifully like all of Terrence Malick’s films. The locations, lighting, colouring, all of that was great and was probably one of the only things I liked in the whole film. That’s honestly is the only thing that I can guarantee you’ll think with Knight of Cups, that it looks great. The film also seemed to have a dream-like feeling to it, and the score by Hanan Townshend also played a part in that. 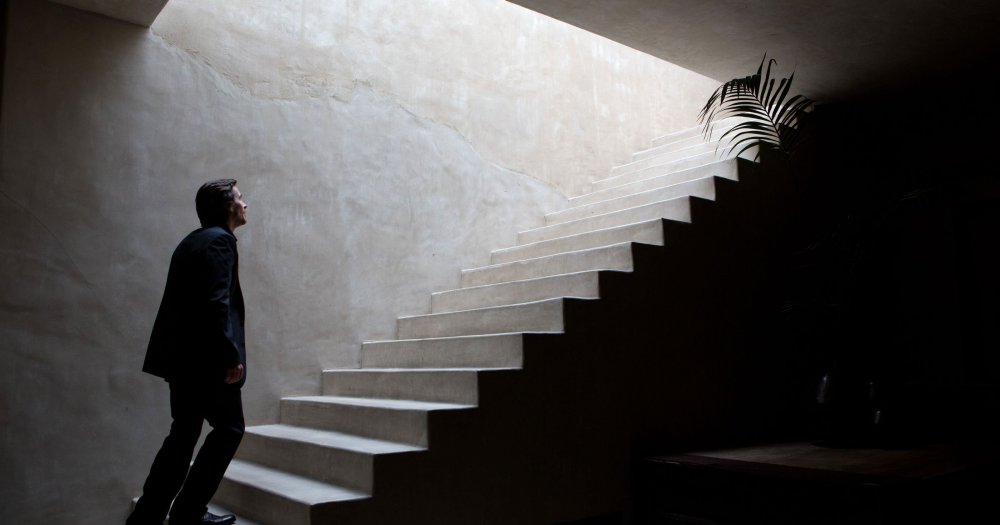 Having finally seen it, I can see why Knight of Cups was so divisive. I’m not entirely sure I actually like it myself. And it’s not that I don’t like Terrance Malick as a director, I liked Badlands and Tree of Life, and the latter was very unconventional. I guess I just connected a lot more with Tree of Life than Knight of Cups, which is why with KOC, it really didn’t work for me. I guess the movie is beautiful looking and that’s somewhat enough for me to call it somewhat above average but only just. If you flat out don’t like Terrance Malick’s other films, you’d probably hate Knight of Cups. I’m going to try watching Song to Song sometime soon, and I’m just hoping that Knight of Cups was the most Malick film he ever made.