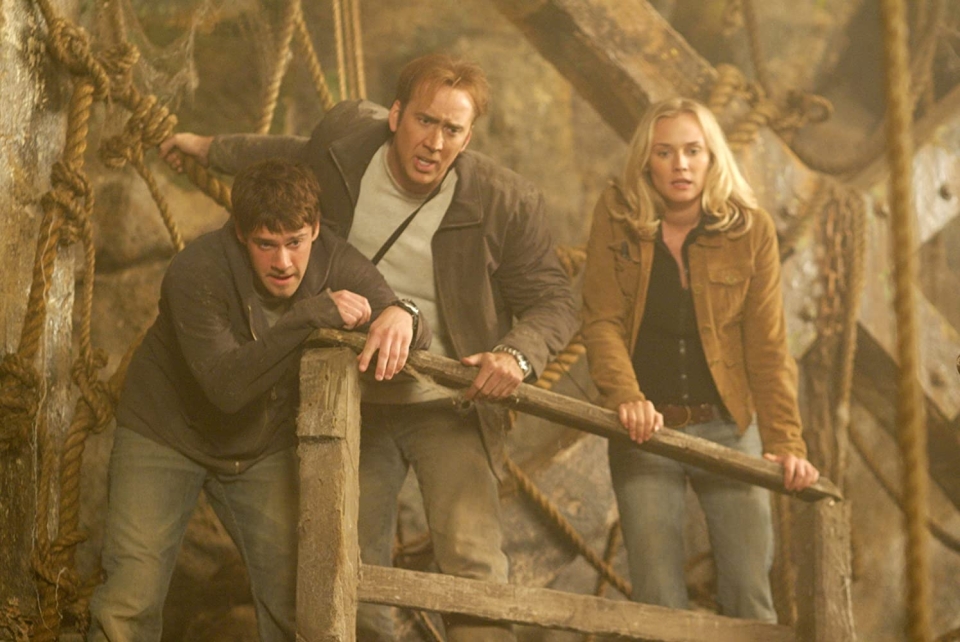 Modern treasure hunters, led by archaeologist Ben Gates, search for a chest of riches rumored to have been stashed away by George Washington, Thomas Jefferson and Benjamin Franklin during the Revolutionary War. The chest’s whereabouts may lie in secret clues embedded in the Constitution and the Declaration of Independence, and Gates is in a race to find the gold before his enemies do.

I remember watching National Treasure for the first time, I was quite young at the time, and it was the first film I saw that had Nicolas Cage in it. I enjoyed it but wondered how it would be on rewatch, and whether it would still hold up over a decade and a half later. Thankfully, I think I can say that it does. While its not great, National Treasure is still a lot of fun to watch.

The story is a fairly interesting and fun adventure with a lot of excitement throughout, helped by the fast pace. You’re right there with the main characters as they make discoveries and solve puzzles in order to unravel the central mystery. As far as adventure movies go, it occasionally meets its aspirations, but could’ve been better. As it is, it’s a solid riff on much better action adventure movies. Its not just limited to the main characters exploring tombs, there’s also a conspiracy aspect, as well as a heist aspect. The history and science are definitely messy and aren’t realistic, but it is an absurd movie overall. One of the things most known about this movie is that a key part involves Nicolas Cage having to steal the Declaration of Independence, and that is gloriously silly as that sounds. Even some of the logic of the plot can be hilarious. Nicolas Cage and Sean Bean start off hunting treasure together, but they separate when Bean wants to steal the Declaration of Independence and Cage doesn’t want to. So when Bean decides to go get it himself, Cage decides to go and steal it first. Thankfully, National Treasure has the right tone, not taking itself too seriously, but not going too overboard and risking becoming a self parody.

The cast are quite enjoyable. Nicolas Cage made for a charismatic, likable and entertaining lead as Ben Gates. Its definitely not one of his craziest performances in some of his other movies like Face/Off, but he gave his character a lot of energy, and is fun to watch. Diane Kruger is also good, and Justin Bartha is solid as the comic relief with some great comedic timing. There are also other great actors who have parts to play in this, including Jon Voight, Harvey Keitel and Christopher Plummer. Sean Bean is the villain and while the writing for him is nothing special, he does deliver on his part as an antagonist.

If there’s an aspect of National Treasure that I wished was better, it was the direction. Jon Turteltaub’s work is decent, but it needed something more. The action is relatively fun, there are some good environments sets and designs, and the score from Trevor Rabin is good (especially the catchy main theme). Its just that there’s nothing distinct about this movie on a directing or style level that separates it from other similar movies.

National Treasure is comparable to The Mummy movies starring Brendan Fraser, not the best action-adventure movies (i.e. not on the level of Indiana Jones), but nonetheless very entertaining for what it is. It’s a fun ride that doesn’t take itself too seriously, helped by the solid cast led by Nicolas Cage. If you haven’t seen it already, I think its worth checking out. 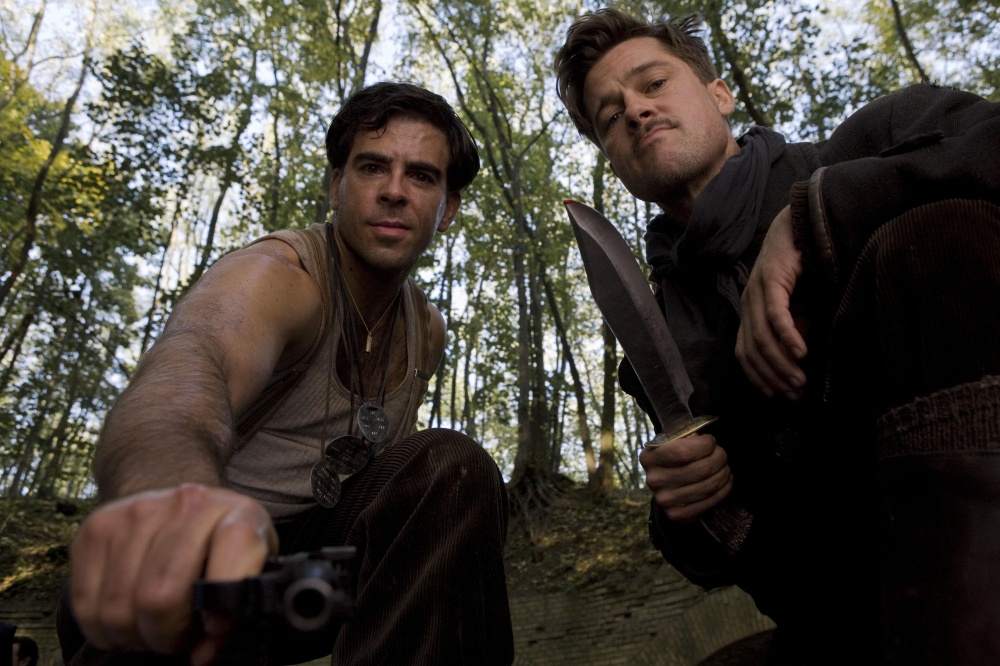 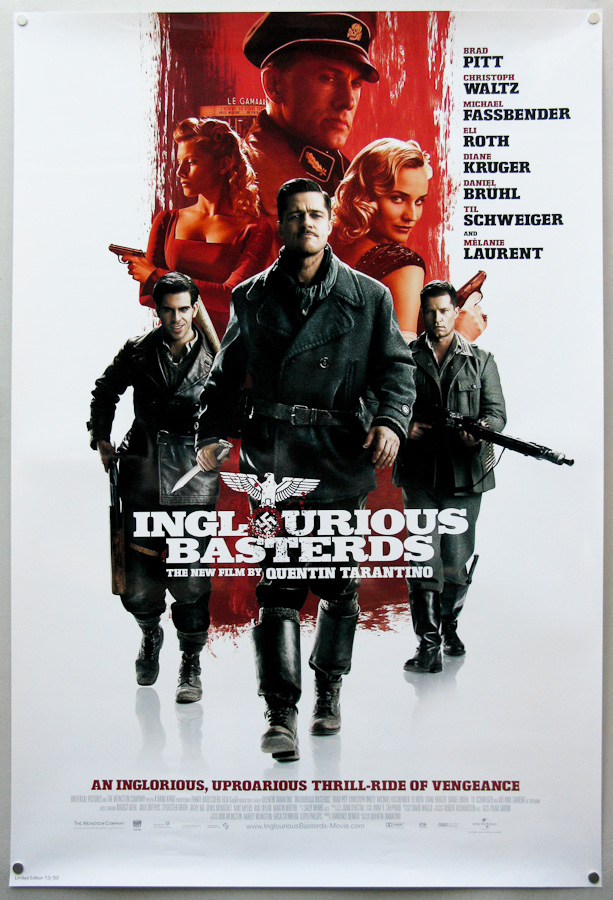 In World War 2, a group of American soldiers led by LT. Aldo Raine (Brad Pitt) is sent into Nazi occupied France to kill as many Nazis as possible. A plan is made to kill high ranking German officers at a movie theatre. That movie theatre belongs to Shosanna Dreyfus (Melanie Laurent), a Jewish refugee who witnessed the deaths of her family by Colonel Hans Landa (Christoph Waltz). When she finds that every major Nazi officer is attending for a premiere, she hatches a plan of her own.

Inglourious Basterds is widely considered one of the best films from Quentin Tarantino, and for good reason. The acting, direction but most of all the writing makes this such a unique, different and entertaining movie, which has gotten better every time I’ve watched it. One of his most complete movies and definitely one of his top tier movies, if not his all time best.

It’s no surprise that Quentin Tarantino’s writing is fantastic, in its 2 hour and 20 minute runtime it doesn’t miss a beat. From start to finish the film is riveting, a good example of one of these scenes, happens to be one of the best scenes, which is at the very beginning; it was a very tense and it’s a credit to the actors and Tarantino. One thing that is different from his other movies is the way it is structured; the film is broken up into chapters, focussing on particular characters. It’s only in the final chapter where both the Basterds, Hans Landa and Shosanna are in the same chapter. As usual the dialogue is fantastic, and while Tarantino could be considered self-indulgent with some of the dialogue in this movies, here all of it feels just right. Another difference is the use of 4 multiple languages throughout the movie, which was definitely a different turn from Tarantino and made things interesting. The final act of this movie is exhilarating and very entertaining in one bloodbath of a finale.

Tarantino gets the best out of everyone who stars in his movies and Inglourious Basterds is no exception. Brad Pitt is hilarious in this movie, especially with his very overplayed accent. Other actors like Eli Roth, Diane Kruger, Michael Fassbender and Daniel Bruhl, all have great moments in this movie and contribute to the movie immensely. There are however two standouts among the cast. The performance that steals the show of course is by Christoph Waltz as Hans Landa. Waltz is magnetic when he’s on screen, that aforementioned opening scene establishes him as an absolute screen presence. Melanie Laurent is often overlooked in this movie but she’s really fantastic here, definitely deserving of much more praise. 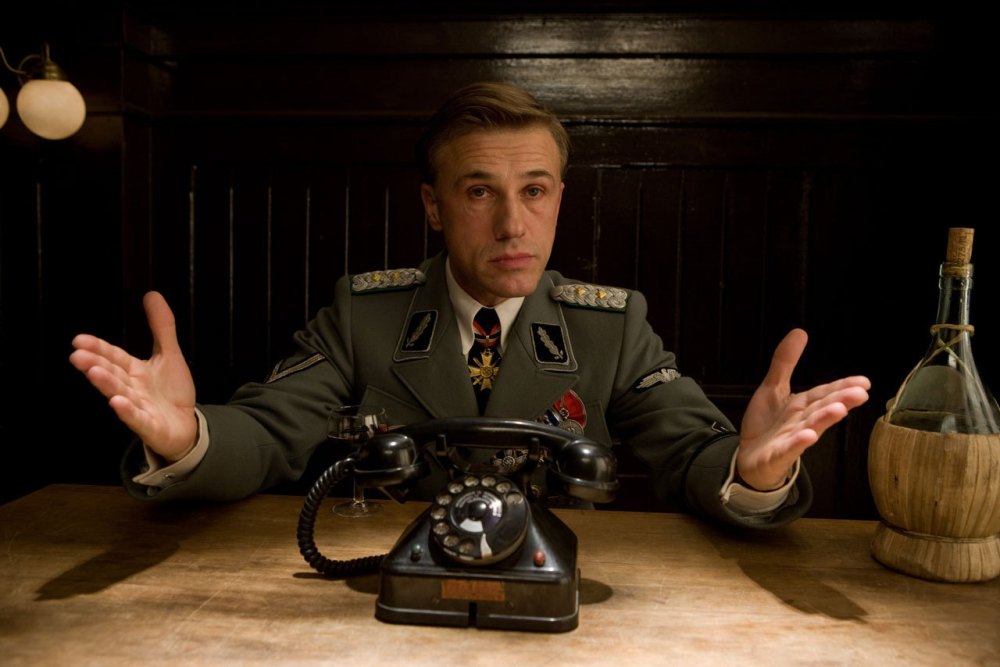 Quentin Tarantino effortlessly directs this movie with his style and infuses it with a lot of energy. Tarantino really helps to set the film in the 1940s, from the production design to the costumes, all of it was done well with great detail and it really paid off. Helping this is the music picked for it, even when some of the songs that are used in a much later time period (including Cat People by David Bowie), they fit perfectly in the scenes they are placed in. 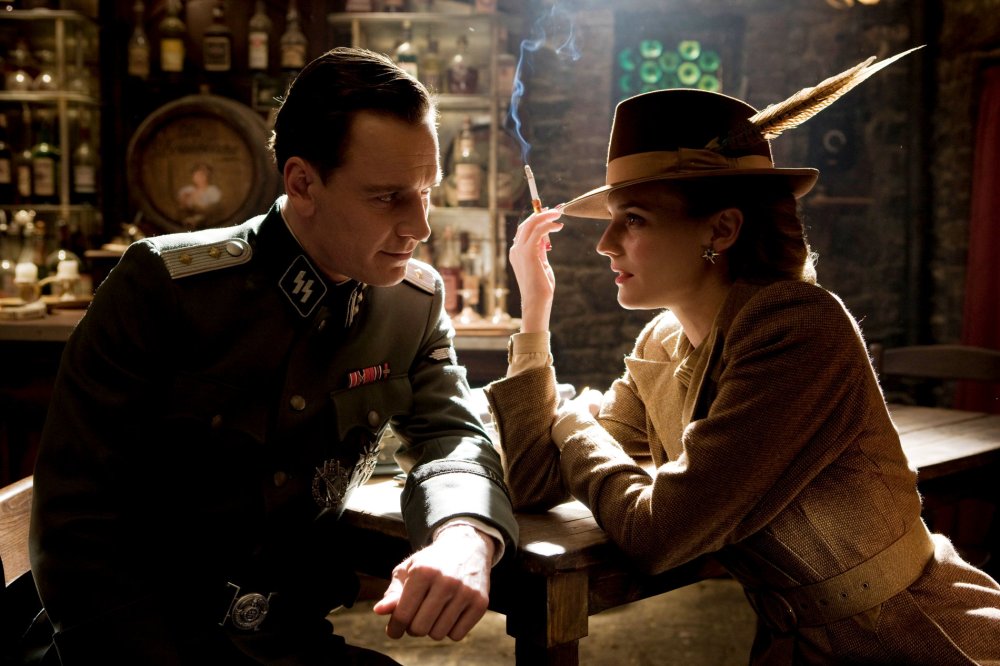 Inglourious Basterds has gotten better every single time that I’ve seen it. The performances from its large and talented cast (especially from Melanie Laurent and Christoph Waltz) were great, and of course the writing and direction is at the core of what made it work so well. Though we are still a little while away from Once Upon a Time in Hollywood, at this point in time I’d say that Inglourious Basterds may well be Tarantino’s best film yet. Definitely watch it if you haven’t seen it already.