A lone scientist (George Clooney) in the Arctic races to contact a crew of astronauts returning home to a mysterious global catastrophe.

I heard about George Clooney directing and starring in a movie for Netflix, and that the movie would be in the sci-fi genre. I went in with a relatively open mind considering the mixed reviews, and checked it out for myself. I wouldn’t say The Midnight Sky is bad but I wouldn’t call it good either. It’s for sure got some good elements but on the whole is just okay.

The Midnight Sky consists of two storylines playing at the same time. One is of George Clooney on a base in the arctic, the other is of a crew of astronauts in a ship in space. The Clooney storyline consists of him and a girl trying to make contact with the ship, enduring through harsh and cold conditions to do so. There are aspects of it that could’ve been handled better for sure, but I was relatively interested in it. I liked the simplicity, the dynamic that Clooney’s character has with the girl, and the steady and character driven approach. The whole movie probably would’ve been a lot more effective had it just been this. The other storyline is about a ship returning to earth and it just wasn’t interesting. It holds no emotional gravitas compared to the other, and so the emotional beats fall a bit flat. A big part of that is because we don’t really care about the characters all that much, the characterisation is very weak despite some attempts to define them. Unfortunately, I can’t even really call it a subplot because it has as much screentime as the Clooney storyline, there’s even a whole 20 minute period where Clooney doesn’t make an appearance, almost making you wonder whether he’s actually the main character in all of this. What’s not helping this storyline is that it feels very derivative of other sci-fi movies like Interstellar, Gravity and Ad Astra. Not that it’s inherently a bad thing, but it does highlight that The Midnight Sky just doesn’t succeed nearly as well as those other movies. It really says something that the only moment I really remember from this storyline was when the actors just start singing Sweet Caroline. The movie really is undercut not only by the second storyline, but the constant switching between the two. These two parts don’t really fit together well, and they end up making the tone uneven as they are essentially two separate sci-fi movies trying to co-exist and link together. The third act is where the two storylines come together and intersect, and it’s meant to be quite an emotional punch, but it really fumbles the bag with that and just has no impact at all. As you can probably tell already the biggest issue with the movie is the script, and there are plenty of other issues with it that I haven’t even gotten to yet. The dialogue a lot of the time is stiff and uninteresting, and you don’t really care about many of the plot twists. The use of flashbacks (mainly with George Clooney) weren’t handled the best and feel quite out of place. The longer runtime just makes the viewing experience that much more tedious, 2 hours may not sound long, but with the slow pacing combined with a less than riveting story makes it a bit of a slog. Another side note, the last scene with the credits was really awkward, it’s one of those credits where they play it right in the middle of the scene and so we are effectively watching them roll credits before the ending has actually ended. 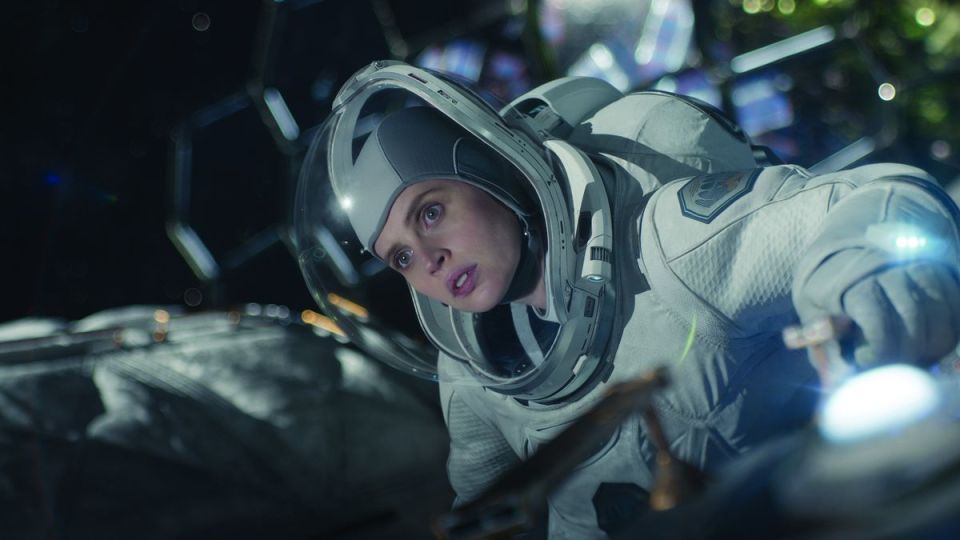 There is a good cast involved in the movie, but generally they aren’t utilised the best. George Clooney does well in essentially the lead role. His character doesn’t amount to much outside of a sombre and quiet person with a regretful past, but Clooney plays him well. The crew of the ship in space are played by Felicity Jones, David Oyelowo, Tiffany Boone, Demian Bichir, and Kyle Chandler. The actors played their parts relatively well but are definitely held back by their bland and underdeveloped characters, and so are quite forgetable. 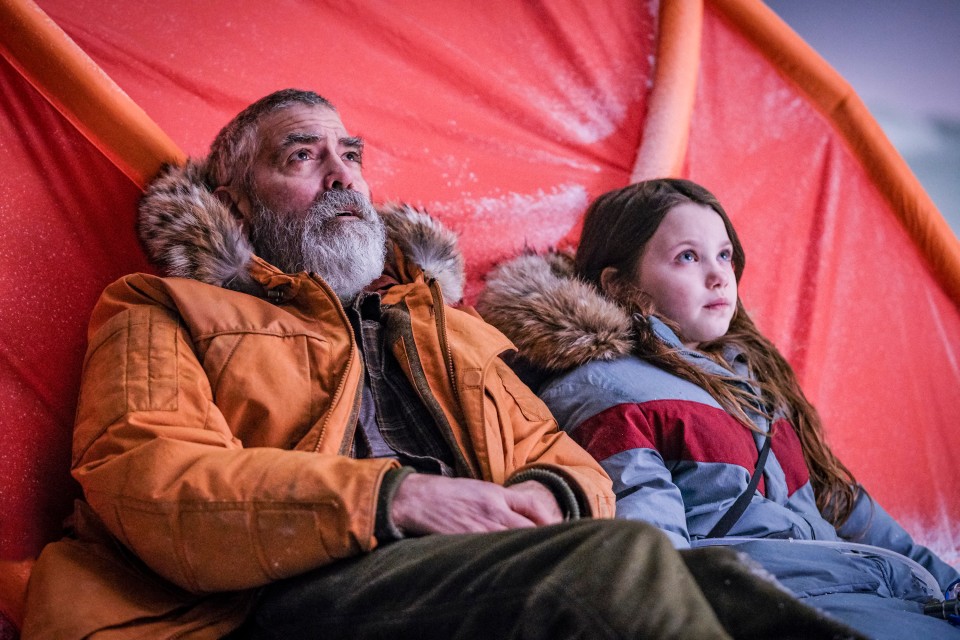 The visuals and direction from George Clooney are where The Midnight Sky works at its best. It’s quite a good looking movie, I like the visual effects, and the production quality is good for the most part. The setting that Clooney is at with the snowy wasteland looks great, and gives the film a uniquely chilly atmosphere. The scenes taking place in the ship in space look decent, but they look like every other sci-fi movie only a little worse. There’s also the score from Alexandre Desplat which is really good and does add something to the movie (even if it doesn’t really save it).

The Midnight Sky is a very flawed movie that manages to have some bright spots. George Clooney acts well in the lead role, and the visuals and other technical elements are solid and impressive at times. However much of the writing is where it holds it back, from a significantly worse second storyline, to a plot that fails to be compelling, interesting or resonant. If it was like 30 minutes shorter, it would’ve been easier to recommend. I guess if you’re really curious about The Midnight Sky, check it out for yourself, but otherwise its probably not worth it. 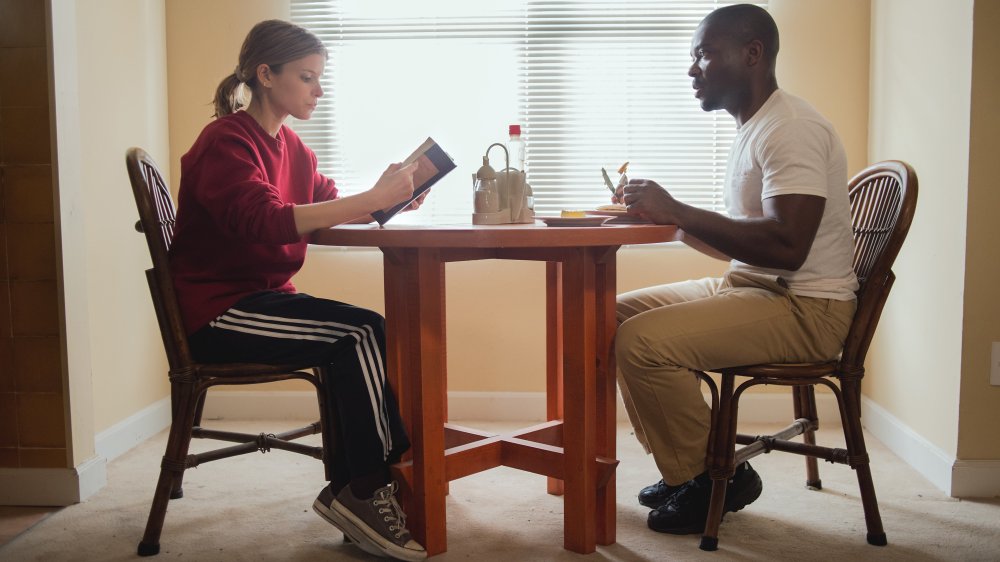 Brian Nichols (David Oyelowo) becomes the subject of a citywide manhunt after breaking out of a courthouse jail and killing four people. His frantic escape brings him to the apartment of Ashley Smith (Kate Mara), a single mother and recovering methamphetamine addict. Held hostage by Nichols in her own home, the scared woman looks for guidance from “The Purpose Driven Life,” Rick Warren’s best-selling, inspirational book. As she reads aloud, Ashley and her would-be killer come to a crossroad.

Honestly, I didn’t really think Captive was going to be that good of a movie, the trailer honestly looked terrible. The main reason I decided to see it were the leads with Kate Mara and David Oyelowo. Watching Captive, I have to say that it was better than I thought it would be but its still only decent at best. The performances are impressive enough but aside from that, there isn’t many good aspects about this movie. The story isn’t very ‘captivating’, the direction for the most part just feels basic, and the film doesn’t have the emotional impact that its trying to deliver. The lead actors really made this movie at least somewhat interesting to watch.

I think I should mention first of all that this movie is based on a true story, so any clichéd moment in the film I can’t really criticise because it (likely) happened. However, they could’ve done a better job at making it feel more real. Overall the story is passable enough but the only reason that some of the scenes had me interested are because of Mara and Oyelowo, take away their performances and those scenes just really aren’t interesting at all. Those two really made this movie kind of work on some level (I’ll get to that later). One of the things that I dreaded with this movie was something in the trailer for Captive, it seems to have this incredibly ham fisted religious message. Fortunately in the actual film it doesn’t beat you over the head as much as it seems from the trailer. It’s a small aspect of the film, it doesn’t really work within the film but its distracting at worst. Honestly there’s not much to say about the story itself except that its not that interesting but Mara and Oyelowo made it somewhat work.

Kate Mara and David Oyelowo are both great and their performances were the best parts of the movie. They share great chemistry and the interactions with them were the highlights of the film. Kate’s character Ashley is recovering from a drug addiction and while that is often a cliché in a lot of movies, Mara portrayed that very well and made it feel real, I’d probably say that this is one of her best performances. There is a bit of an arc with Ashley recovering from drug addiction and attempting to meet her daughter the same day that she comes into contact with Oyelowo’s character, and while this arc isn’t great, it’s done decently enough. David Oyelowo is really good as well, he’s both incredibly intimidating but also has a human side which Oyelowo effectively conveys. I’m glad that David brought that out because to be quite honest, the redemption arc for his character Brian… wasn’t very good. We are supposed to get the feeling that Brian is changing, but I just didn’t get that. It is so messily done and they don’t clearly convey why he makes certain decisions and goes through certain changes, it feels like the people working on the film couldn’t themselves figure out why he did what he did and so they just didn’t give him reasons. That’s not necessarily on David though, he does a good job with what he has, he’s actually more effective at giving his character humanity than the writers and the director. The supporting cast are also good, with actors like Michael K. Williams involved but its Mara and Oyelowo who are the stand outs.

The direction by Jerry Jameson is fine, there’s not really a whole lot to say about it. Most of the time it feels like a TV movie, its so basic and simple and there’s not much to it. With that said, whenever the film is supposed to be tense, especially during the early scenes with Mara and Oyelowo inside Ashley’s house, it is very effective. It makes you feel claustrophobic and tense as to what Oyelowo’s character might do next.

Captive is not that great of a movie, it just manages to reach the level of passability. Mara and Oyelowo were for me the stand out parts of the movie and prevent this movie from sinking into mediocrity, aside from that, there’s not much reason to check it out. The direction is mostly simple (aside from some admittedly well done tense scenes), the emotion that the movie is going for doesn’t land, the story is average and not always investing, the character arcs aren’t always done effectively, it’s got a lot of problems. If you are curious I suggest checking it out for yourself, but outside the performances, don’t expect anything great.