Spotlights the true story of Leroy Logan (John Boyega), who at a young age saw his father (Steve Toussaint) assaulted by two policemen, motivating him to join the Metropolitan Police and change their racist attitudes from within. Part of Steve McQueen’s Small Axe series of films.

I have been watching the Small Axe movies, all directed by Steve McQueen. I really liked Mangrove but was a little mixed on Lover’s Rock. I was interested to continue on with the third movie: Red, White and Blue. I knew that it was about John Boyega in a biopic in the role of a real life police officer and that’s it. It was really good and so far one of the stronger movies in the Small Axe anthology. 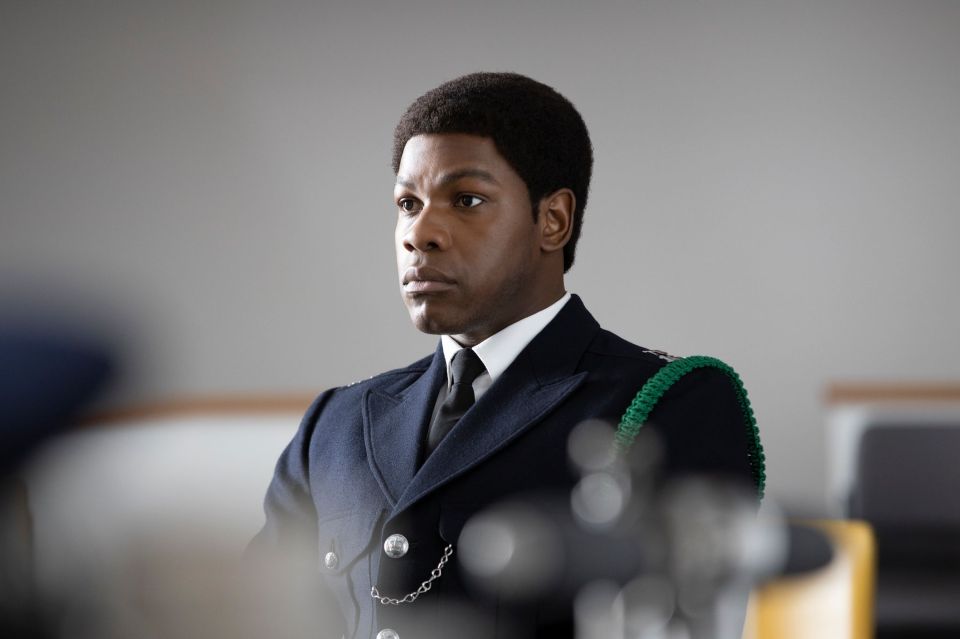 Red, White and Blue is more straightforward and lowkey compared to the previous two Small Axe movies. It also takes a distinctly different approach compared to those other stories, this time following the perspective of a police officer. Red, White and Blue is not only an examination of police culture and institutional racism, it’s also an uncomfortably timely look at how trying to reform a broken system that’s uninterested in change is futile. When the lead character of Leroy chooses to be a police officer, the community turns against him, and even his fellow police officers don’t afford him the same respect and treatment because of his race. It is frustrating to watch at times, but in the way that it is meaning to. Of the first three movies it does have the best character work. It does very well at conveying this internal conflict following the lead character, while setting it against a larger systemic backdrop. In terms of issues, it does feel like it’s glossing over some important information. There’s a lot of potential in the story of a black man trying to change a racist police force from the inside, but the outcome is a little too straightforward. It has a short runtime at just 80 minutes long. It does end a little abruptly and I wanted it to be longer. I think it would’ve benefited from at least another 20-30 minutes to flesh out some relationships and arcs better. With all that being said, I feel like the moment where it ends the story was a deliberate choice, leaving it at a low point with the hopelessness of the situation, and I do appreciate that. A standard biopic would probably continue onwards to show how Leroy would go on and make a lot of change and now everything is alright (which it isn’t). We don’t get closure because there is no closure given, there is no reformation whatsoever.

The acting is great all round. John Boyega is in the lead role as police officer Leroy Logan, and this is the best work I’ve seen him deliver. Compared to the previous two Small Axe movies where they are ensemble pieces, all the weight is put on the lead to carry this story and Boyega more than delivers. Another noteworthy performer is that of Steve Toussaint as Leroy’s father, a victim of police brutality who is opposed to his son’s decision to become a police officer. The strained relationship between the father and son is given a lot of layers and depth as the film progresses.

Like with the other two Small Axe films, Red White and Blue is on a TV budget but is nonetheless elevated by the direction from Steve McQueen. There is less emphasis on style, it’s about on the script and as such the film definitely has the same tone and feel as the other Small Axe movies. With all that said, it does make itself somewhat different from the past two movies, straying from the striking colour pallets of Lovers Rock and instead having a more restrained atmosphere. It may not be one of McQueen’s best efforts on a technical level, but it still results on a greater focus on the character driven narrative.

Red, White and Blue is a great movie that’s well worth checking out. It’s a well crafted and timely biopic with an incredibly meaningful story, led by a strong (and career best) lead performance from John Boyega.