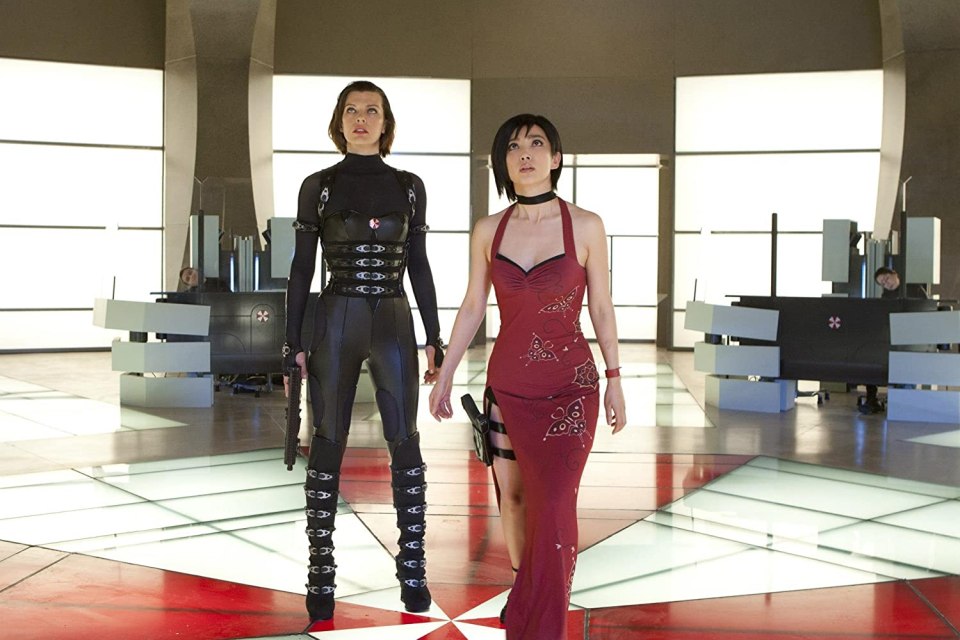 The Umbrella Corporation’s deadly T-virus continues to ravage the Earth, transforming the global population into legions of the flesh eating Undead. The human race’s last and only hope, Alice (Milla Jovovich) awakens in the heart of Umbrella’s most clandestine operations facility and unveils more of her mysterious past as she delves further into the complex.

The Resident Evil movies aren’t particularly good, but I can’t deny that I find them quite entertaining. With the exception of Apocalypse which I found straight up bad, the other movies in the series are silly, very much not representative of the games they are based on, but yet work as some mindless fun. With original Resident Evil director Paul W.S. Anderson’s returning to direct Afterlife, I found it that movie to be fun, but also felt a little underwhelmed at the same time. However, his work on Resident Evil: Retribution was much more of what I was looking for, and was probably the peak of the movie series. 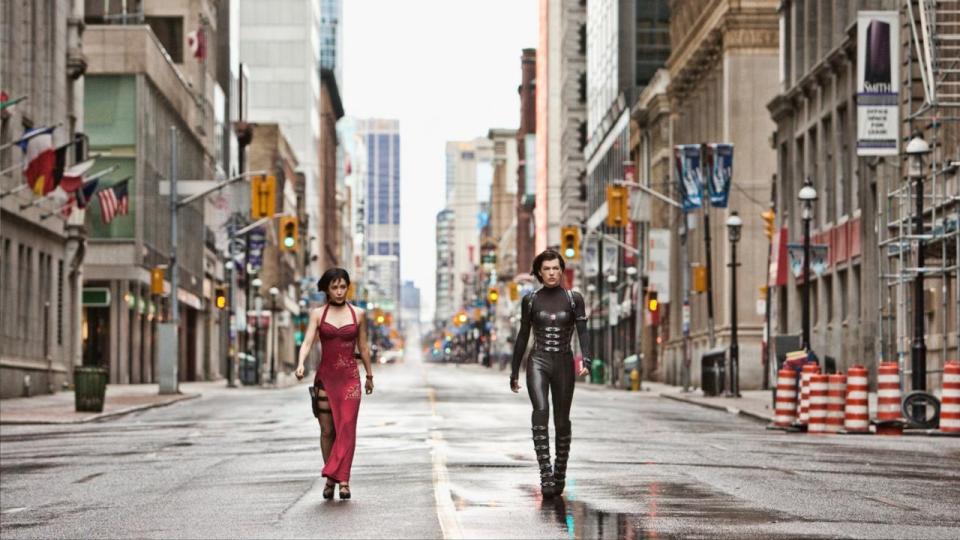 The opening was admittedly a bit awkward. The credits sequence was a great start with a tracking shot reversed of an attack taking place after the end of Afterlife. Immediately after that however, it just cuts to Alice (Milla Jovovich) giving a recap of the previous movies, and it was just done kind of poorly done. Now Alice narrating what happened in the previous movies at the beginning of the next one isn’t uncommon, but the way they presented it here just looks really silly and out of place for the movie, as if it’s some teaser clip intended to be released online rather than put in the actual film. Without getting too into it, up to a certain point, much of the opening is a little jarring and you don’t really know what’s happening. After that point however, it started to really work for me. I actually didn’t know what to expect from Retribution really. While all the movies are very similar, I wasn’t sure about the plot or the setting, and so it was quite the surprise when I did watch it. I think the reason why this movie works so well compared to much of the other movies in the series is that it’s so silly that it actually seems self aware. So whenever an incredibly silly or goofy moment happens, it doesn’t come across as bad, as it actually enhances the experience and just makes the experience more fun in a B movie way. This is probably the first movie in the series that understands what kind of a series they are, and completely embraces it. If you’re a die hard Resident Evil game fan who doesn’t like what the movies have done, this won’t win you over. I’m not even sure that I can say that zombies take up more than half of the antagonists that the main characters are fighting against in this movie. As someone who only played one of the games, like with the other movies, there are some characters and references to the game series that you might enjoy seeing. 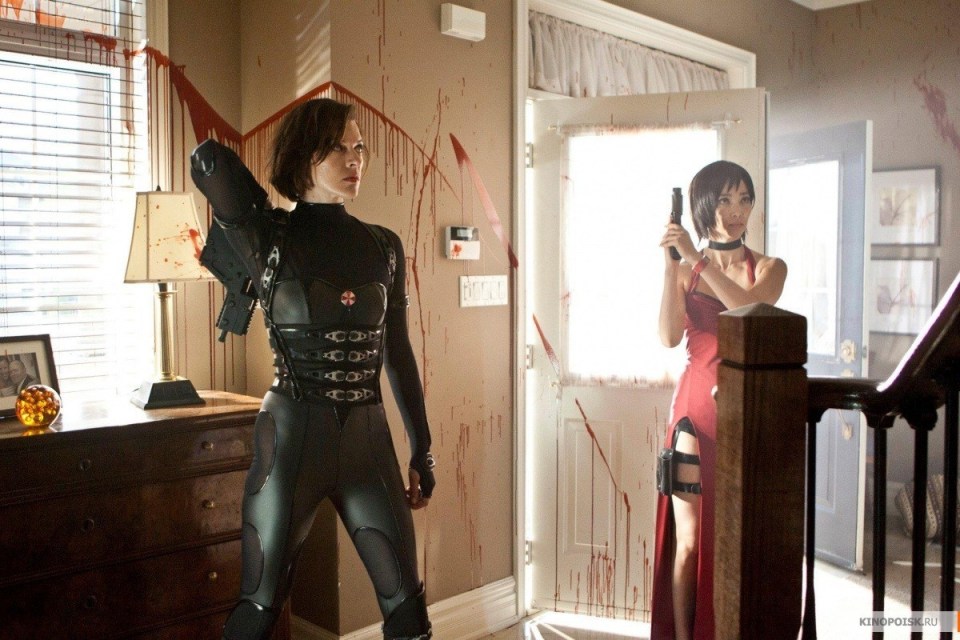 The acting is pretty much at the level of the other Resident Evil movies, that is to say generally fine and occasionally bad. Milla Jovovich is once again reliable as lead character Alice, there’s not a whole lot of progression with her character in the series, and Retribution doesn’t change anything either, but Jovovich is effective enough and makes the character work well enough. You also get returns of characters from previous movies played by Sienna Guillory and Michelle Rodriguez, and they are decent in their roles. The rest of the acting is just fine but nothing that good either. Even the appearances of known Resident Evil characters weren’t that impressive, with Leon Kennedy, Barry Burton and Ada Wong being included. Li Bingbing was relatively decent as Wong, but the other two characters really could’ve been swapped out for anyone.

Paul W.S. Anderson directs his third Resident Evil movie here, and it works a lot better than what he was trying to do with Afterlife. Like with Afterlife, he decided to film the movie in 3D and if you are nowadays going to watch this movie not in 3D, a lot of the moments have objects flying at the camera and look really goofy and forced. However visually the movie actually looks pretty good, and makes it an enjoyable action flick to watch. By now you must know that this is an action series at this point, and thankfully it absolutely delivers on that aspect here. Whether it be with zombies or other humans, the fight choreography and stunts are quite good, and what’s even better is that the movie actually allows you to see what’s going on and not burying it in obnoxious cuts to hide poor stunts. It also doesn’t fall into the problem that Afterlife had, where it brought out the big guns for the opening scene and the rest of the action scenes not really living up to that moment. Retribution however is consistently entertaining from beginning to end. Like in Afterlife, there is quite a lot of slow motion used, but thankfully Anderson pulled back on a lot of it so it’s not nearly as goofy. A lot of the CGI in the previous movies haven’t aged particularly well, however I think Retribution has good enough effects. Tomandandy once again returns to provide the score after Afterlife, and it is quite effective, mainly in the action scenes. 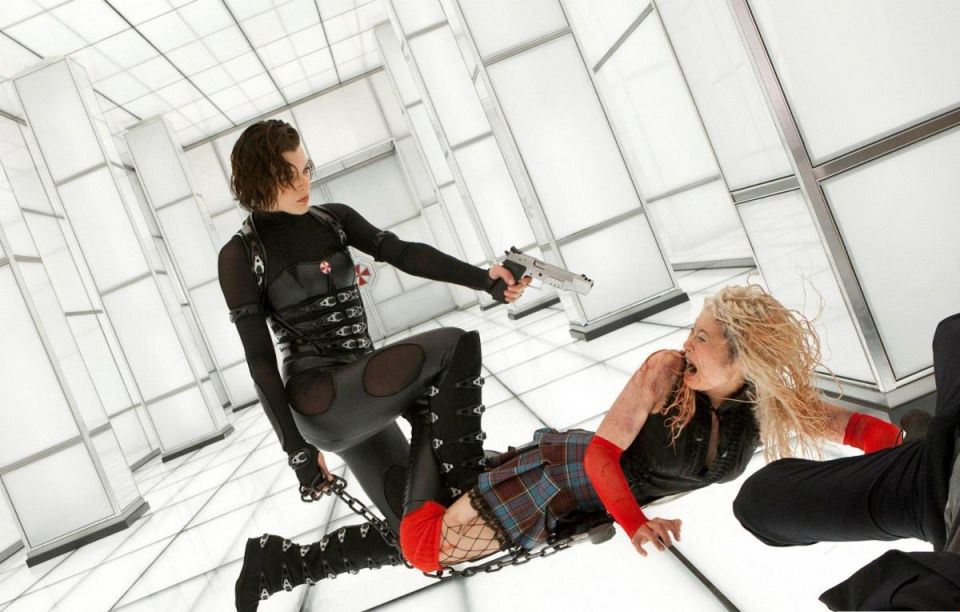 Resident Evil: Retribution edges Extinction out for best movie of the live action movie series. It strikes the right balance of being entertaining and silly, yet is well made as a B level action movie that makes it genuinely entertaining and not just something to laugh at. If you enjoyed any of the previous Resident Evil movies then I recommend trying this one too, I enjoyed it a lot more than I thought I would. 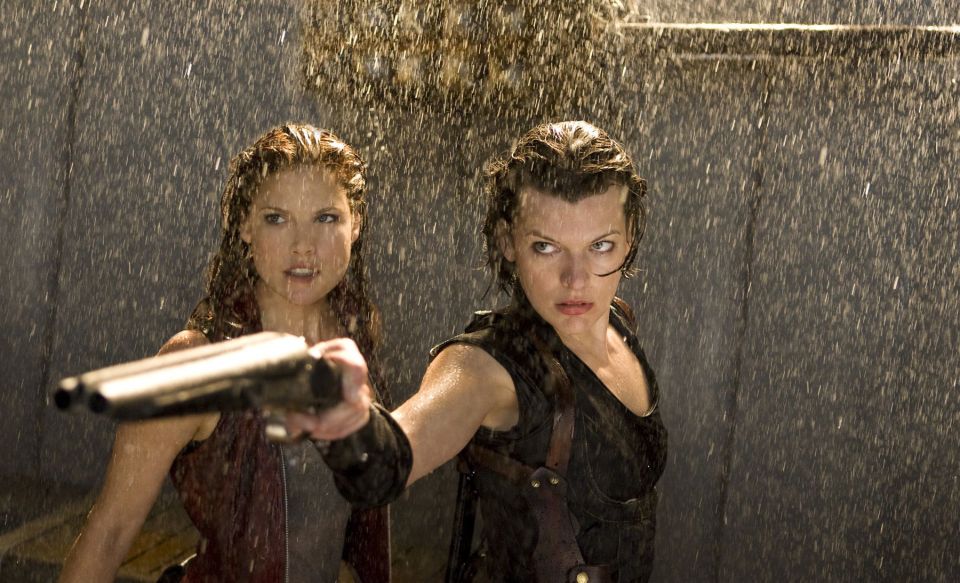 In a world overrun with the walking dead, Alice (Milla Jovovich) continues her battle against Umbrella Corp., rounding up survivors along the way. Joined by an old friend, Alice and her group set out for a rumored safe haven in Los Angeles. Instead of sanctuary, they find the city overrun with zombies, and a trap about to spring.

After three Resident Evil movies, the director of the first movie Paul W.S. Anderson returns to the series to deliver on the fourth entry. While Afterlife is enjoyable, with some generally good action, it’s certainly the least interesting of the series. It comes with the expected flaws, and there’s not really much of a plot. With that said, I still enjoyed Afterlife quite a bit for what it is.

There’s really nothing to say about the plot, even less so than the previous movies. It’s actually a pretty straightforward movie, and it really just feels like a bunch of action scenes connected by a thinly drawn plot. While I get that many of the other movies are like that too, they did a much better job at hiding it than here. The horror aspect was most present in the first Resident Evil movie, the other movies following that had less horror, but it was still a noticeable part of the movies. With Afterlife however, the horror aspect was sort of in the background, it is first and foremost an action movie, that happens to have some horror in it.

Milla Jovovich returns in her role of Alice, and once again does pretty well, especially in the action. Ali Larter also returns as Claire Redfield and is also pretty good. Those two are the highlights of the cast, the rest range from bad to being fine. Wentworth Miller is also included in this movie as Chris Redfield, and he was alright. Albert Wesker has been recast from Extinction (the previous Resient Evil movie), this time being played by Shawn Roberts, and he gets more presence and screentime in the movie as the main antagonist this time round. Now again I hadn’t played the Resident Evil games that have him in them, but from the vague knowledge I have of him, he’s blonde guy with sunglasses who has superpowers, is like super enhanced and can fight very well. That’s pretty much how he is in this movie, and nothing more, a pretty generic, if passable villain.

This is Paul W.S. Anderson’s return to the Resident Evil movie series since the first movie, and while I wouldn’t quite say it’s a triumphant return, he still does some good things with his direction. Visually, this movie actually looks really good. The opening credits scene starts off the movie on a very high note, and even the first action sequence is pretty enjoyable to watch. The Resident Evil movies ever since Apocalypse have been action based, but they really made a big lean on the action in this movie. The first action scene starts off with a bunch of Milla Jovovich clones, as I said, it is very entertaining, but I think that’s where the movie might’ve peaked. There are also a lot of slow motion in the action, and while that could be fun to watch at points, it could get a little cartoonish and silly. There’s particularly a scene involving a big undead person with a giant axe, which while it was stunning to look at, bordered on parody with the amount of slow motion used, as without it the scene would’ve been only like a minute long. This movie was definitely filmed in 3D, with all the things flying at the camera, but it’s not the worst case of that type of movie I’ve seen. The CGI is pretty average, hasn’t aged well from 2010. Tomandandy provides the score, and it certainly made the movie much better, especially when it came to the action scenes.

Resident Evil Afterlife isn’t one of the better movies in the series but isn’t the worst either. It’s essentially a bunch of action scenes strung together by a vague plot. It has some enjoyable aspects to it for sure, a couple of the actors are good, and many of the action scenes are entertaining and stunning to watch, even if they’re a little too over the top for their own good. If you don’t like the other Resident Evil movies, you definitely won’t like this one. But if you made it this far in the series, you might as well check out Afterlife too.