Without the guidance and protection of their professors, Harry (Daniel Radcliffe), Ron (Rupert Grint) and Hermione (Emma Watson) begin a mission to destroy the Horcruxes, the sources of Voldemort’s immortality. Though they must rely on one another more than ever, dark forces threaten to tear them apart. Voldemort’s Death Eaters have seized control of the Ministry of Magic and Hogwarts, and they are searching for Harry — even as he and his friends prepare for the ultimate showdown.

I’m aware that Deathly Hallows Part 1 gets a bit of a bad rap but I’m not really sure why. Maybe it’s because it’s a part 1 of a story, and is really seen as just setup for the second half. However this might be one of the best films in the long running series. Director David Yates once again does a great job, he takes advantage of having the story in two parts, utilising it well, adding some character development to the main characters. It does drag a bit especially in the second act but most of it really works.

The movie is quite dark, definitely the darkest of the movie series (though it doesn’t have as many depressing moments like in Half-Blood Prince) and you really feel the stakes throughout. There are little spots of brightness, just enough so that the movie isn’t overwhelmingly dark but not too much that you forget what’s at stake in the wizarding world. Splitting the books up into two really was a wise decision, it’s not the longest book in the series but it is a very big story and a whole lot happens, and so the more screentime given to the story, the better. It also allows David Yates and everyone else working on the movie to take their time with telling the story, you couldn’t do the entire Deathly Hallows book in one 4 hour long movie, and if one was to do that it wouldn’t be as good as what they have done here. Splitting the movie into two parts also gives more time to these characters and we get to know them a lot more and see them go through a lot of change. Deathly Hallows Part 1 really does feel like a Part 1 of a story and a setup for a big climax, however it’s not like other YA movies that have their last book split into two parts, it doesn’t feel like it’s padding out time. Yes, the second act does drag a little bit, especially when they are in the forest and not really doing anything, but it doesn’t drag too much, and as I said these moments are often used for character moments. The third act is done really well, very dark and tense and ending it on a pretty good note that sets it up for the last instalment in the franchise. Again, book changes are apparent, most of them don’t bother me. The movie does a good job at simplifying some of the things that happen and cutting out some of the unnecessary bits. With that said, Deathly Hallows Part 1 does have the singularly most obnoxious book to movie change, it’s to do with how Wormtail (Timothy Spall) is dealt with at the end, if you’ve read the books you know exactly what I’m talking about. Had they changed it to how the book did it, it would’ve taken up a minute at most and would’ve been a very dark and impactful scene. However they instead used that moment as a joke. It’s not movie-breaking but it’s nonetheless really irksome. Also a tad glaring is a bit involving a mirror, in the books its established in Order of the Phoenix, but here in the movie it just comes out of nowhere with no explanation for what it is and how it got there.

The acting once again was great. The dynamic between Harry, Ron and Hermione (Daniel Radcliffe, Rupert Grint and Emma Watson) was great and they give some of the best performances of their characters in the series. Since the movie is just them focussing on hunting down the Horcruxes we get to see them very prominently throughout the movie; we see them come together and get into conflicts as they struggle to complete this seemingly impossible task. A lot of the side characters are pushed to the background (because of how many they are and the fact that most of the movie is just focussed on the main 3) but they all do great, whether that be Jason Isaacs as Lucius Malfoy, Alan Rickman as Severus Snape, David Thewlis as Remus Lupin, Helena Bonham Carter as Bellatrix Lestrange or Tom Felton as Draco Malfoy. One casting decision which wasn’t that great was Rhys Ifans as Xenophilius Lovegood. Ifans is a good actor but he feels a little too over the top, even if he’s only in a couple scenes. Also while it’s a decent casting decision, Bill Nighy as Rufus Scrimgeour (the new Minister of Magic) is really only in a couple scenes here (having about the same screentime as in the book). He was introduced in the Half-Blood Prince book and they should have done the same as with the movie (this is more of a criticism with Half Blood Prince than Deathly Hallows Part 1. 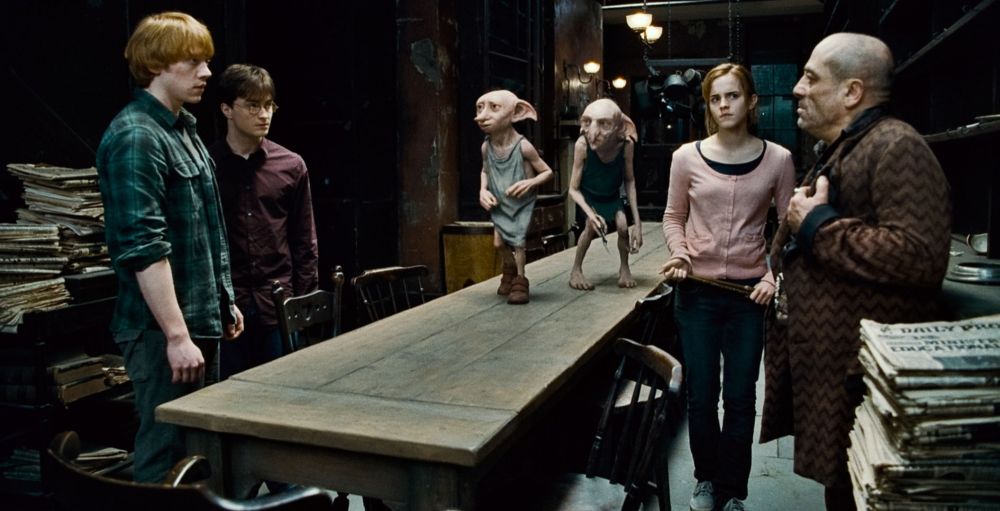 Direction by David Yates really works once again for the Harry Potter movies. The cinematography is a little brighter than in Half-Blood Prince so you can actually easily see anything, however is dark enough that it fits with the tone of the story. The production design, CGI and other technical aspects are greatly handled as well. There is a storytelling scene close to the third act that is done really well with the visual style and animation. One scene that had some issues with its direction was a chase scene in the forest scene, it was really shaky and it was hard to see what was going on. I know I brought it up in other Harry Potter reviews but it is absolutely jarring how different the time period is, because some of the locations are rather modern looking at times. Not a huge problem but definitely something that stands out. The score for the movie is done by Alexandre Desplat this time and it was truly fantastic, adding a lot to the movie.

I actually really liked Harry Potter and the Deathly Hallows Part 1, it’s a lot better than I remember it being. It is quite bleak at times, and drags in some moments but ultimately it does achieve what it sets out to do, and makes for one of the best movies in the Harry Potter series. The story being in two parts may not be something that a lot of people like, but I think that overall ended up improving the films.