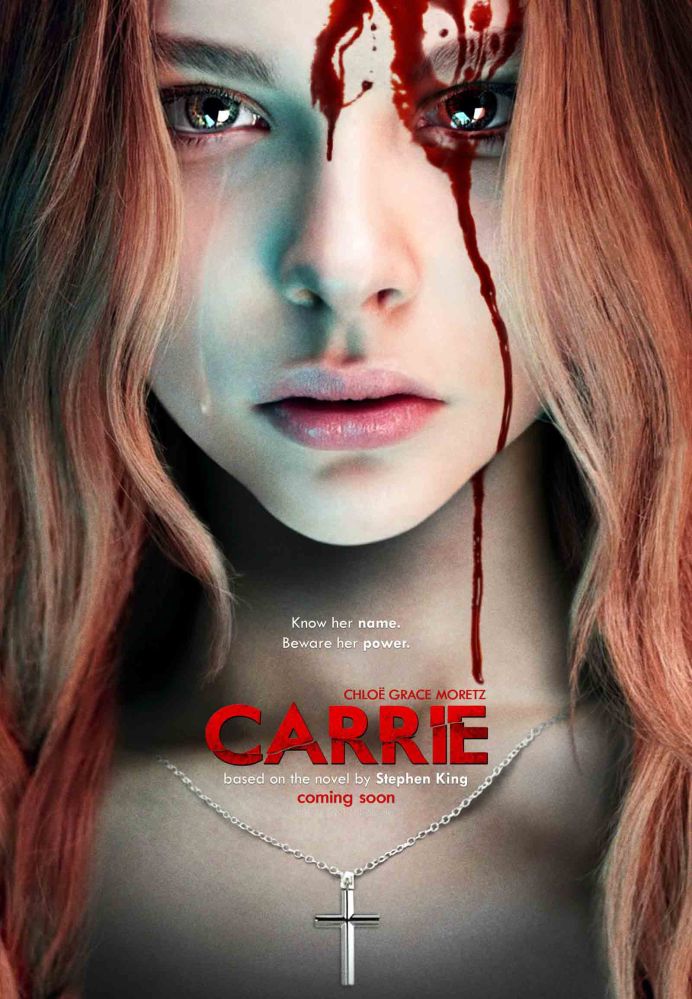 High school can be tough for many teenagers, but for Carrie White (Chloë Grace Moretz), it’s especially hellish. A shy and awkward teen being raised by a religious zealot (Julianne Moore), Carrie is frequently the target of bullies. But Carrie has a secret talent: She can make things move with her mind. One fateful night, an especially cruel prank at her senior prom pushes her over the edge, and Carrie unleashes her telekinetic powers on all who get in her way.

If you’ve read my review on the 1976 Carrie, you know that I wasn’t a big fan of it. Everything seemed dated so I was interested in what they were going to do with the remake. People seem to find this 2013 film to be a bad remake. Although I don’t think it’s that far off from the original, I will say that it is bad remake in that it’s pretty much the same movie. It barely improves much over the original and was pretty much pointless being created. If you watched the original movie then there’s no reason to watch the remake. Pretty much everything is the same, all the plot points are the same and everything is going in the same direction with barely any changes. Another thing to note is that the plot moves a lot faster, I don’t really know how to feel about it. On one hand the plot is moving faster than the original so I’m not as bored but on the other, it feels watered down and empty. The plot for me is as flawed as the original film.

Chloe Grace Moretz did a pretty good job as Carrie, however I felt that she didn’t feel socially awkward enough. She seemed a little shy but that was it, Sissy Spacek managed to actually make Carrie different from others around her. I think it’s more likely the fault of the direction than her performance however. The best part of this movie is Julianne Moore, who did much better as the mother over the original. Piper Laurie’s performance was very over the top and at times laughable. Moore however actually gives a pretty scary performance and the film also handled her much better. The bullies are as one dimensional as they were in the original, however they are somehow worse. That’s probably because the film felt very Hollywoodized, which probably led to these cliché bullies which are somehow lazier put together.

This film definitely uses CGI more and when it is used for Carrie’s powers, there’s no subtlety whatsoever. The greatest disappointment for me is the prom scene. In this version there were too many special effects, it was over the top and it doesn’t feel the slightest bit threatening. The 1976 original had Carrie’s powers seem a little scary because of the subtlety used. Here, Carrie just seems like one of the X Men and there is no subtlety. It doesn’t help that some of the deaths were very Final Destination esque.

I’m not going to act like the original Carrie is a masterpiece, just look at my review of it. However this remake commits probably the worst sin that a remake can commit, not have a lot of changes or improvements over the original. A lot of the elements are fine like Chloe Grace Moretz was decent and Julianne Moore was great in her role but other than that this remake feels completely pointless. It doesn’t improve on the flaws of the original, and aside from 1 or 2 good things, the film just generally feels mediocre. I feel like the story of Carrie isn’t a book that can be adapted that well, even though I liked the book I don’t think it makes good movie material. Overall this remake isn’t bad but it was a little forgettable.