When, by executive decree, all the canine pets of Megasaki City are exiled to a vast garbage-dump called Trash Island, 12-year-old Atari sets off alone in a miniature Junior-Turbo Prop and flies across the river in search of his bodyguard-dog, Spots. There, with the assistance of a pack of newly-found mongrel friends, he begins an epic journey that will decide the fate and future of the entire Prefecture.

I was looking forward to Isle of Dogs, it was one of my most anticipated films of 2018. For whatever reason, I’ve been having to wait for this film to release here when it was already released a couple months prior everywhere else, however it’s finally here. I’ve seen a few films from Wes Anderson (Grand Budapest Hotel, Fantastic Mr Fox and Moonrise Kingdom) and I liked what I’ve seen from him. With this being the second time he stop motion animated a movie (with the first being Fantastic Mr Fox), I was confident that this would be a solid movie, and that it was. It was pretty much what I expected and maybe a little bit more. Isle of Dogs is an hour and 40 minutes long and from start to finish I was entertained. You can tell that it is definitely a Wes Anderson story. It has a very unique and original story with quirky characters, deadpan humour which is really funny and unique and is just entertaining overall. I didn’t really have too many faults with it, though there might’ve been a slight overuse of flashbacks, which does halt the story at times. Also some places and characters that the film at times cuts to (AKA characters that aren’t the main characters) really weren’t as interesting as the main storyline/characters. Isle of Dogs is kind of a kids movie, though it does go a little unexpectedly dark at times, so if you have some kids thinking that they’re going in expecting a cute film about a bunch of talking dogs, let’s just say that it won’t be what they are expecting. Aside from some minor faults, Isle of Dogs has a pretty solid story. 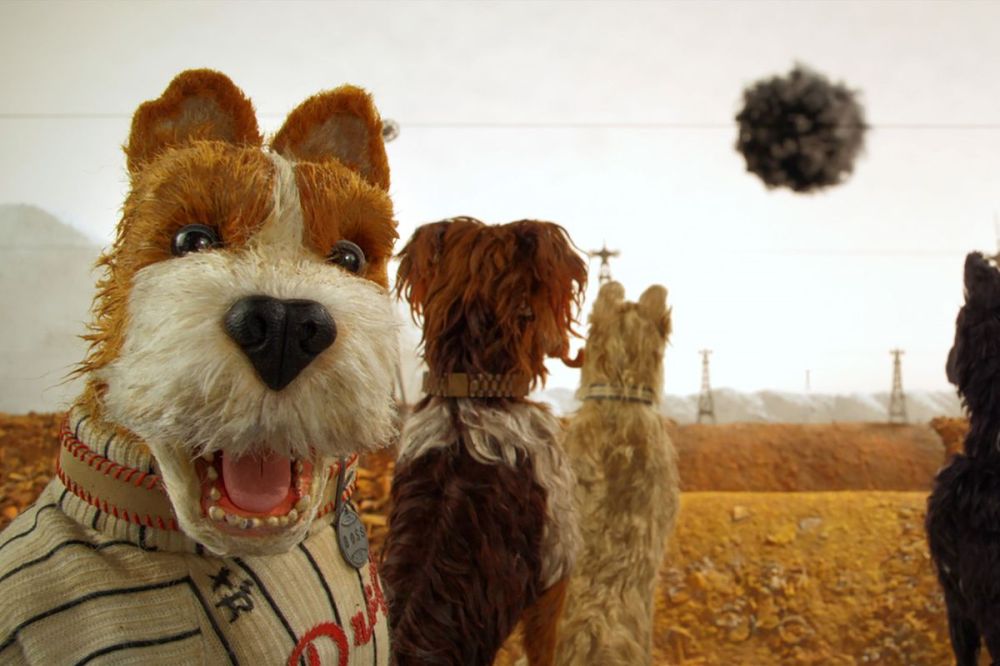 There is a lot of voice actors involved (Wes Anderson always seems to have a large and talented cast in his films). Bryan Cranston, Edward Norton, Bill Murray, Jeff Goldblum, Greta Gerwig, Frances McDormand, Liev Schreiber and much more consist of the voice cast, and they all did good jobs as their characters, with Cranston being a particular standout.

As I said, this is the second time that Wes Anderson has directed a stop motion animated movie and once again he did a great job. Fantastic Mr Fox was good, but his handling of stop motion animation was even better here with Isle of Dogs, it is a great looking film. Also on top of the movie feeling like a Wes Anderson written movie, it also feels like a Wes Anderson directed movie. Everything from the framing, camera position, editing, everything here really feels like his film. Now if you’re not familiar with Wes Anderson’s style in his films, you probably have no idea what I’m talking about. It’s really difficult to describe because you can’t compare his movies to anyone else’s. If you haven’t seen any of his movies before, I do recommend giving this a go. If you can’t get into Wes Anderson’s other movies because of his style, chances are Isle of Dogs won’t win you over. There was an interesting decision made, all the dialogue from the dogs are in English, however most of the dialogue by the humans are in Japanese, and a significant amount of it isn’t translated into English. It works most of the time to show the language barrier, but I only say that it works most of the time because often times someone else has to translate what they are saying in English because some of the dialogue contains plot details that we the audience need to know. The film tries to have a mix of untranslated dialogue that we don’t hear (and yet convey the message visually so we still understand what’s going on) while having English exposition explaining everything to us and it didn’t quite work as well as I think it was intended to. I think it would’ve been better sticking with one way, whether that be all human dialogue in Japanese, Japanese dialogue with subtitles or all the dialogue in English, because it felt jarring when they kept changing their method of human dialogue. It’s not a major flaw with the movie, just something that stands out that is worth addressing.

On the whole, Isle of Dogs really worked well. It was entertaining, I could get invested in the story and I just enjoyed watching it from start to finish. If you’re a Wes Anderson fan, I think you’ll definitely dig this. If you haven’t seen any of his movies before, I’d say that Isle of Dogs is a good place to start with his movies. His films may not appeal to everyone but I recommend giving it a go at the very least.