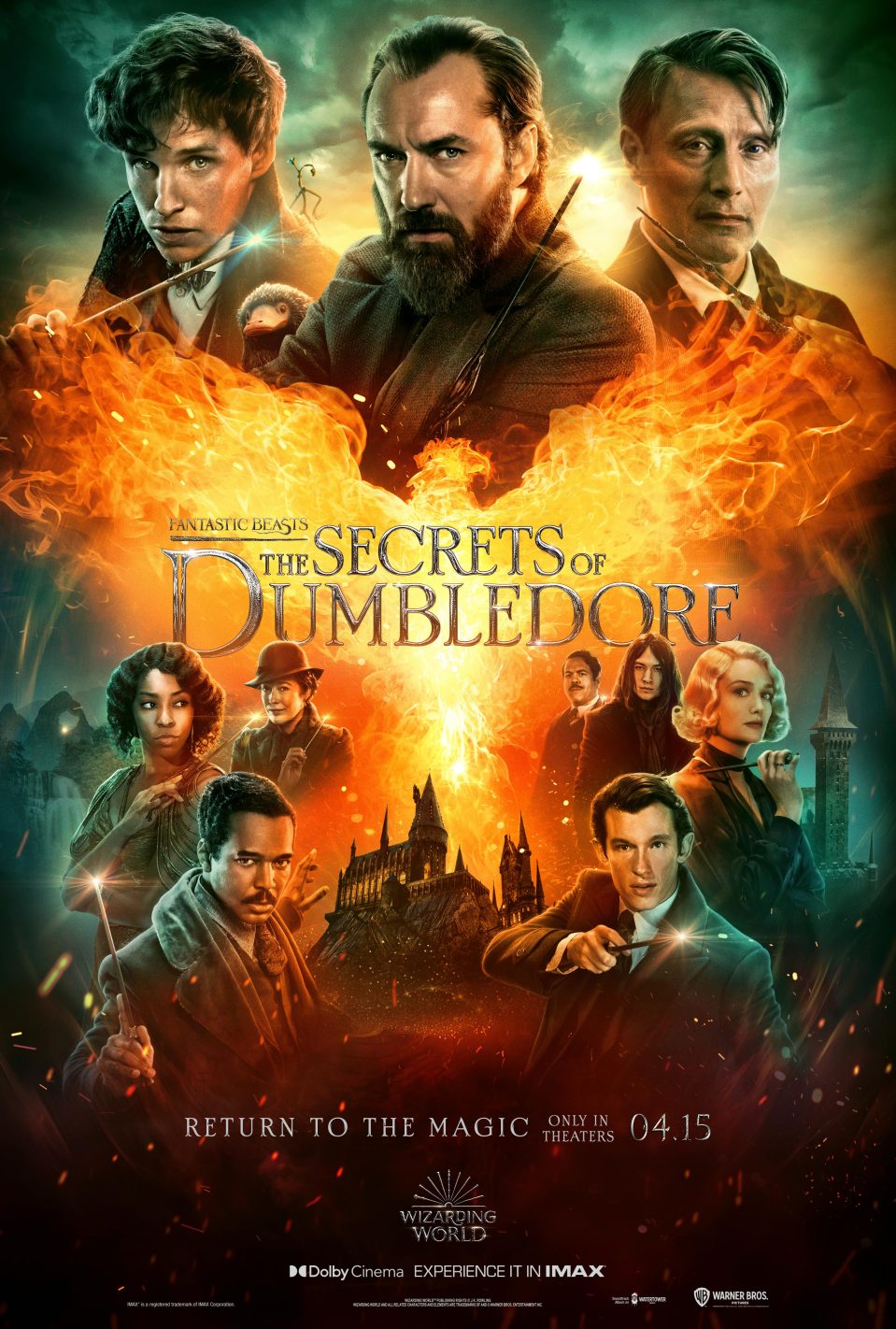 Professor Albus Dumbledore knows the powerful, dark wizard Gellert Grindelwald is moving to seize control of the wizarding world. Unable to stop him alone, he entrusts magizoologist Newt Scamander to lead an intrepid team of wizards and witches. They soon encounter an array of old and new beasts as they clash with Grindelwald’s growing legion of followers.

I admit I wasn’t the most looking forward to the new Fantastic Beasts movie. The spinoff Harry Potter series has been very divisive to say the least. I thought that the first Fantastic Beasts movie (Fantastic Beasts and Where to Find Them) was decent but definitely flawed and could’ve been more. I even liked the follow up The Crimes of Grindelwald when I saw it, but it soured upon further thought. It was way too messy, and I pretty much lost confident in whatever JK Rowling was planning to do with this series. And without getting too deep into it, Rowling herself has been making it difficult to look forward to anything she creates and releases outside of the Fantastic Beasts movies. So outside of the addition of Mads Mikkelsen, I really wasn’t that looking forward to the third movie in the series. The Secrets of Dumbledore definitely has its problems, but for what its worth, I liked it.

The first two movies were solely written by JK Rowling and while the script of the first movie was okay, the second was a mess. One thing that elevated my hopes for the third movie was the addition of Steve Kloves as a co-writer alongside Rowling. He was involved with adapting most of the Harry Potter books into movies and while I can’t say for certain how big of a role he had in the writing process, it must’ve done something because it’s at least an improvement over Crimes of Grindelwald. An issue that CoG had was that the story felt incredibly scattered, with so many plotlines and characters that by the end, they all felt half baked and underdeveloped. To a degree, Secrets of Dumbledore also has that same issue, but it is definitely an improvement here. It helps that many of these characters are together in groups a lot of the time and comparatively less scattered. It was a lot easier to comprehend what was happening and I was interested enough to follow the characters, even if there were some storylines I wasn’t invested in. With that said, there are still too many characters. Some storylines felt downright unnecessary, like with the character of Yousuf Kama. If they incorporated characters or storylines together (or cut them out entirely), it might’ve worked better. Cutting down the storylines would’ve removed the unnecessary and dull scenes too. It also doesn’t help that there’s a lack of stakes; the Grindelwald vs Dumbledore storyline doesn’t have many stakes since we know the outcome already. However, they could’ve added some personal stakes with the rest of the characters, and there’s just not a lot of those here.

Unfortunately, The Secrets of Dumbledore just can’t get away from feeling drawn out. The storyline of this whole series is the very opposite of tight, you just don’t know what it is all leading towards beyond the inevitable final duel between Grindelwald and Dumbledore. There might be some plot and character reveals, but like with Crimes of Grindelwald, I really didn’t get a sense that anything had progressed. Even Harry Potter with its 8 films, it felt like something had happened in each instalment. Each Fantastic Beasts movie feels like build up for the next one. With the storylines in SoD and the way they are resolved (or not resolved) by the end, it feels like the overarching story is being padded out. There are supposedly two more movies coming, and once again I really don’t expect much progress in the next entry. Some of the choices that JK Rowling made with this series are weird, but I’ll focus on probably the most critical one. It’s clear that Rowling wants to have this series focussing on the Grindelwald vs Dumbledore war, but because the first movie was a Fantastic Beasts film, I guess she felt that she had to keep Newt Scamander as the protagonist. However, with every movie he feels less relevant to this storyline and as a result he feels very out of place, and not in a good way. For what its worth though, they do manage to find a way to incorporate magical beasts into the storyline of this movie in a way that makes sense. Secrets of Dumbledore is a long movie at nearly 2.5 hours in length, and you definitely feel it. There were definitely scenes that could’ve been shorter, even full-on sequences which feel like padding. An example is a sequence involving Newt Scamander and crabs, while it is amusing, it is drawn out and really didn’t anything for the movie outside of having an action scene and being longer.

There are some great actors involved in this movie, though only some are utilised well. There are two highlights in the cast for me. The first is Jude Law as younger Albus Dumbledore, returning from Crimes of Grindelwald. In the last movie he was in a supporting role, but here is in a much bigger part. Law is fantastic as Dumbledore and adds so much to his scenes. It’s actually a wonder why Rowling didn’t have this prequel series just follow Dumbledore as the protagonist. The other highlight is that of Gellert Grindelwald, now played by Mads Mikkelsen. The casting of Grindelwald in these movies has certainly been a roller coaster. In the first movie it was Colin Farrell portraying the disguised Grindelwald, then Johnny Depp played the true Grindelwald, and now they’ve recast him with Mikkelsen in this third movie. The recasting was a definite upgrade. Depp’s Grindelwald was really out of place and didn’t fit the character. Mads on the other hand felt more like a character than a caricature, less overtly evil and more alluring and convincingly sinister (which is what Grindelwald should be). It really felt like he should’ve been cast for the part in the first place. He and Law share some very convincing chemistry, it’s fantastic whenever the two of them are on screen interacting with each other. 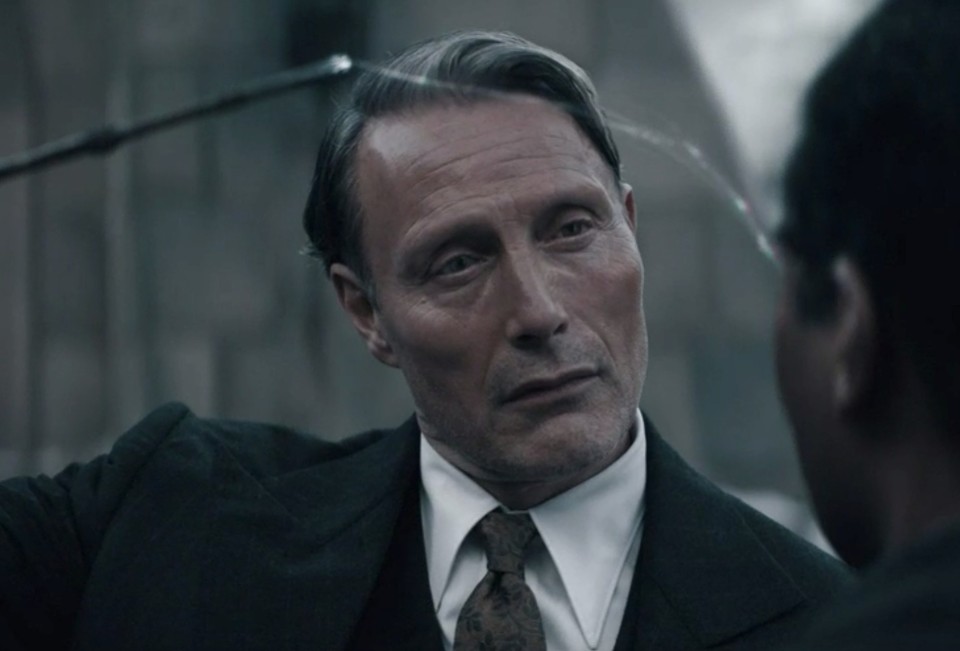 Eddie Redmayne once again returns to the role of Newt Scamander, and he is very well suited for this role, he plays it well. Unfortunately, as I just said earlier, Newt’s inclusion makes less and less sense with every entry. At this point, there’s no reason for him to be the protagonist, and he makes more sense as a supporting player instead. Dan Fogler also returns as Jacob Kowalski and remains likable and enjoyable to watch as before. Jessica Williams is a new addition to the cast, and I really liked her, she brought a lot of energy and humour to her scenes and made her scenes enjoyable to watch.  However, some of the other cast members and characters weren’t handled the best. One notable mishandling was Alison Sudol’s character of Queenie. In a very underdeveloped storyline in the last movie, she joined Grindelwald at the end. All I’ll say is that Queenie’s story in the third movie is half baked and disappointing, especially with how it is resolved. Ezra Miller’s character of Credence is notable throughout the series, now he’s joined up with Grindelwald and going after Albus Dumbledore. This character is definitely meant to be a major part of the movie, however there’s something about the handling of the storyline that it makes it difficult to care about. However the more egregious handling is that of Katherine Waterston’s character Tina Goldstein, who is barely in the film despite being one of the main Fantastic Beasts characters alongside Newt, Jacob and Queenie. There’s definitely an explanation given for her not playing a part in the plot ( “she’s busy”). While it’s one thing to reduce a character’s role down a little (like she was in the last movie), it felt like Waterston had said or done something that caused her role to be minimised to a couple scenes (and I’m 95% sure that’s what happened).

David Yates once again returns to direct another Fantastic Beasts movie. As expected, his work is competent, but you really wish that someone else stepped in to give their own take on a Wizarding World movie, because Yate’s direction and style feels a little stale at this point. For the most part, the visuals are good with some solid cinematography. Most of the VFX are good, especially with the beasts and the magic, and there’s some entertaining action scenes, especially with the wizard duels. The score from James Newton Howard is also quite good and accompanies the movie nicely, even if it occasionally overuses familiar Harry Potter themes at points.

Fantastic Beasts: The Secrets of Dumbledore was better than what I was expecting. I was more invested in the story compared to CoG, there are some entertaining sequences, and the cast are solid, if mostly underutilised, with Jude Law and Mads Mikkelsen really shining in their respective roles. It also avoided some of the issues that the first two movies had. Unfortunately, there is still a fair amount of Fantastic Beasts problems that it can’t escape, like the feeling of being yet another entry building up for the next film in a prolonged series. There are two more movies to come and while I’ll probably end up watching them, I can’t say I’m super excited to see the next one, especially if it’ll just be another set-up film. For what its worth though, if you liked the other two Fantastic Beasts movies then you’ll probably like Secrets of Dumbledore too.