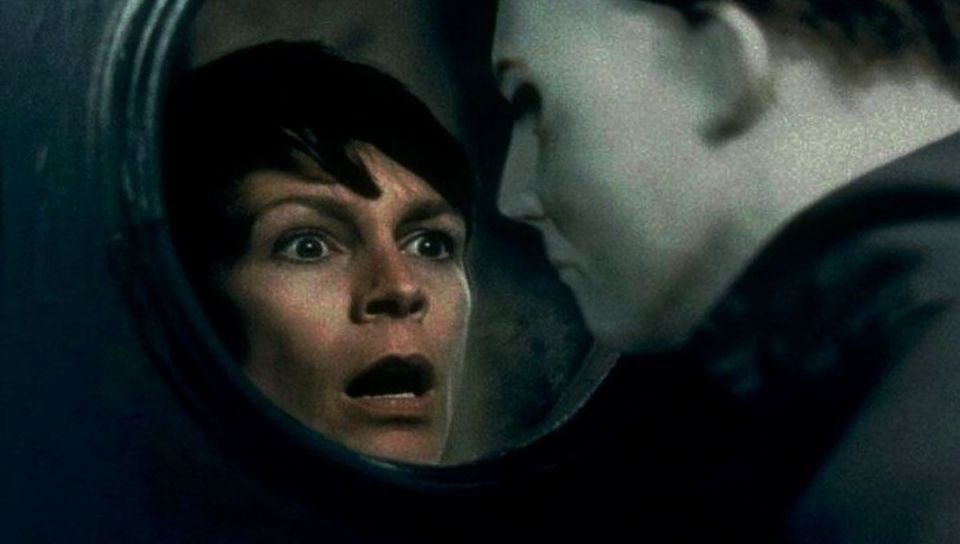 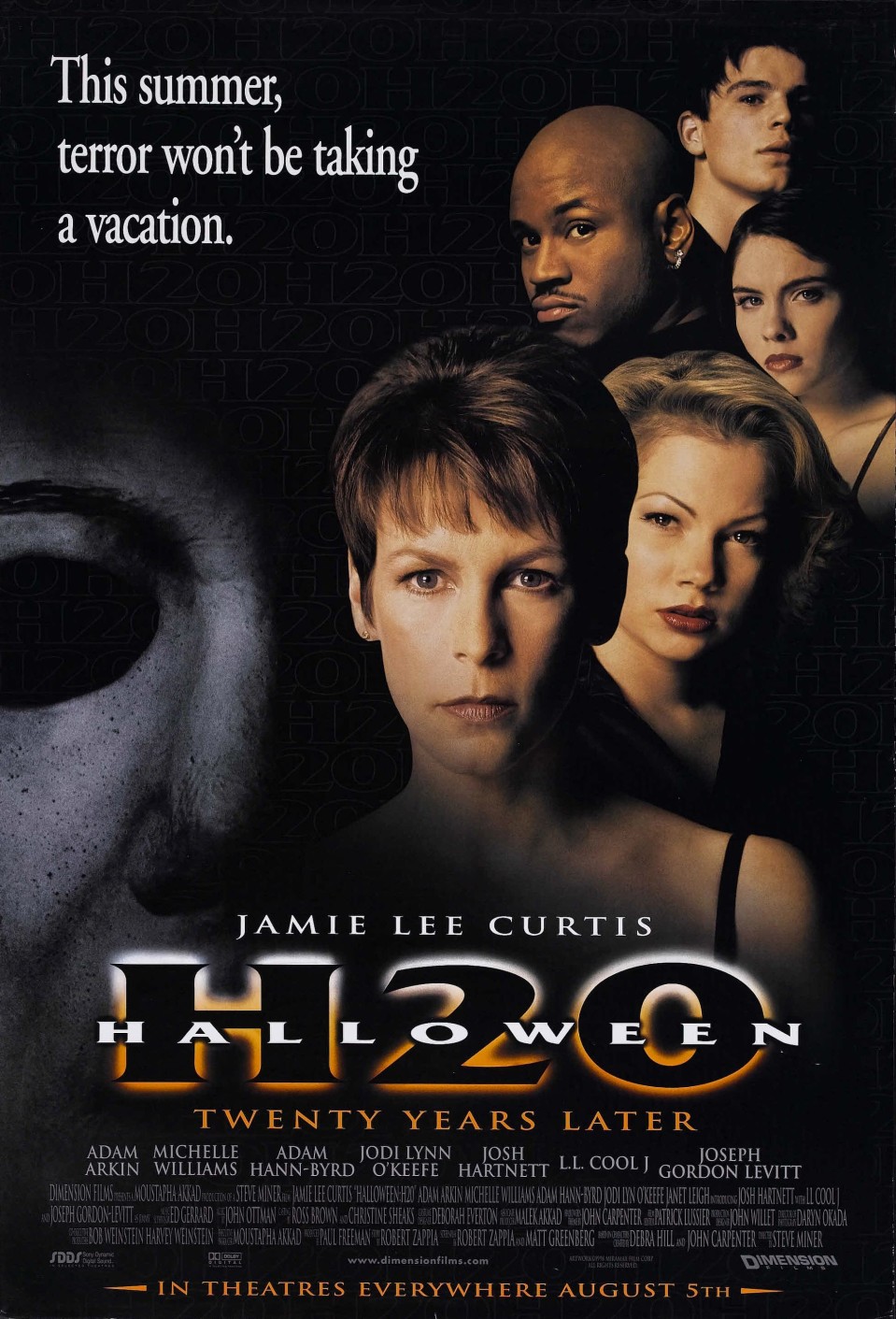 Despite how the original Halloween movie from 1978 is widely regarded as a classic, the reception of the sequels have generally ranged from mixed to negative. With that said, I heard that H20: 20 Years Later is one of the better movies in the series (despite having the worst title of the whole series, and that’s considering that the next entry being called Resurrection). After seeing the 6th Halloween movie, I was definitely interested to see what direction they would take it next. I can say that at the very least, they took it in a different direction, some of it works, some of it really doesn’t.

Something to note is that H20 basically erases Halloween 4-6 and instead follows on from Halloween 2. That means no Cult of Thorn business, so that’s already a plus. Not only that, but they are also bringing back Halloween lead character Laurie Strode, along with actress Jamie Lee Curtis to reprise her role. Both changes are very welcome in this movie. We see how despite 20 years later, the events of the first two movies have still had a long lasting effect on Laurie. H20 explores Laurie’s PTSD from her encounter, and storywise it was probably the strongest aspect of the movie. The movie does open relatively well, reintroducing audiences to Laurie with her new life (she has a son named John), and her trauma. However you notice that the pacing is really slow, especially with the second act. It takes too long to kick off, you’re basically just watching Laurie and other characters interact. The first act is one thing as it is setting the scene for the whole movie, but the second act just focuses on John and his group of friends who have decide to sneak away from a field trip to have a double date at the school. It’s not interesting like the Laurie-centric narratives are, and feels really out of place. In fact, the movie does feels a little loose with its plot, and it really could’ve been much tighter. I actually checked the time, and it’s around an hour into the movie before things actually start getting real and Michael Myers begins doing a lot of killing. Keep in mind that the movie is less than 90 minutes long. With that said, the third act and the overall climax is really the star of the whole movie. It’s very satisfying, and without getting into the ending, would’ve been a great and fitting way to end the series (and then they made another follow up for some reason).

Storywise, H20 does feel like fan service more than an eager or ambitious follow-up, but I guess that’s not a terrible thing. One new change was that it’s the first Halloween movie (at least of the ones featuring Michael Myers) that doesn’t take place in Haddonfield, instead being set in California. Not only does it make sense from a plot perspective (Laurie would logically move out of Haddonfield after what happened), but it also gave the movie a distinct look and feel. The setting for much of the movie is a school campus, and while it does set you at this location well, it’s not really creepy at all. Something to note is that the movie is clearly influenced by Scream, which came out in the mid 90s. Kevin Williamson wrote Scream, and then Miramax had him do a treatment for what would become the H20 script. He only has a producer’s credit, but his fingerprints are all over this. It doesn’t feel like a Halloween movie at all. With that said, considering the last 3 movies felt like they were on repeat, maybe a change in style and approach is what it needed. The end result is a mixed bag, however. It does feel painfully 90s, dating the movie painfully. H20 even feels older than Carpenter’s original film, which was pretty much timeless. There’s humour in it, some of it hits, some of it misses. There are references to the original (they flat out quote the original sometimes), and references to popular horror movies at the time, including Scream. While it does make itself distinct from the other movies, it just doesn’t work all that well. The tension and atmosphere just isn’t there, and even Halloweens 4-6 felt more creepy, even if they were worse movies.

Jamie Lee Curtis returns as Laurie Strode, it’s so great to see her come back in the role that really started off her career. She does some amazing work here, and considering how underserviced and passive the character was in her previous appearance on screen with Halloween 2, it’s nice to see her have such an active role in the third act. She covers a lot of ground as Laurie goes from being an in-hiding over protective mom, to a full blown badass at the end. She really adds a lot of credibility and is easily one of the best parts of the movie. I wouldn’t say the other characters are great, but having more experienced actors on board definitely makes a difference especially when compared to some of the other Halloween sequels, and they had more chemistry together. Josh Hartnett is solid as Laurie’s son John, but is saddled with some bad material throughout most of the movie. With that said, he really works well in his scenes with Jamie Lee Curtis, their dynamic feels real and believable. If they focused more on those two in the movie, I think it would’ve worked better but they have probably 10 minutes of screentime together and John is forgotten for much of the rest of the second half of the film. Michelle Williams is also here in an early role for her, Janet Leigh also makes an appearance, even if it seems to be mainly to be meta with her being Jamie Lee Curtis’s mother, and to make some Psycho references. There’s also an early appearance from a young Joseph Gordon-Levitt in the opening sequence.

H20 is directed by Steve Milner, and you can definitely that he was influenced by Scream on a visual level. The 90s influence also clearly carried over to this movie. On a visual level, it just looked a bit wrong to me. Now I’ve only had glimpses of Dawson’s Creek, but for much of the movie, H20 looks like a horror themed episode of Dawson’s Creek, from the look of the movie to the production design. The movie does well at setting you in this location of a school, especially with the long takes. However, it’s nonetheless just a school, it doesn’t feel creepy, claustrophobic or anything like that. I mentioned earlier that there isn’t much of a tense atmosphere, and again H20 is one of the least scary movies of the entire series. There isn’t much atmosphere at all honestly, with not much tension even in the third act. Michael Myers doesn’t feel very scary, and much of that has to do with the mask, or masks to be precise. There are 4 masks used over the whole filming of the movie (largely with reshoots), including one shot where they used CGI because the real mask wasn’t ready in time for the scene. The only version of the mask I liked in the movie was in the opening sequence where they used the mask from Halloween 6, but it wasn’t used much more because some people thought that audiences would be confused with that mask being from a different Halloween movie. Most of the kills are pretty forgettable except for one in the third act. Speaking of the third act, I did like how much of it was filmed, even if it wasn’t very scary. The score does have some moments but a lot of the time it doesn’t sound anything like a Halloween movie. This time they got John Ottoman to compose. He steered away from the synth heavy aesthetic that Carpenter and Howarth used in the early days of the franchise, and instead went for a fully orchestrated symphonic score that sounded more like Danny Elfman than John Carpenter. It feels very out of place and is among my least favourite scores in the series. It only really works when it actually plays the classic Halloween theme. Also, this movie has a Creed song playing over the end credits. I don’t know why.

Halloween H20: 20 Years Later is a mixed bag of a movie, I think I would’ve liked it more if I saw it in the 90s. It is a movie that should have been way better than it actually is. The script has some missteps, and its new directions aren’t fully fleshed out, some of its influences holds the film back, and other aspects like the score and the mask have issues. With that said, there’s some good in here too. Jamie Lee Curtis is great, I liked the direction they took Laurie, Miner has some solid direction at times, and the third act, especially the ending, was satisfying. If you like any of the Halloween movies, I do think H20 is worth checking out, despite its many issues.