A thriller about a family on a tropical holiday who discover that the secluded beach where they are relaxing for a few hours is somehow causing them to age rapidly reducing their entire lives into a single day.

Old was one of my most anticipated films of the year. I am a fan of M. Night Shyamalan, I know that his movies aren’t for everyone and there are a few of his films which don’t really work for me personally. On the whole though, I like his movies. There was a lot of mystery surrounding Old but I knew it was a thriller about aging set on a beach starring Thomasin McKenzie and Vicky Krieps, and it was directed by Shyamalan, so I was interested in how it turned out. I actually really liked it a lot. 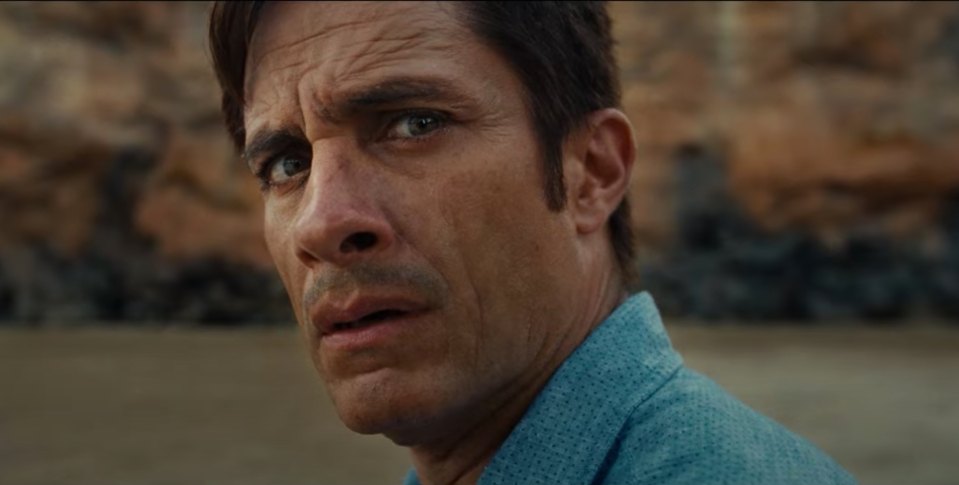 Some have described Old as being Twilight Zone esque and while I’ve never watched the show, I can kind of get what they mean. The plot is fairly straightforward and fairly predicable at times, but has a high concept that they take advantage of, the horror of inescapable aging. The movie is about time as to be expected, with plenty of themes about growing old, experiencing major moments in life in a short time, and effectively is a meditation on time despite being a thriller first and foremost. In most Shyamalan films there is a level of sincerity to how seriously they take the story, and that goes a long way here. The movie is a family drama, and while this dynamic and concept has been in many movies (including horror thrillers), it was handled quite well here. This is one of Shyamalan’s darkest movies, but it also has a lot of heart in it, and it nails the emotional aspect of the story. I face found the story gripping on the whole. In terms of issues with the writing, it does have Shyamalan’s trademark awkward and artificial sounding dialogue as expected. However at this point I accepted it as a Shyamalan thing, if you’re used to it from his other movies, then Old won’t be too hard to get through. The movie has this general level of weirdness to it but I find that it helps the movie have an off kilter feel to it. There are some moments which are funny but some of those feel intentional. I know that a lot of people will compare Old to The Happening, but the former definitely does things a lot better. The invisible horror certainly works a lot better in Old, perhaps because of the existential nature of the rapid aging in the movie. I will say that the tone is a little messy and all over the place. There is indeed a twist as to be expected from Shyamalan, and I think the twist is just okay within the context of the story, but it is one that I’ll need to think about. It does have a big exposition dump and an odd tonal shift that makes it feel out of place, otherwise I was fine with it.

This movie has quite the talented cast, and I thought that everyone performed their parts greatly. The main family is greatly played by Gael Garcia Bernal, Vicky Krieps, Alex Wolff and Thomasin McKenzie. They had strong chemistry between them and they really felt like a family. The rest of the cast including Rufus Sewell, Abbey Lee, Ken Leung and Eliza Scanlen were also really good in their parts. The performances of the actors playing children who age up quickly (Wolff, McKenzie and Scanlen) particularly do very well at portraying older versions of the children while believably capturing the mentality of the younger people they were hours before. Vicky Krieps, Thomasin McKenzie and Rufus Sewell were the standout performances to me.

M. Night Shyamalan’s direction is really solid, I think this is some of the best work he’s one on a technical level at the very least. He definitely excels at his smaller scale movies, and this is certainly one of his smallest movies, with it mostly taking place on a beach. Speaking of which, the setting of the beach was great and there were some stunning shots, and certainly a notable amount of use of blocking to hide certain things and capture characters’ perspectives. Shyamalan does a lot with the claustrophobia of the setting and being trapped there, much like how the characters feel. Most of the movie doesn’t have anything overtly violent but when it does, it is effective. There’s even a surprising amount of body horror and in those moments, Shyamalan lets it loose and gets more gnarly than I was expecting it too. Finally, the score works very well for the movie.

I have heard some people say that Old is M. Night Shyamalan at his absolute ‘most’, and I can sort of see why. If you aren’t a fan of many of Shyamalan’s movies, there might be some aspects about it that might not work with you, from some clunky dialogue, weird tonal changes, and odd story and technical choices. However, I actually quite liked the movie and found it entertaining, the actors were great, I was invested in the story, and it was very well made. It is definitely a divisive movie, but I think it’s worth checking out. It is possibly among Shyamalan’s best films.