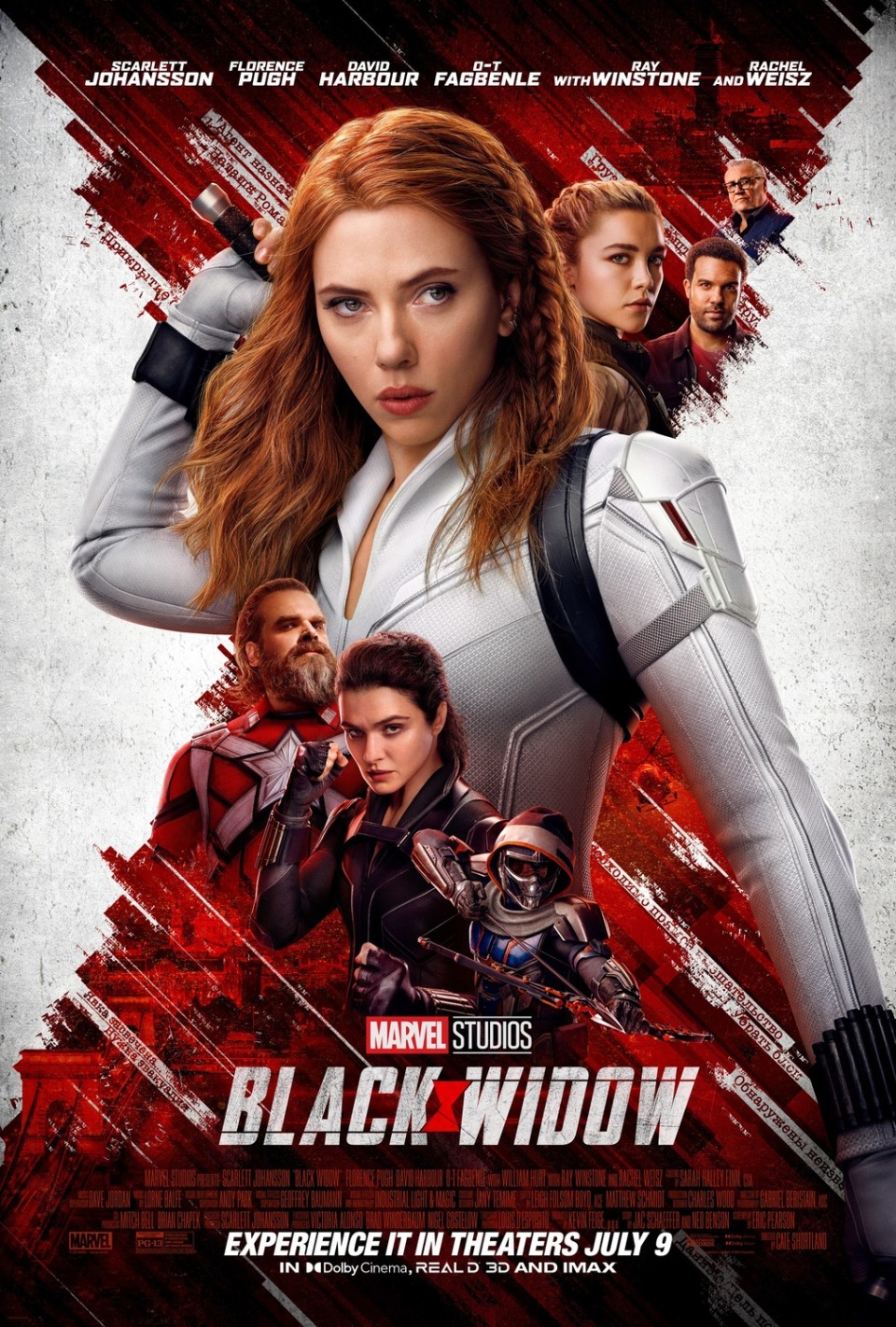 Natasha Romanoff, aka Black Widow (Scarlett Johansson), confronts the darker parts of her ledger when a dangerous conspiracy with ties to her past arises. Pursued by a force that will stop at nothing to bring her down, Natasha must deal with her history as a spy, and the broken relationships left in her wake long before she became an Avenger.

After playing a large role in many entries in the MCU, the character of Black Widow is finally getting her solo film… and it only took 11 years after her first appearance back in 2010 with Iron Man 2. I will admit that I wasn’t the most excited for the film, of course for the fact that it feels a little late given how long she’s been around and hasn’t received a movie of her own. Then of course there’s the fact that the character died during Avengers Endgame, and so having a film take place earlier on in the timeline feels almost a bit in vain and pointless. In the lead up to Black Widow however, I was sort of looking forward to it. This is partly because of being back to see more movies in the cinema but also probably because it was originally meant to come out a while ago, so I’m just glad for it to be finally here. Black Widow was about as good as I expected it to be, with some of the unfortunate problems that I expected it to have, but also surprising in other areas. Overall I enjoyed it.

Plotwise, the movie isn’t anything special, but I was interested to see how it played out. For what it is worth, Black Widow does feel a bit different in terms of the MCU movies. It is something of a spy and espionage movie, and does have some Captain America: The Winter Soldier vibes, which is good as it was one of my favourite movies in the MCU. Of course with this being Black Widow’s solo film, this allows us to learn about her past. The movie introduces us to Natasha Romanoff’s “family” in the characters played by Florence Pugh, Rachel Weisz and David Harbour. This adds a backstory to Natasha’s life before SHIELD showing a side of her we hadn’t seen before. With that comes themes about dysfunctional and unconventional families as expected and I really liked that aspect. There’s a surprising amount of quiet moments that I did not expect, and moments of people just talking. I don’t see this a downside. The first half was probably the strongest part of the movie, without getting into it too much, the opening was especially good. However around the halfway point it starts to decline a little, when it gets into the third act where it has a pretty standard and generic MCU climax. I know that this is typical for most MCU movies but it stands out more in Black Widow because it feels at odds with the rest of the movie. It really pulls you out of it and it’s rather disappointing. 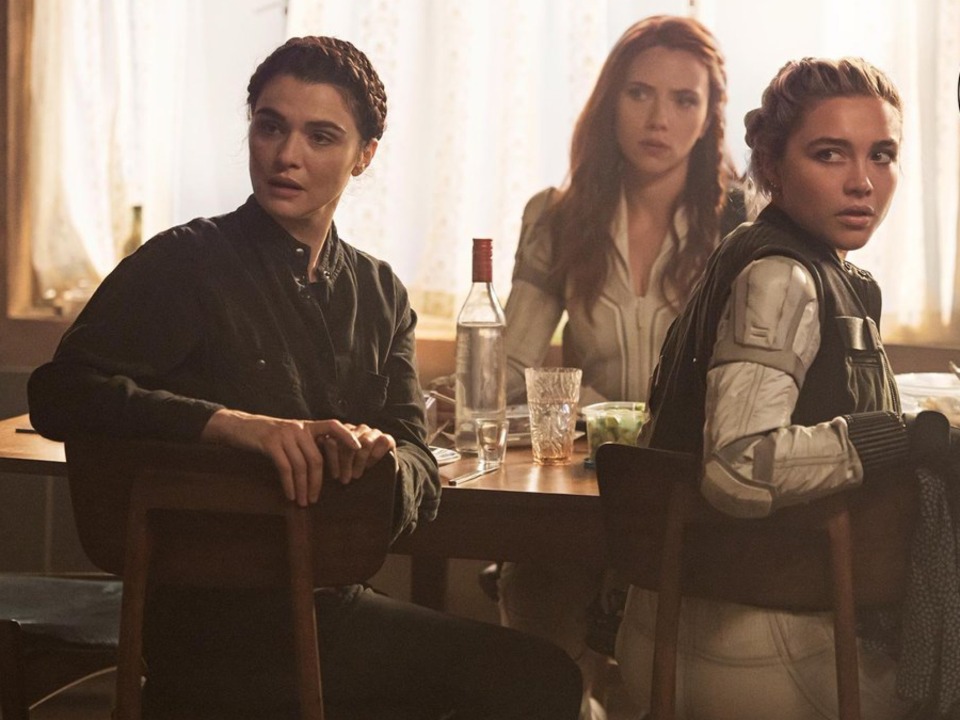 In terms of other writing issues, Black Widow is yet another victim of MCU movies having way too many (and poorly timed) quips and jokes, which end up being at odds with the rest of the movie. There are scenes that are serious and quite dark and then some other scenes which are really comedic and played for laughs, and they don’t gel together. The humour occasionally worked but some of them ruined some sentimental moments or felt forced. It makes the tone feel all over the place. I do have some other issues, part of it was the intent of it being made and the context of the film. This movie takes place right after Captain America: Civil War where Black Widow is on the run, Civil War was released 5 years ago and that’s when the movie should’ve been released. If you showed this movie to someone who are just catching up in the MCU right after they saw Civil War and told them that it was also released in 2016, they would probably believe you. So it almost feels pointless watching it now, especially as you know that Black Widow is going to survive the whole movie. Then to a degree it doesn’t feel we’ve learned a whole lot about Natasha. We’ve learnt some of her backstory but not much necessarily about her as a character. Then there’s the feeling that it was made mainly to introduce another character in the MCU more than actually being for her, like it’s not really her movie. A lot of the film was a setup for Yelena Belova which I’m not necessarily hating as her character is one of the highlights. However it didn’t quite feel right with Natasha/Scarlett Johansson being sidelined in her own movie. It needed to work as a proper sendoff for the character and for me it didn’t do that. There is a mid credits scene, which I think is worth sticking around for.

The cast were one of the highlights of the film. Before this movie, the closest that Scarlett Johansson has gotten to be a lead in a MCU film as her character of Black Widow was in Captain America: The Winter Soldier as a co-lead. So here she finally gets to be in the forefront. I will say that this is definitely her best performance as the character if only because she’s the lead this time (sort of), and generally she’s pretty good here. Florence Pugh is the standout of the movie as Yelena Belova, she’s great, she’s hilarious, and steals every scene she’s in. I’m looking forward to seeing more of her in other MCU projects. David Harbour and Rachel Weisz are also really good, rounding out the rest of the “family”. The interactions between the main family were pretty strong and believable, especially between Johansson and Pugh. The film really suffers from the weak villains, it’s an MCU film so not really a big surprise. Ray Winstone effectively plays the main villain as the head of The Red Room, the main antagonists of the movie. I will say it is refreshing to see a more straightforward evil villain as opposed to yet another attempt at making a sympathetic villain. However despite how much the movie builds him up as a big threat, we don’t really see enough of him for him to make an impact. Usually people in these scenarios would to fix this by compensating by giving the lead villain a strong henchman to have the main antagonistic focus. Which brings me to Taskmaster, who in this movie effectively serves as a Winter Soldier stand in, hunting Black Widow. In the comics Taskmaster is an assassin who mimics people’s fighting styles and that aspect is certainly here. I’m not going to pretend that I particularly care about comic book accuracy. However Taskmaster did feel underwhelming here, somewhat adequate in the action scenes but that’s it, certainly not as impactful as the Winter Soldier was in the second Captain America movie. There is a reason provided behind why the character exists so it isn’t just a random assassin or a robot, but we are not given nearly enough time with them. Even the reveal doesn’t go down well enough to create a memorable impact. Ultimately Taskmaster was more of a sidekick to the main villain, and a rather forgettable one at that. As for the identity of Taskmaster, I figured it out surprisingly early on. 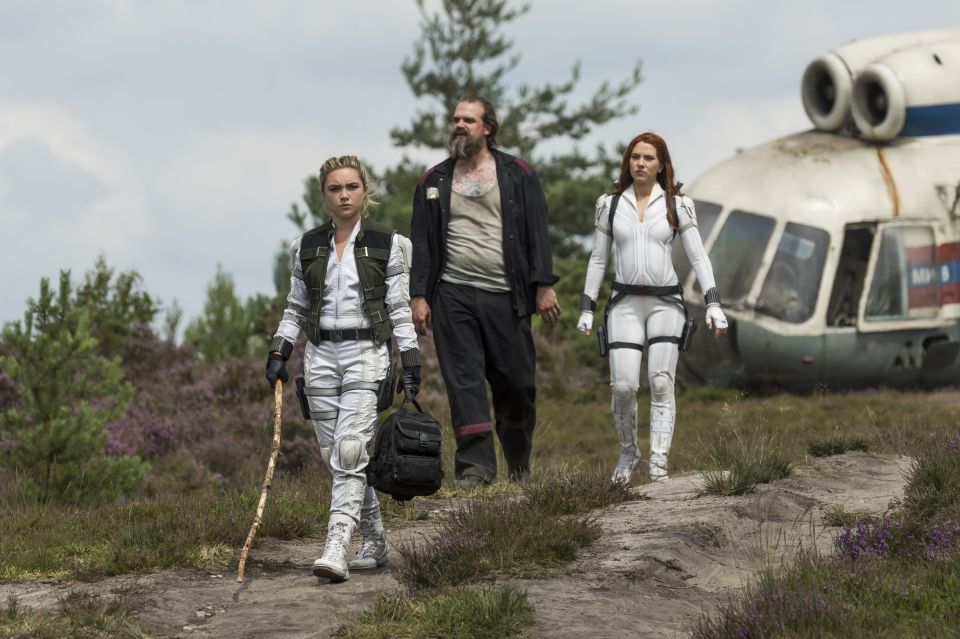 Black Widow is directed by Cate Shortland, and on the whole I think she did a good job, it’s very well shot and put together. The action is generally quite good. A lot of the hand to hand combat is great with some stellar fight choreography, and the sound design really helping with that. It may well be the most brutal MCU movie with regards to the action, you do feel the impact of some of these fight scenes. Where the action suffers is in the third act, with explosions everywhere, over the top scenes, and a whole lot of CGI thrown in. While other MCU climaxes have certainly been more overblown than here, the fact that it’s in this particular movie with very different first two acts makes it feel really out of place. The visual effects are mostly fine and when it gets to the third act they look messy. I’m not going to pretend that it does anything particularly egregious by MCU standards, but it is quite unfortunate to see them fall back on that yet again. The score by Lorne Balfe is pretty good, mostly standing out in the action scenes. Another thing worth mentioning is that this movie actually has opening credits, as in there’s a montage towards the beginning of the movie that’s a credits sequence featuring the names of the main cast and other people who worked on it. Honestly that was rather nice to see in a franchise that hasn’t used them, and this sequence at least tonally gives a hint of it possibly being quite different as a Marvel movie.

Black Widow does have a lot of issues. It is 5 years late, it doesn’t feel like Black Widow’s movie and isn’t quite the sendoff that she deserves. The humour is at odds with the darker story and tone the movie is going for, as is the overblown third act. With that being said, I did still enjoy watching it. I generally enjoyed the action scenes, I was interested in seeing where the story would go, and the cast were quite good in their roles, especially Florence Pugh. It’s at around the midpoint of the MCU for me, if you like the movies I’d say that it is worth checking out.