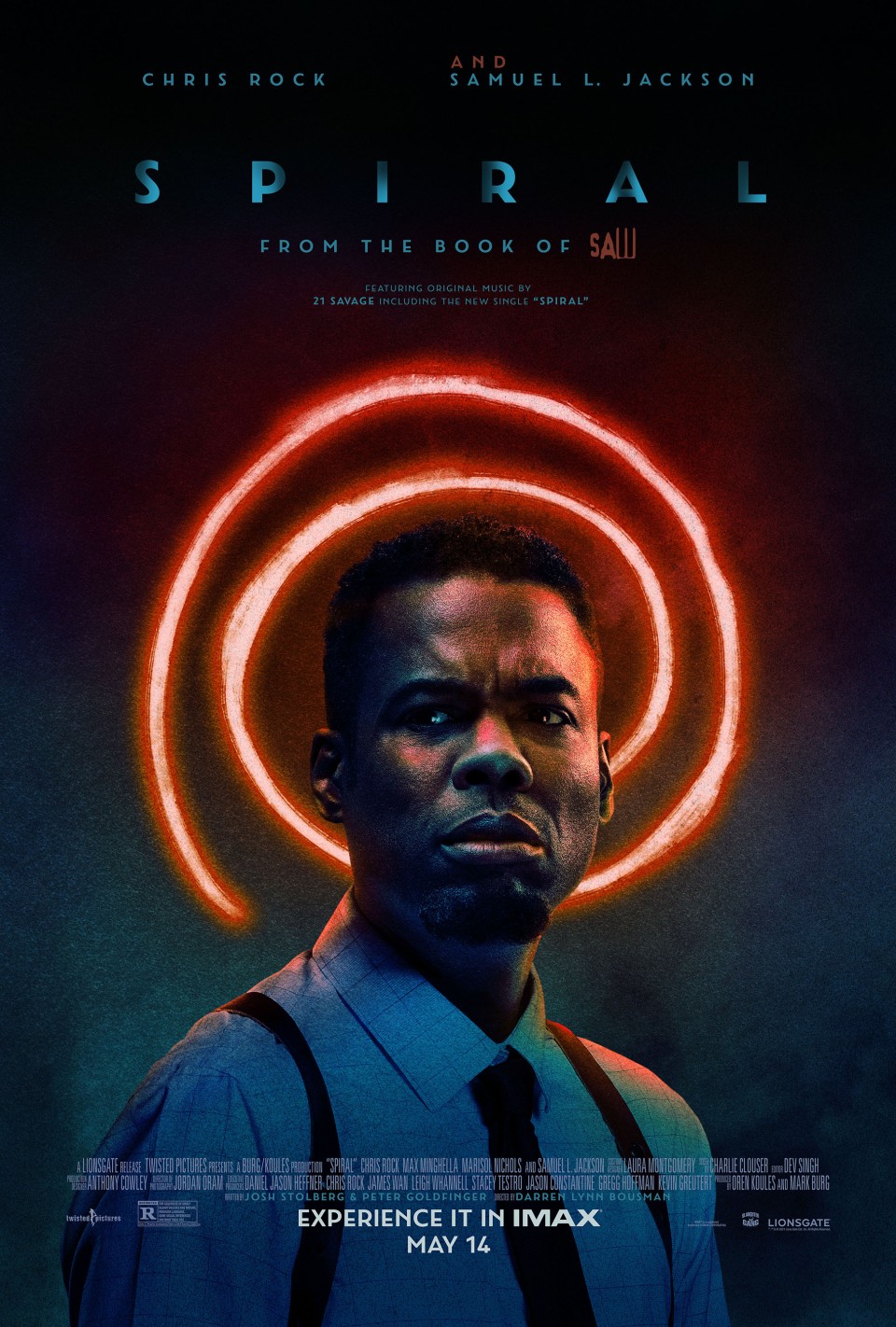 Working in the shadow of his father (Samuel L. Jackson), Detective Ezekiel “Zeke” Banks (Chris Rock) and his rookie partner (Max Minghella) take charge of an investigation into grisly murders that are eerily reminiscent of the city’s gruesome past. Unwittingly entrapped in a deepening mystery, Zeke finds himself at the center of the killer’s morbid game.

Spiral: From the Book of Saw was one of my most anticipated movies of 2021. Having only seen the first three Saw movies last year when it was originally set to release, I was only mildly interested in it. However, I got even more excited for it when I watched the rest of the movies in the series. For all of their faults (and there’s a lot), the movies were quite enjoyable, even considering the lower moments of the series. With this new entry being based off an idea from Chris Rock and having a different approach, it looked like what the franchise needed. Despite some flaws, Spiral is quite a good horror movie and a well needed revival of the franchise.

First of all, getting the obvious out of the way. Spiral may be a Saw movie, but you don’t have to have watched the Saw movies (even the first movie) to enjoy this one. I do think that it is worth knowing what Saw is about at the very least, regarding Jigsaw’s games, the traps, etc. It takes place in the same world, and there are references to John Kramer and his impact is present in much of this movie, but that’s as far as it goes. If you’re a Saw fan, don’t expect to see any past Saw characters or anything, you’ll just be disappointed. Spiral does have some differences from many of the Saw movies. First of all, the plot goes back to basics and doesn’t get convoluted like the sequels did. There’s a serial killer targeting corrupt cops, and much of the movie is Chris Rock as a detective investigating with his partner. It is the first Saw movie to not have an ongoing game running throughout the movie, even the first Saw which had a good amount of the movie being flashbacks while the main story focusing on the game in the bathroom. In some ways it takes more from Se7en than Saw (ironically the latter took a lot of inspiration from the former). There is definitely more humour in the mix especially in the first act, particularly within the dialogue. It actually does work quite well all things considered, and it does give it a distinct tone from the other movies. Another way that this movie is different in the series was the social commentary and themes. Saw VI made itself stand out with its take on health insurance, and no other Saw film had been that clear about being about something until Spiral, which this time takes on corrupt cops. It was refreshing to see, and I really liked the angle. However, don’t expect a deep dive or analysis about the subject matter, if anything I wish they went deeper into that and spent more time with it.

Something Spiral does have in common with the first Saw was the use of traps, with traps being the most (in)famous aspect of the movies. Now there isn’t a huge number of traps in Spiral, instead focusing more on the actual investigation. With that said, the traps are definitely prominent in this movie. Unlike some of the sequels, the traps in Spiral are purposeful, and they actually have a meaning behind them. Overall, I was invested with the story and interested to see where things would go, even if I do feel like it could’ve been a little more. However, there are some story and writing faults. The dialogue can either be a bit sloppy, or very expositional and forced. It does fall on some familiar tropes, both for Saw and cop/crime thrillers, it even has the classic trope of the older cop who gets a younger partner. As said earlier, this could’ve done a little more with its take on corrupt cops, the runtime is 90 minutes, so it could’ve spent more time with that. Some parts of the plot are predictable, and you can figure some twists out, especially if you are familiar with previous Saw movies and twists. All I’ll say is that with regards to the killer, I was more interested in the why than the who, and I kind of wish more time was spent with that. As for how it serves as a soft reboot, I’m interested in where the series could go from here, especially with where the film ends on. 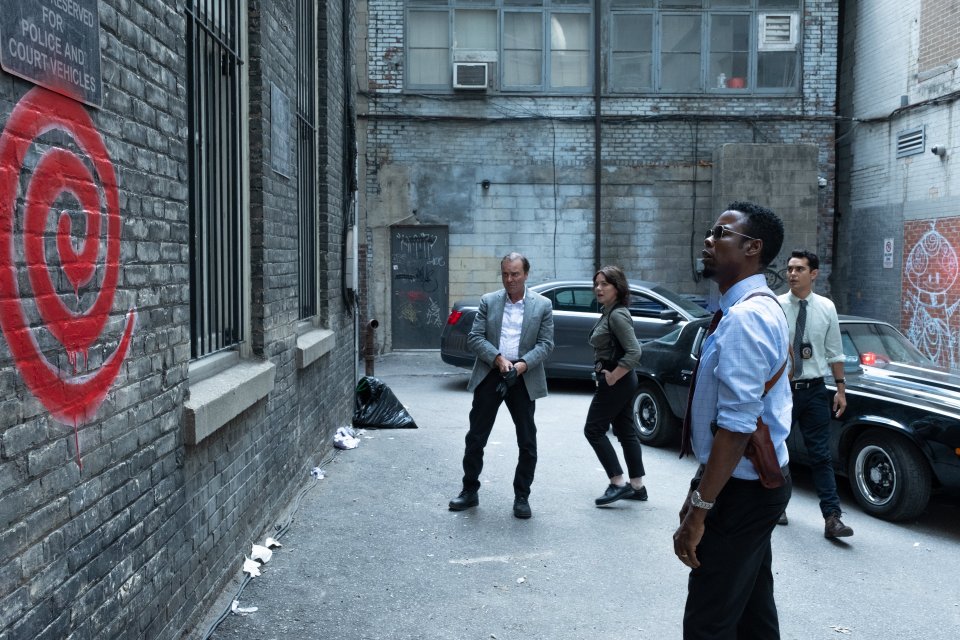 The acting is pretty good generally. Chris Rock leads this movie as lead character Zeke Banks, and he’s yet another case of an comedic actor taking on more dramatic work. Despite some moments of overacting, he actually does a pretty good job and is believable enough. Yes he acts like how you’d expect Chris Rock to act as a cop, but he does make for one of the more energetic and standout Saw protagonists thus far. Max Minghella plays Zeke’s partner, and the two actors are great and have a strong dynamic on screen. Samuel L. Jackson is also in this movie as Zeke’s father, who was once a police chief. He’s not in the movie as much as you’d think he would, but he does play a vital role, and he acts his part well.

This film is directed by Darren Lynn Bousman, who previous directed Saw II, III and IV. It is interesting that one of the main people who shaped what the Saw series would become would be the one to return to helm the entry which would revive the series with a distinctly different take. His work in this movie is quite good, it’s probably the most polished Saw movie on a technical level. The look of the movie is great. The original 7 Saw movies had this grungy 2000s look to it. Jigsaw in 2017 did give it a new and modern look, however it almost looked a bit too separated from the previous movies. Spiral has a happy medium of the two, looking modern and also looking grimy and gritty. The use of colour is also pretty great and makes it stand out from the rest of the series in a good way. The editing is also balanced well. It is fast paced especially during the trap scenes, as per usual for the Saw movies. However it doesn’t get obnoxious. I would be lying if I said that the traps in this movie would rank among the best or most memorable of the entire series. However they are good, creative, and fit the tone and overall story incredibly well. They are definitely on the more realistic side (more Saw 1 than Jigsaw or Saw 3D) and are more grounded. It’s also no slouch when it comes to the gore, with some truly gruesome moments, and the use of practical effects is great. Charlie Clouser, who composes the scores of every Saw film, returns to compose the score of Spiral. The score is good, and sets itself apart from the other movies, and yes, some familiar sounding themes from the series do make a comeback. 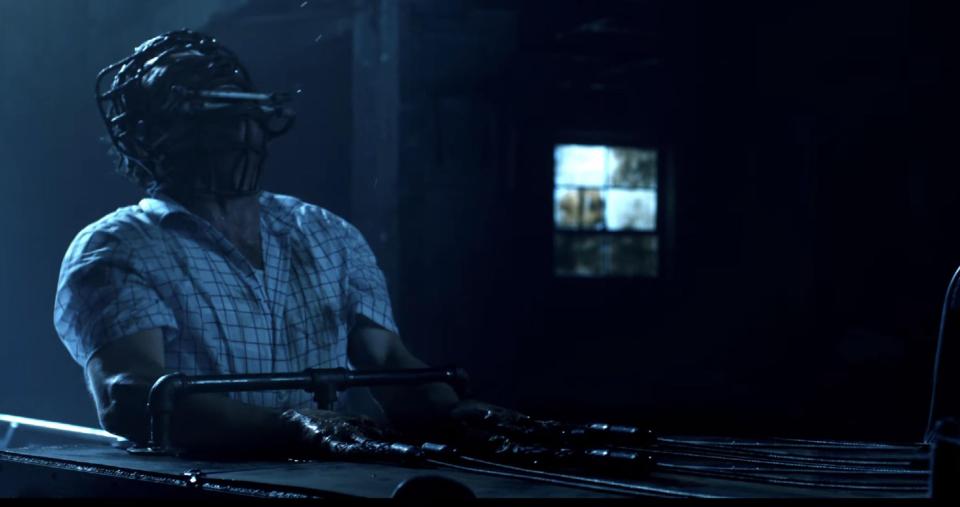 Spiral: From the Book of Saw is really good. It has a fresh take on the series, it’s solid on a directing and acting level, and I was interested throughout. It’s not the best movie in the series, there’s at least a few Saw movies I would consider to be better (including the original film). However it is one of the better movies in the series for sure. As for whether you’ll like it or not, long story short, if you watched some of the Saw movies and you didn’t like them any of it, this won’t change your mind. If you are a Saw fan, I don’t know for sure how you’ll feel about it (definitely depends on what you’re expecting/hoping for), but it is definitely worth watching. If you haven’t seen the Saw movies but are familiar with the concept and want to watch Spiral right now, you can jump right into it without a problem. As a fan of the Saw series, I’m pleased with the movie and I’m looking forward to seeing where the series goes from here.