Maud (Morfydd Clark) is a reclusive young nurse whose impressionable demeanour causes her to pursue a pious path of Christian devotion after an obscure trauma. Now charged with the hospice care of Amanda (Jennifer Ehle), a retired dancer ravaged by cancer, Maud’s fervent faith quickly inspires an obsessive conviction that she must save her ward’s soul from eternal damnation, whatever the cost.

I heard about Saint Maud for a while now, I knew that it was some highly anticipated horror movie from 2020 that was well received from critics who got to watch it earlier that year. I went in only that and that the plot had something to do with religion. I finally watched it after waiting so long for the opportunity to do so, and I thought it was great.

First thing you need to know about Saint Maud is that it is a psychological horror. It’s definitely in the horror genre, but there are like next to no jumpscares here. It is more creepy, disturbing and unsettling than actually scary. The horror (in the conventional sense at least) doesn’t come into the movie for some time, and there’s probably not as much as some genre fans would like. It’s very much not intense terror that you should be expecting, but rather a creeping sense of dread. It is also a slow burn and moves at quite a steady pace (especially for the first 40 minutes or so), but I was nonetheless invested throughout. I won’t spoil anything about the plot, it’s best going in not knowing too much. Saint Maud is a character study of the lead character Maud, and her arc is compelling. We mostly see the whole movie through her perspective, and over time we learn about her dark past and her devotion to her religion. The movie at its core is a look at religious fanaticism, mental illness, loneliness and isolation. Many have said that it’s like First Reformed meets The Exorcist, and I can see why. Throughout much of the movie, there’s narration from Maud as she’s praying to God. While narration from the lead character is often overused in movies and can be lazy or expositional, we get an insight into her thoughts. It also sort of adds a level of uneasiness as we learn the places that Maud are at mentally. There’s a lot of ambiguity and unpredictability and that makes the movie a bit unsettling. Without getting into it too much, the third act is insane, and some bold decisions are made. Saint Maud is short at under 90 minutes long but I think that was generally the right length. Again it’s slow moving but every scene is well used. With that said, I think that there was something missing for me. I think it could’ve afforded to been at least 10 minutes longer to expand a little further on its themes.

The acting from everyone in the movie is great, including Jennifer Ehle in the most prominent supporting role as the retired dancer that Maud is caring for. However it’s Morfydd Clark as Maud who shines the most, in one of the best aspects of the movie. Her performance is amazing and mesmerising, and she is a captivating presence throughout. Something to note is the range that she has and how quickly she can shift from one thing to the other with ease. Something she does well is make us sympathise for her, while making us equally scared of her.

Rose Glass directs Saint Maud, and her work here is outstanding. It’s a very strong, precise and confident debut from her, and I’m interested to see what she makes next. The movie is visually stunning with its gloomy and darkly lit cinematography, memorable imagery, and some effective production design. There’s also some excellent sound mixing and an effective soundtrack. The score from Adam Janota Bzowski is very atmospheric and chilling, ranging from being creepy and sinister to being booming and invasive. With all its technical elements, it builds suspense and tension effectively, and for the most part doesn’t rely on jumpscares. 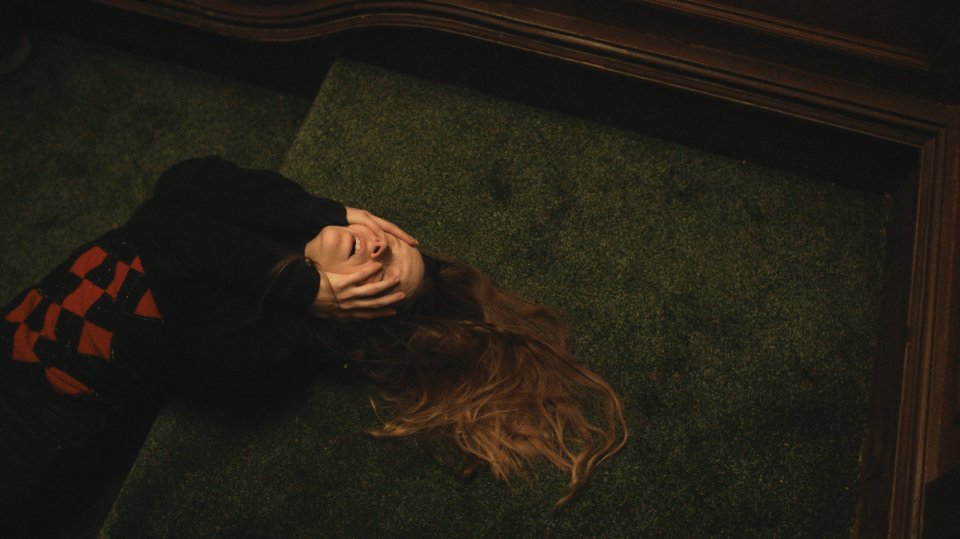 Saint Maud is a short and simple yet effective and intimate psychological horror film. I was invested throughout, Rose Glass’s direction is confident and bold, and the movie is led by a chilling and fantastic performance from Morfydd Clark. If you are a fan of horror I do think that it’s worth watching. I will say though that it’s best to manage your expectations before watching, because I have seen some people disappointed after going in with all the hype and I can get why. But I thought it was great.