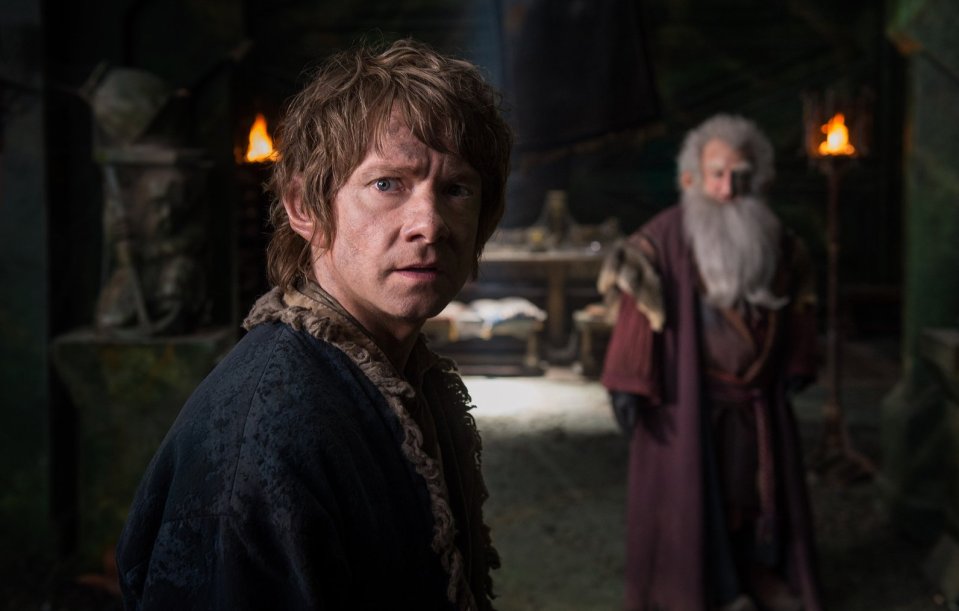 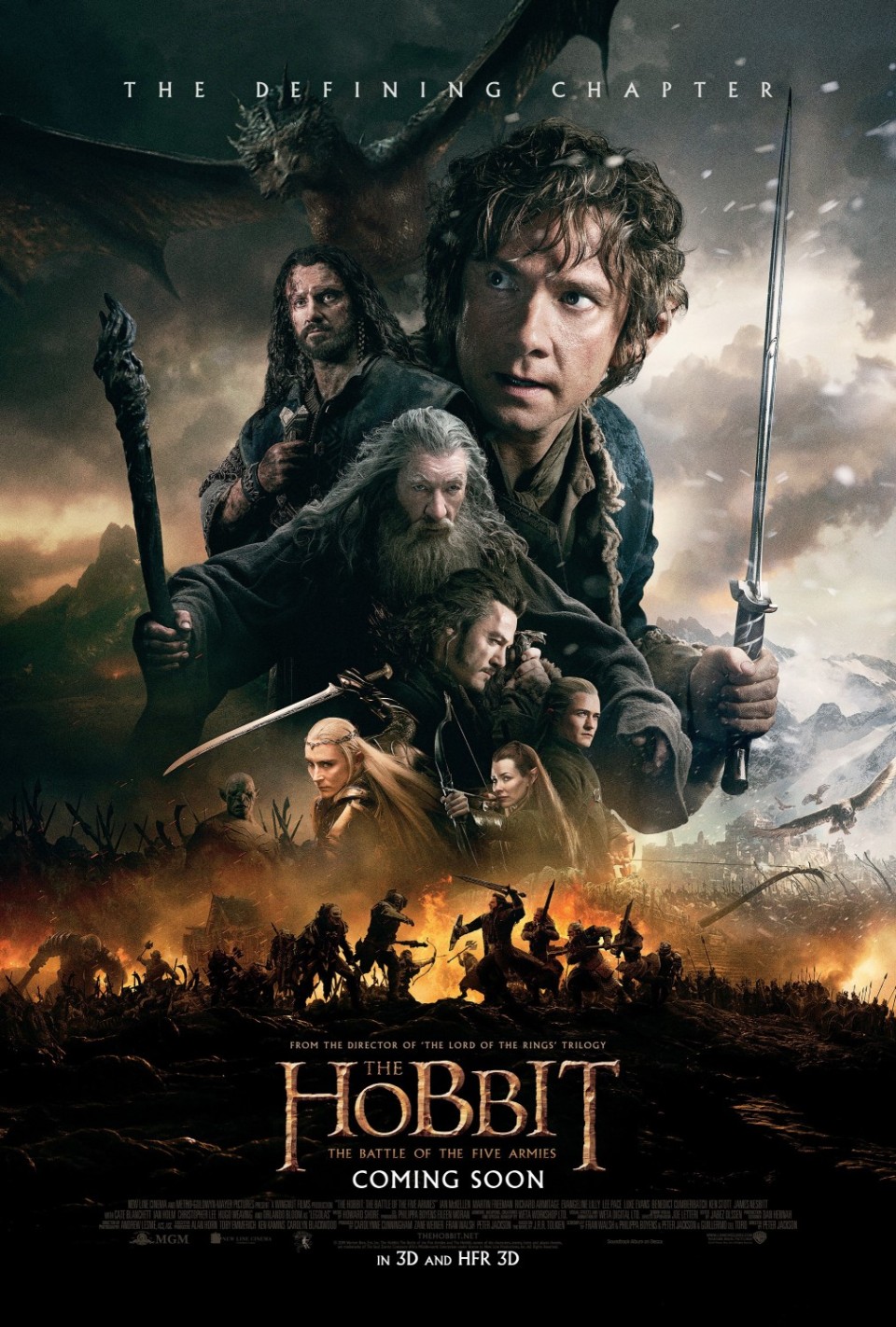 Having reclaimed Erebor and vast treasure from the dragon Smaug, Thorin Oakenshield (Richard Armitage) sacrifices friendship and honor in seeking the Arkenstone, despite Smaug’s fiery wrath and desperate attempts by the Hobbit Bilbo (Martin Freeman) to make him see reason. Meanwhile, Sauron sends legions of Orcs in a sneak attack upon the Lonely Mountain. As the fate of Middle Earth hangs in the balance, the races of Men, Elves and Dwarves must decide whether to unite and prevail — or all die.

While I like The Hobbit movies, The Battle of the Five Armies has a lot of issues and is arguably the weakest of the trilogy. Despite many of the problems I have however, I’d say that it works well as a conclusion to the overarching Middle Earth story. 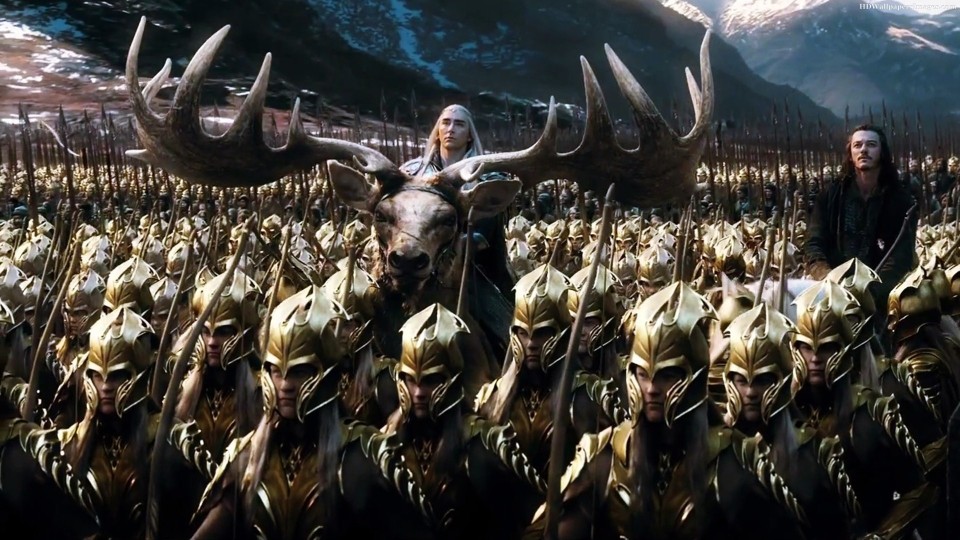 Director Peter Jackson said that there was enough content to justify three movies, and having seen The Battle of the Five Armies I have to disagree. There are two main events, the battle at Laketown with Smaug and the whole final battle which fills the remaining running time. The narrative focuses on these two major events left in the story and how it bridges them. Smaug is dealt with in the first 15 minutes and while it was well handled, it’s pretty clear that it should’ve been put at the end of The Desolation of Smaug. So the movie is pretty much just about the titular battle and as you can tell, the whole movie is mostly this is one big battle. Leading up to that point, they are really building up this battle. However it doesn’t feel grand and important and epic like it was trying to be. It’s not a problem with the first two movies because those were smaller scale for the most part, but The Battle of the Five Armies is trying so hard to be something big, but it doesn’t work. You don’t care about the large scale stuff but the movie is definitely leaning more towards that than its characters. There is a bit of an emotional disconnect from the story and characters, it certainly doesn’t help that you can figure out most of what happens, it doesn’t actually feel like there are many stakes. When the camera shows a big battle with none of the main players being a part of it, you wonder what the point of it is. If Jackson really wanted to stretch the movies into three, along with the movie being largely about the battle, there’s other opportunities to add some other character building moments or something similar. Unfortunately, some of the characters that have been built up and introduced over the previous two films are squandered in mere cameo roles. It feels like a lot more of the runtime should’ve been spent with characters and their interactions, especially Thorin. Thorin’s madness and greed is a notable plotline, more scenes developing that would’ve been better, and it would suit the darker approach well. There was potential there, there’s some great scenes involving Thorin and Bilbo. Unfortunately, Thorin’s storyline of a man driven to greed is played oddly camp and over the top, and it loses any of its edge and effectiveness, you don’t even really take it seriously. When it does get to the third act, it focuses up a little more onto characters we actually know (as opposed to random CGI creations), and the conclusion was satisfying enough. 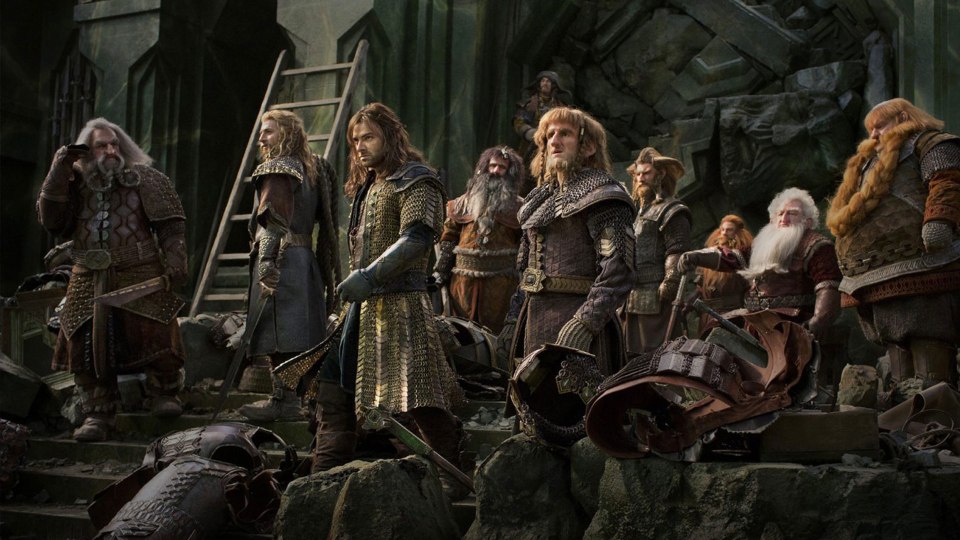 By the time it gets to The Battle of the Five Armies, it’s even more clear that we aren’t really watching an adaptation of The Hobbit, it may bother some but as someone who never read the books I was fine with that. It does try to add as much Tolkien lore as possible. It does feel like fan fiction but with fiction from a fan comes passion, and you can feel the passion throughout. Hence why I’m not with the people calling the movie a cash grab. With that said, it can get a little silly at points, such as Gandalf’s first scene. The movie often tries to throw references to the LOTR trilogy which serves no purpose and felt cheesy and placed into the screenplay to get a reaction from the audience. They don’t really add anything and almost felt lazy at points. As someone who loves The Lord of the Rings trilogy and really likes the first two Hobbit movies, I do wonder what happened with some of the decisions made here. So much of this movie is over the top ridiculous. The Hobbit movies had that and even the Lord of the Rings trilogy had that, but some moments are so silly and goofy that it almost became fascinating, like Peter Jackson is actively trolling the audience or something. At a point I just sort of accepted it but it is beyond jarring. I wasn’t expecting so much stilted and awkward dialogue from characters, I’m not really sure what happened there. The comedy is kind of ridiculous too, I generally like the comedy in the other movies but it’s so over the top here. There’s even a comic relief character that the film keeps cutting to for some reason (and no he’s not funny). While I consider the extended cuts of the original Lord of the Rings trilogy to be the defining versions of these movies, The Hobbit movies are fine enough without them, especially the case with this one. I watched the extended cut, and like with the other Hobbit extended cuts, some new scenes are great, other scenes feel like filler. 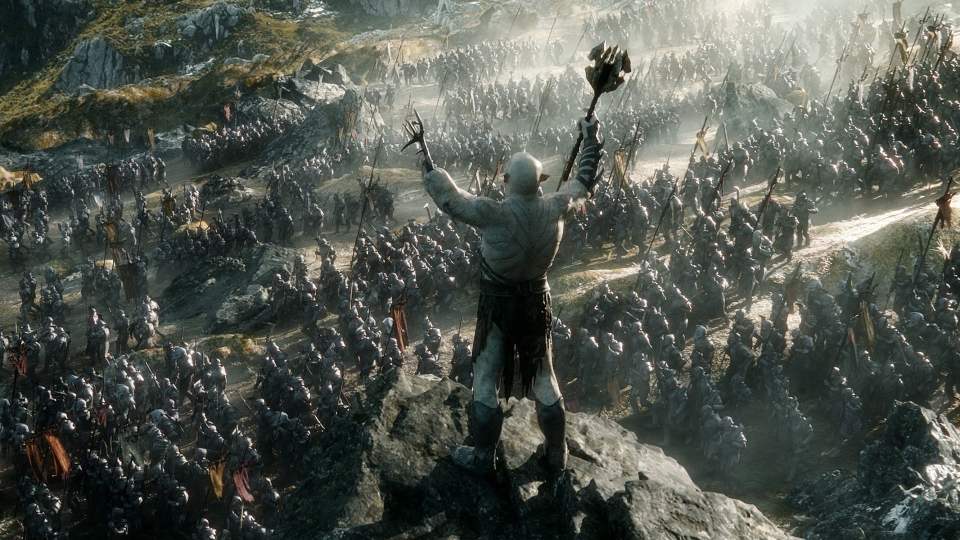 The cast from the past Hobbit movies return, and they are generally pretty good here. Of the characters, Bilbo and Thorin get the most focus, much of the other characters are neglected. Their dynamic is great, but I wish they got a lot more to do. Martin Freeman is good as always as Bilbo, but he doesn’t get to do a whole lot, especially compared to the past movies. Richard Armitage is great as Thorin, especially as it’s going towards the greed storyline involving him. As said before though, I wish the storyline was handled better because it had a lot of potential. Other actors like Ian McKellan, Luke Evans, Orlando Bloom and Lee Pace are good in their parts, though don’t get much chances to shine. A distraction character is some side character named Alfrid, who pretty much serves as some random comic relief. He was the deputy of the Master of Lake-town (Stephen Fry) in the last movie, and he was okay in his role. If they really wanted one of the two characters to be the comic relief in this movie, I wish it was Stephen Fry instead. Apparently the reason he is in this so much is because they liked the actor Ryan Gage, and I’m not sure about that reason, because he’s quite annoying in this movie. He’s fine for the first two scenes but they keep giving him scenes. He’s not funny, he doesn’t evolve or change over the course of the movie, and he doesn’t really add anything to the movie. He even dresses up in a corset to pretend to be a woman at a point, and by that point, you just really wonder what Peter Jackson and the rest of the writers were even doing at this point. He gets even more screentime in the extended cut, so if you wanted more reason not to watch that version, there’s that. One surprising addition to the last Hobbit movie was Tauriel, played by Evangeline Lilly, who was quite good. One part relating to her that I didn’t like however was the romantic subplot with her and Kili, it wasn’t really convincing and was a bit of a distraction, but at least it was a small part. In this movie however they leaned even further into that melodramatic subplot, and the romance and the dialogue relating to it can get very soap opera-like, and not in any enjoyable way.

I’ve generally thought Peter Jackson’s direction of The Lord of the Rings and The Hobbit movies have been great, and while I liked some of his work in The Battle of the Five Armies, it has issues. Something about the look of the movie is off, particularly here even when compared to the past movies. It’s got this overly glossy look to it. The Hobbit movies’ effects get worse with every instalment, which means it looks the worst here. Not that it’s all bad, some aspects like Smuag still look fantastic. Where you mainly notice the visual effects issues are in the action scenes, and that’s probably why some of the visuals of the film look quite off. The overuse of CGI and green screen really distracts and makes it a bit of a mess, with far too many sweeping shots of CGI landscapes, townships and castle-rubble. Those types of scenes stood out as looking a bit fake in the other two movies, but at least it wasn’t constant. This movie is mostly a big battle movie however, so they stand out a lot more. It already feels jarring with the past two movies not really being battle movies at all. The action scenes for the most part are good, there are some great set pieces like the opening sequence with Smaug. Each set piece tries so hard to top the next, with large environments being destroyed. A lot of it is really over the top and silly, even by Jackson’s Lord of the Rings standards. Stuff like Legolas jumping up on falling debris is straight out of a video game, in fact any action scene with Legolas takes the edge of the battle scene with his plot armour, though they are undeniably entertaining. A lot of the action doesn’t really have any impact and just feels like computer people attacking each other, mainly because it is. In fact, you could keep some action scenes in and remove others and it wouldn’t change much of the plot at all. The music from Howard Shore is unmemorable but fitting. 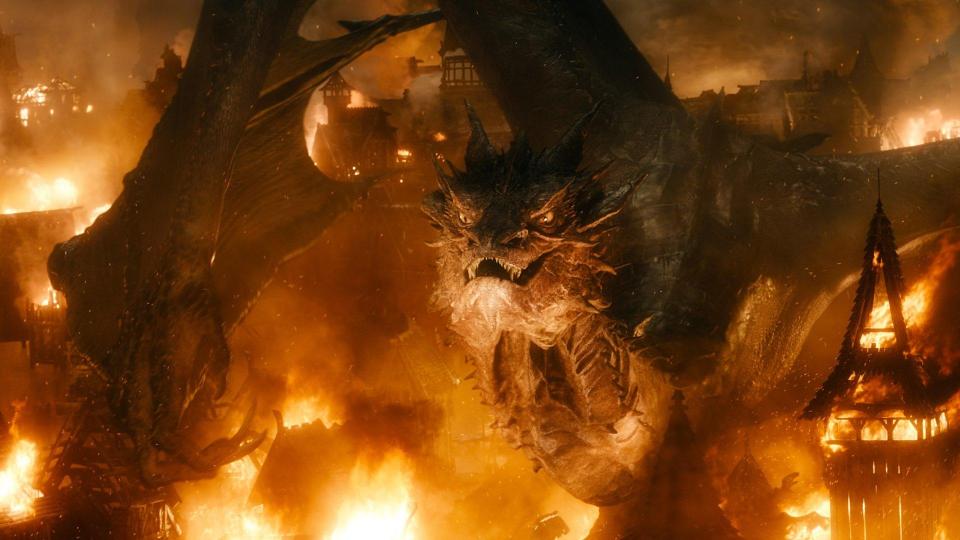 I still like The Battle of the Five Armies but it’s by far the worst instalment in the Middle Earth series. It doesn’t do enough to justify the Hobbit movies as needing three films to deliver the story, and has multiple issues on writing and directing levels. If you didn’t like the previous two movies, you definitely won’t like this one. With that said, I do like it. It has some good moments, the action is gloriously over the top and entertaining, and I enjoyed watching it. I just wish it was much better than it was.