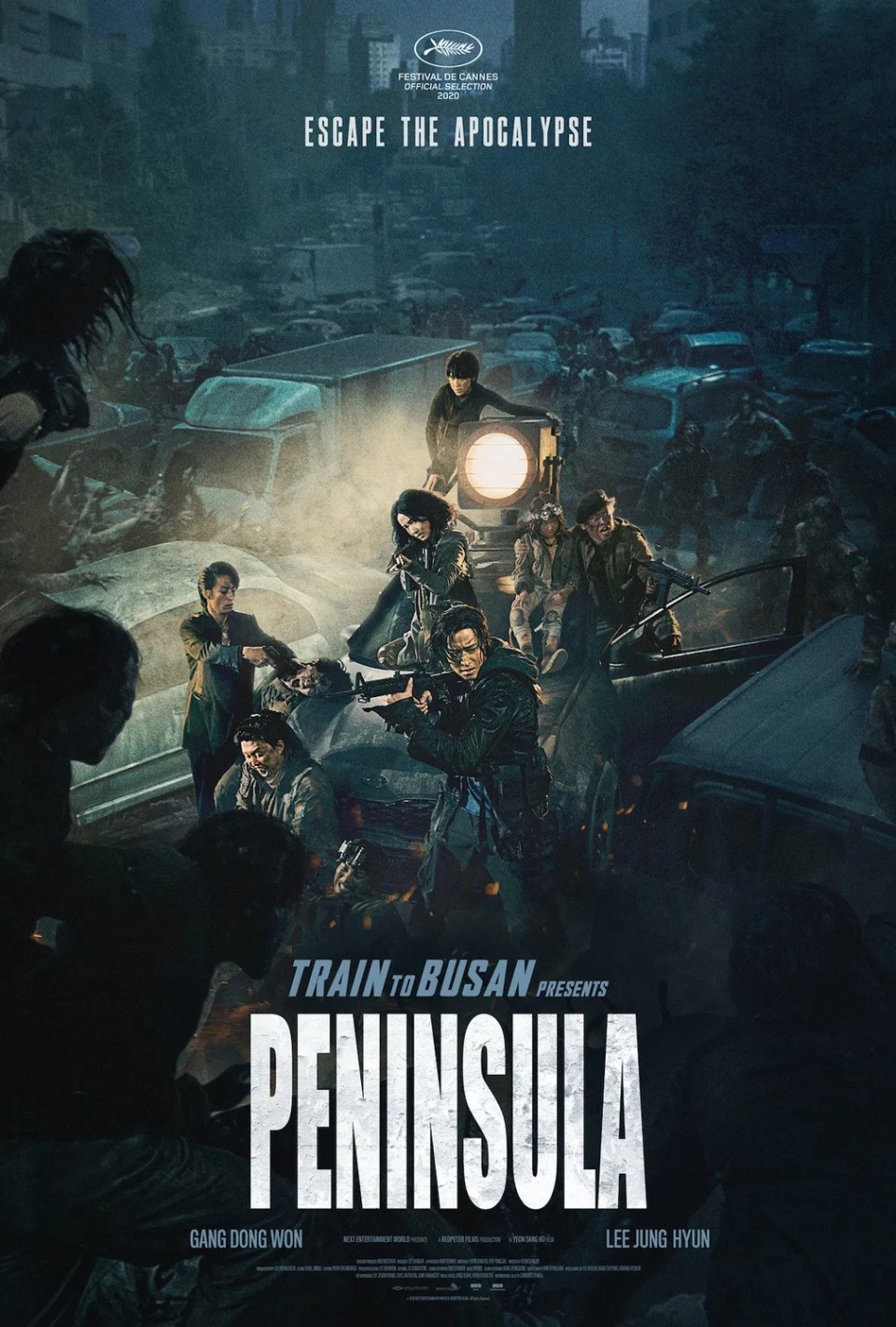 A soldier (Gang Dong-Won) and his team battle hordes of post-apocalyptic zombies in the wastelands of the Korean Peninsula.

I’m not a huge fan of the zombie genre, but Train to Busan is by far my favourite movie in that genre. Despite the setup being quite typical of zombie movies, the character work and realistic and unique take on a zombie movie, on top of the excellent direction, made it stand out. I, like others, were very sceptical about the prospects of a sequel. With that said, the fact that it would be directed by Yeon Sang-ho, who made the first movie, had me holding out hope. Despite the new emphasis on action from the trailers and the mixed response critically, I went in open minded. Peninsula ended up being a disappointment to me, but I did still find some enjoyment in it.

First of all, what must be addressed is the movie’s connection to the first Train to Busan. The sequel is mostly set 4 years after the events of the first movie, what happened there is referenced in this movie but it’s mostly a standalone movie in plot. Peninsula very much its own movie in so many ways. You could call Peninsula the Aliens to Train to Busan’s Alien, a sequel to a horror movie that has more emphasis on action. Now I knew this going in, but I can’t deny that it did end up working against my enjoyment, as much as I tried to separate the two. Now I didn’t necessarily want a repeat of the first movie, and I did like the initial premise. At its core however, Peninsula is a typical zombie action movie. It wouldn’t be so bad if it wasn’t a follow up to a movie that subverted zombie tropes, because Peninsula falls right back into those tropes. The moment the kids characters get introduced in the movie, that’s when the tone changes immensely to one of silliness. The writing and storyline are also noticeably weaker and predictable, with some really bad dialogue. There are also some seriously dumb moments in logic, stuff that would be in a lower tier Resident Evil movie. It’s hard to stay invested in the movie generally. It does aim for some hard hitting emotions just like in the first movie. However it doesn’t really work, with the storyline and especially the characters which aren’t particularly well written. So when it really tries to do this at the end, it just doesn’t work at all.

The acting is generally good but it was very dependent on the writing of the characters. One of the biggest surprises of the first Train to Busan was the realistic and well realised characters, so when things happened to them, you actually cared. In Peninsula the main characters were okay, albeit very underdeveloped, felt like stock zombie characters, and you don’t really care about them. The villains are generically and cartoonishly evil and it’s difficult to take any of them seriously.

As I said, the movie was made by the director of the first Train to Busan. The cinematography was good, and the production design was effective. A big part of the movie is the action. In the first movie, the characters didn’t have any real weaponry, which made the confrontations all the more tense and thrilling. The characters in this have guns however, so that already removes so much of the tension, there is basically none throughout the entire movie. The action is very over the top, with lots of guns firing, and you see a lot of humans fighting other humans. What I wasn’t expecting were the vehicle sections, which had some really bad CGI, making them look like something out of a Looney Toons cartoon. They felt like something out a Fast and Furious movie, even if it seemed like it was trying to be like Mad Max. Speaking of bad CGI, the CGI on the zombies also look bad. In the first movie, there were little to no CGI on the zombies, just mostly acting and makeup. In Peninsula, the zombies with makeup look quite effective. When they are represented by CGI however (usually when there’s huge crowds of them), it’s like you might as well be watching World War Z. With all that being said, there are some good action set pieces, and a number of them are quite entertaining, albeit very video game-ish.

Train to Busan: Peninsula is a bit of a mixed bag to say the least. It is a typical zombie action movie, with some really flawed writing, and a vast change towards being over the top action. On its own it’s fine, but it is so hard to separate it from the first movie. At the same time, it is directed well generally, and has some entertaining moments. If you liked the first movie, you still might like this one too, but you really have to manage your expectations.